After a few weeks of blasters with a good amount of packs... I get to this one... 08/09 Be a Player. These Be a Player blasters only contain two packs within, but there is a guaranteed autograph in one of those packs. That fact alone makes opening up this blaster have a bit of excitement to it. Will I get a big name NHL superstar, or will the player I get be a scrub who's already out of the league? We'll see really soon. I gotta say that my last BAP blaster left me wanting. Hopefully I fare better this time! 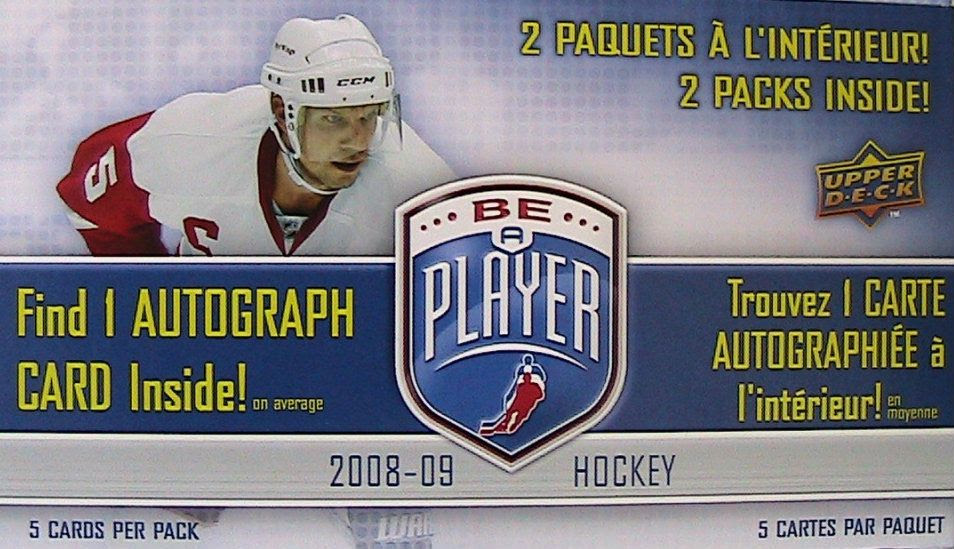 The entire point of getting a blaster of Be a Player is the chance at an autograph. That's it. Nothing else to it. Even looking at the front, it says, FIND 1 AUTOGRAPH CARD INSIDE. Upper Deck knows what's up. Everything else doesn't really matter... but there is always the possibility of getting some sort of insert or rookie card. And in fact, the Be a Player rookies are very limited - only 99 of each. But of course that means they are near impossible to get.

As blaster boxes are primarily sold to large chain stores, there were many people likely to have seen these on the shelves. For non-collectors, I'm sure there was a huge curiosity as to who's autograph they could get in one of these boxes - could Crosby, Ovechkin, or Malkin be inside? Everyone knows that an autograph of a famous athlete is a desirable item. I'm sure these sold well, and perhaps even got some new people into the hobby.

For the hard-core collector, I think it's nice to be able to get something of value at someplace like Target  or Wal-Mart. There just aren't too many 'higher' or even 'upper-mid' range products that come in blaster form. It's too bad that Be a Player is no longer produced. It was a great set of cards that could be enjoyed by both people in and out of the hobby.


Review -
This break was over in two snaps of a finger, but it was still fun. The autographed card came in the first pack I opened. Though not a huge name, at least I got someone who I know and who plays for the Sharks! That was pretty cool. It's definitely a card I could add to my personal collection.

As for the rest of the cards, I was underwhelmed. The 08/09 BAP base design doesn't impress. Basically the cards feature two of the same image of the player - a standard action photo, and in the background, the same photo as it could appear on a jumbotron. I would have preferred to just have the natural background rather than this jumbled look. Too bad. These cards really could have been really sharp and clean.

Not too many cards to choose from this week, but here are my top three: 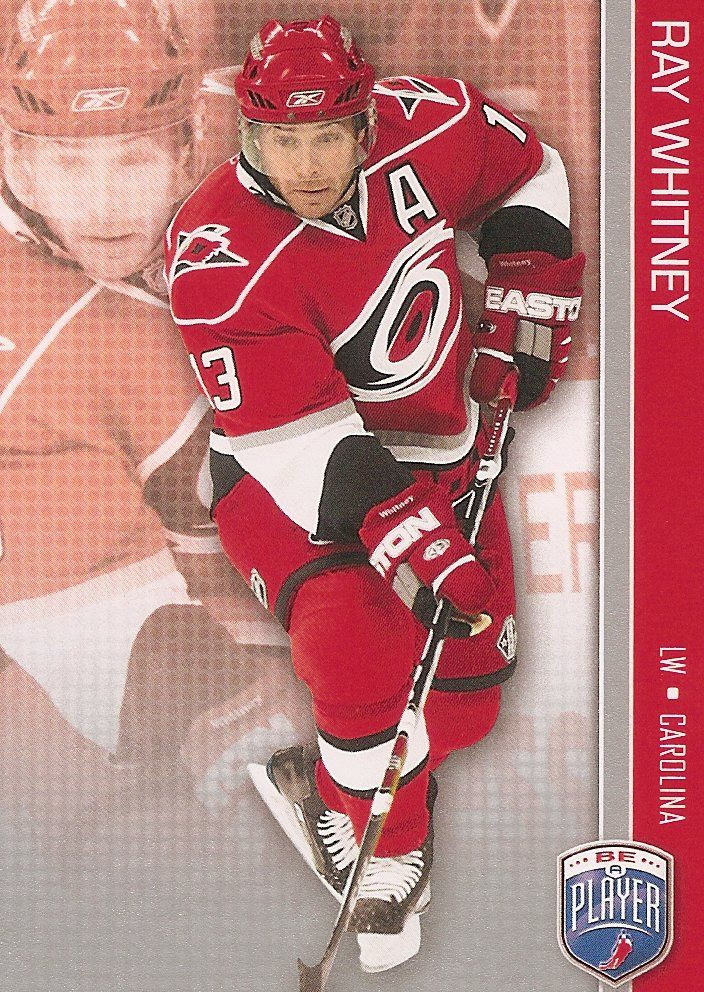 #3 - Ray Whitney Card No. 32
Well, I had to choose 'The Wizard' as my number three card as he was a former Shark! Whitney has played on many teams in his long career. Though this card shows him in Carolina gear, his most recent stop has been in Phoenix where he has continued to be a productive player. It's amazing to see him still in good shape after all these years! 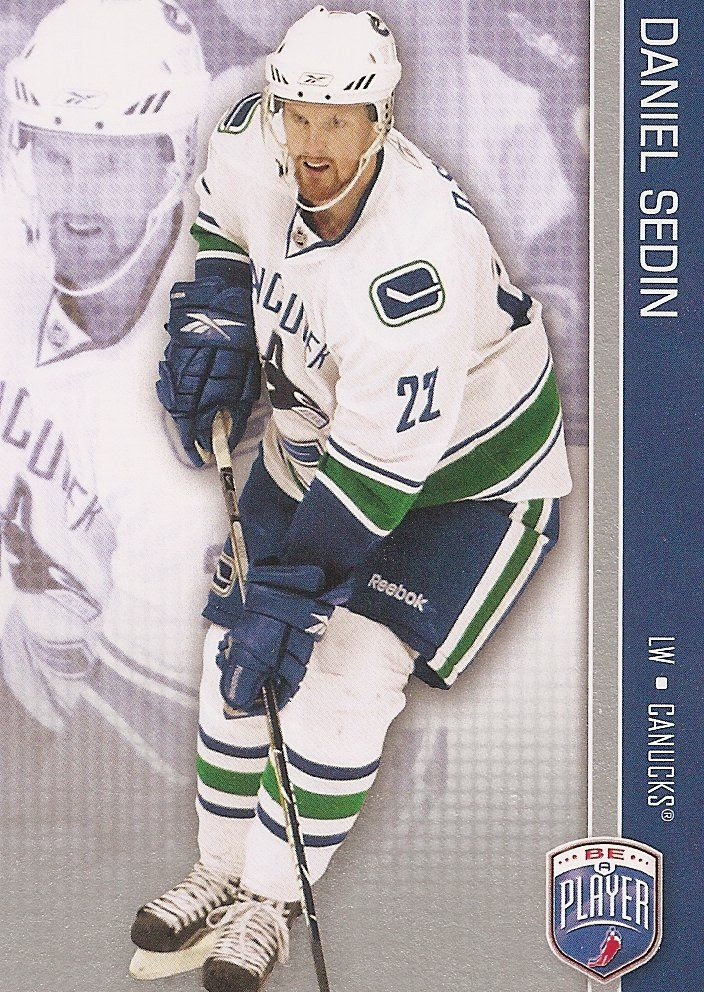 #2 - Daniel Sedin Card No. 171
It's hard to pick a Canuck to be in the top three, but Daniel Sedin was the closest thing to a star amongst all the cards I opened up in the blaster. 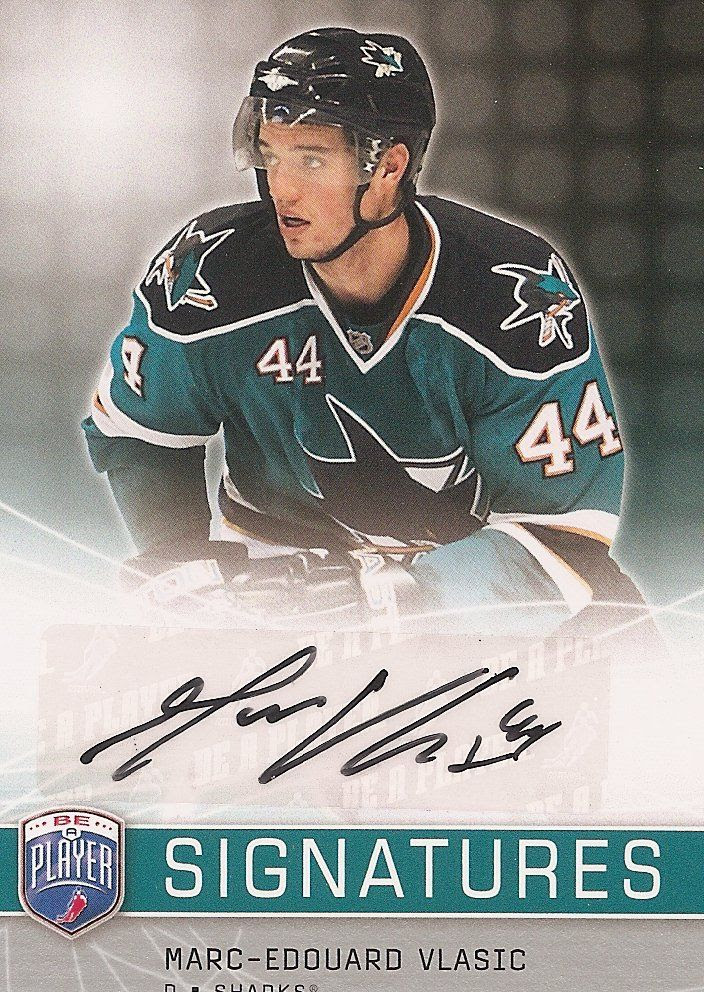 #1 - Marc-Edouard Vlasic Card No. S-MV
What a nice surprise to see a Shark come out of the blaster! Marc-Edouard Vlasic is a very good defensemen - but underrated because he plays in San Jose. Because of those two factors (playing in SJ and playing D), he'll never attain any real value in his cardboard, but that's ok, I appreciate his play for the Sharks! This was a great pull for me.

Overall Value -
For about ten bucks you can get a guaranteed autograph card - that's good! And if you're lucky you may even pull a star player, double, triple, or quad auto. I'd say that would be worth it. Though the base card design isn't very good, the autograph design is great. And... who cares about the base cards here anyways!?! I wouldn't hesitate to get another one of these given the opportunity.