I'll be opening one of the lowest end products today in this edition of Retail Review. Though OPC breaks most likely won't bring in the big hits, they can be very fun to open. And I'm looking forward to seeing all the stuff that will come on out this blaster. This particular box of OPC did not come with the official Upper Deck shrink wrap. Someone on Youtube noticed that in one of my videos and pointed that out to me. It'll be interesting to see if there is something faulty with this box... but then again... why would anyone mess with an OPC blaster? 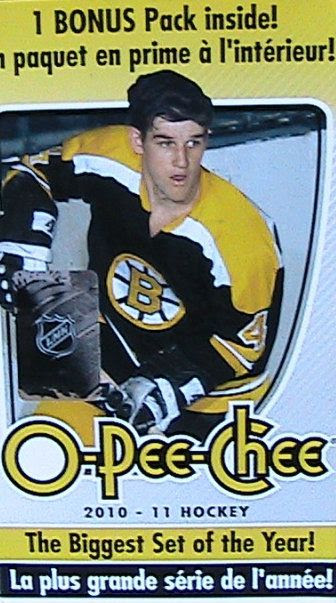 The most important thing when opening OPC is just to have fun with the cards. There is absolutely no reason to have high expectations of getting anything resembling a hit - jersey or auto. Even getting superstar players is really hard, the set is huge! It will be fun to see a lot of players that usually don't make it into card sets though. OPC (and Score) are the only brands that will ever hard cards of these players. I'm glad that some lesser known players get some cardboard. Aside from that, there will be parallels and inserts to look forward to. I'm hoping for some good shiny rainbow cards! Those are always fun to get.


Review -
The blaster was great fun to open. Though I wasn't a fan of the design, I loved the old school feel of the cards. They definitely brought me back to my younger collecting years. And those years didn't have any gloss... well, except for the rare tiffany sets Topps used to put out. But anyways, I was a big fan of just flipping through the cardboard as I opened pack after pack. And actually, having most of the cards non-glossy made the glossy inserts really stand out. They actually felt special and different - something that gets lost in modern day collecting.

This blaster actually turned out to have some cards I thought were pretty good. My second pack yielded a very nice rainbow foil of a hockey legend - that was pretty surprising. And it was very nice to get a hold of a retro card of a Shark! This blaster even had a Sidney Crosby base card in it. I definitely beat the odds on that. I don't even think I got a Sid-the-Kid in my two hobby boxes of 12/13 OPC I just opened a few weeks ago. So yeah, I would say this blaster was definitely solid for the seven bucks I paid for it even though I didn't get a jersey or autograph. 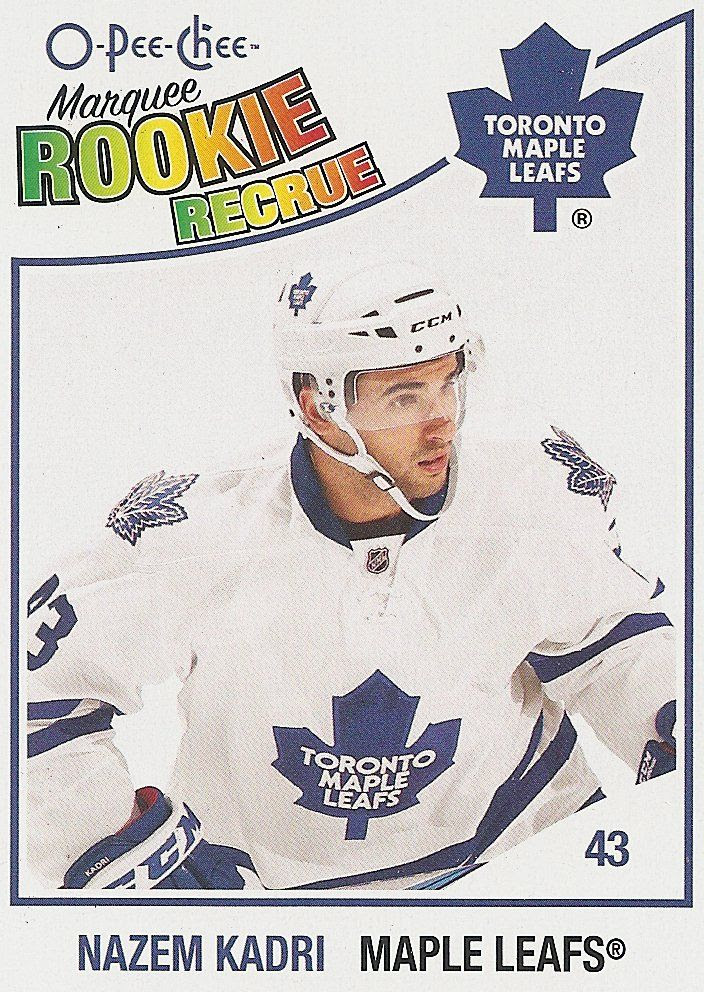 #3 - Nazem Kadri Card No. 510
Kadri was one of the bigger name rookies during the 10/11 season, so pulling this then would have been pretty cool. Interest in his cards have cooled off quite a bit since then, but he is still young and still a Maple Leaf. Maybe there will be potential in him in the future. If so, that'd be great because anytime a player is successful for the Leafs, they get a substantial boost in hobby interest. 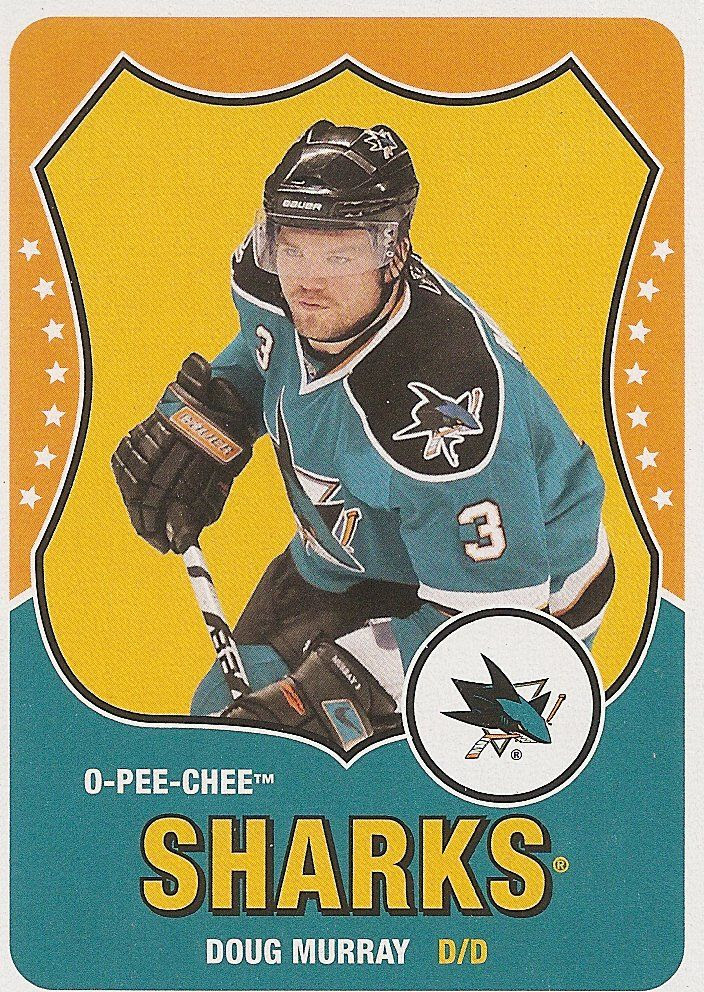 #2 - Doug Murray Retro Card No. 58
Doug Murray is one of my favorite Sharks. He's a big dude that scares a lot of people on the ice. He sort of reminds me a little of the character Jaws from the older Roger Moore James Bond films. He's actually a really nice guy in person and has a love of cooking (of all things!). Getting this retro card of him was very sweet! 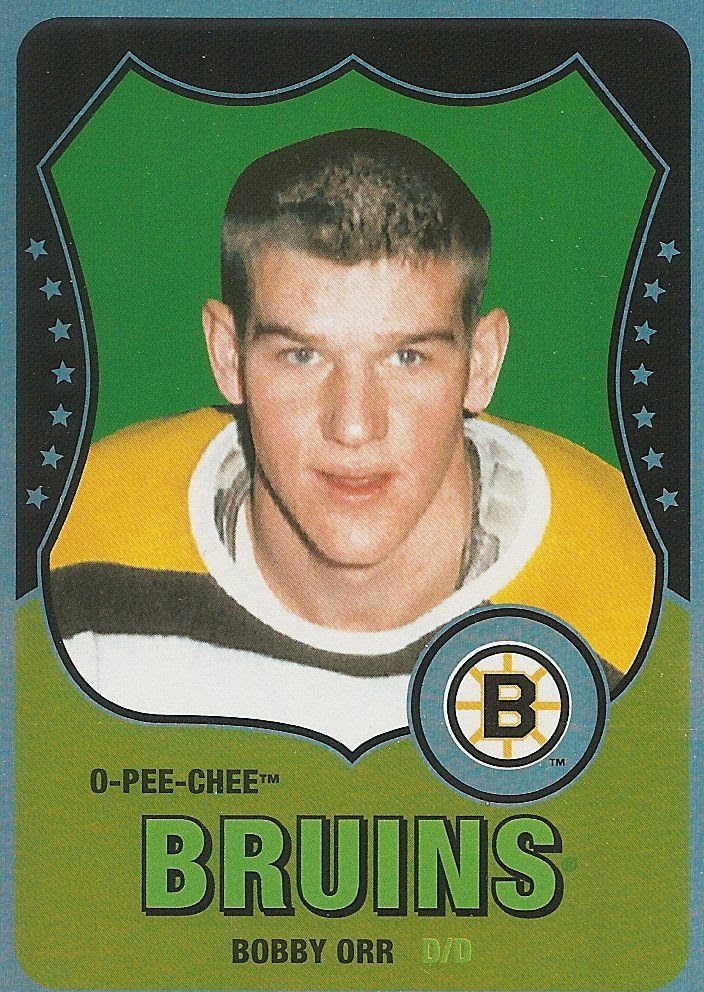 #1 - Bobby Orr Retro Rainbow Card No. 597
Here's the legendary Bobby Orr himself... in shiny foil! This was hands down the best card of the blaster. Though this card may not be worth a ton of money, it's a great (and hard) card to pull given the size of the set. When I pulled this card I was instantly happy with the blaster no matter what else came out.

Overall Value -
For under $7, this is a no-brainer break if you want to enjoy a great mix of cards. Though I didn't pull anything of high dollar value, I think the $7 was well spent. I actually wouldn't mind getting another one of the OPC blasters - either this same year or any other for that matter. They are fun! I think Upper Deck has handled the OPC brand extremely well. It's a fun break in both hobby and retail variations. Kudos!

Let me know what you thought of my 10/11 O-Pee-Chee blaster box down in the comments below. Have you ever gotten anything good from one of these? I'd love to know!