This is IT. No other hockey product ever compares to the anticipation of opening Upper Deck's The Cup. The potential of getting something absolutely monstrous is always a possibility. Year in and year out no other product has a higher-end feel than this. Other products have tried and come close, but somehow The Cup always takes the cake. This year's release continues the amazing tradition. 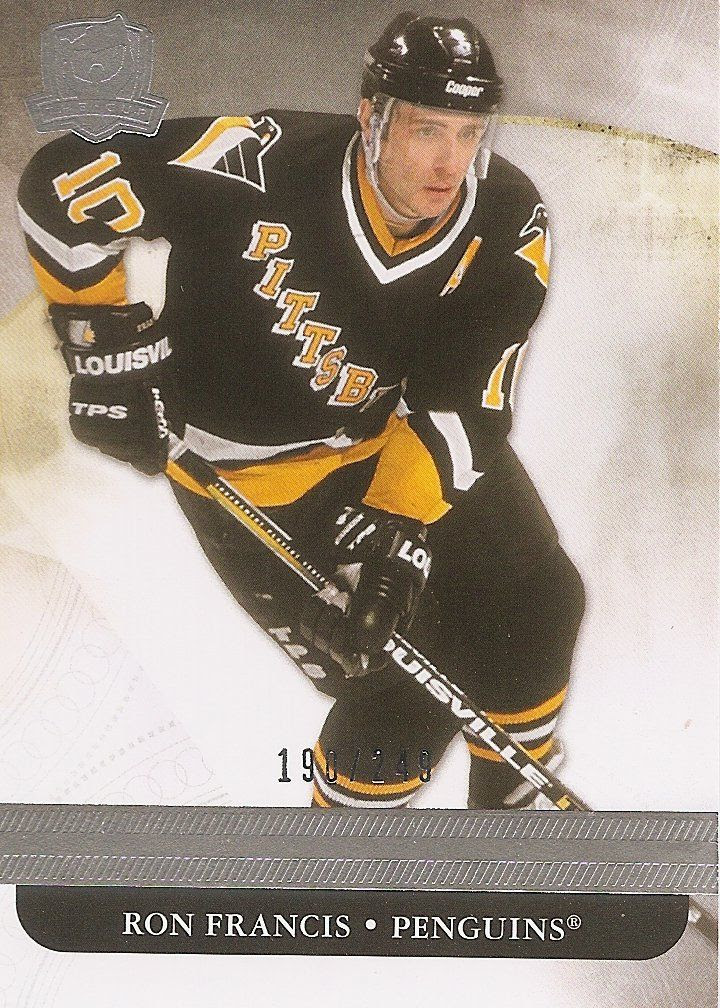 Base Card Design -
With all the mind-blowing hits found in The Cup, the base cards can often feel left out - but they shouldn't. These base cards are of the highest quality. This year's base design can best be described as 'clean' and 'formal' - which I think fits with the nature of the product. Since this is the last release of the season (for Upper Deck at least), The Cup is a set that brings things to a close. And to me, the base cards look almost yearbook-like in their design. The background the player sits atop of has that artsy photo studio backdrop sensibility to it. The entire card has a simple, yet classy look highlighted with silver foil. Everything from the grey tones to the minimalist graphics on the card works to make these cards a strong anchor for the entire 11/12 Upper Deck card line. Yes, that's a good word for these cards... strong. They aren't flashy... they aren't trying too hard... they are simply strong and solid cards. 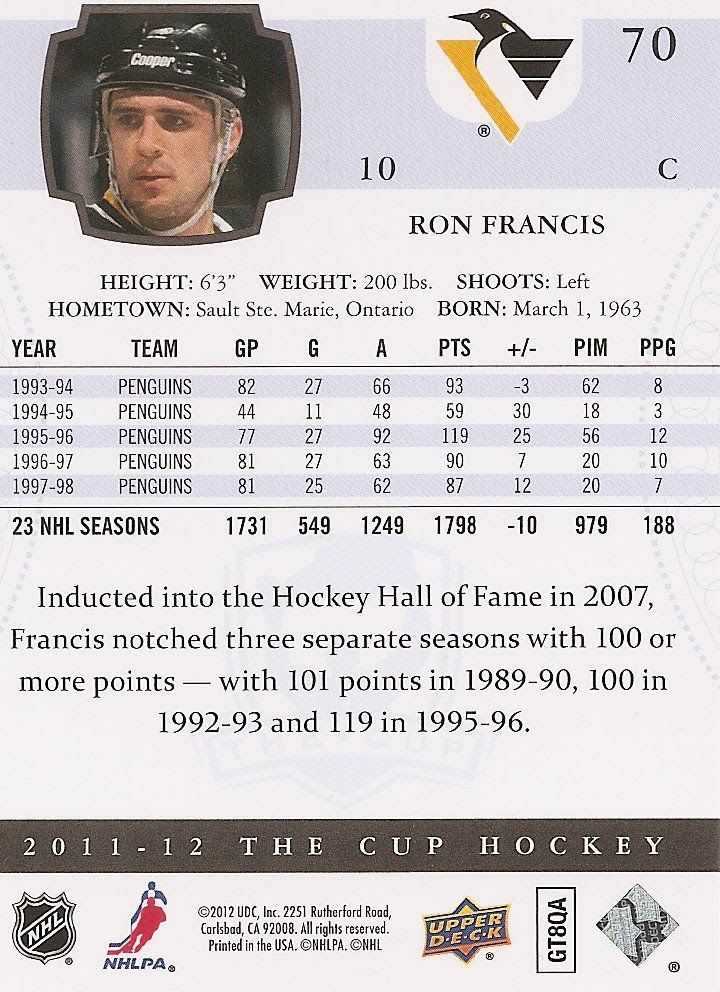 The back of the base cards continue in the same vein as the front. The backs deliver all of the relavent stats and bio information that is necessary. There is nothing flashy about the back. All that needs to be there is there. It's done well with no distractions or gimmicks. Again, just a strong card back that is what it is. No flash. No faults. 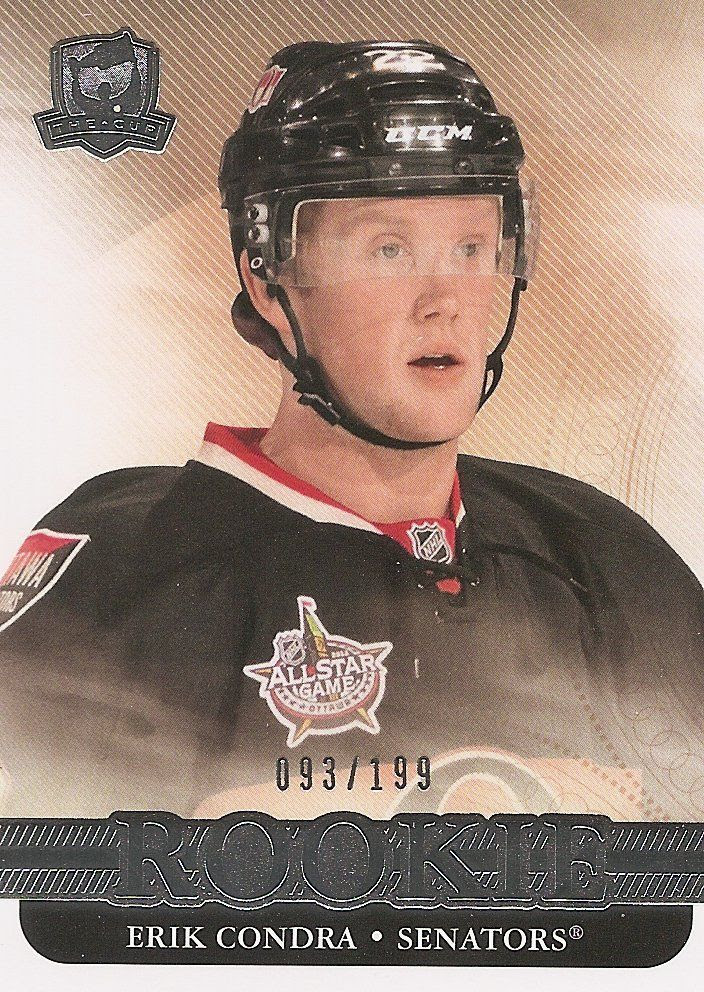 Numbered to 199 are the non-autographed rookie cards. These cards actually carry on the yearbook theme more than the standard base do. Each of the cards feature a close-up view of the player. Because of this, it really does like like a photo taken right out of someone's high school yearbook. If there was one fault with these rookie cards, I would say they underwhelm. I'm not sure if it's the colors used on these cards or the close-up photo... the card just has a softer (weaker) feel to it. It looses its strength of design. It's funny how just a slight tweak of a couple elements could make a card stumble. 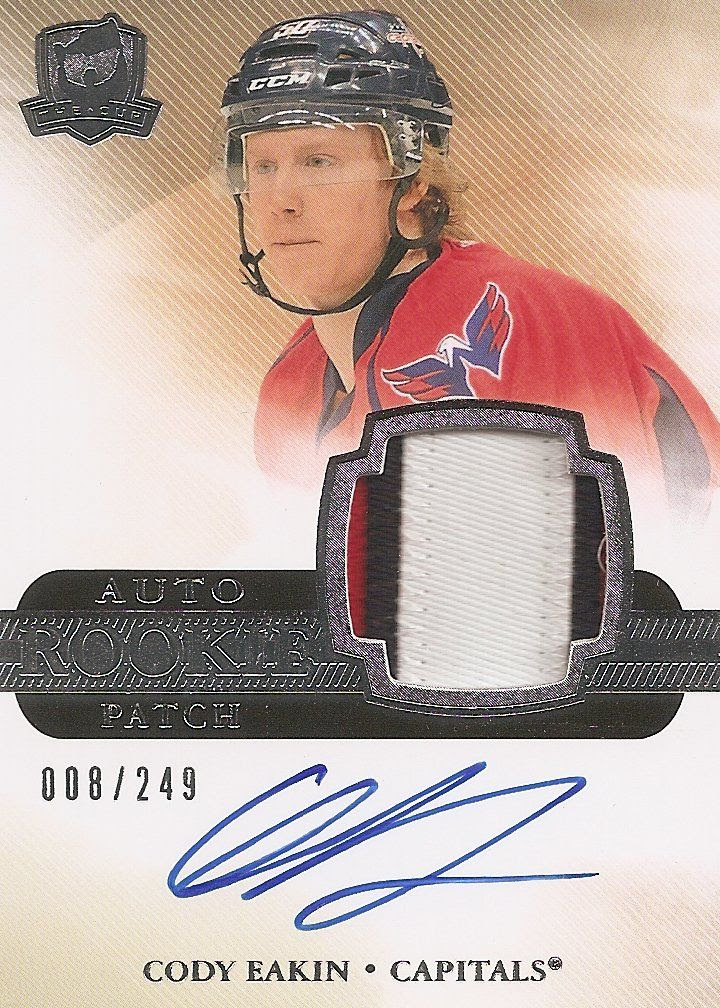 Standing tall, though, are the Rookie Patch Autograph cards. These cards really bring everything together cohesively. Though Upper Deck has chosen to use the same 'rookie-hues' as with the 199ers, the design of the card is completely changed. These cards look great. They are less formal than the base cards. They have a sleeker, more modern design that is both solid and flashy. It's as if they took the best of the base cards, threw out all the boring elements of the rookie cards, and fused them together. These RPAs are yet again another stunning rookie design that will become instant classics for collectors to chase. As always, these cards come in two forms... the standard /249 rookies and super-collectible and valuable /99ers.

Inserts/Game-Used/Autos -
Each tin of The Cup is hand packed. The folks at Upper Deck try to ensure that each tin has at least one 'hit' in it that a collector will enjoy. Packs with case hits usually will have cards of lesser values in them. It's just the way it's done. So don't expect to get a Ryan Nugent-Hopkins rookie card/99 and a Sidney Crosby/Mario Lemieux dual auto in the same pack. But some packs can yield multiple cards of solid value. I think my pack was one of those. The Stanley Cup Signature cards have been a long running tradition in The Cup. They've all had very elegant designs, and this year is no different... what is different though, is the lack of foil on these cards. Upper Deck has gone with a more flat finished card rather than the shiny foil that they've used in other iterations. It's nice. I actually wasn't a huge fan of last years Stanley Cup Signature design and am glad they chose to change it up a little this year. The autograph is very visible in the white autograph area at the bottom. These are great cards, and relatively affordable ones too, to get of your favorite players. Each single-autographed card is numbered to 50. 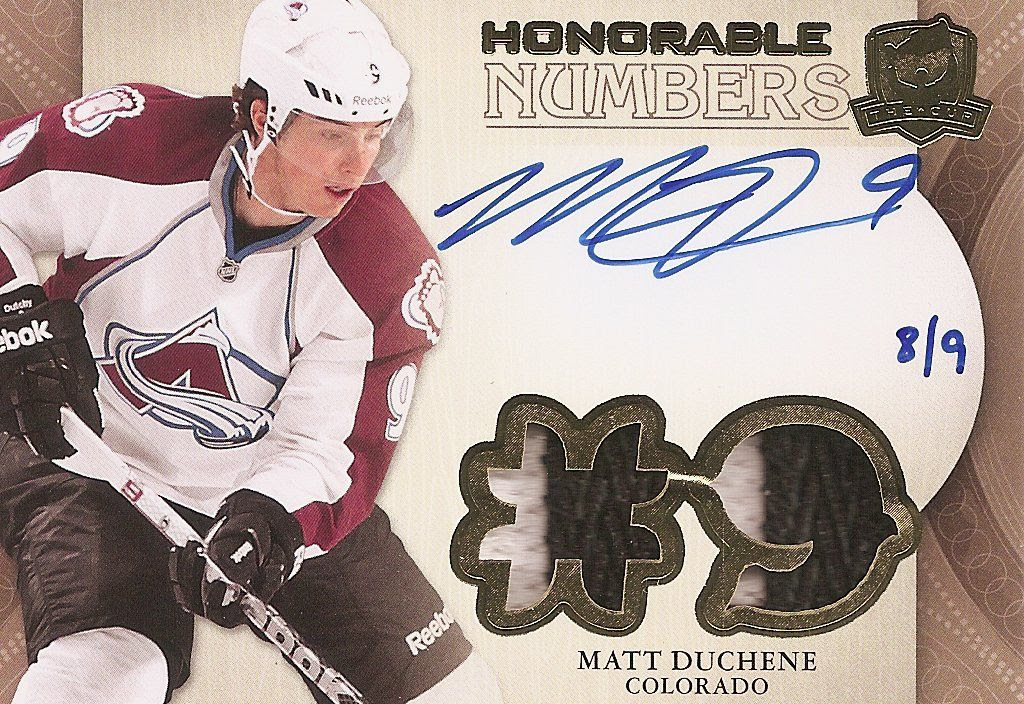 Honorable Numbers have also been a staple of The Cup. These cards are more similar to past designs than the Stanley Cup Signatures. The main attraction of these cards are the inclusion of an autograph, patch, and low numbering. Depending on the player, the card can be extremely short printed. The Matt Duchene I pulled in my tin is definitely on the shorter print side of things. It's also hand numbered rather than machine stamped. That's a really cool personal touch. Honorable Numbers are always a great card to add for any player collector. Of course, if your player is someone like Taylor Hall (number four), it can make things pretty difficult.

Autographs, crazy patches, tags, and low numbered cards abound in The Cup. Each tin you open is creates such an incredible moment. It's definitely worth it to crack a tin and see what you can find if you can afford it. The hits are simply INCREDIBLE.

Overall Rating -
The Cup is a product that I wish everyone could at least try a tin of. Like I just mentioned, there is nothing like opening up a tin. Obviously the tin price is beyond the reach of most collectors. But the good news is that very nice singles can be obtained through eBay and trade forums for reasonable prices. And actually, I was pretty surprised at the prices of The Cup this year. I am pretty sure the cost of a tin is significantly higher this year than last. And that's totally nuts in my opinion!

But anyways, The Cup is The Cup. It's awesome. I feel really privileged to be able to crack a tin of the stuff. I definitely recommend the experience if you can do it. It's the best stuff of the entire year. From the base cards to the nastiest patch auto, these cards have no equal.


Check out my tin of The Cup!