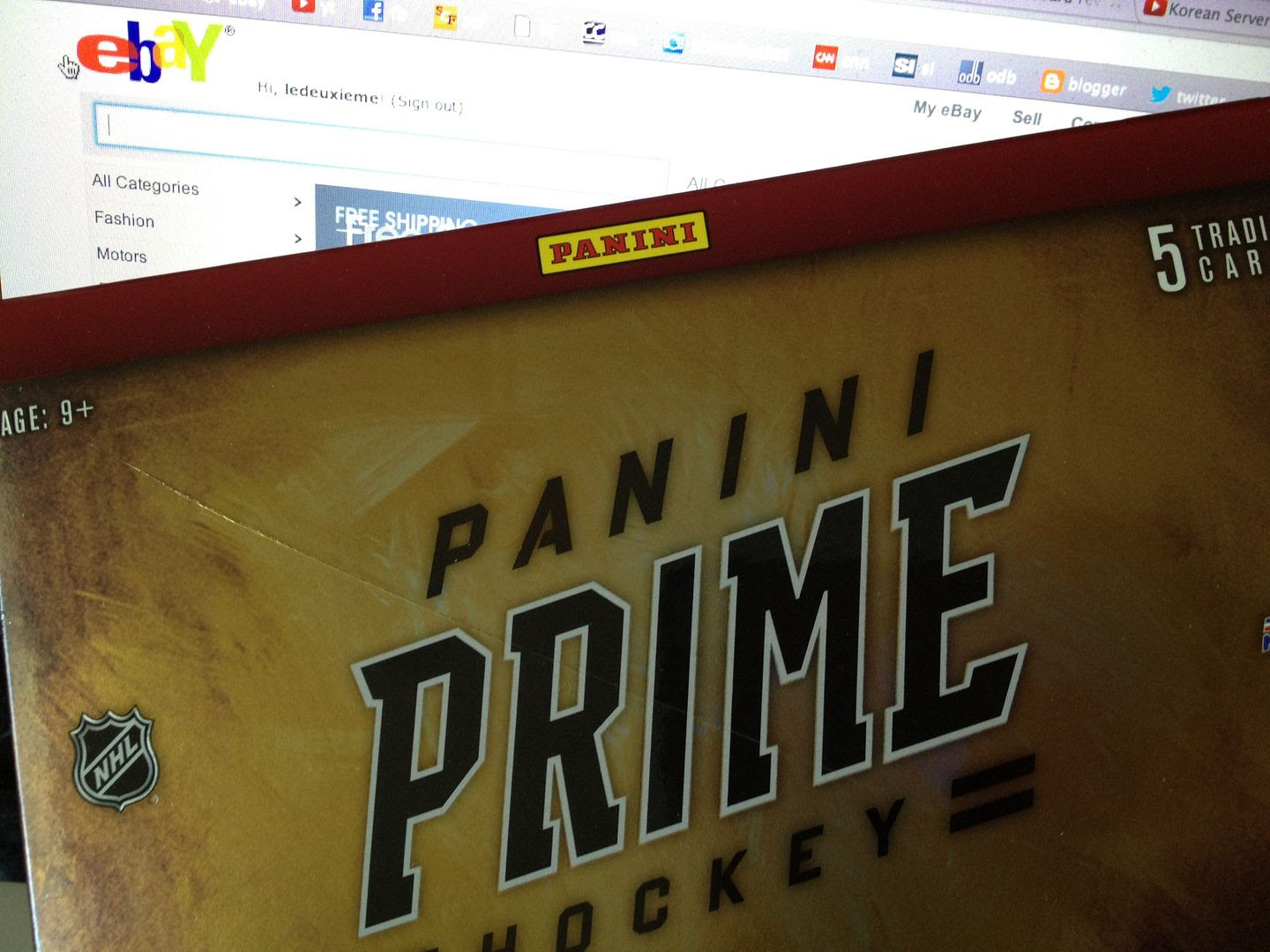 This is a special posting regarding a case break that I did of 11/12 Panini Prime Hockey. My intent from the get-go was to see how much I could re-coup from a case if I decided to bust it and sell all the cards I got from it. So going in I knew that there was a very big possibility of losing money on this... and I was prepared for it. But of course my hope was to pull that one huge card that would pretty much pay for the case... because that realistically could indeed happen. But if not, at least I would have fun seeing what cards would come out and keep any PC cards that may have come my way.

I bought my case of Prime from famous Youtube box breaker Chri5784. It was a toss up between him and my LCS D&P Sportscards, but I went with Chri5784 because D&P told me they could only get a few boxes of Prime in. Prime was supposedly a pretty hot ticket, and judging by the sneak previews on Panini's Knight's Lance posts, it seemed to be THE product to get this year. But what I found out was that Panini still has a bit of catching up to do when it comes to secondary market re-sale value.

I would have to say that my case of Prime was good - but definitely not great. There wasn't one card in it that totally blew it out of the water in terms of big money value, but there were several cards that I thought were pretty nice. I got some sweet patch pieces and low numbered cards. The names could have been better, but I would say that though I missed the high profile guys like Crosby, RNH, and Ovechkin, there were several players with a good hobby interest in the case.

A couple things to say before I detail my case break. First, Panini released Prime on a Friday of a long holiday weekend. Though my cards were busted on Youtube, I did not get them until the next Wednesday. So even though I was one of the first to see my cards, I was not, unfortunately, the fastest to eBay - huge bummer here. Secondly, I was trying to sell as fast as possible because I felt the time crunch in getting everything sold before The Cup hit. All auctions were 3 day auctions with some cards being 'Buy it Now/Best Offers'. I may have gotten less for the cards because of my impatience... or not. That's a little up in the air. But... what I got was what I got... and you'll see it all here. Let's go! 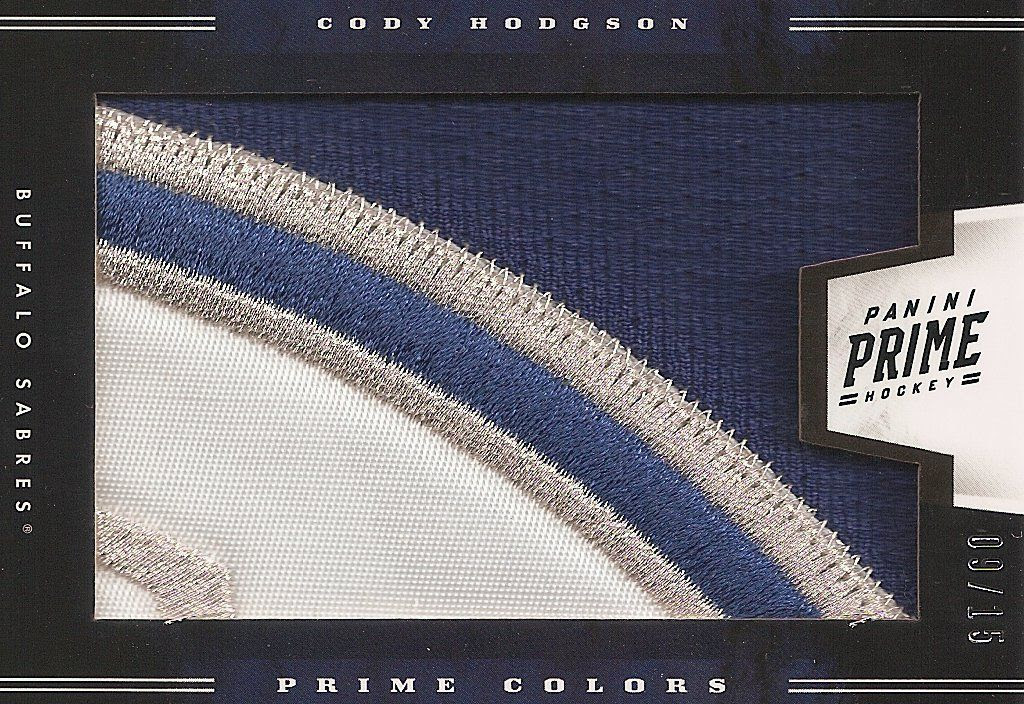 Cody Hodgson Prime Colors/15 (Sold for $65 with a Best Offer):
Hodgson was a very hot rookie this year, but his move to the Sabres really but a damper on his card values. I initially had this card for $125 BIN/OB knowing well that nobody would use the BIN. I did, however, get some offers on it. I ended up going with the highest offer of $65. I thought I did well considering a better patch of Hodgson's went for $56 just a few days before this one was put up. 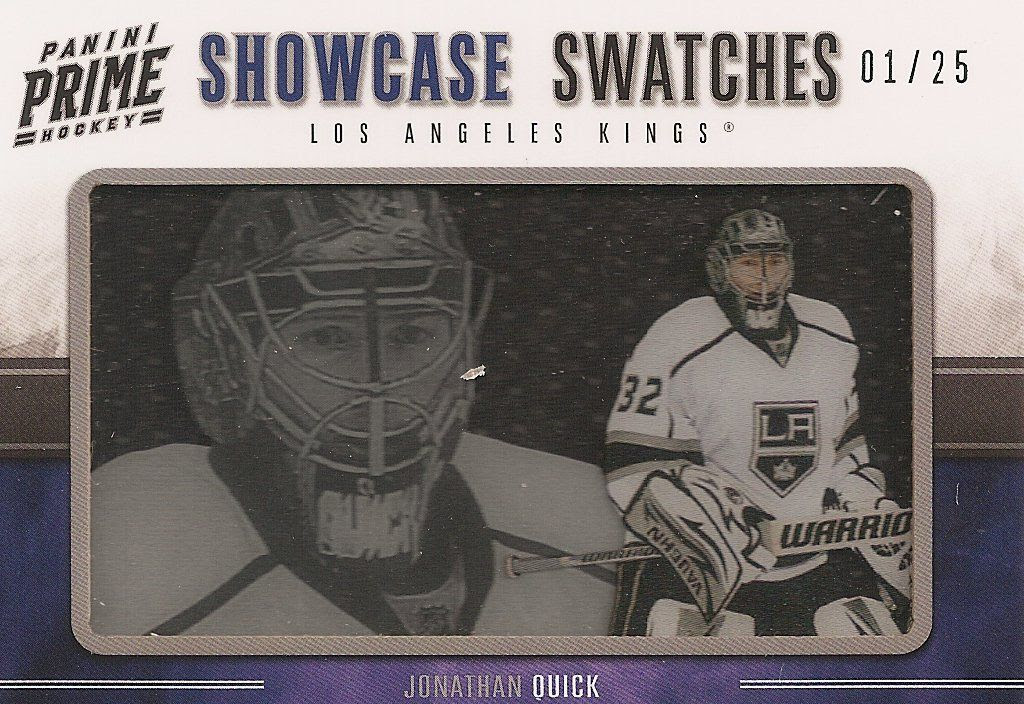 Jonathan Quick Showcase Swatches/25 (Sold for $24.50 at auction):
This card was a complete mystery to me as to what it's final sale value would be. I couldn't even make guess when I first got it. I mean, Quick had just won the Cup, but I wasn't sure if he had already cooled down or not. A quick scan of eBay showed another one at $99 BIN/BO. I set a BIN at $65 with no takers. It went for less than $25 at auction. 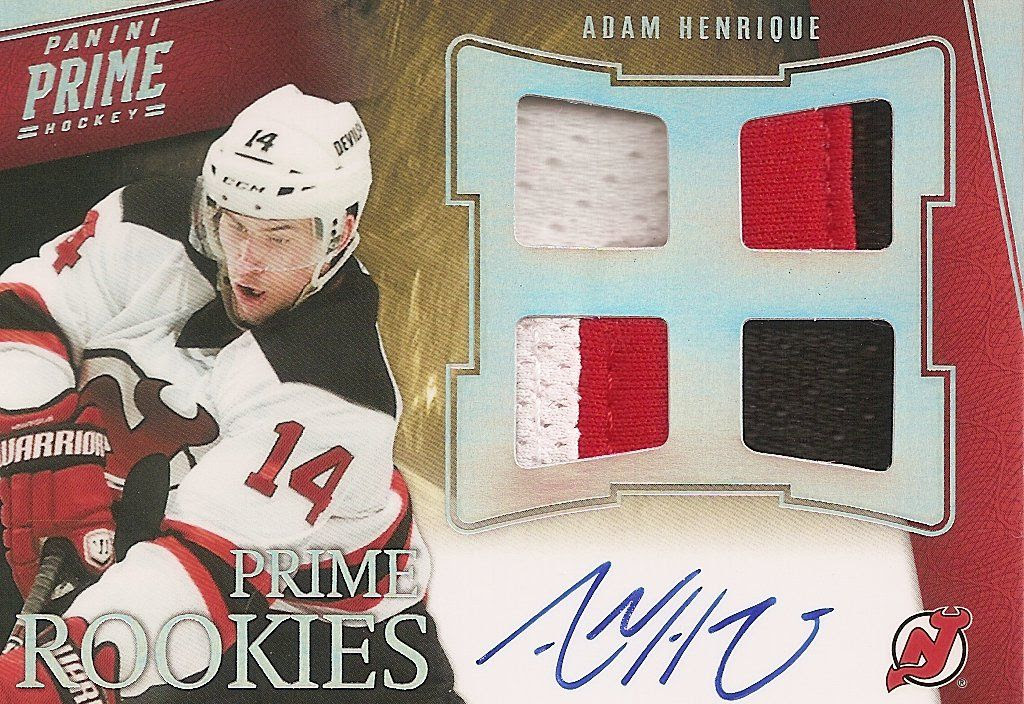 Adam Henrique Prime Rookies Dual Jersey Dual Prime Auto/50 (Sold for $34.33 at auction):
This one definitely surprised me in its final sale price. A very nice low numbered card of a hot rookie who did well in the Stanley Cup finals. I guess people have a fast fading memory or don't care too much for the Devils. I know this isn't considered a true rookie card, but wow, not even that close to $40. 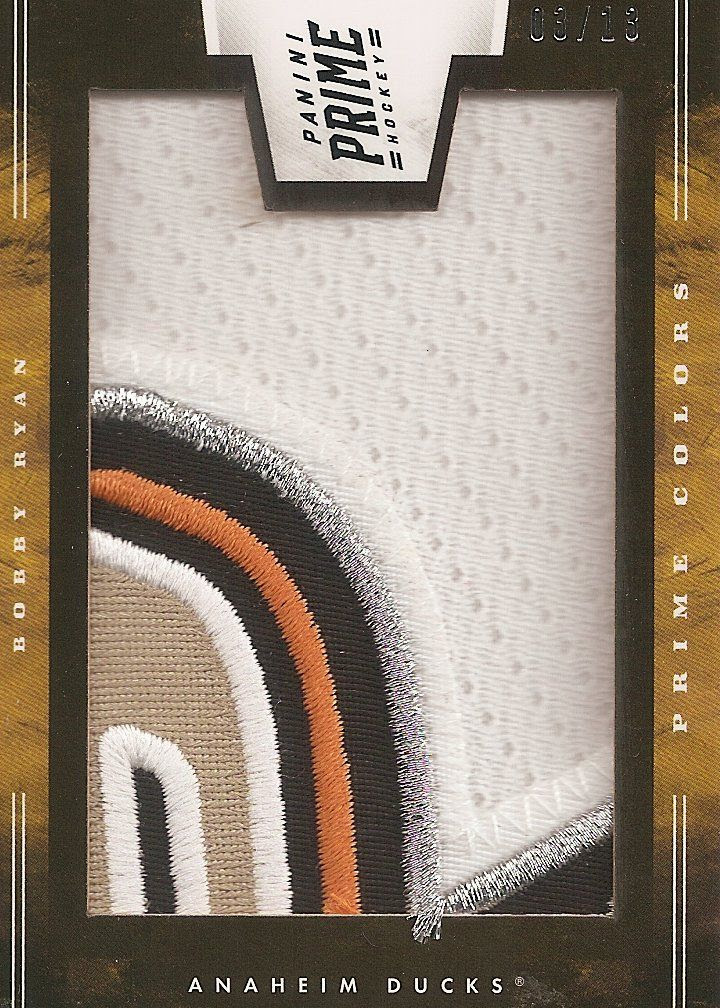 Bobby Ryan Prime Colors/13 (Sold for $33 at auction):
This card was another one of those cards I had no clue as the final value. I did hope for more than I actually got for it though. Even though the piece of patch on this card is pretty nice, I did see better ones on the Bay when mine was going. But still, just $33 for a card limited to only 13. Sheesh! 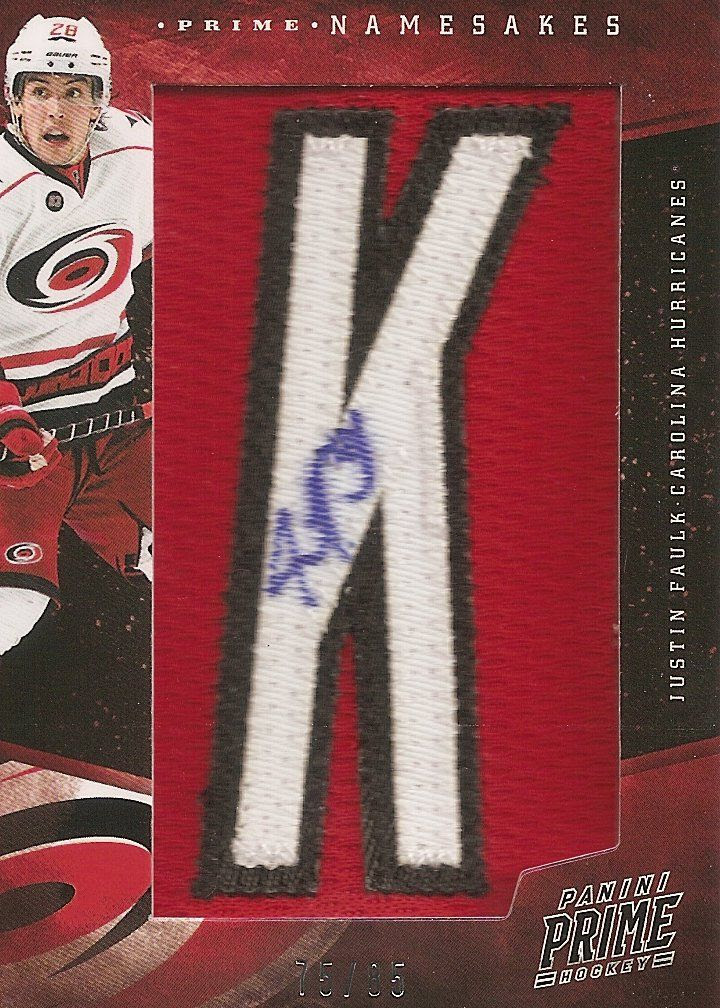 Justin Faulk Namesakes Manufactured Letter Patch Auto/85 (Sold for $20.50 at auction):
This one actually surprised me in a good way. Justin Faulk is by no means a big name, but these letter patches always end up selling for a decent amount. I guess people really want to put the whole thing together? Not sure. But this one as well as a Dustin Brown letter went for solid final values. 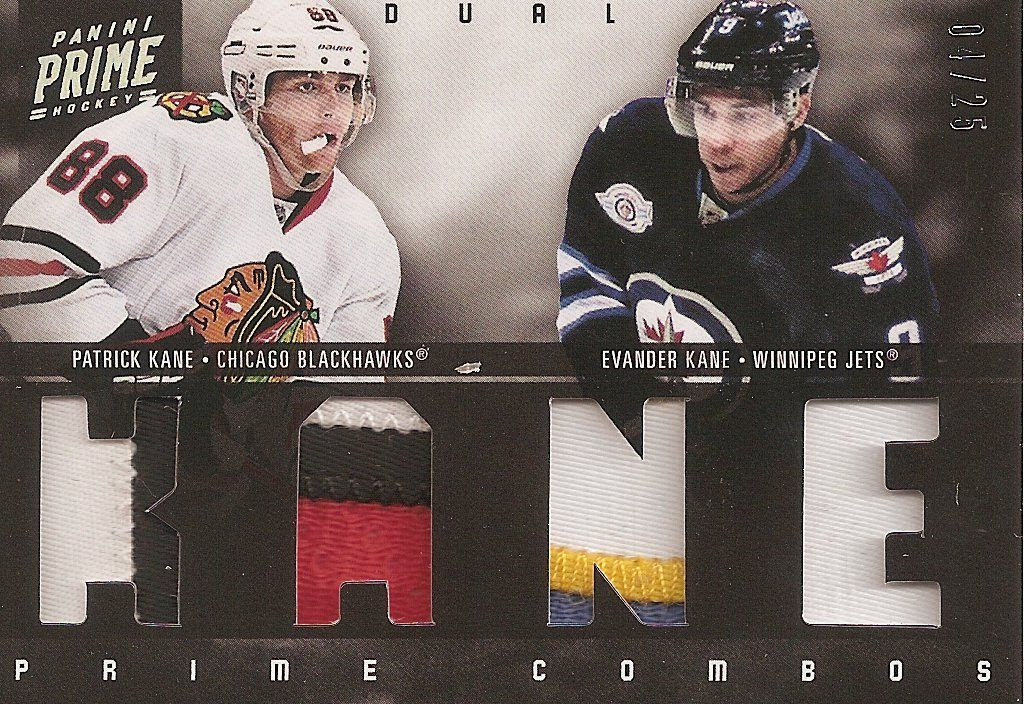 Patrick Kane/Evander Kane Quad Patch/25 (Sold for $12.29 at auction):
This is one that I probably could have gotten a lot more mileage out of by just keeping it and using it as trade bait. A few other quad patches I sold from Prime went for quite a bit more than this one did... and those did not have the quality of names as this card. This was a great card and I think whoever won this got a great deal. 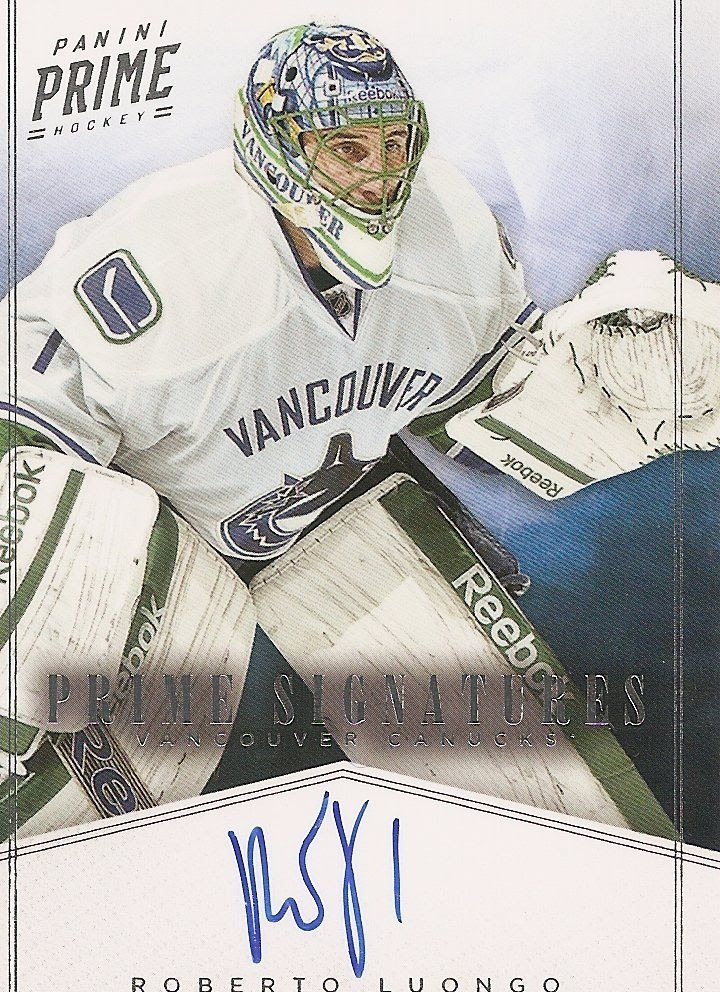 Roberto Luongo Prime Signatures/99 (Sold for $4.90 at auction):
Wow, even though Luongo has such an uncertain future in Vancouver, I would have thought a hard signed autograph of his would get at least $5, but it didn't even reach that! Maybe people thought the 99 print-run was high. I didn't bother looking for how much other Luongo Prime Signatures went for, but I didn't expect this at all. 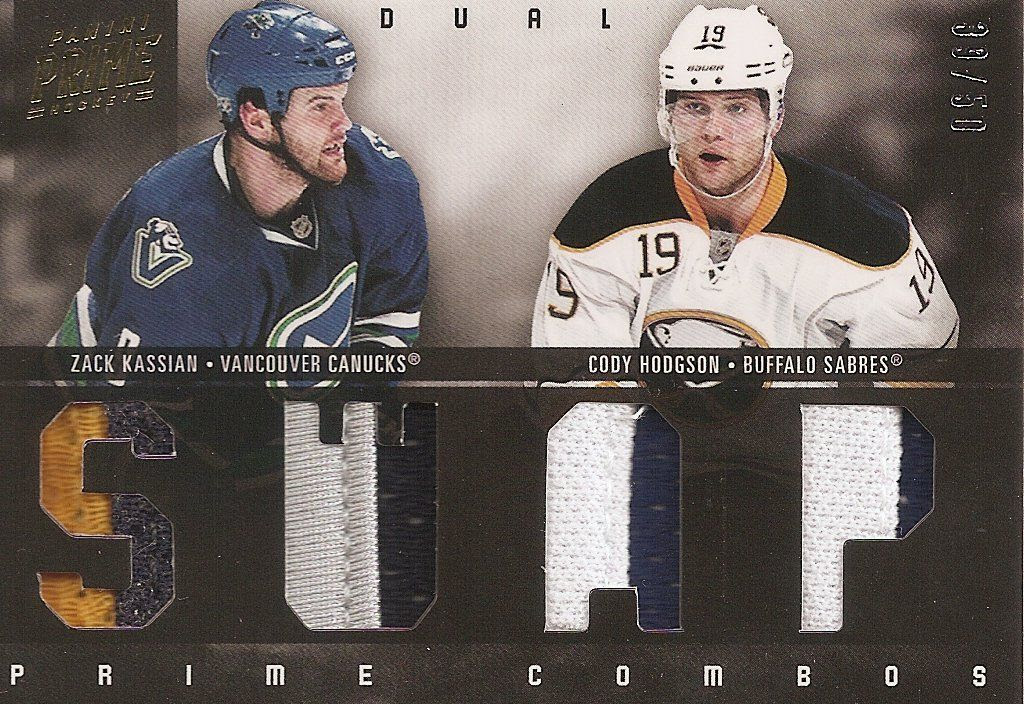 Zack Kassian/Cody Hodgson Quad Prime/50 (Sold for $8.05 at auction):
Yet another card I should have kept as trade bait. The story behind this card was that with so many cards to list, somehow this one didn't end up getting listed. When all the other auctions ended I noticed that this one was left out... so I quickly put it up for sale. Three days later - sad face when looking at the end-price. Four prime pieces each with 2 colors and that's what I got. For me, the final price on this one hurts more than the Luongo. 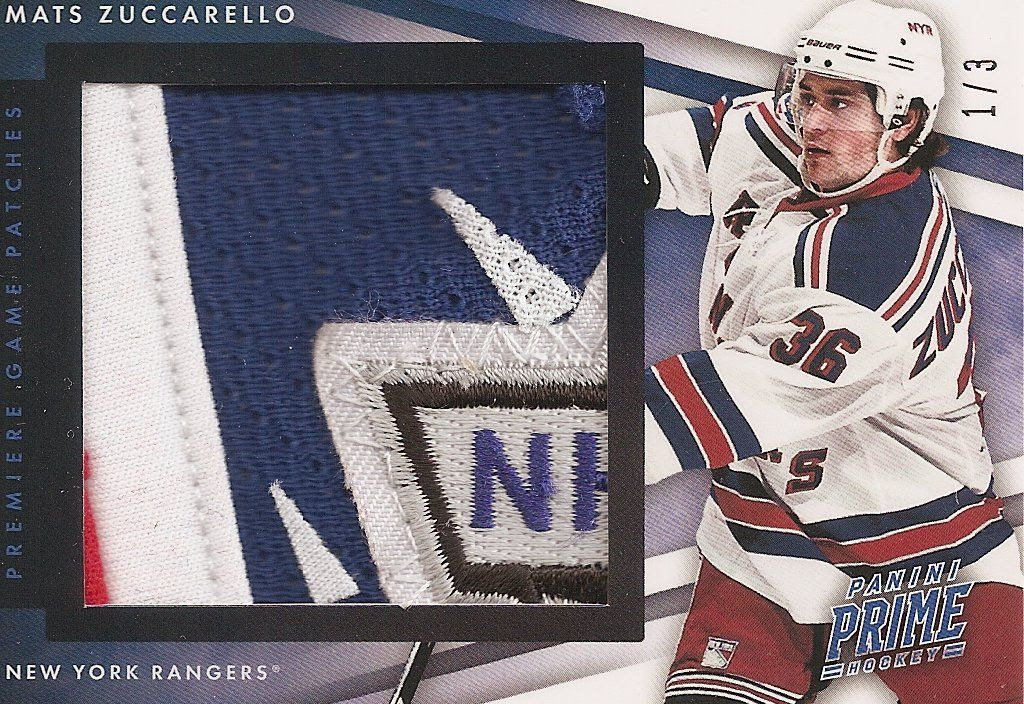 Mats Zuccarello Premiere Game Patches 1/3 (Sold for $99 with a Best Offer):
This Zuccarello card was easily the best and most nasty patch I got in the entire case. It was also the most limited card as it was serial numbered to only 3. On one hand, the card is really cool and really limited. On the other hand... it's Mats Zuccarello. So again, I had no clue as to what this would go for. Because he wasn't a big name, I decided to put at at $150 BIN/BO hoping that maybe some big fan would just snatch it up with the BIN. Well, that didn't happen. After several very low ball offers, I was happy to let it go to someone who offered $99 for it. 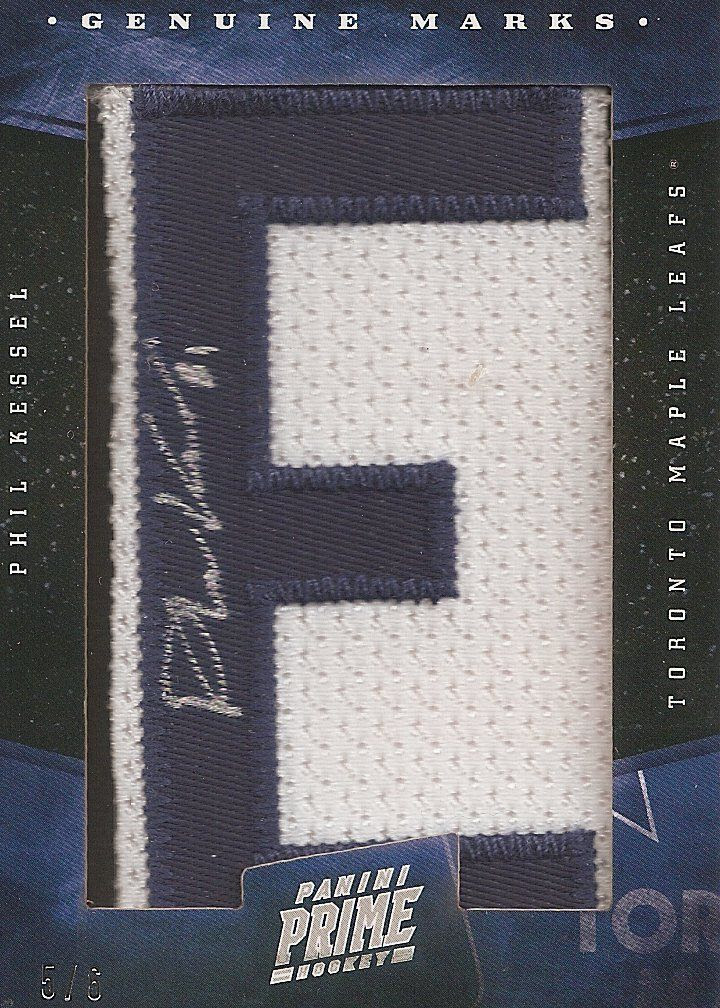 Phil Kessel Genuine Marks Game-Used Letter Patch Auto 5/6 (Sold off eBay for $100):
When this card was pulled I was very happy. I think this card was actually showed off in one of Panini's previews of Prime. Not only is this card an actual game-used letter... it also has an autograph on it. Many of these types of game-used letter cards in Prime do not, so I had high hopes for this it. But as it turned out people were not as enthusiastic as I was about it. I put it on SCF and was glad to take an offer of $100.

So there you have most of the major cards that I got from my case. Are you surprised at the prices I got for them? Would you have paid more for some of these cards? If you... where were you?!?!?! Just kidding.

Let's add up everything from the case (I did not sell all the base cards I received, and I also held a few cards for a contest give-away. Those cards will not be included here):
*All prices are in USD

So the total price I paid for the case was $1600. The percentage (rounded to the nearest tenth) of money I got back was:

Which is a loss of nearly a thousand dollars. Ouch.

So... am I angry or mad? Well, a bit, of course... but that's really the nature of the game and the hobby. And I emphasize hobby, because a hobby is something that you spend your money on. And in other words, that you lose money on. It should bring you joys in other ways. And so taking that perspective I'm 'ok' with the loss - though it is quite large.

Looking back, I think I would have been happier and better off by keeping a lot of the nicer cards from this case and using them as trade bait. I could have traded them for some great Sharks cards or other PC stuff. But then, I wouldn't have been able to do this little analysis.

So here are my final thoughts... though Prime really underwhelmed in re-sale value on the secondary market, I still give prime a huge thumbs up for being a top quality product. I stand by my perfect rating of it in my review. The cards are still stunning... it's just that the prices you get for them are also stunning (in other, less nice, ways).

I feel that Panini still has a ways to go in order to catch up to Upper Deck in terms of card values. I can't be concrete about this, but I think the chance of paying for a tin of The Cup with what you pull in it is greater than something you would get from Prime or even Dominion (not out yet as this post is written). Again, that's just a theory of mine. I'm of this opinion this because I can't imagine pulling any one card out of Prime (other than a really GOOD one-of-one or super-low numbered card of a superstar) that could reach the $200 box price. The Cup, however, though it's per tin price is insanely high at the moment, has cards that could do this on a higher percentage basis. For example, pulling a /99 rookie of RNH or Cooter... or a Property of card... or a Gretzky auto... or a Crosby/Lemieux dual auto... the list goes on.

If I had to recommend a case of something, I would go for a 3 boxer of The Cup over that of Prime. The cost is about the same, but I think the Cup is a safer bet. Think about it this way. When you buy 3 tins of the Cup, your chance at a case hit are higher (one in six or one in three, not sure)... when you buy a case of Prime, your chance of the case hit is 1 in 8 boxes. There will be a lot more boxes of Prime that don't have much in it compared to tins of The Cup. But anyways, like I just said, it's all a gamble... all a bet. Just keep that in mind when you buy ANY of this stuff.

Thanks for reading. Hope this was helpful to you. Let me know what you think!
Posted by luke. at 7:42 AM