In somewhat of a surprise to me, 09/10 Upper Deck Series two was chosen by the views as the box to open up this week. And I'm more than happy to give this blaster a rip. 09/10 products will always hold a special place in my heart as they were the first cards I bought upon returning to the hobby. For an extremely reasonable price, I was able to pick up this box with tremendous rookie card potential. 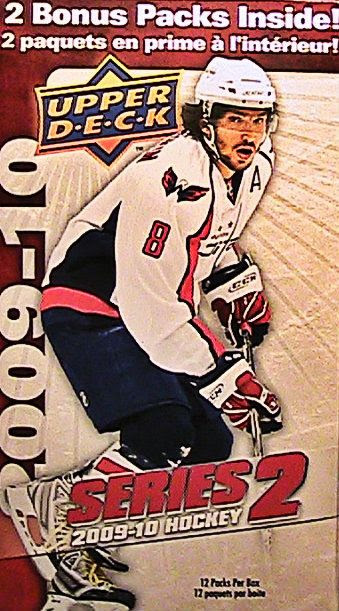 There are some great cards that could possibly come out of 09/10 Upper Deck Series 2 blasters. Logan Couture, Brad Marchand, Braden Holtby, James Reimer, Michael Grabner, and Jonas Gustavsson all have Young Guns from that series. In addition, Victory rookie cards of John Tavares, Matt Duchene, Evander Kane, and Antti Niemi can also be found here. I'm not sure why these blasters have been discounted so heavily at Dave and Adam's Card Word... but it's an awesome value for any hockey collector who's looking for solid cards at a modest price.


Review -
The Upper Deck Series 1 and 2 blasters are always fun to open. Part of this has to do with the fact that they contain 12 packs to bust. After opening up blasters with significantly less packs (like TWO packs per Be a Player blaster), this seemed like a much more substantial break. I knew going in that I would most likely get a few inserts, some Victory cards, and two precious Young Guns.

Unfortunately, the Young Guns I pulled were pretty lame - Ryan Stoa and Ryan Keller. For a second I almost read Keller's card as 'Kessler', but obviously that couldn't be the case. It was a little disappointing to get these two players, but that's always the risk in any product you buy. At the very least, though, they were two Young Guns that I did not already have in my collection. And design-wise, these cards look great to me. I am a big fan of the 09/10 Young Gun design. It's so very different than any other type I've seen from Upper Deck. I mention in my video that they look 'quasi-futuristic'. I like that term and I'll stick with it when describing the 09/10 Young Gun cards.

Two designs in this break that I wasn't as fond were the Captain's Calling insert card and Victory rookies. The Luongo Captain's Calling card looks to of had little to no effort in thinking of the design. It's very generic, and I can't see collectors ever wanting to build a set of these boring cards. And somehow the Vicory rookie cards have also gotten the generic treatment too. The 'Victory Rookie' logo and the grey borders don't do the card any favors.

All-in-all, even though I didn't get anything mind-blowing-ly awesome, the break was fun for nostalgic reasons. For my top 3 this week, I've chosen the three cards that really brought me back a few years to when I returned to the hobby.

Here are the top 3 gems of this week's break. 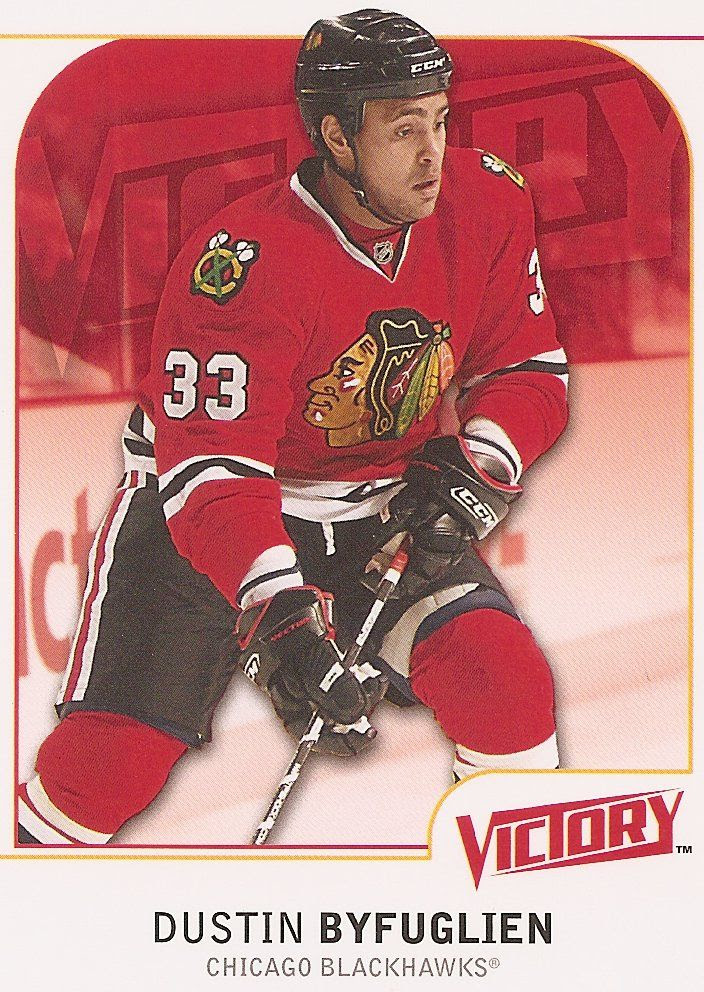 #3 - Dustin Byfuglien Victory Card No. 262
I remember seeing Byfuglien's name and being like... how the heck do you pronounce this? I mean, if you saw his name without knowing him, you would have absolutely no clue. I think most people would see his name and read it: by-foo-guh-lee-in. Well, the real way to pronounce Dustin's last name is: BUFF-lehn. And it's cool that Victory cards have how to pronounce the name on the back! Pretty neat. Did you know that? Check it out if you have some old Victory base around. 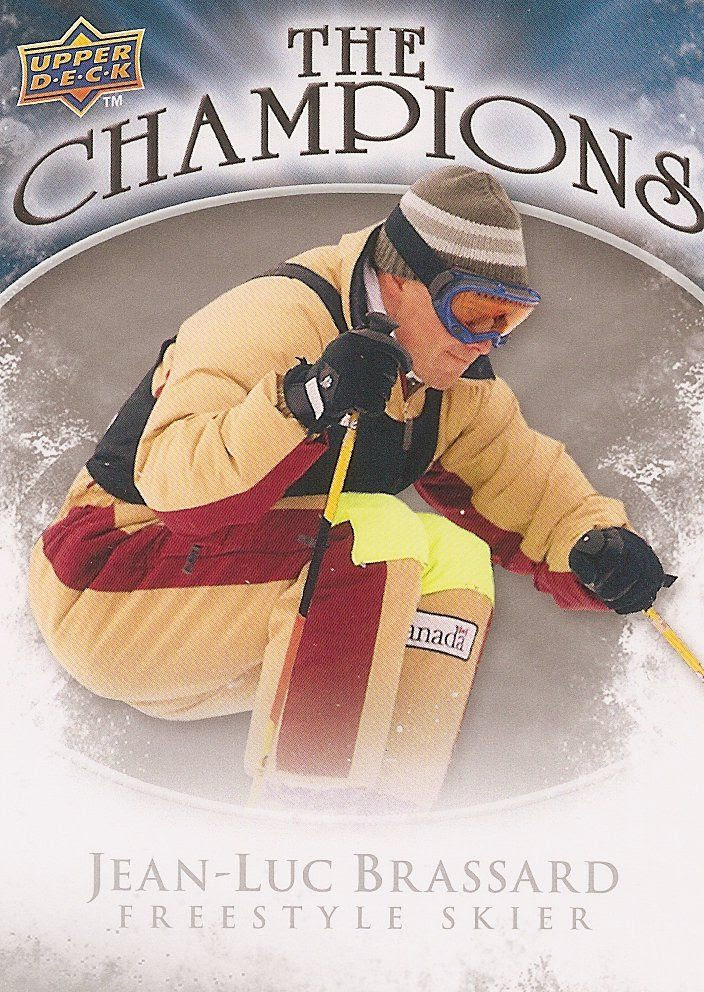 #2 - Jean-Luc Brassard Card No. CH-JB
These 'Champions' cards were cards that dealt with winter sports. They had a focus on skiers, figure skaters, and others of that ilk. Most people didn't like getting these cards, but I did. In fact, I ended up collecting the entire set of the autographed versions. Jean-Luc Brassard didn't have an auto in that set, so seeing this card was surprising to me. Here's my collection, some of the cards are worth quite a bit of $$$: Click Here. 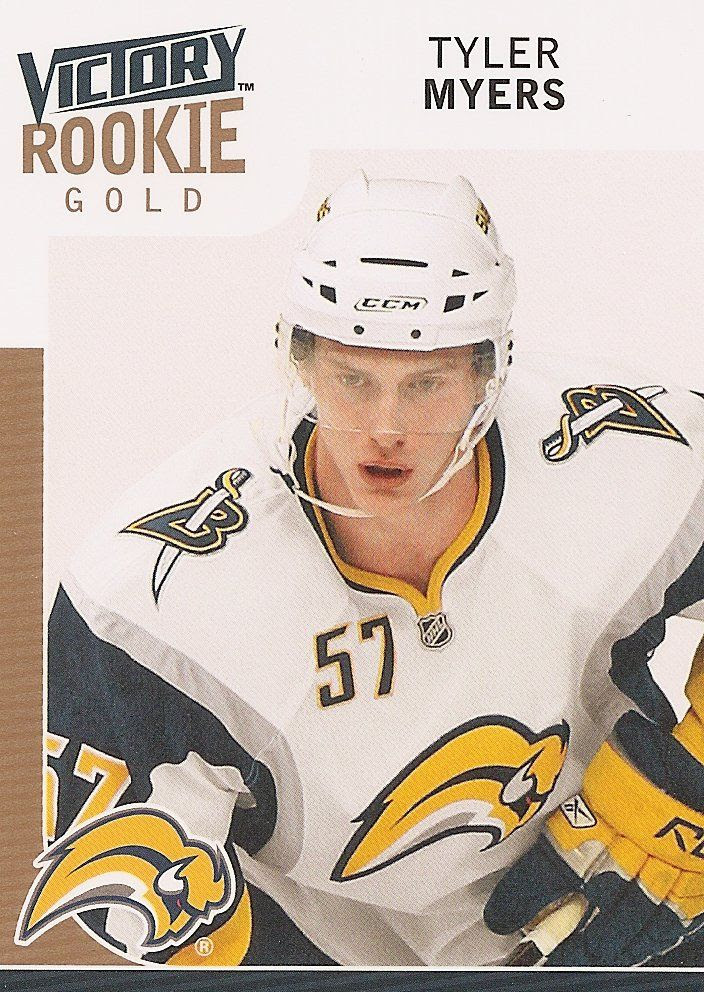 #1 - Tyler Myers Victory Gold Card No. 303
Ahhh, Tyler Myers... the memories! Myers haunted my 09/10 breaks in a big way. And that was a good thing because he was an outstanding defensemen and rookie of the year! My two biggest pulls of his were his UD Ultimate Rookie Patch Auto/25 and his Cup Rookie Patch Auto card/249. I still remember the day I bought my first pack of Ultimate Collection and hitting that patch/25. I didn't know who Myers was at the time, but was very happy to find out he was a player of some quality. Though I sold and traded most of my Myers cards from that year, I still take a double take whenever I get his cards.

Overall Value -
This blaster box was a bit of a dud, but at $8 it's still a steal! I would have no problem recommending these at the price they are currently at Dave and Adam's Card World. I think 09/10 UD Series 2 is a bit of a sleeper still with some great players of quality to be found in the Young Guns set. Go and get some with your spare change!

Let me know what you thought of my 09/10 Upper Deck Series 2 blaster box down in the comments below. Have you ever gotten anything good from one of these? I'd love to know!