With Upper Deck's opening salvo of O-Pee-Chee last week, Panini had to respond with something of their own. And they have.  Score, Panini's first 12/13 product, has hit the store shelves. Much like Upper Deck's OPC, Score is Panini's lowest-end offering, so it'll be very interesting to see how the two products compare head-to-head. In the previous two years, Score has overachieved and provided superb quality at a very modest price point. Will it deliver the same this go-around? Let's see! 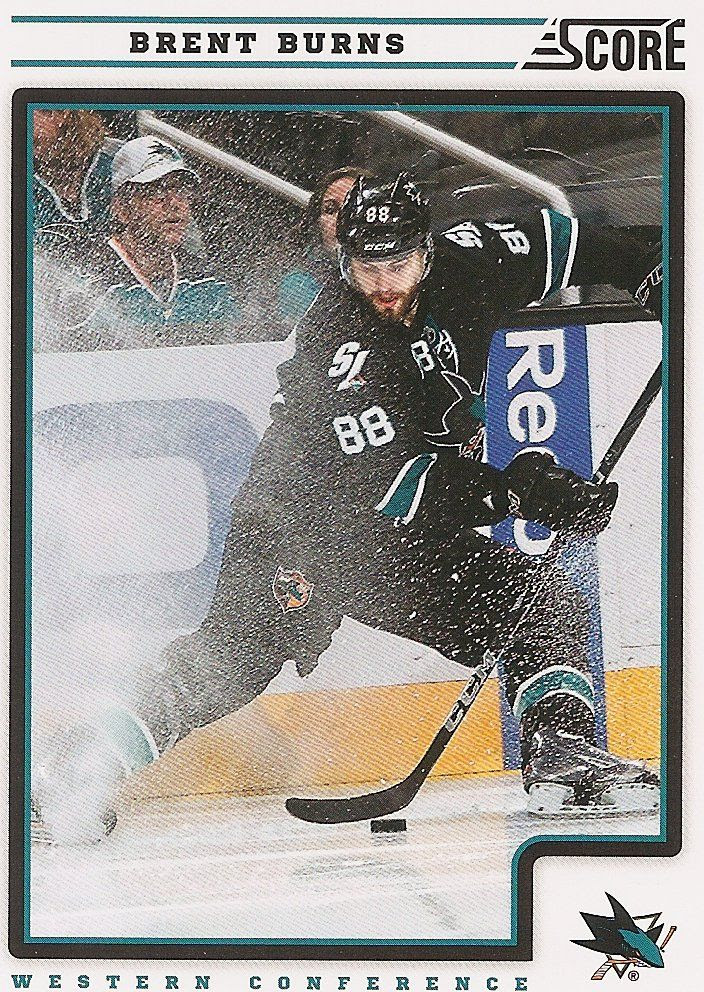 Base Card Design -
Buying a box of Score will get you a ton of base cards. And breaking pack after pack, I have to say that the design underwhelms a bit. I find the cards to be neither here-nor-there. In fact, the word I would have to use to describe them is bland. To give some perspective, I need to bring up the previous two years of Score Hockey base cards. When Score first returned in the 10/11 season, they had a throwback retro design that many collectors instantly felt nostalgic about it. It felt familiar but new at the same time. Last year's 11/12 design brought a newer take on the Score base. The design was fun, crisp, and modern. This year's set doesn't feel nostalgic nor modern. It actually reminds me of the forgettable Score sets of the late 90's and early 00's across all major sports. That era of Score is not fondly remembered, and somehow this year's base cards have tapped into that feeling exactly. Not to say these cards are completely horrible - the design is clean, and some of the photos are great for a low end set... but this year Score just felt a bit off and a lot less fun. 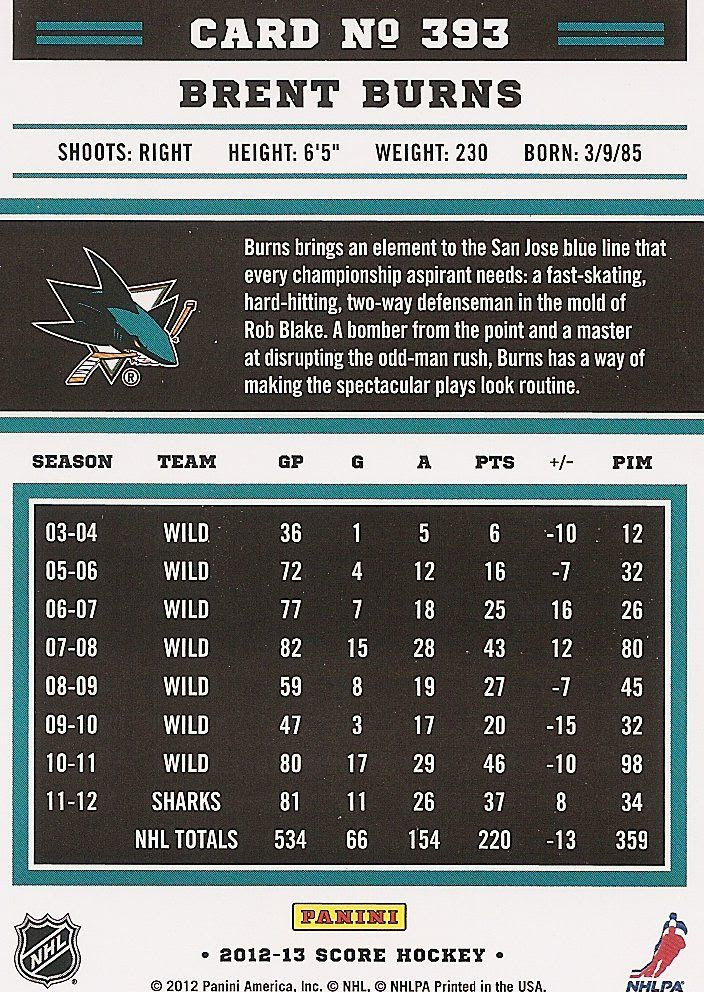 The backs of the cards are well done. There is a bit of showiness to the backs that the front lacked. Though it may not be the most ideal place to put the numbering, I do like how the card numbers look at the top of the card. Nice clean lines and rectangular shapes frame everything on the back into an organized and simple presentation - very sweet. Also, along with full statistics, many of the cards feature a full write up for the player - something noticeably missing in OPC. 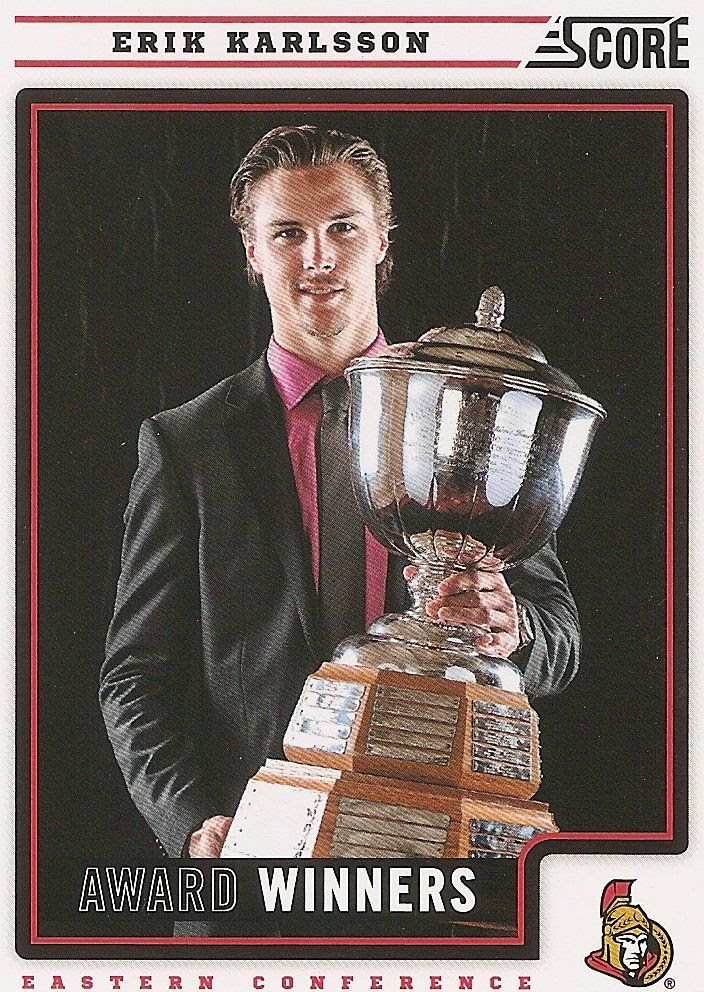 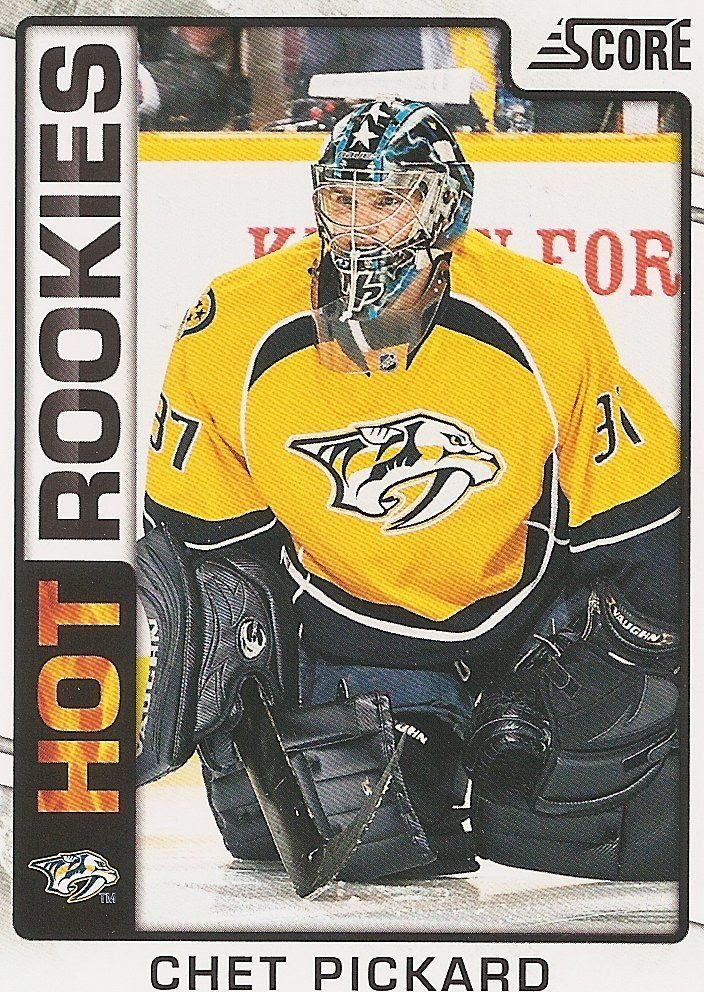 Hot Rookie cards again feature the newest crop of young NHLers. These cards have had a bit of a make-over. Gone are the computer generated backgrounds that these cards used to sport. The rookie cards now show the player on the ice in an action shot. The rookies found in Score are players that were not included in last year's Panini sets. Unfortunately for them, the Hot Rookies this year share the same fate as their base card brothers - they just don't look that good. The design is a bit generic, and this year I'm a bit at a loss as to who I'm looking to pull from this grouping. Last year had Cody Hodgson, and the year before had P.K. Subban. Maybe it's Chris Kreider of the Rangers this year... but the new rookie hype doesn't seem to be there.

Inserts/Game-Used/Autos -
Boxes of Score will come with a big pile of inserts. There are quite a few different inserts sets for hobbyists to collect and build. For collectors who are looking just for hits, Score is not the place to look. While there definitely are hits to be found in the product (in the form of rookie and veteran autographed cards), they don't come easy. 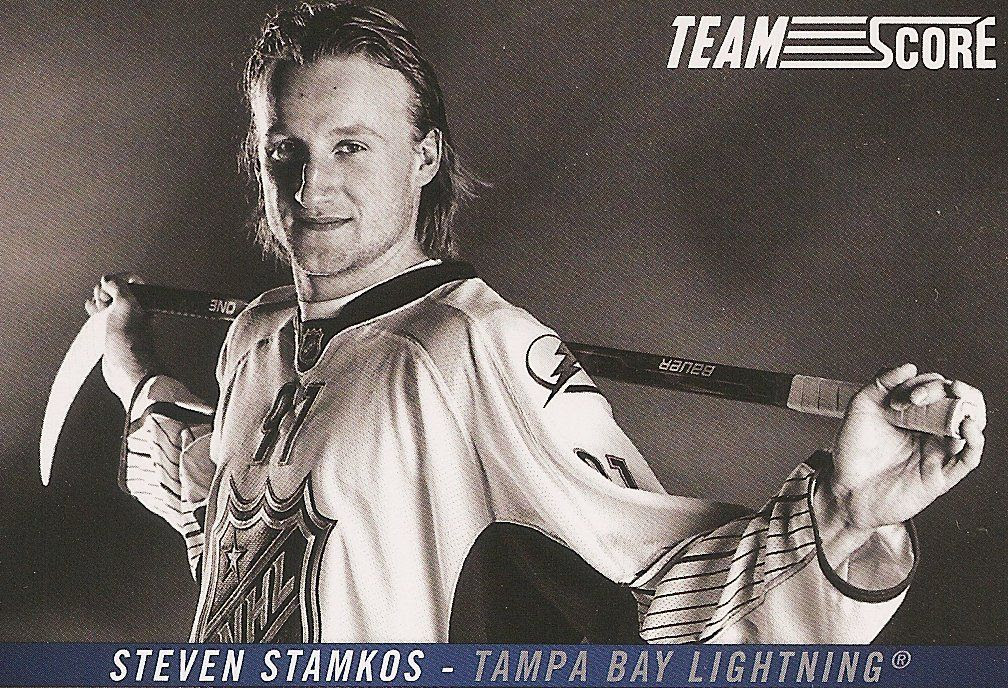 Though I didn't get any autographs in my box, I got some really classy looking cards featuring some stunning photography. The Team Score cards feature players in their All-Star jerseys posing for the camera. Though this is not a new concept, and it's something Score has done before, it is something that just works in a nice way. These cards are super simple and not overly thought out. They let the image do the talking... and that's really enough. 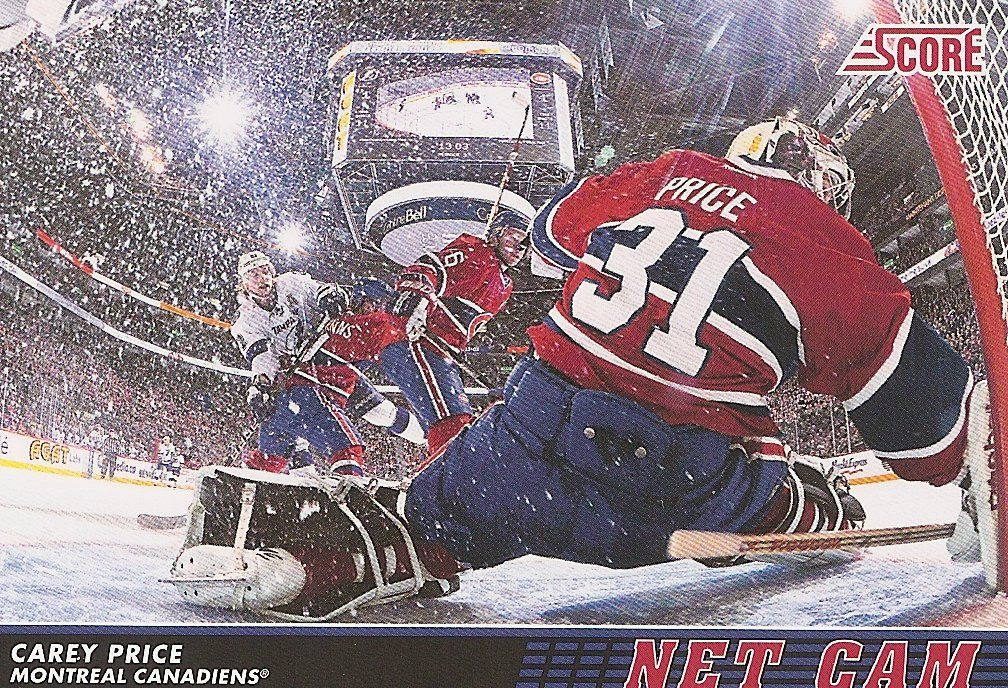 Net Cam cards also use unique photography to make a cool card to have. I really like this Carey Price card above. This card is all sorts of awesome. So much is going on in this photo! If the folks at Panini continue finding shots like this for their Net Cams, I can see them continuing this set on and on as long as they make the Score brand. These photos, no doubt, are what keep collectors coming back and building the set. 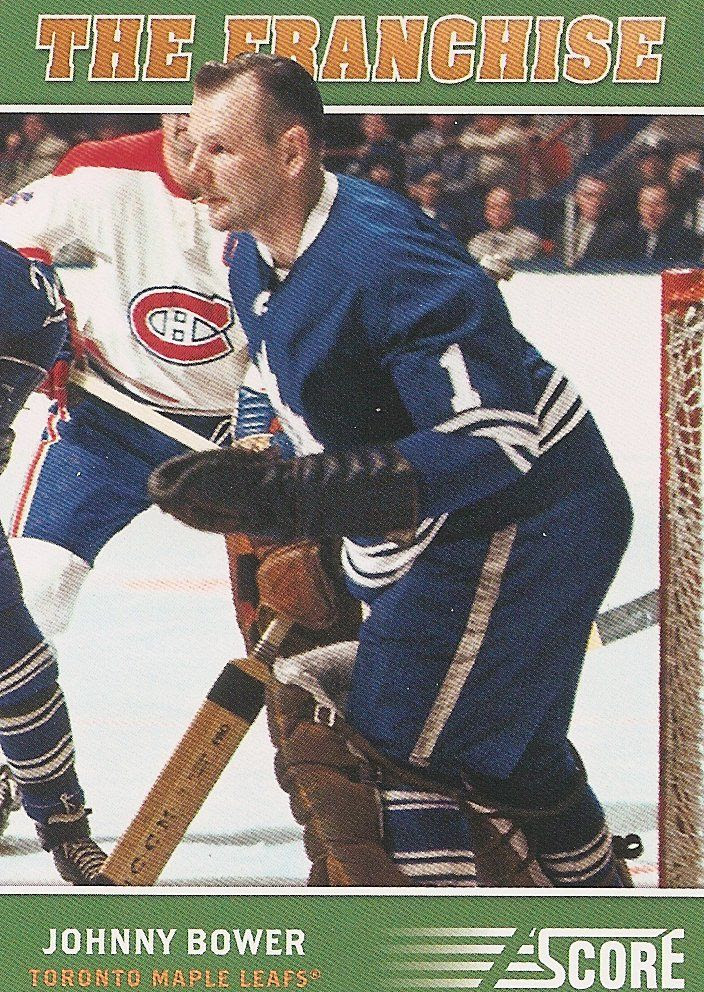 There are two types of The Franchise insert set to be found when busting packs. One type features the Original Six hockey teams. The color scheme of the card definitely brings up an older era of hockey. This Bower above is particularly cool as it shows him playing goal the old-fashioned way... sans mask! 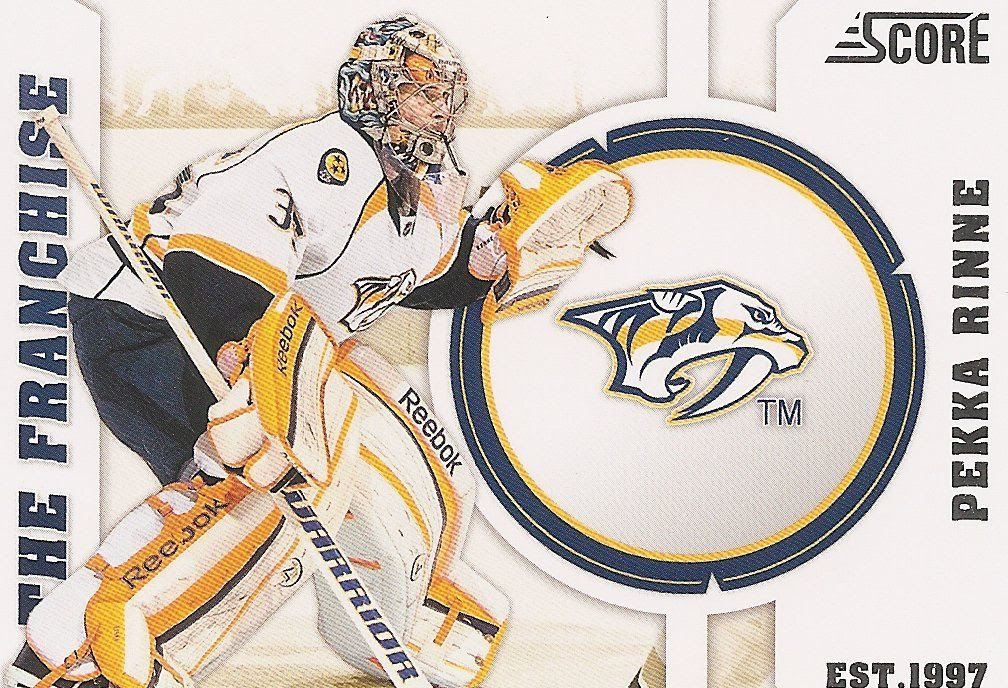 The modern Franchise inserts have a futuristic design that is quite nice. I was actually very surprised when pulling this card out of the pack. I'm not sure how many Score cards have this, but these cards have silver foil on them. I can't tell you how much that blows me away! I didn't think Panini would ever put foil on their Score cards, it's just not something they do, but yet here it is in all its shiny glory. 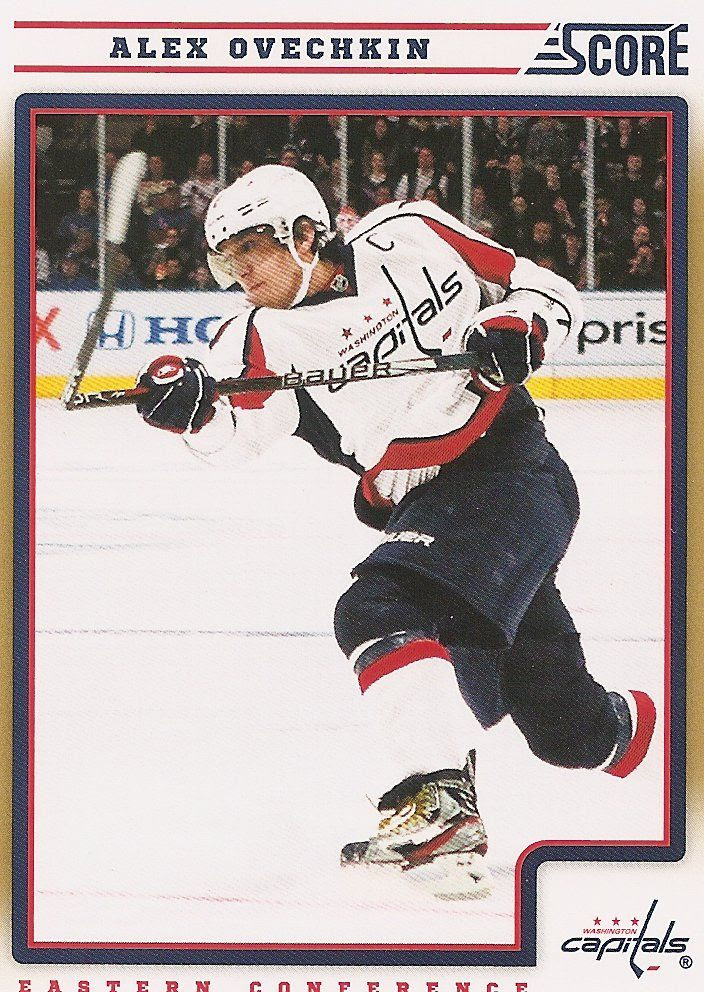 This year collectors will not find glossy parallel cards. Instead, Panini has inserted one Goldrush card per pack. The cards are differentiated by their golden border color. I didn't care for the Score glossies much, so for me these are a step up. For people who collect rainbows of players, these actually work really well because there is an actual difference in the look of the card. The glossies looked just like base when placed in penny sleeves so it became difficult to tell them apart. Making a return this year are Black Ice parallels too. These are much harder to find, and will be a tough challenge to find specific ones you may want.

There are more inserts to find in Score such as First Goal cards and Team Futures. They follow in the same vein as the basic inserts described above.

Overall Rating -
I'm not sure what it was, but opening up the box of Score this year just didn't cut it for me like it did last year and the year before. Though there are some great looking inserts to look at and find, it wasn't enough to make me excited when opening up the box.

In the battle of low-end products, I have to say the winner goes to Upper Deck's O-Pee-Chee. OPC is a pricier product than Score (I think by double... one dollar versus two), but I think I'd still rather get one pack of OPC over two packs of Score. The base cards, parallels, and inserts found in OPC are just stronger by far. For the past two years Panini has really stomped on Upper Deck's Victory as king of lower end. Upper Deck has taken that mantle back this year through OPC.

I would only recommend buying a few packs of Score to test it out and chase some of the better inserts (like Net Cams and Team Score/Futures). It's hard for me to recommend buying boxes and boxes of it - the value just isn't there and to be honest, I think you'd get tired of it very quickly. I say just stick to lose packs and blasters... that's probably the best way to go (unless you're a set collector... then go nuts with boxes).

And here's a video review of a box Panini sent me: