Panini comes out swinging with a brand new brand of hockey cards - Prime. Not for the faint of heart, Prime delivers amazing amounts of player-worn gear and autographed content. The sell sheets and previews of the product were amazing... so much in fact, that when I found out the product was delayed a couple more days than I was expecting, I could hardly stand it! Well, it's out now... and boy, this is the stuff that card collectors dream of. 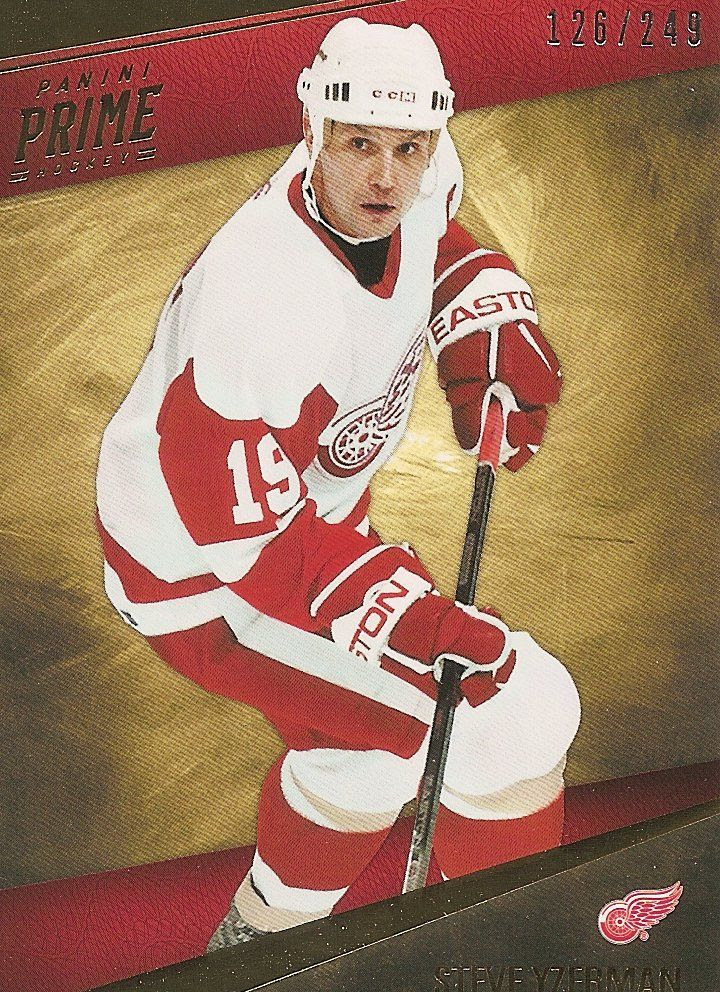 Base Card Design -
It can be a bit difficult to tell from scans, but the Prime base cards are of the highest quality. When I initially saw them, they reminded me a bit of Topp's Inception cards. But these cards have a generous amount of foil added to them that make them feel that much more premium than those from Inception. Each base card comes on a very thick cardstock (about jersey card thickness, not The Cup thickness) and is numbered to just 249. The design of these cards are pretty unique to hockey. Many hockey cards use a predominantly white background and scheme. It makes sense since the game is played on ice, but these cards don't figure white into the color scheme at all. Rather, Panini goes with golden hues with team colors as highlights. Very classy move... and very unexpected. I have to really give it to Panini this time. The base cards stand out from other hockey cards in a big way. 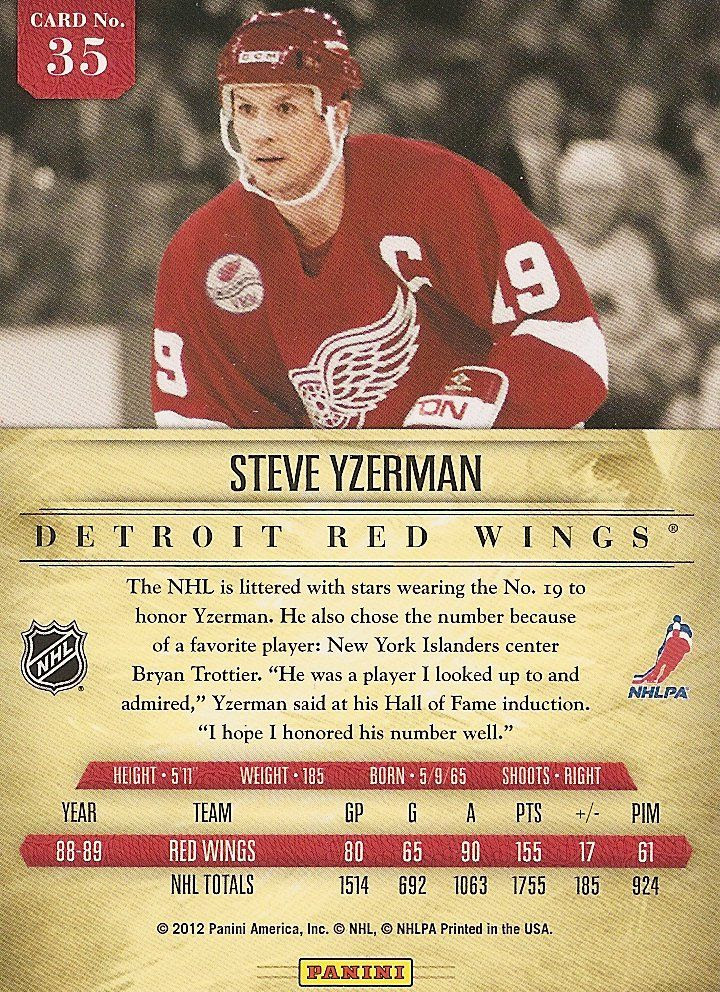 The card backs pair very nicely with the fronts. Mirrored from the front is the golden background but in a lighter shade. It provides the backing for the players bio and season stat-line. I get the sense that just as much effort was put into making the back as the front. Check out the the how well laid out the entire card is from top to bottom. Starting at the top is a beautiful (different from the front) photo of the featured player. And it's not that Panini just pasted in an extra photograph - see how the player is in full color while the background is set in a sepia-type color palette. That's some extra photo editing work there. And as you move down the back, you can just see how neat and elegantly everything flows - from the written bio all the way to the player's NHL totals. The whole thing just looks great. 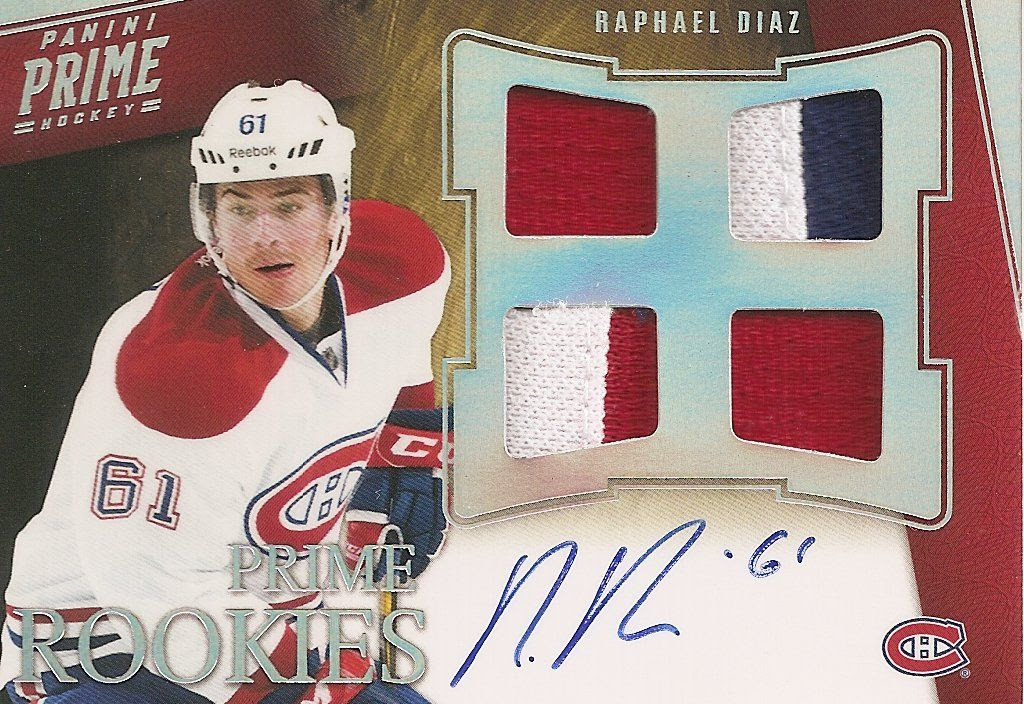 The rookie cards found within Prime all feature four pieces of player-worn gear along with an autograph. The Raphael Diaz shown above is not the standard rookie card - it's the parallel version numbered to 50 featuring prime swatches of jersey - but you can get a sense of the general design of the rookie cards by looking at it since it shares the exact same design as it's all-jersey brother. And these cards look amazing. Though in concept they are reminiscent of Upper Deck's O-Pee-Chee Premier rookie cards of the past, these cards have a more higher-end feel to them than those. The thickness of the cards and the generous amount of foil make these cards feel closer to The Cup than anything else. And if these cards are comparable to The Cup... that's really saying something!

Inserts/Game-Used/Autos -
With all super-premium card products, opening a box is all about the hits found inside. And you will find pretty much all hits besides the base cards within each one. Though the packs state only five cards are found within, there really are seven from what I've seen of boxes being opened - two base and FIVE game-used or autographs cards. Getting more than stated on the packaging is always a sweet deal! 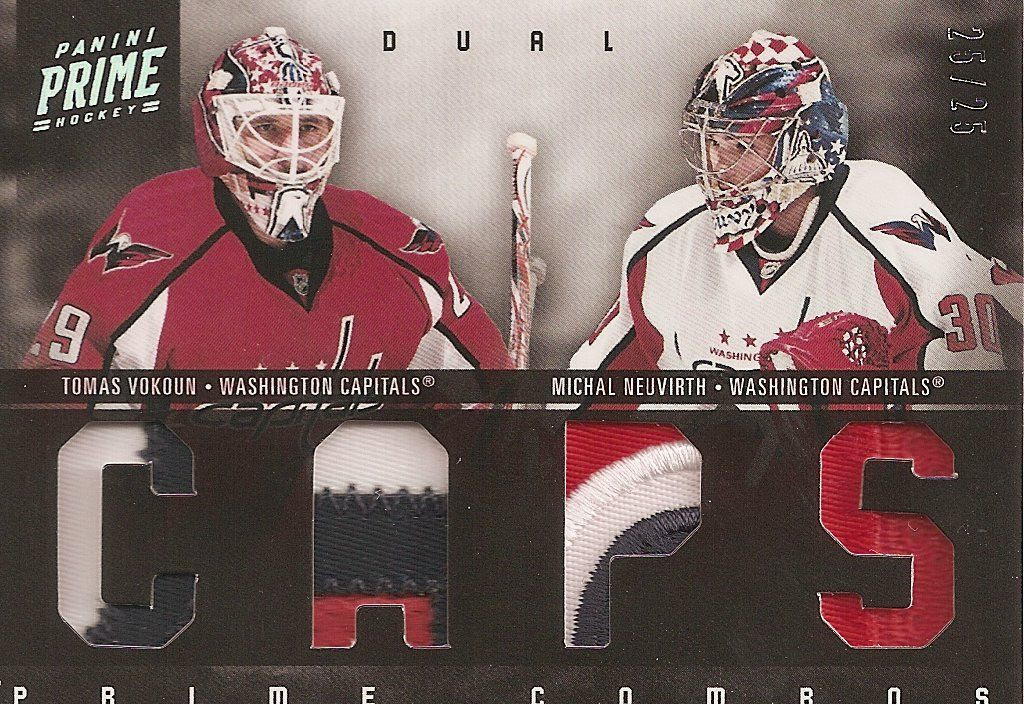 The 'standard' and most common types of cards found in packs of Prime are the Prime Combos and Trios cards. These cards feature two to three players per card and carry with it swatches worn by those players. I have never been a huge fan of the multi-player swatch cards, but these cards are done pretty well. The designers at Panini have come up with some pretty clever letter combos for specific players. One of my breaks featured Zack Kassian and Cody Hodgson on the same card with the word "SWAP" - pretty cool. Though the card above doesn't have a very zany name, the patches on it are really out of this world. Those two middle patches are NAS-&-TEE! 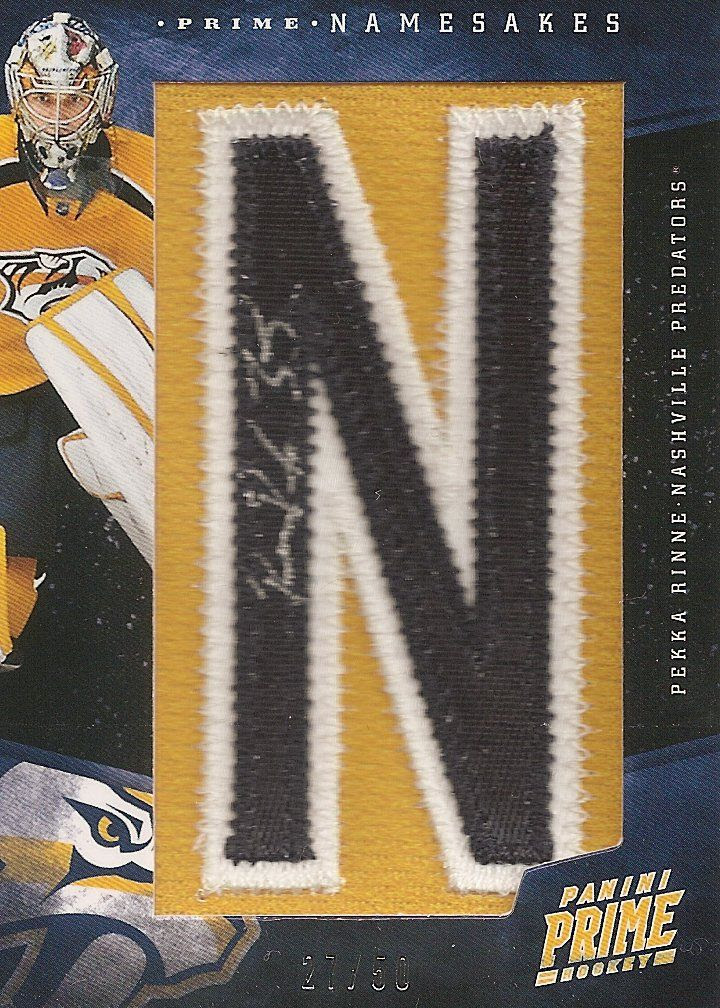 Prime Namesakes are letterman cards that feature player autographs. Though these aren't 'real' letters found on the backs of player sweaters, they are fun to put together. And actually, these types of cards command pretty high prices on the secondary market. It would seem that collectors actively try to complete the nameplates as best they can. Putting them all together is really impressive - especially if the player you complete has a long name. Prime does also have genuine game-worn letters packed in as well. Check out my break from Chri5784 in the video below. He pulls me an autographed Phil Kessel game-worn letter patch. That might have been the best card out of the entire case. 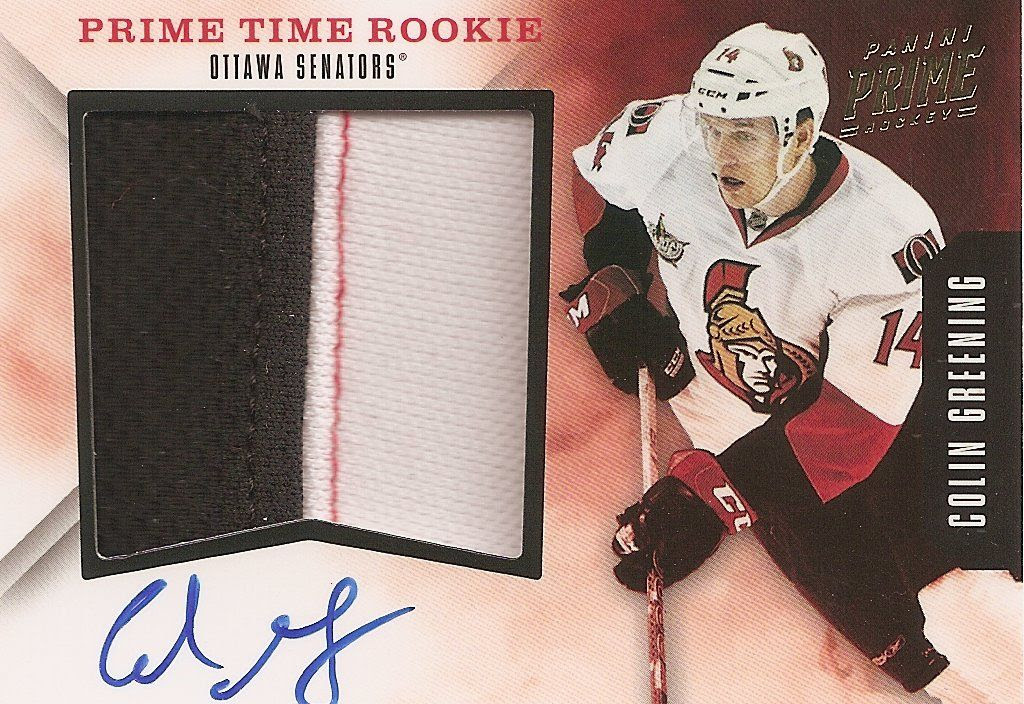 Prime Time Rookie cards showcase very large pieces of material from this year's rookie class. The enormity of the patch is only rivaled by the even larger Prime Colors Patch cards that literally can be put together to create the entire logo from a player's jersey. If you want to see a couple of those, again, I'd refer you to the video break below. Look for Prime Colors of Cody Hodgson and Bobby Ryan. 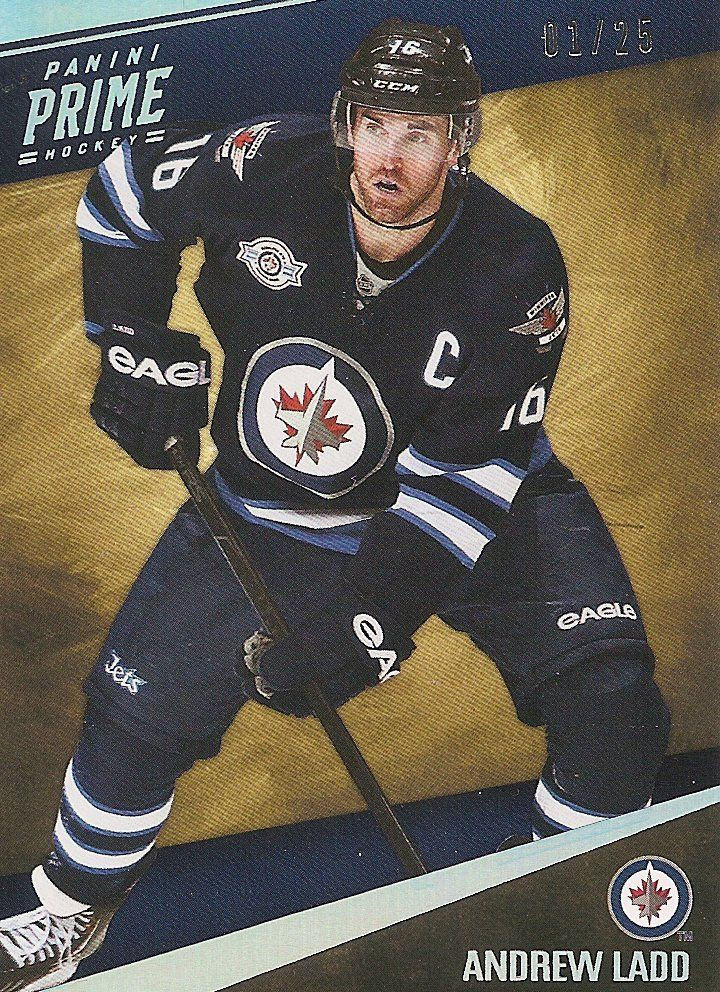 Perhaps less exciting, but equally difficult to get, are the base card parallels found in Prime. The parallels come in silver, gold, and black variations. The Andrew Ladd I pulled is the silver version numbered to 25. Though probably difficult to see in the scan, the foil is a silver holo-foil. It really makes the card pop - even more so than the already foil-y standard base cards. These will be a great challenge to track down for player collectors. Gold cards are limited to only five, and the Black versions are the elusive one of ones.

As you can see there is quite a bit of variation to be found in Prime. Collectors can find the entire spectrum of hits - from base parallels all the way to patch pieces that take up the entire card. Incredible.

Overall Rating -
I love Panini Prime. I was a little hesitant to like it too much for fear of disappointment before it came out, but it has lived up to my expectations - which is a rare thing to do nowadays. The cards are absolutely gorgeous in design and the variety of things to collect is just mind blowing. I really don't know how Panini can follow up a product like this!

And it's not only me... I've seen a hugely positive response from other collectors about Prime already. It's definitely a quality product. Even though the price per pack is pretty darn high - it'll set you back $200 - I feel it's worth the bust. If you can do it... DO IT!

I have to admit I was only going to get one case and one box of the stuff... I couldn't help myself and ended up getting one more box than I had planned to. It's just too much fun to open! Now I have to go on eBay and find all the singles I need... and sell all the singles I don't.

Prime. Go get it. Perfect score!