Back to blasters! Well, sorry to say the local Target is running out of different hockey retail products for me to buy! Oh no! But at least they still have some things I haven't officially done in a Retail Review yet... like good 'ol Upper Deck Series 1. This product is probably the most common hockey product found at retail stores. And I think it's the perfect product for companies like Upper Deck to sell via retail. The blasters have a satisfying amount of packs and cards within each box so that both serious collectors and casual ones can enjoy the pack busting experience. 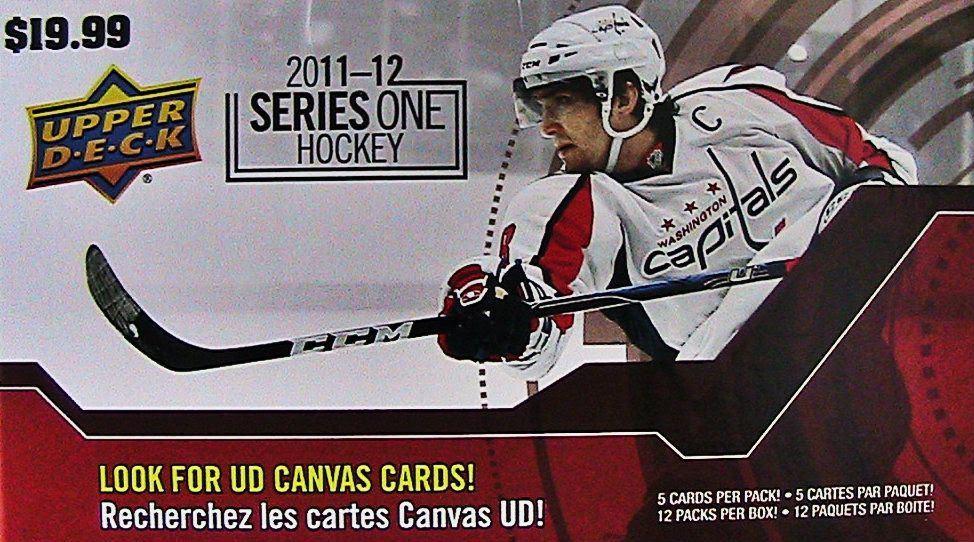 Basically for $20 the buyer of these blasters will get 2 Young Gun rookie cards as well as a few inserts. That's not too bad when you need a cardboard fix while grocery shopping. UD Series 1 has traditionally been the series to get (rather than the 2nd) because each year Upper Deck puts the most high profile rookies into the first series. This year collectors can find Ryan Nugent-Hopkins, Gabriel Landeskog, Sean Couturier, Cody Hodgson, Adam Henrique, Mark Scheifele, and more all in Series 1.  A few Retail Reviews back I opened up a Series 2 blaster and came up with a sad face when seeing the Young Guns I got. This time around I hope to fare a little better.


Review -
I opened up the 12 packs of cards pretty quick because I was in a hurry to see what Young Guns I had gotten. If this were me opening up the packs when UD 1 was freshly on the market, I would have taken a lot more time checking out the cool photography and design of the cards. But I would like to mention that these cards are still stunning to look at even so long after their initial release. The base cards are very glossy and high quality. Someone who may be a casual collector or a new collector purchasing this box would be very pleased at how nice the cards are.

In the box I received everything I expected to get in a blaster: 3 inserts and 2 young guns. A jersey card would have been nice, but the odds of getting one of those are 1:240 for blaster packs. YeeOUch! So yeah, I didn't expect that. My inserts were a UD canvas card, an EA Ultimate Team, and an All World Team card. Nothing really big with those 3 cards. I'll probably use those three as extras in trades I make with people. I will mention I was a bit disappointed in the canvas card though. The canvas cards usually have even a step higher level of photography than the standard UD base cards, but the the Shane Doan card seemed very pedestrian. He's just kneeling on the ice during warm-ups. Not sure why that picture was chosen. Oh well.

As for my Young Guns, I think I did well. I got one of the bigger name rookies of this year so that's always a good thing. Young Guns are always popular so adding more to the collection is a plus. And who knows, the scrubby ones that I have gotten over the past year may turn out to be diamonds in the rough one day.

Here are the top 3 cards in the blaster. Pretty obvious which one will be number one: 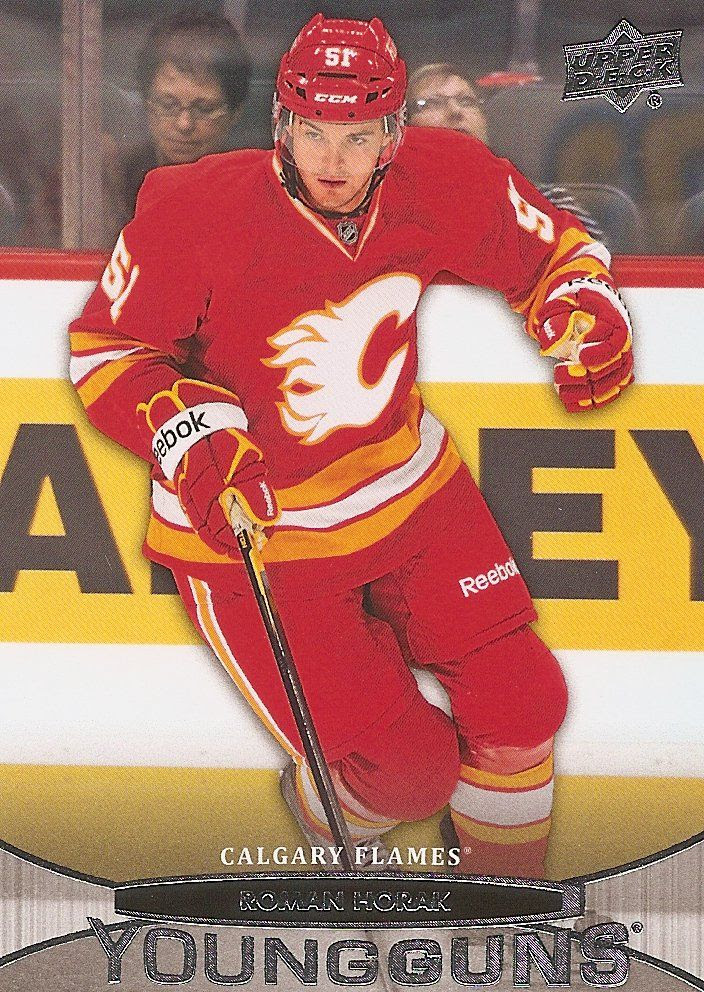 #3 - Roman Horak Card No. 204
The second best Young Gun in the pack gets the third slot. Roman Horak is a left winger and did decently well for WHL Chilliack according to his stats on the back. I'm not sure how his stint with the Flames was in 2011-12, but hopefully he'll turn out to be a decent player for them. In the meanwhile, this card will go in the big white box until further notice. 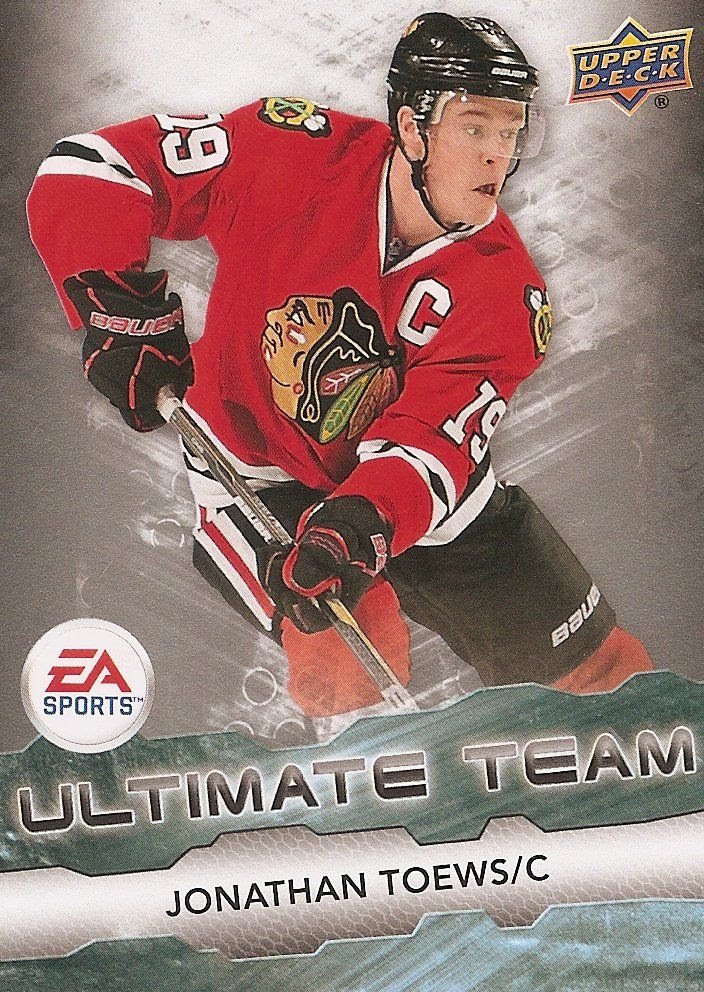 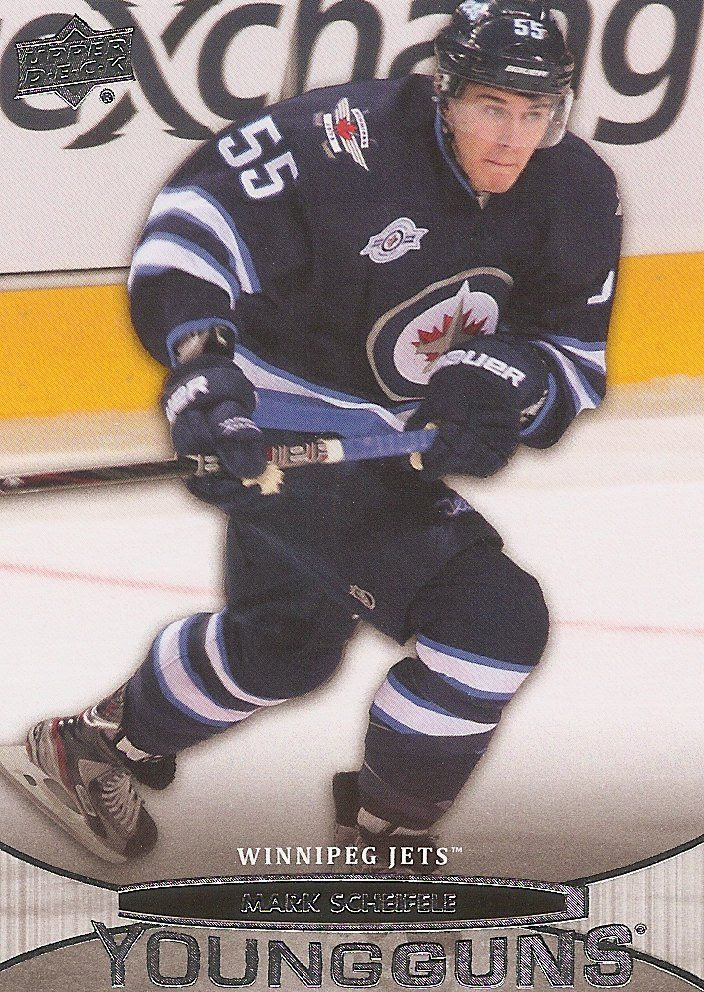 #1 - Mark Scheifele Card No. 248
This was the hit of the box. And possibly the box saver too. Mark Scheifele is a rookie that benefits from the fanatical Winnipeg fan base. He's their first rookie standout and has shown to have great potential. I've already seen on forums the excitement and collectibility that follows Scheifele. If he can play up to expectations, this will be a hot card for many a year to come.

Overall Value -
I'm OK with spending $20 for a blaster box of Upper Deck Series 1. The Young Gun potential is definitely the main draw here. Young Guns are just as good as jersey hits in my opinion. And in these blasters you get 2 of them. Anything else that comes in the box is just gravy. Upper Deck retail blasters are pretty much the standard for retail products. They are fun products that work well when no hobby shop is in sight. I would recommend getting a box if you want your hockey card fix.

Let me know what you thought of my Series 1 blaster box down in the comments below. Have you ever gotten anything good from one of these? I'd love to know!


Every Sunday look out for another exciting installment of Retail Review!
Posted by luke. at 8:00 AM