Well... last week's episode of Retail Review was pretty spectacular. I was wondering how long it would take before I got something of actual significance or worth. The answer to that question was obviously 4 weeks. With last week's Ryan Nugent-Hopkins rookie jersey autograph card I could have called it a day with this series. But no. I'm going to keep going. Will I have two amazing weeks of retail product breaks in a row? Let's find out! 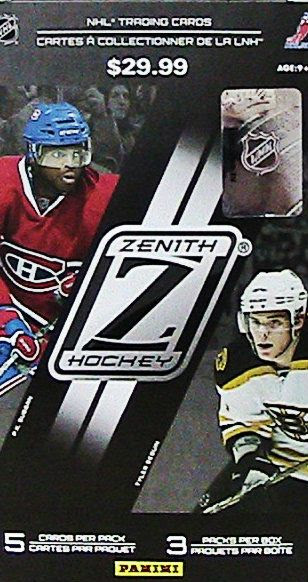 Here's another high-roller retail product. At $29.99, it's a pricey proposition. Full hobby boxes of Zenith used to be around $100. At this point in time, hobby boxes can be had at under $60, the price of only 2 blasters. Though it doesn't state it on the blaster box, I believe there is a hit per blaster. So for thirty dollars you are paying to get one hit - probably a plain jersey card. Not a great deal if you ask me. Hobby boxes have 3 hits per box as well as the inserts and the box topper rip-card. For me, the box-topper is probably the only reason to buy Zenith. I pulled a National Treasures rookie card numbered to 99 in a box once and that was a thrill. Not a chance of that happening here though. Still, I wanted to give this blaster a shot. I was prepared to be disappointed.

Review -
I can't help but to compare my Zenith opening experience with the Certified experience from last week - especially since I paid the same amount for each blaster. I have to say that compared to last week, this was a big letdown. And not because I didn't pull a huge hit. For $29.99, you get three packs of cards that don't feel very premium. The Certified base cards are shiny and foil-y. They feel and look modern. They are premium. The Zenith cards are flat and boring - maybe a step above Score... if even that. In any case, they just don't have the quality of paying thirty dollars for them. Simple as that. My one hit, a dual jersey of the Penguins, looked nice and had a pleasing design, but even that card left me wanting. I'll bring that up when I get to my top three though. All in all, I got the feeling of getting gipped with this box. I'm probably not going to be dipping in this well again.

For my top 3 cards this week I will pick the 3 best cards out of the break. Though I got three insert/hit cards in my break, I felt that one did not warrant inclusion in the top three. Instead, I had to go with a base card to fill in for it. 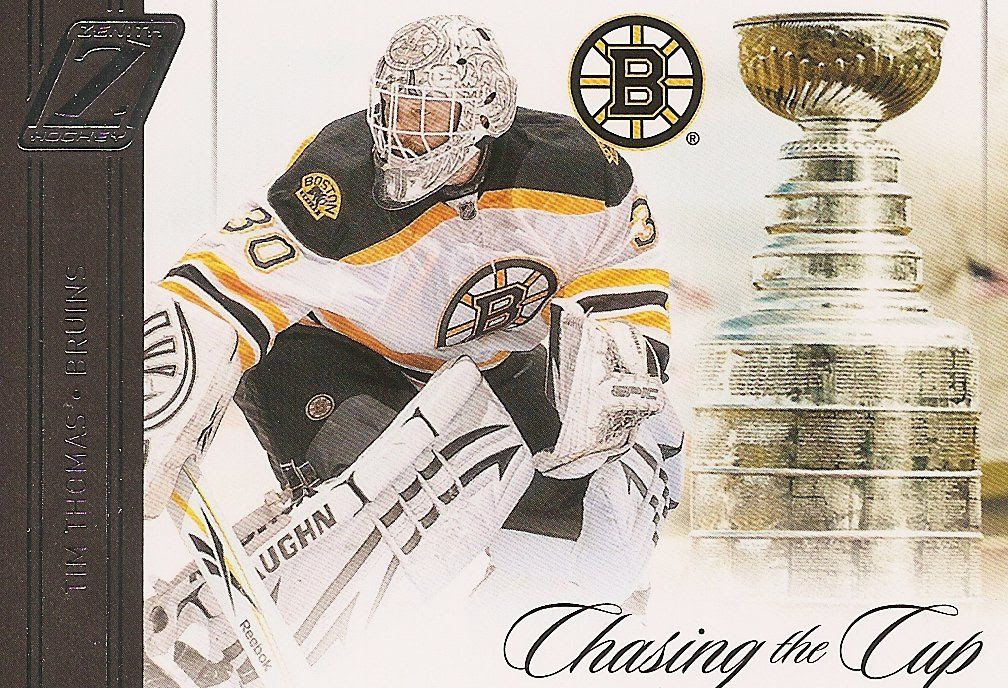 #3 - Tim Thomas Chasing the Cup Insert Card No. 13
The Chasing the Cup insert cards are well done. I've always liked cards featuring the Stanley Cup, and this one does a nice job of showing it off along with the player. My favorite aspect of the card, besides the Cup image, has to be the 'Chasing the Cup' script. It just looks so darned elegant! Perfect for the most coveted trophy in all of sports. My only complaint about this card is the player on it. I'm not a Tim Thomas fan - wish I pulled a different player. That's why this card lands at three. 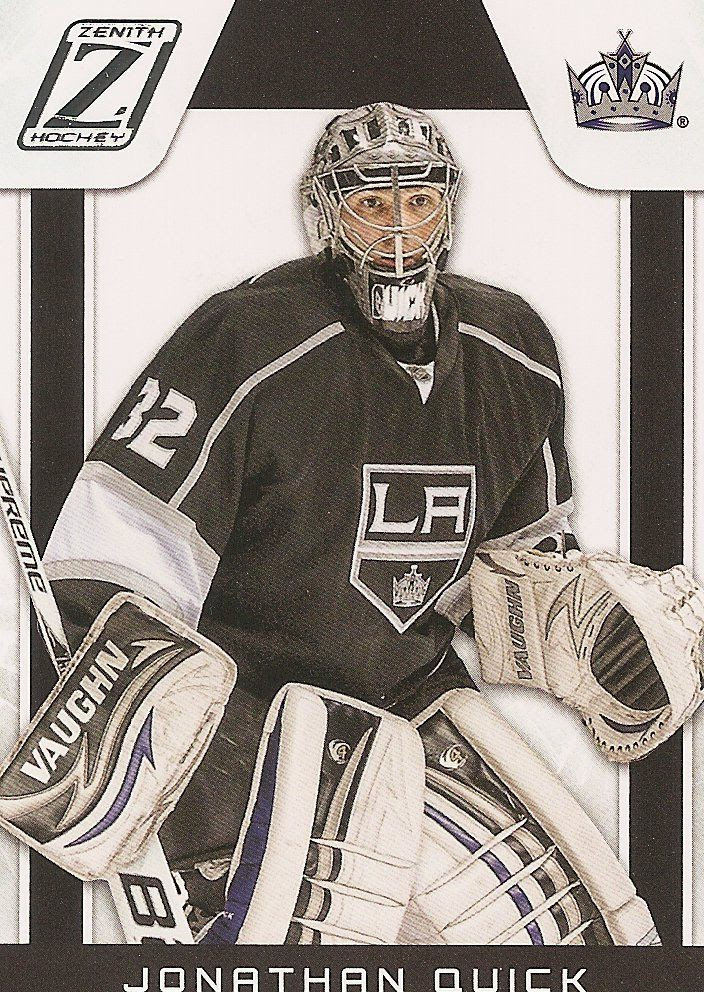 #2 - Jonathan Quick Card No. 16
I realized that I don't have much of Jonathan Quick in my card collection. The Stanley Cup wining LA King's talented goalie doesn't have a ton of cardboard so I was glad to pull this card and add it to my collection. Though I have stated numerous times that I do not like the base card design here, it has grown on me a little bit over time. 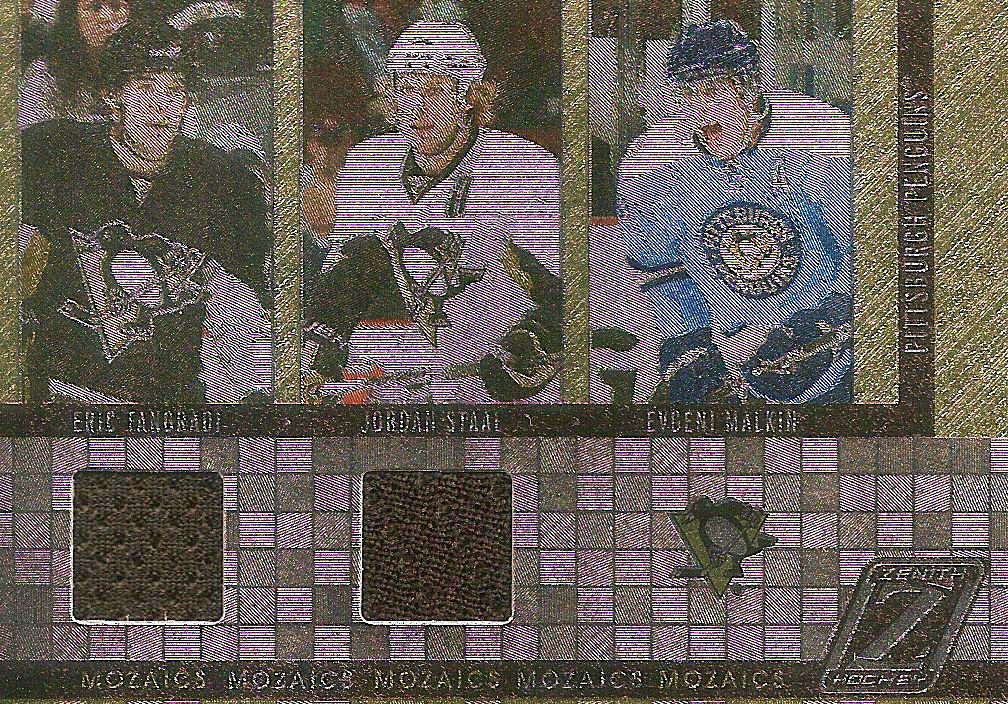 #1 - E. Tangradi/J. Staal/E. Malkin Mozaics Dual Jersey Card No. 16
As my only hit in the box this card by default gets the number one position this week. This is actually a pretty nice card except for one thing which I'll mention at the end. In terms of card design, it's nice. The card doesn't scan well, but in person the foil looks great and the textured mosaic where the jerseys are creates a sweet visual. I'm also pleased that the card features some quality players in Malkin and Staal. Tangradi was a rookie that year so we'll have to wait and see how he pans out - but he is with a couple greats that help the card hold up. The most disappointing this about this card is the lack of Malkin's jersey on it. The card looks completely incomplete without it. I have actually pulled this same card with only Tangrai's jersey featured. And that looks even worse. If Panini could re-make these cards, I hope they would ditch the incomplete jersey idea. I say go full or don't do it at all. This missing jersey stuff is really half-@$$ed.

Overall Value -
$29.99 is way too high a price to pay for a Zenith blaster box. The smart thing to do would be to just save up a few more bucks and get the hobby version. Hobby boxes have come down to at least reasonable levels. The sad thing is that there is nothing really worth pulling in Zenith. Of course there are some very top level cards like an autographed rookie of Taylor Hall, Tyler Seguin, Jordan Eberle, and PK Subban.. but outside maybe those four cards, every other 'hit' is going to be a miss - especially at the thirty dollar mark. If you see Zenith at the store just walk away... quickly.

Let me know what you thought of my 10/11 Panini Zenith blaster box down in the comments below. Have you ever gotten anything good from a Zenith blaster? I'd love to know!


Every Sunday look out for another exciting installment of Retail Review!
Posted by luke. at 8:11 AM