After literally months of delays and waiting, SP Authentic has FINALLY arrived. This popular brand of hockey cards is one of the 'must have' products every year. It has been agonizing waiting for its release amidst continual release date push backs. Well, the wait is over and now collectors can get their hands on the celebrated Future Watch Autographed rookie cards and other SPA staples. 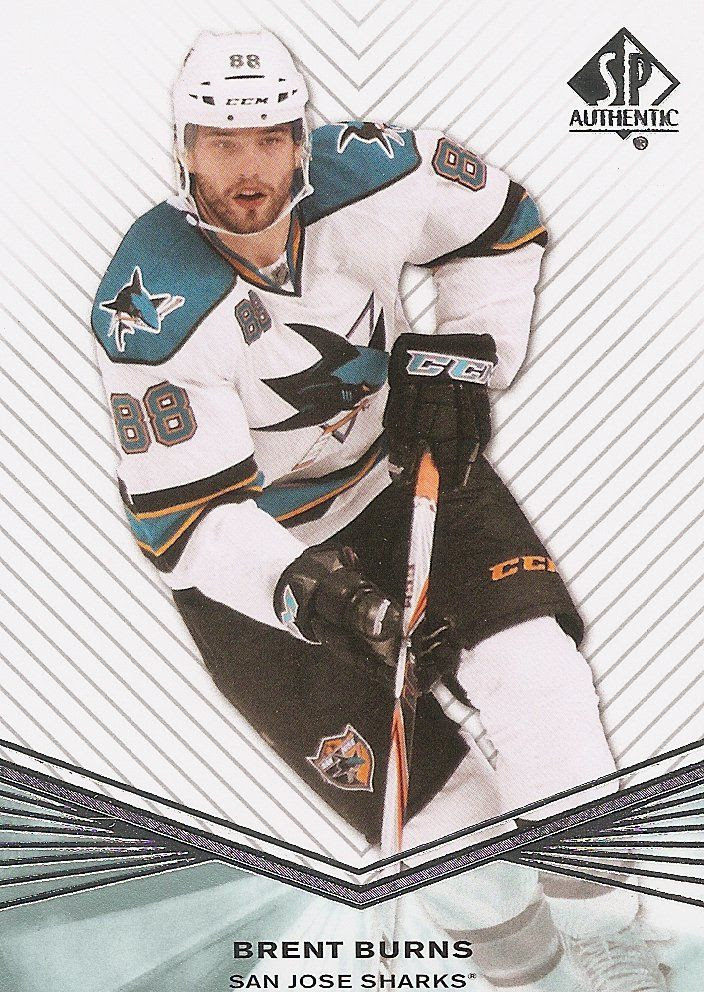 Base Card Design -
I have always loved the SP Authentic base cards. Some collectors have called them plain and boring, but to me, they are fabulous examples of what a modern hockey card should look like. This iteration is no different. The simplicity of the color scheme and geometric design work extremely well here. Each card has just the right amount of foil highlight, the font is just right, and the players pop off the card. When I first saw them I was really blown away by how stunning they were. In my review of Panini Contenders, I compared that product to this one. I have to say that in terms of card design, now that I see SPA up close, Contenders still has a ways to go because UD design is still up front and pacing the rest. 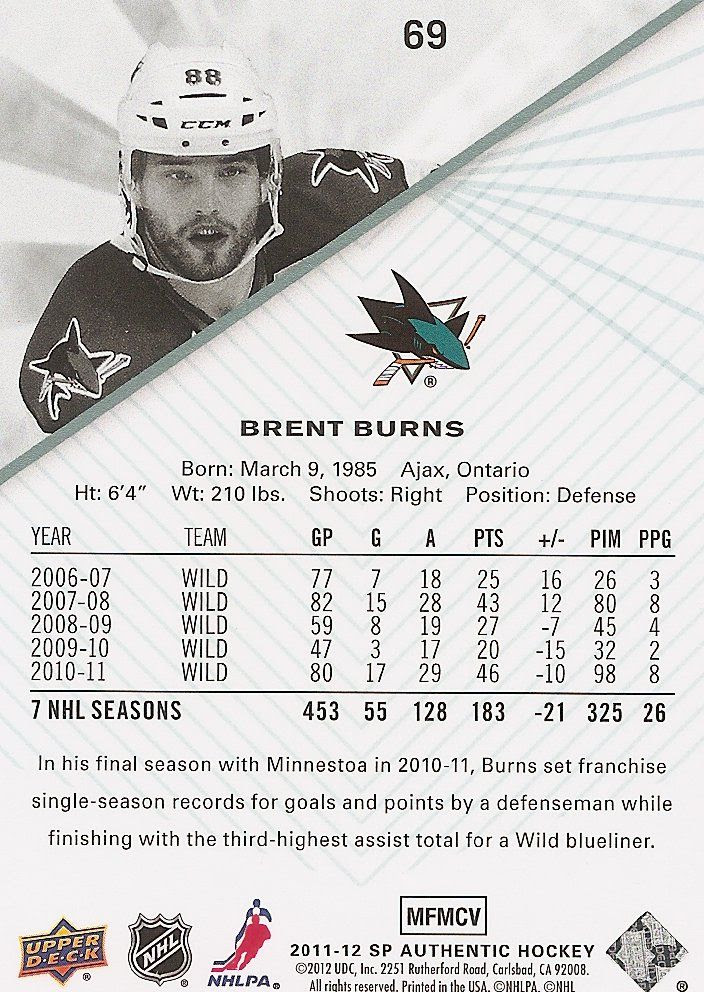 The back of the base cards have been designed with as much attention as the front. I am a big fan of the dynamic angles that the lines make. The design truly matches the front in a way that doesn't replicate it exactly. The backs will feature all the relevant player vitals along with up to 5 years of statistics. UD has also included a short write up on the featured player's achievements. 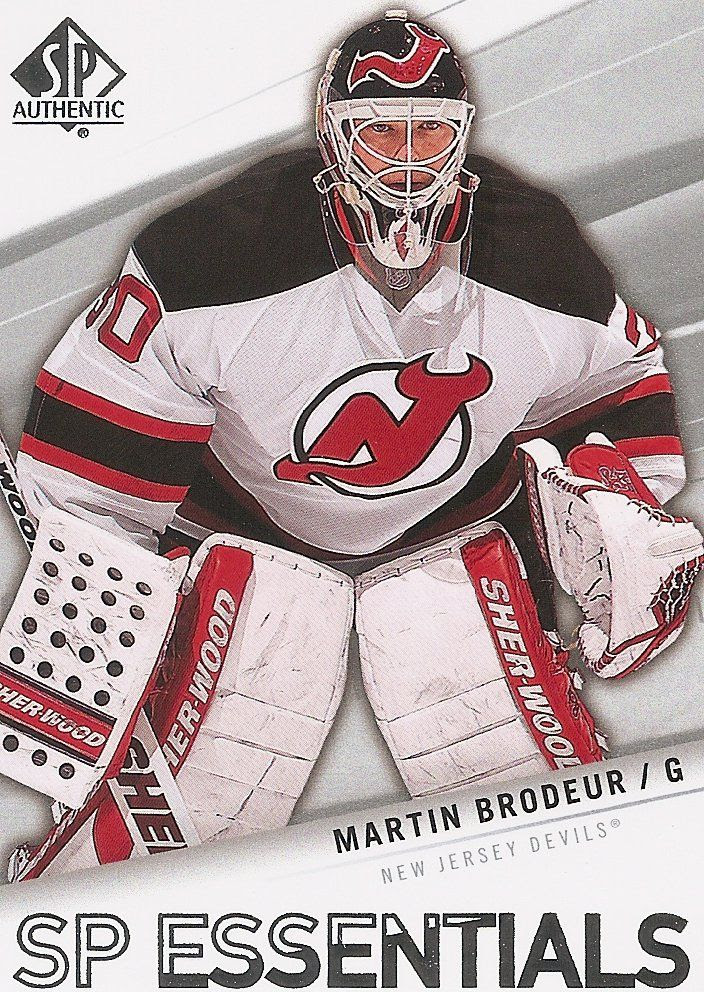 SP Essentials have again returned to the main SP Authentic set. This yearly limited subset has always given the main set of SPA a higher level of challenge to complete. In previous years, the Essentials were serial numbered. This year they are not. I'm surprised by this decision by Upper Deck. The serial numbering was a key point for these cards being collectible. I feel that without it they will not be taken as seriously by collectors. In terms of how the cards look, the SP Essentials are pleasing to look at, but they do remind me of an older SPx design for some reason. 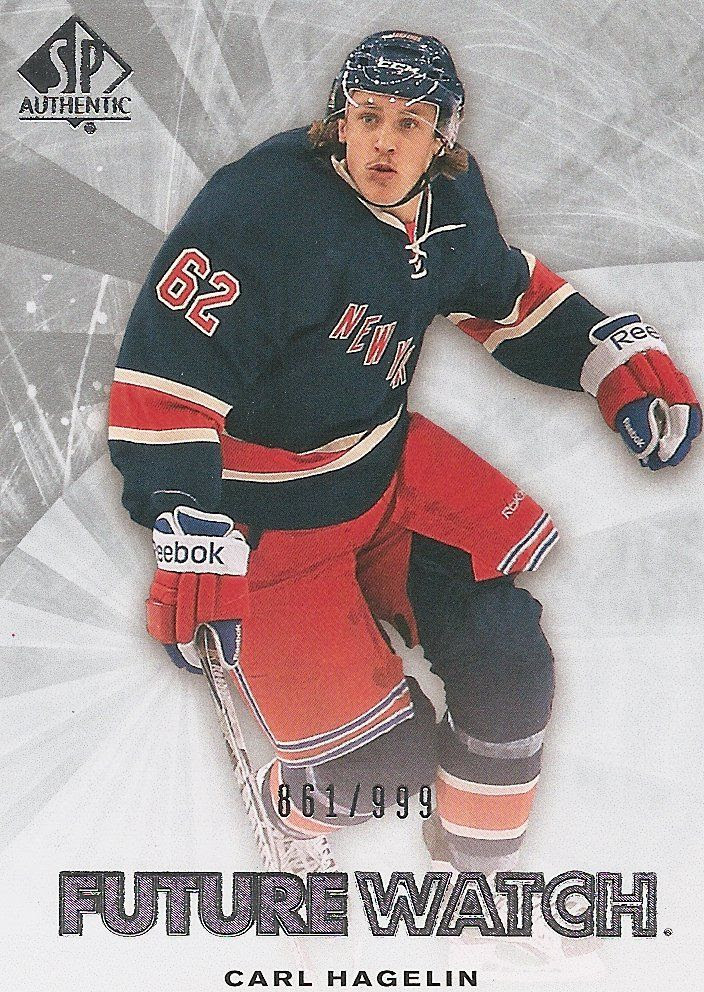 As with all other years of SP Authentic, the rookies are broken up into an autographed group and a non-autographed group. The non-autographed Future Watch cards showcase the rookies on a dark grey ice background - again, a nice looking card. And each card is limited to only 999. The non-autographed FWA cards tend to be rookies that are not as hyped or celebrated as the autographed ones, but here we actually have some that probably should have featured an autograph - Carl Hagelin being one of them. But this could be due to the nature that SPA should have been out in March so the decision on which players got what cards may have been determined far in advance. By the way, if you wanted a Carl Hagelin auto rookie you would have to go to Contenders for it. 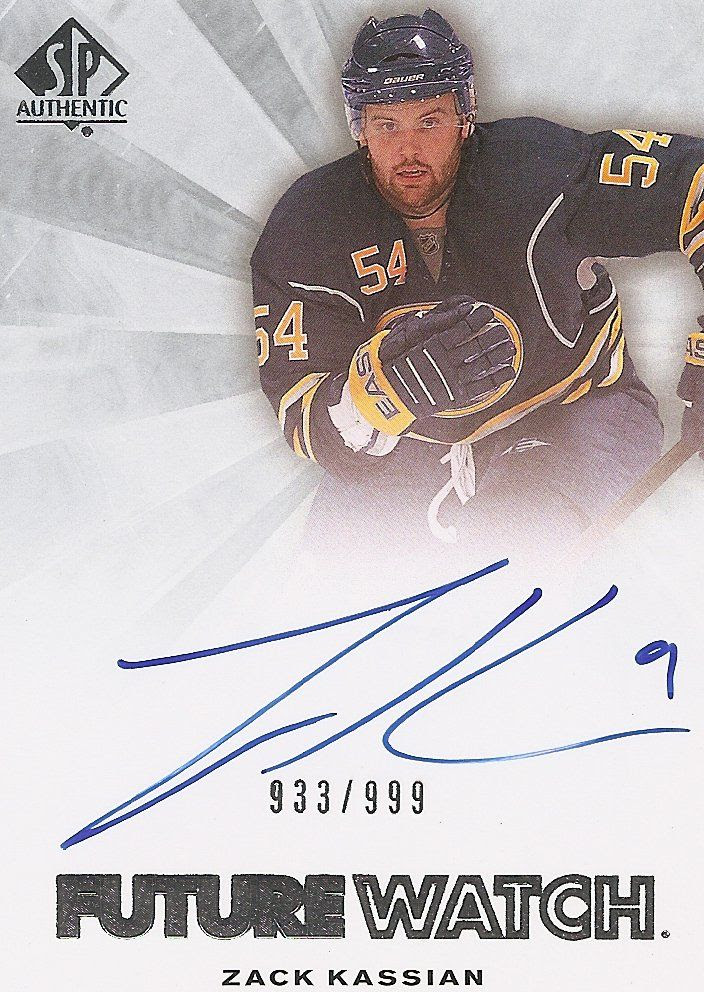 The autographed Future Watch auto rookie cards are, as the rest of the main SPA set, very well done in terms of their look and design. The autographed versions of the FWAs are brighter than their non-auto counterparts. Instead of a broken up ice look, the background 'beams' outward with the player being the source of radiance. Pretty cool. The portion of the card devoted to the autograph is a faded white area. It's a great place for an autograph. Some card designs have an artificial looking rectangle for the autograph placement. This can create a jarring effect that makes the design looked forced. That is definitely not the case here. With these cards, the space for the autograph is almost organic in nature in terms of how it is done. Seamless is another good word to describe it. Everything from the top to the bottom of these FWAs is pretty well done perfectly. One of my favorite FW designs for sure.

Inserts/Game-Used/Autos -
The main meat of SPA is the Future Watch Auto card, but there are many other inserts and hits to be had when opening up SPA. This year Upper Deck has proven again that their cards are top notch and desirable. Each box of SPA will contain 3 hits and a smattering of insert cards. FWAs count as hits, of course. 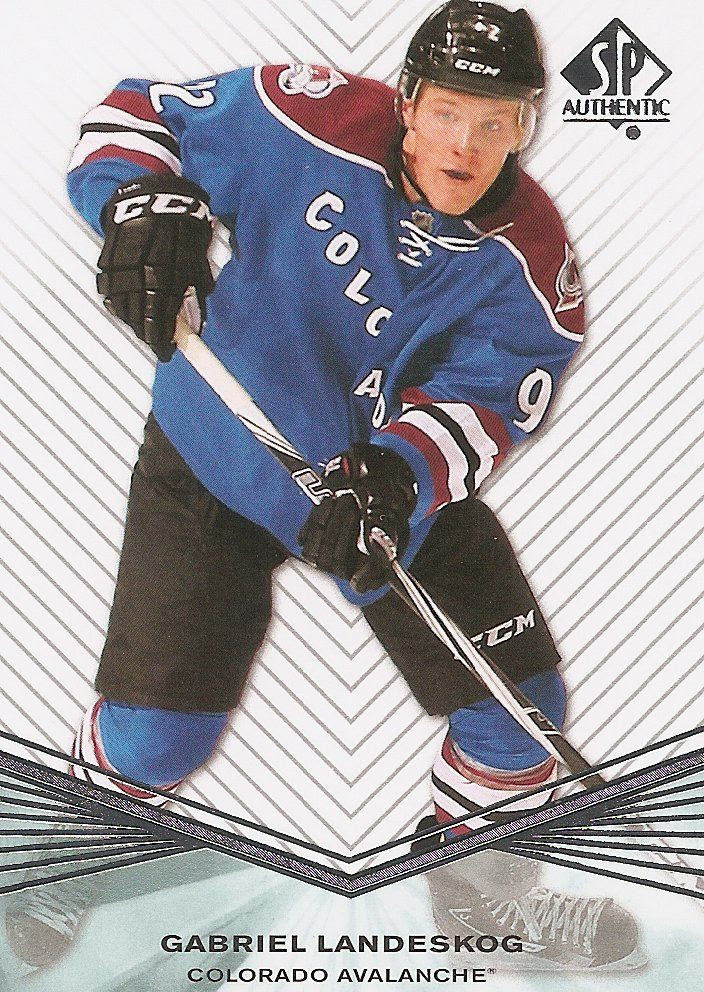 Here's a pretty common insert card shown above. Wait... what?!?! But that's a base card! No. It's actually an insert seeded 1 in every 2 packs. You'll notice that player pictured is Gabriel Landeskog, a rookie. Upper Deck this year has put in a rookie extended insert set that shares the same design as the base card. The only difference is on the back. Each rookie extended card has an 'R' alongside its numbering... and there is no write up below the player stats. I'm puzzled as to why Upper Deck decided on including this inset within SPA. To me, it seems absolutely unnecessary. For collectors of rare cards, there are red foil versions of these cards serial numbered to just 10. So that might be something to chase. But as I said before, I'm just not sure why this set is here this year. 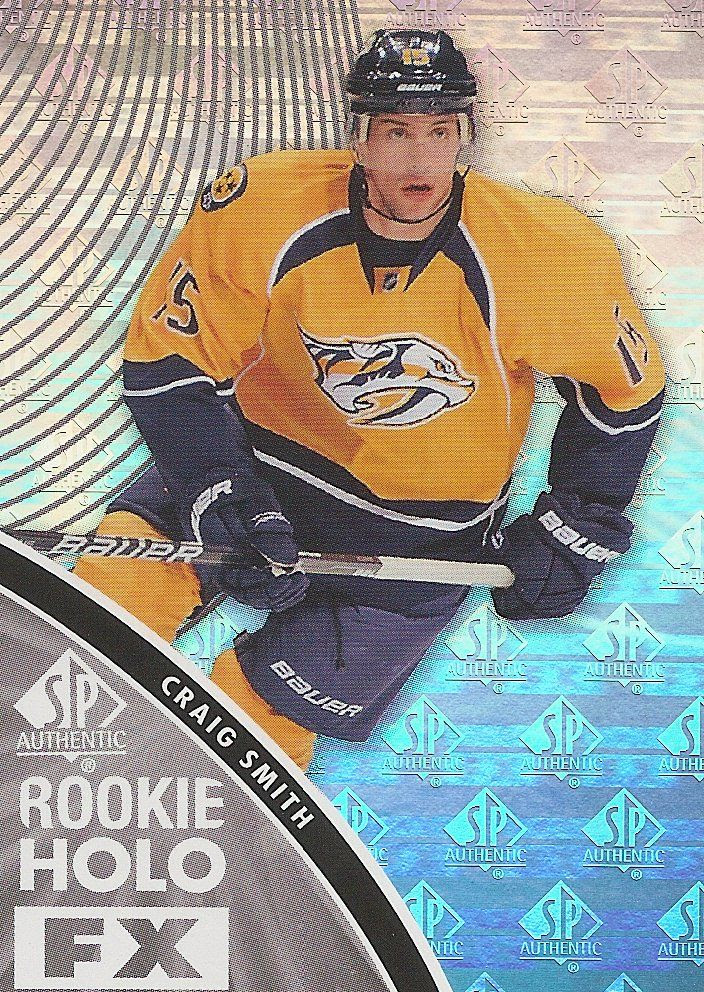 A more familiar insert card is the HoloFX foil card. These have been in SP Authentic since the very beginning. Once these cards were heavily chased, but now are pretty much afterthoughts. Interesting to note that this year's HoloFX series features only rookies; there are no veteran HoloFX cards. As collectors have lost interest in these cards, it seems as if the designers have also lost some interest in them as well. The cards don't look particularly outstanding and don't have any cool features. I remember a time when the HoloFX cards had a rotating face of the player on it. Sometimes players would smile or wink at you as the card turned. Obviously that takes some work to get done. That kind of effort is too much for an old insert like this I think. 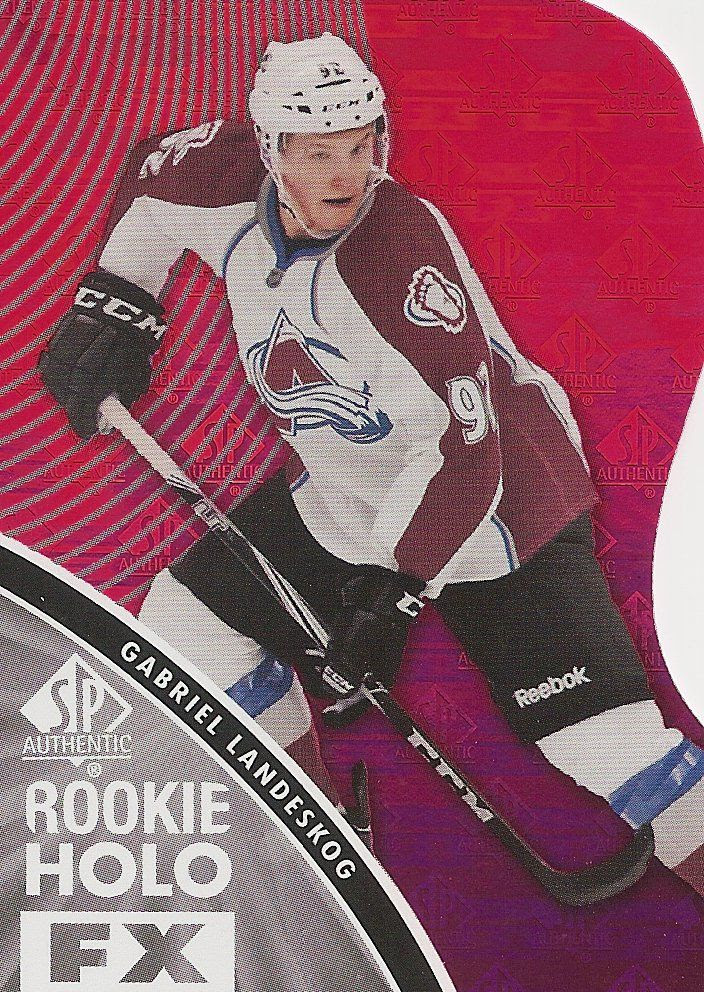 Seeded 1 in 288 packs are the die-cut versions of the HoloFX cards. Though these cards are tough pulls, they tend not to go for too much on the secondary market. I do like that the die-cut here is made to resemble an 'R'. I'm assuming that they did this intentionally because all the HoloFX are rookies. It's better than die-cutting a design of no relevance to the card as is done on some other products. 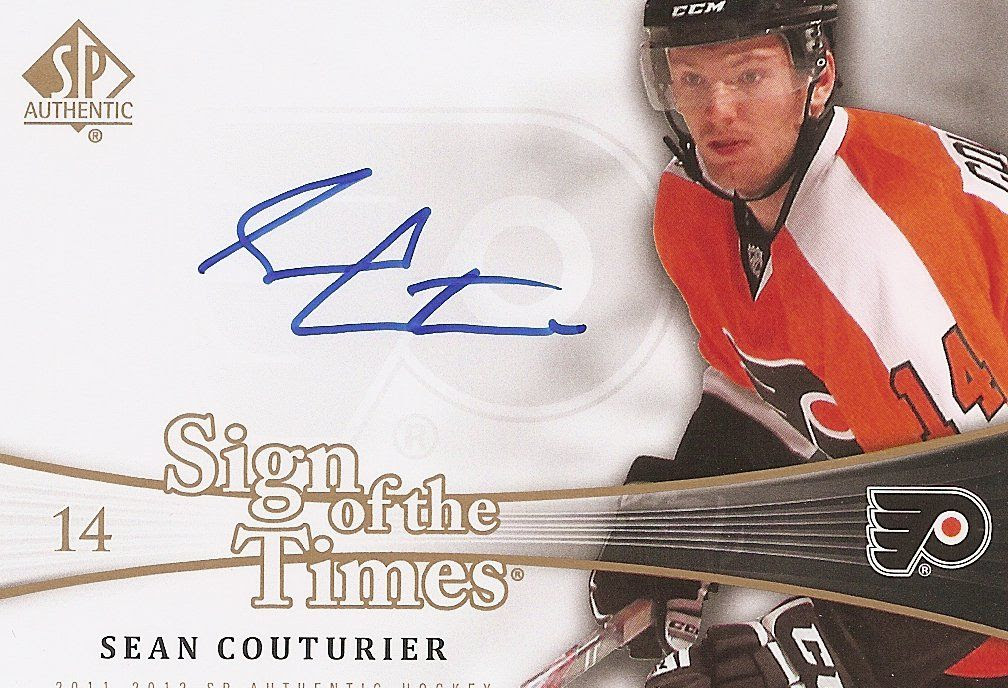 The Sign of the Times autographed cards are back this year and they continue to look very nice. Upper Deck has always produced good looking autographed cards for SP Authentic, and that tradition is continued with this year's set. Aside from just single autographed cards, collectors will find double, triple, quad, five, six, seven, and eight autographs on a single card. All of this is very cool, but collectors have found that getting the better autographs have proven to be difficult as star players are much tougher to pull than lesser ones. Odds range from 1 in 41 packs for the lowest group to 1 in 1,560 for the highest group, which would be group A. Cards with multiple autographs have even steeper odds.

Collectors will find all sorts of hits when they open their boxes of SP Authentic this year. Making a return are the Chirography, Marks of Distinction, and Immortal Ink sets. There are also rookie and veteran patch autographed cards as well as a new set called Signature Stoppers that obviously focuses on goalies. Collectors will even find 'left over' cards from last year's SPA set inserted into boxes as well. These are cards that Upper Deck didn't get in on time last year so they were inserted into boxes this year.

Overall Rating -
SPA is SPA. If you've been collecting hockey at all in the recent past then you'll know what to expect out of this product. For me, I love this product mainly based on it's design aspects. The set always has a pleasing, modern look that entices me to buy it. I will in fact be going for the main set once again this year. I had also wanted to go after Contenders, but after looking at SPA, I feel that SPA is the right way to go for me.

SPA boxes have always been extremely hit or miss. Misses are REAL MISSES. So I caution collectors when purchasing a box of it. These boxes will range from $100-120, but often you may only get $20 of value out of it - particularly if you are shorted a hit, get cruddy Sign of the Times autos, or FWA rookie cards with low potential. Just know what you're getting into when buying the stuff!

For me, I always like to buy between 2 and 3 boxes and then collect the rest of the set off eBay and the secondary market. But I always hold out hope that I will get something amazing in the few boxes I do buy for myself! Best wishes on your breaks of SP Authentic. I KNOW you will get some!