Continuing its trend in producing specialty hockey themed cards, In the Game brings us Broad Street Boys. Here is a unique product that focuses only on one team, and one team alone: the Philadelphia Flyers. Obviously this is a GREAT product for Flyers Fans. But I was curious to see if this box would bring satisfaction to a collecter who really doesn't root for or have any real interest in them. Will this product win me over, a San Jose Sharks fan? Will it appeal to me? Will it make me want to buy some more? Let's see! 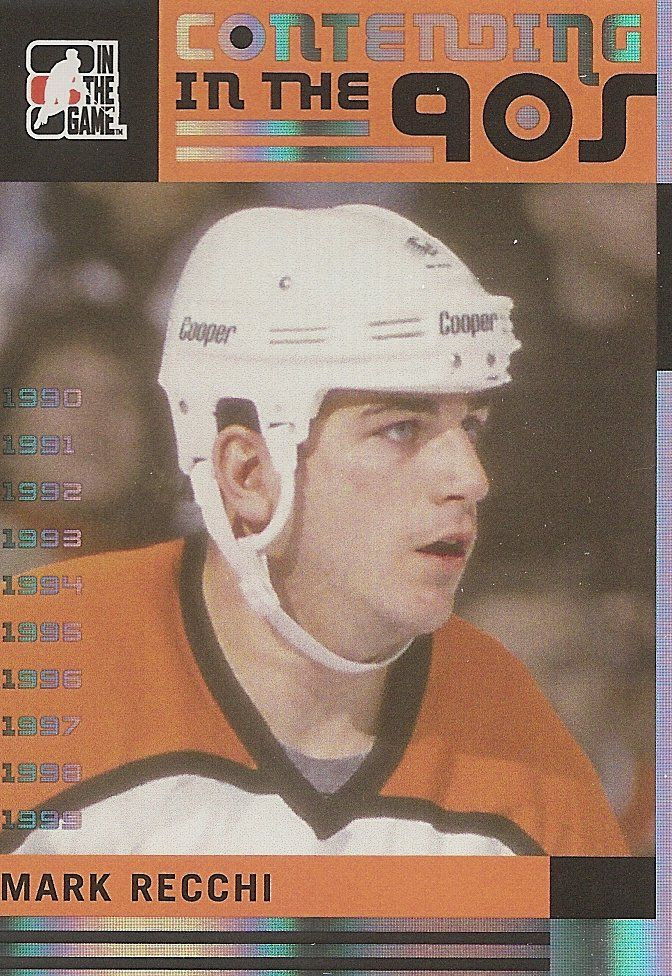 Base Card Design -
Each box/pack of Broad Street Boys will come with 8 base cards. The base cards vary in theme depending on which era or facet of the Flyers the player represents. Despite having these different themes (and designs), the base cards have the same general feel and look to them. So rather than evaluating each subset of the base set individually, I'll take them all in as a whole. 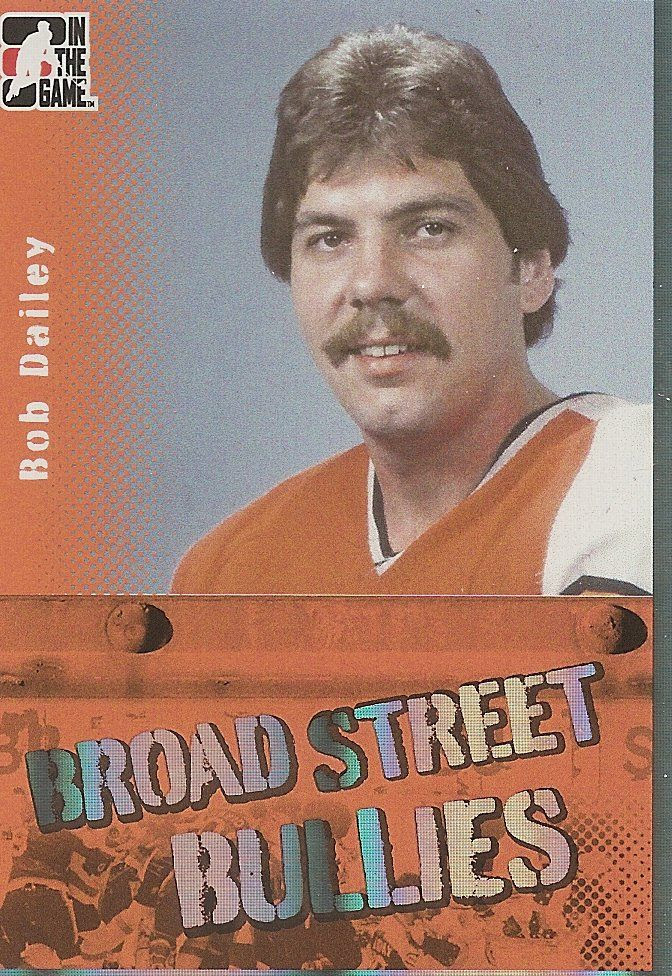 I have to applaud ITG in their effort to 'up' their base cards. We saw in their earlier Captain-C release that foilboard was chosen rather than plain card stock, and this premium aspect was used here in Broad Street Boys as well. The base cards have a completely foiled surface that refracts light nicely. When the base cards are tilted you can easily see a rainbow shimmer across the front. Each card has a silver border which helps accentuate the rainbow effect. The base cards are also appropriately orange and black - the Flyers' team colors. Naturally, the color scheme makes a whole lot of sense here. 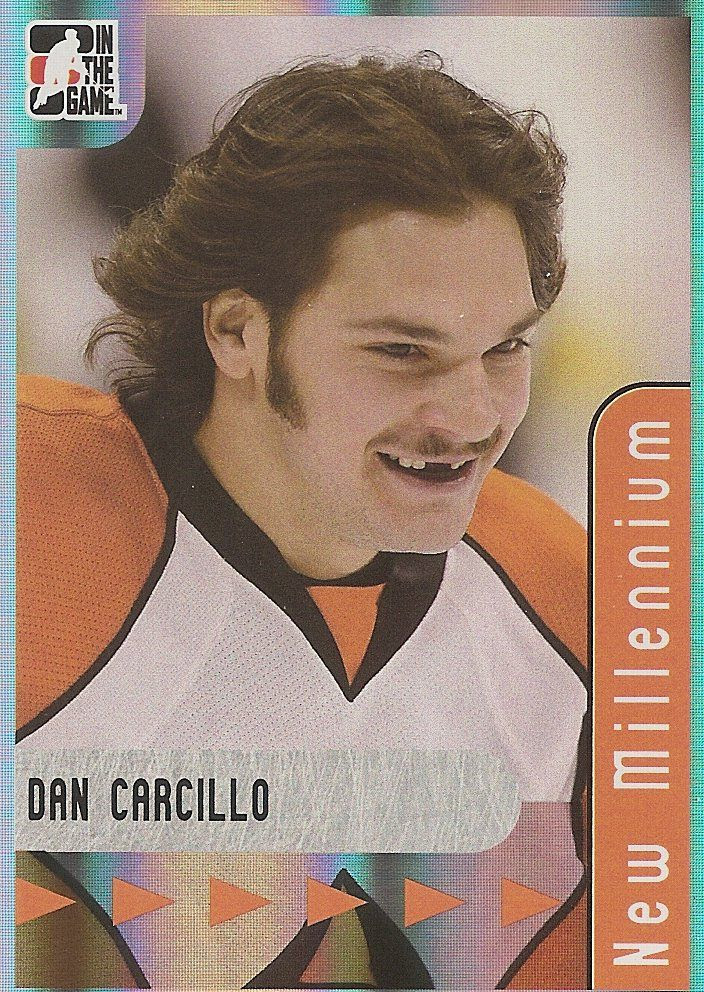 Though the quality of the physical card may have been raised, I feel that the design elements here have been taken a notch down. The fonts and design schemes used in the different subsets of base cards look dated and don't compliment the foil processing well. I get the sense that ITG tried to make the card design match the era that the player represented, but looking at the base cards gives me a sense of disjointed-ness.

I will also mention that the photo selection here is a bit lacking. Looking at all the cards together does not give me a sense of action... rather it is more like flipping through an old yearbook. 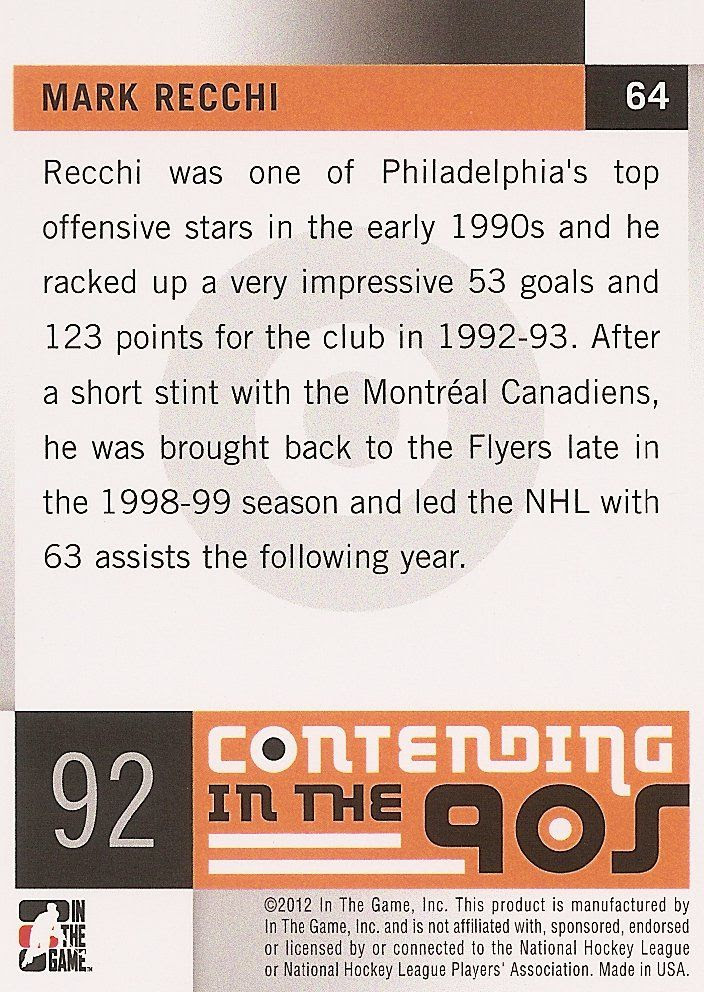 The backs of the cards are very typical ITG fare. These cards carry no stats, but rather focus on giving collector's more information on how the player contributed to the Flyers.

Inserts/Game-Used/Autos -
Each box of Broad Street Boys will contain 6 memorabilia or autographed cards. There are no non-hit inserts to be found in the set. I believe the division of the main base set did a nice job of creating an insert-type feel so non-hit inserts aren't really missed here. The box that I opened contained 2 memorabilia cards and 4 autos. 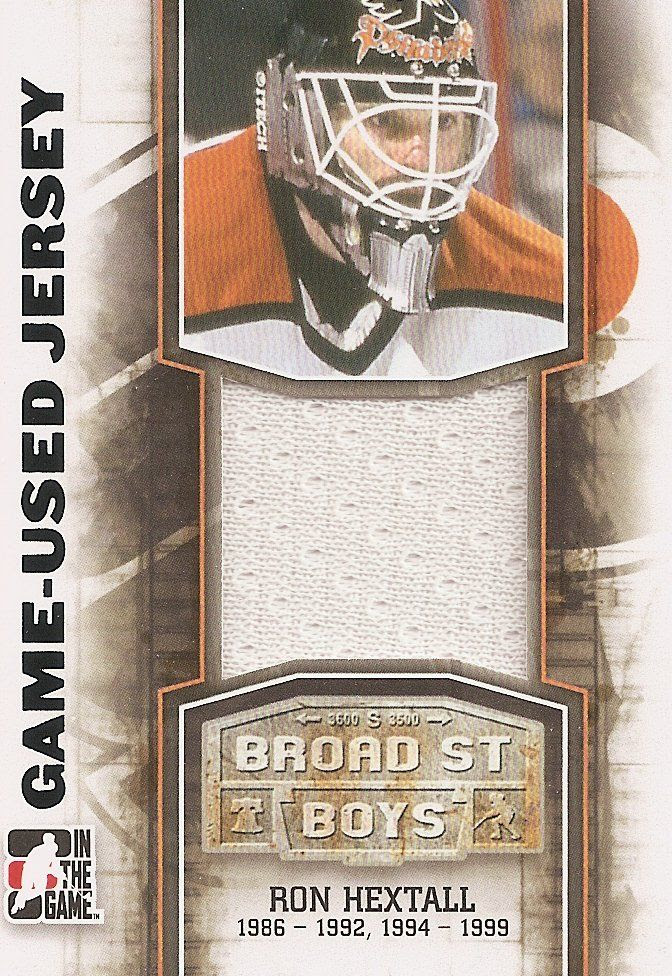 The most common type of memorabilia card is the standard Game-Used Jersey Black swatch card. These cards are vertically oriented, which I like because many of ITG's jersey cards are horizontal - so this is a little different. The cards carry a medium sized chunk of jersey and are limited to only 120 copies of each. The cards themselves are unnumbered, but the print-run information can be obtained from ITG's website. The Ron Hextall card shown above states on the back that the jersey piece was from a Flyers gamer. I certainly appreciate this knowledge. If I were a Flyers fan, it would give me joy to know the piece came off a Flyers jersey rather than a Nordique or Islanders one. In terms of the design, the card looks nice. The colors used are modern. Nothing to complain about here. 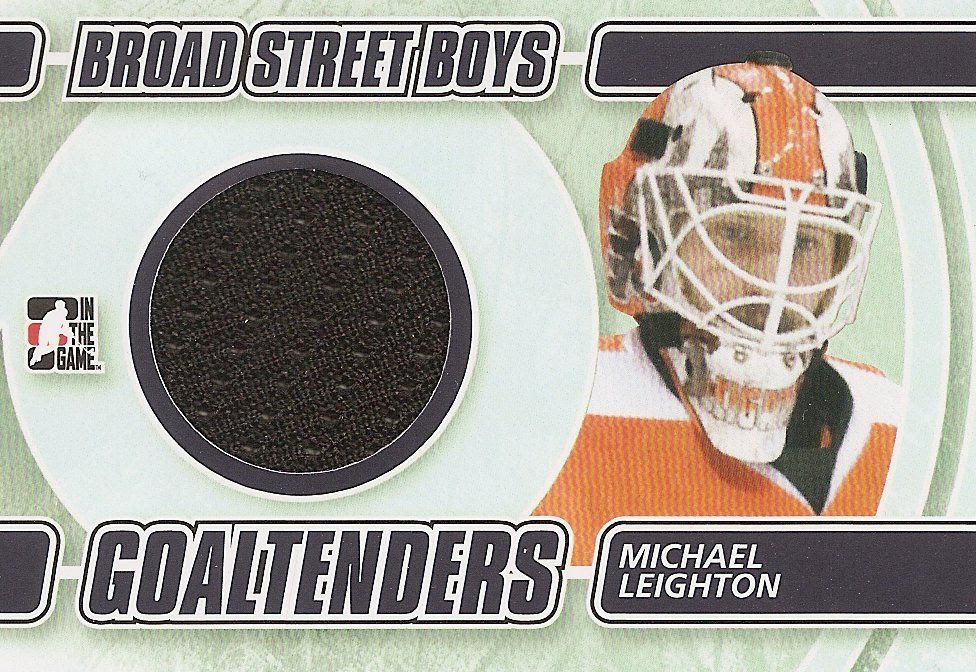 Goaltenders Jersey cards are limited to just 50 copies each. The design on these cards are more reminiscent of a typical ITG jersey card. Though the card seems rather plain, I do like the combination of colors on the card. The sea-foam green background works well with the orange and black. Again with this card, the swatch is guaranteed by ITG to be from a game-used Philadelphia Flyers jersey. 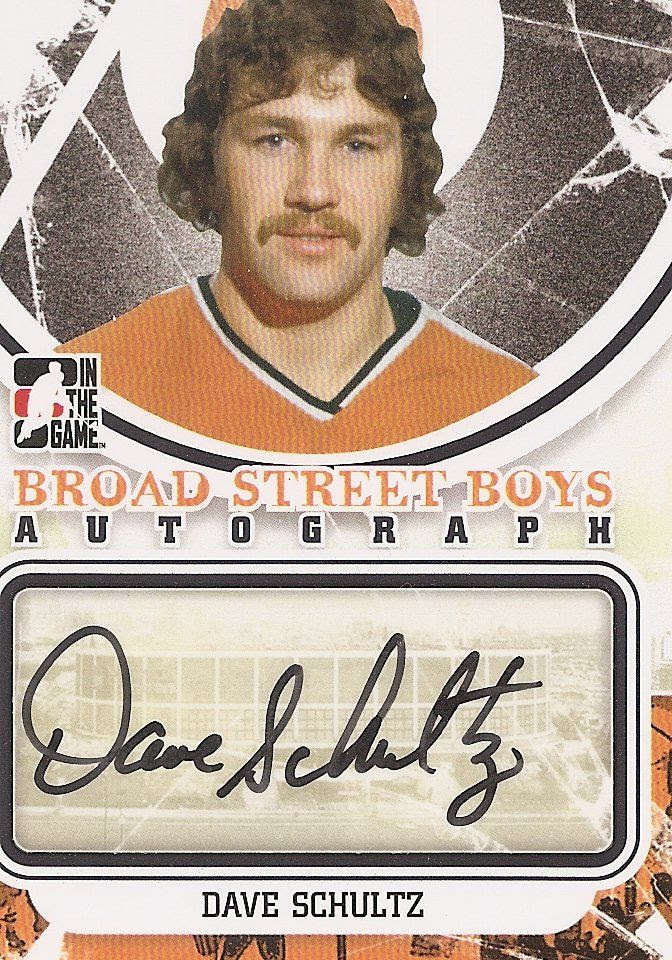 Here is an example of the standard autograph card in Broad Street Boys. As usual, ITG employs sticker autographs for these cards, but they blend in to the design so well that it is hard to tell they are even stickers. In terms of card design, these cards are pleasing. They utilize the Flyer colors well and have a busy-ness about them that prevents them from being boring. My only complaint would be that all boxes will have multiples of this type of autographed card so they could get tiresome. With a very deep checklist and star players being short-printed, the odds of getting a player you want may be slim when purchasing just one box.

Unfortunately, my box of Broad Street Boys was not too exciting, but I do know that there are awesome cards to be found within boxes of the product. You may find game-used stick pieces, patches off jerseys, and even entire letters off the back nameplate of a jersey!

Overall Rating -
Earlier in this review I asked if this product would appeal to me, a Sharks fan. With the box I opened the answer would be an unfortunate 'no'. I didn't get anything that would excite me to purchase more of this product. And even if I had pulled something crazy out, I would probably just sell it and recoup my box money. For collectors who are not Flyers fans, I can't see much to want to get out of a box of Broad Street Boys. Most of the autographs are of players most people would not follow and probably would not care to own (sounds harsh, but true!). The base cards are a bit lackluster, and standard jersey cards of those same players just wouldn't do it for me.

As a Flyers fan though, I would buy boxes and boxes of this stuff. Though the product has its flaws, being a loyal Flyers fan would compel me to purchase it. And I would probably REALLY enjoy seeing all the Flyers come out of the boxes. Eventually I know I would have to pull out some very rare and unique cards that I would love in my personal collection.

So for this review I am giving two overall scores - a first for The Cardboard Review!

Overall Rating for a Flyers Fan
9/10


Check out my box of ITG's Broad Street Boys: