Another 'blast from the past' product comes out to collectors today: 11/12 Panini Titanium! This mid-high-end product comes in a funny shaped box with only 5 packs. Each of the 5 packs will contain a jersey/patch, autograph, or combination of both along with 3 base cards. Let's open up a box and see if we get something solid... get it? SOLID... as in titanium?!?! Never mind... Base Card Design -
This being a higher tier product with the name Titanium, I was expecting a base card of a higher level than what I found inside my packs. The Titanium base cards are anything but titanium in nature. The cards come on medium glossy card stock and have a clean design that doesn't particularly stand out. The cards feature a large photo of the player on a primarily white/grey graphic. It is a little reminiscent of last year's All Goalies stand alone set, but with even less adornment. In that set, the base cards had silver foil highlighting to enhance that card. That is not found here at all. I would have expected at least the Titanium logo to be in some sort of foil. It isn't.

I really wish Panini would have give the base cards that touch of metallic texturing to match the name. As it stands, there is nothing really special about that base cards, and I don't think collectors would be too excited to collect them. 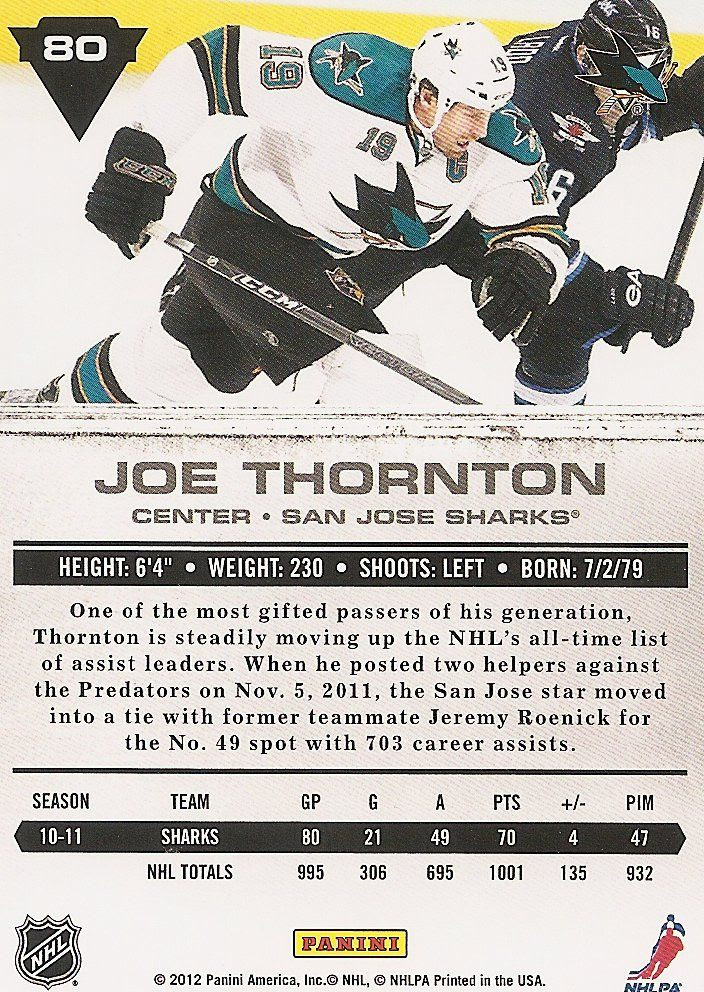 The back of the base card is more exciting than the front surprisingly. It features a different photo of the player in an action shot. The photo adds quite a bit of vibrance to the card and livens it up quite nicely. All the necessary vital stats are included along with a short write up of the player. As with many of the more premium cards, there is not a huge focus on on-ice stats - only the past season is covered in detail along with a career stat line.

The rookie cards in Titanium have a very unique nature to them that makes them interesting... but a real pain for people who might possibly want to collect a master set of it. In fact, these rookie cards are more than a pain. It is virtually impossible to complete the rookie card set. The rookie cards in Titanium are all serial numbered to the player's jersey. This is good in terms of this year's hottest rookie, Ryan Nugent-Hopkins, who has the number 93. But there are more than a few rookies numbered to less than 10. There is even Mikko Koskinen who is numbered to only ONE. Yep, so realistically, there is only 1 person in the entire world who could possibly own a master rookie card set of Titanium.

So I think I can safely say that Titanium is not a product for the set builder both in terms of card design and of course rookie scarcity.

Inserts/Game-Used/Autos -
As I stated before, each pack of Titanium will contain 1 hit - an autograph or memorabilia card. In this way it is almost like buying a box/pack of Upper Deck's SP Game-Used. Titanium is a very different product stylistically than SPGU though. In terms of the hits, there is a variety of different types of inserts to be found, and each carry unique and varied designs. 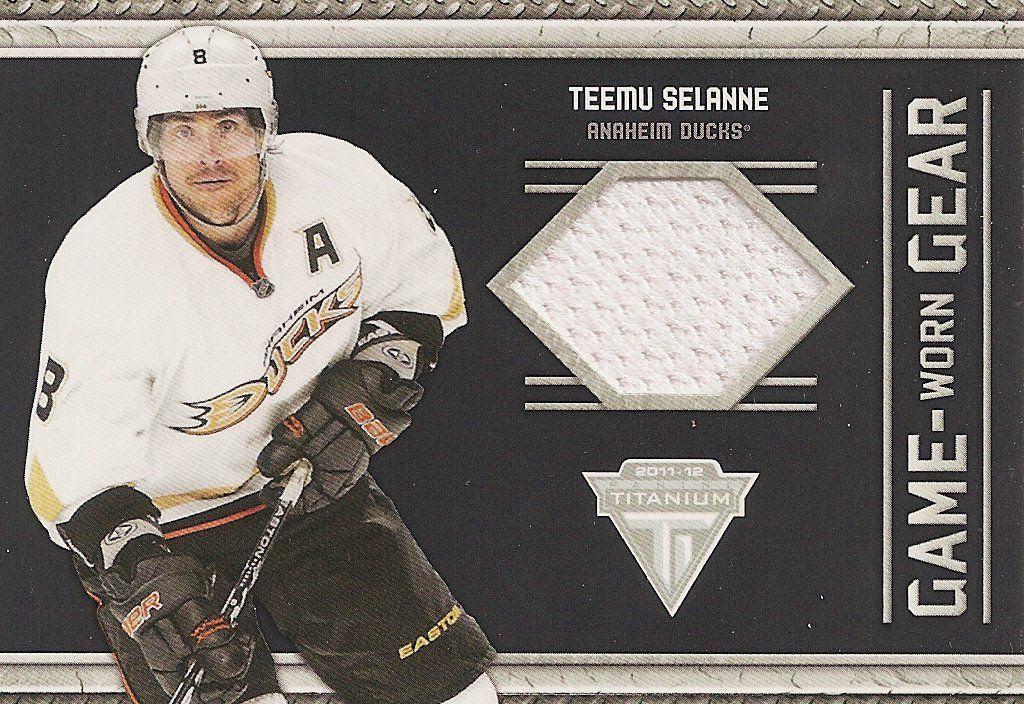 The most common hit you will get in Titanium is the standard jersey card called Game-Worn Gear. If purchasing this product by the pack, this is the card you will most likely stumble upon. As a standard jersey card this has been done many, many times over. The piece of jersey found on the card is relatively small, but comes in a unique geometric shape. The border of the card has the image of metal plating, but is not metallic. As with the base cards, a little foil on this card would have gone a long way in terms of visual appeal. The grey and black color scheme of the card is solid, but these cards do not stand out in any way, shape, or form. 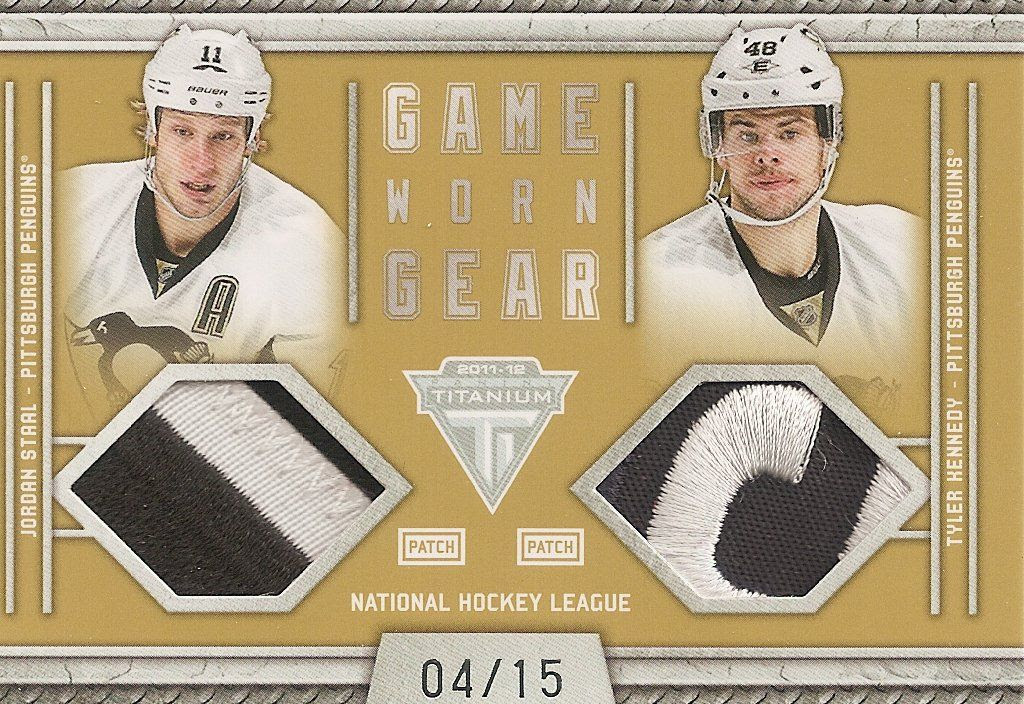 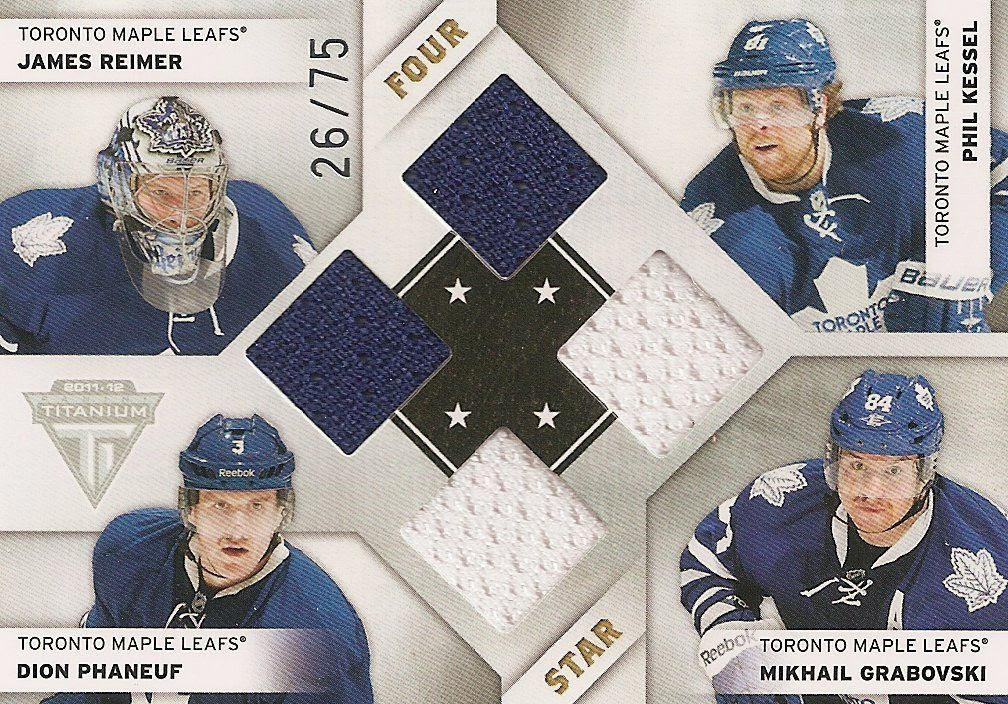 Fans of certain teams have the pleasure of pulling the Four Star cards out of Titanium. This good-looking card features four players from the same team along with jersey pieces from each player. This card of the Leafs is limited to just 75 copies. As with the Game-Worn Gear cards, there are different higher tiered variations of these cards that will contain patches or prime jerseys. And again... wouldn't it be awesome to get the entire rainbow for your favorite team? 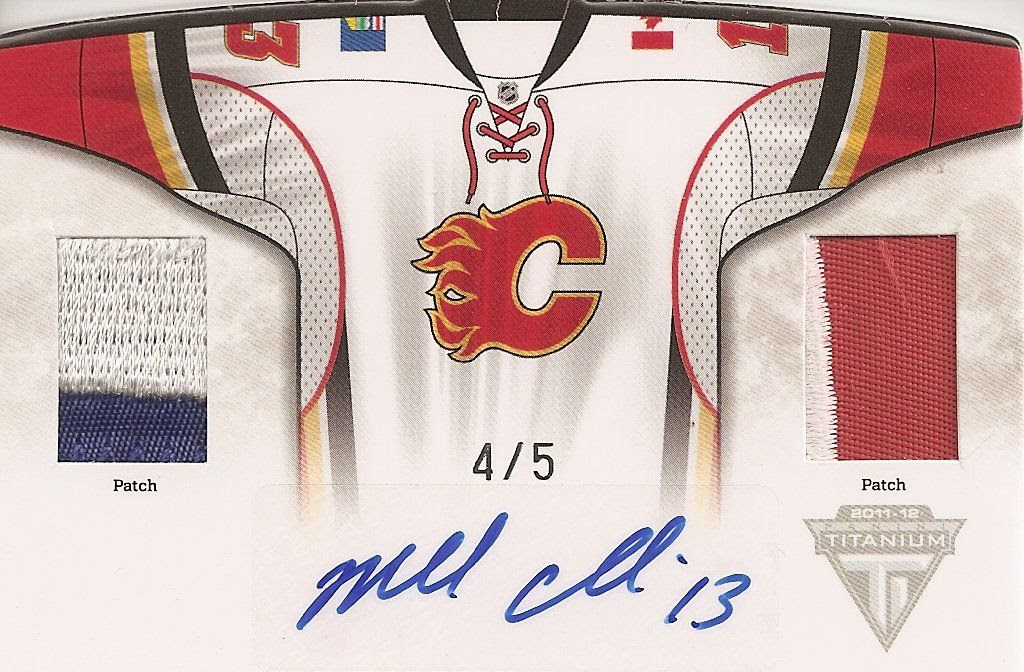 Above is a card that I think will get very mixed reactions from collectors. This is an example of a Sweater card. I was pretty happy with this rare dual patch and autographed card, but I'm not so sure about the design of the card. I personally am not a fan of cards that don't feature a photo image of a player on card. These types of cards are somehow lacking for me. ITG is a company that had been forced to do that on occasion, but I couldn't see how any company with a license would purposefully choose not to use player images. Well, here's a card that doesn't. Do you think that the memorabilia and autograph are enough? Or are you like me and need to have that photo on there? Let me know!

In terms of autographs and memorabilia cards, there are more to be found in Titanium. Private Signings are back and have a few notable names such as Gabriel Landeskog, Eric Lindros, and Carey Price. There are also New Wave autographed cards as well as many other memorabilia cards to be found within the product. I am impressed by the amount of content Panini has been able to cram in here. 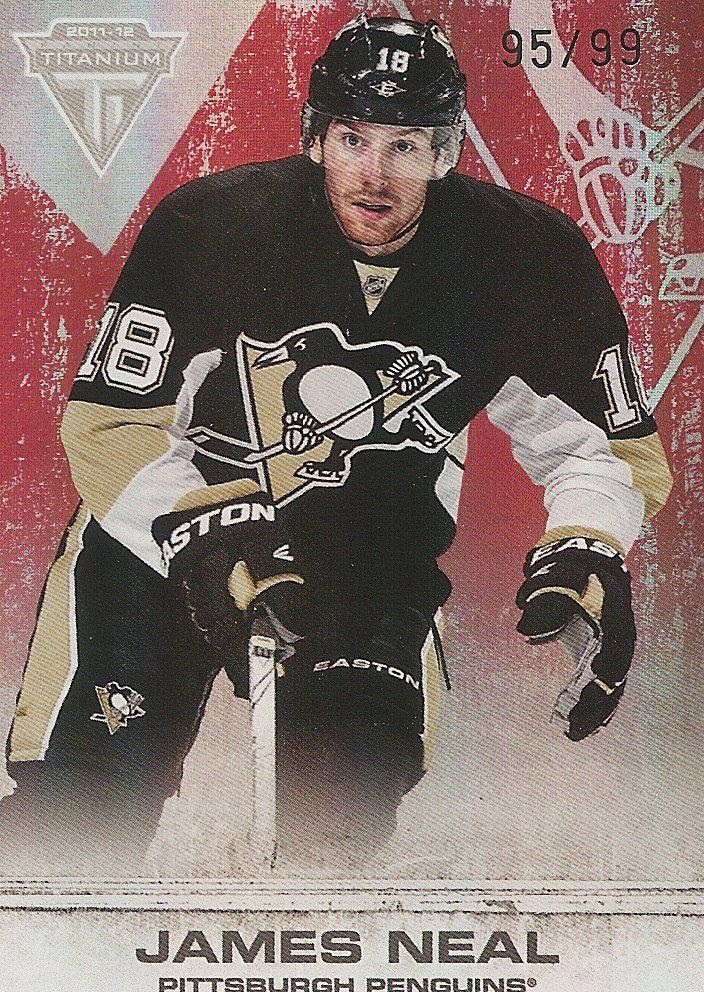 Besides autographs and memorabilia cards, Titanium has two parallels to the main set of cards. There are the Spectrum Ruby cards that have a red foil board backing and are numbered to 99, as well as a gold Spectrum version numbered to only 10. These parallel versions are nice, but again, with a name like Titanium, I would have liked something more metallic in nature. Actually, the look of these cards would have been nice if they had been the standard base card.

Overall Rating -
For about $100 a box for 5 hits, I would say Titanium is worth it. As with all hockey card products, there will definitely be boxes not worth the money spent on it, but Titanium has quite a bit to offer to collectors. There are just so many fun possibilities to find in boxes of it!

The closest comparison I can make with Titanium is Upper Deck's SP Game-Used. In SPGU, collectors are spending around $180 per box for 6 packs. Here you get 5 packs for $100. In both products you get one hit per pack. I would say in terms of overall value, Titanium takes it hands down. SP Game-Used may have more monsterous hits, but for collectors who purchase only a few boxes, Titanium is the safer bet.

I would definitely recommend purchasing Titanium. It has a price point that works well for collectors who can afford to buy cards by the box. Though the base cards totally underwhelmed me, this product really isn't about the base cards anyways. It's about only one of those cards you get in that pack. And I'm pretty sure you know which card I'm talking about. Hint - it's the one that doesn't look like the rest.

Check out my box of 11/12 Panini Titanium that I bought from D&P Sports Cards: