Here comes something very interesting out of the Panini camp - Rookie Anthology! After a very successful and collector approved product in Titanium, could Panini come up with another winner so soon? We'll find out as we delve into a box of Rookie Anthology and see what kind of cards come out... and yes, there will be quite a selection of different cards to be found within this unique product. 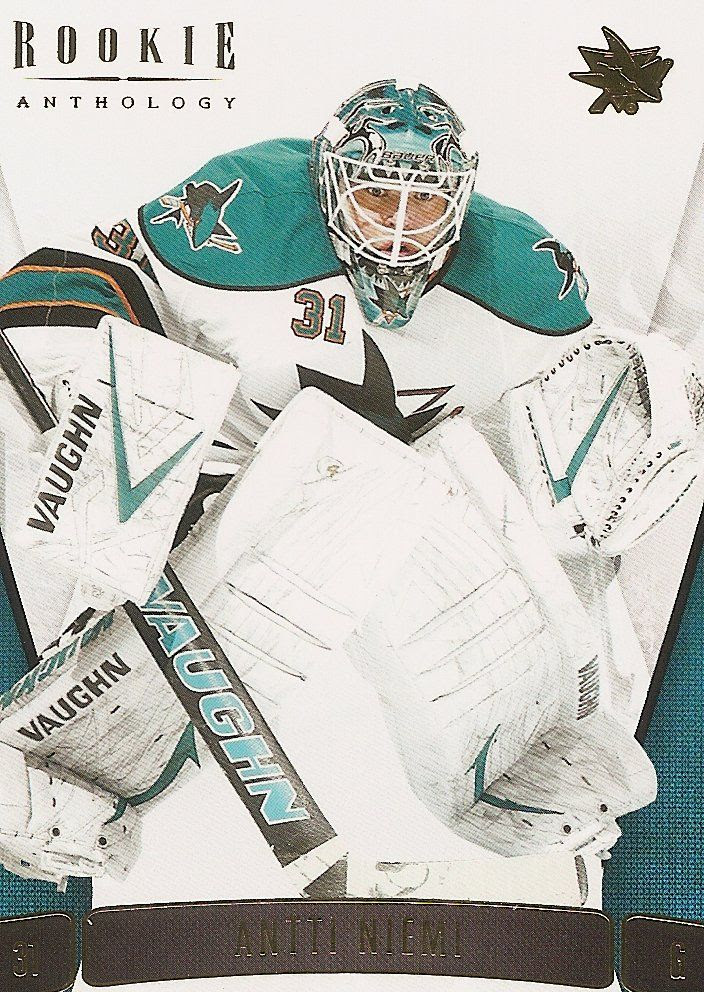 Base Card Design -
Has Panini been reading my card reviews? Well, it sure seems like it! The Rookie Anthology base cards are great looking for many of the reasons I have stated before. These base cards are clean, crisp, and modern. The first thing I'd like to mention is the perfect use of foil on these cards. The product logo, team logo, player name, jersey number, and position are all highlighted with gold foil. The use of foil is restrained and not over the top. It does a brilliant job of imparting a premium feel to the card. I also love the white background and team color scheme on the front. The cards have an overall brightness to them that help them really stand out. Job very well done here Panini! 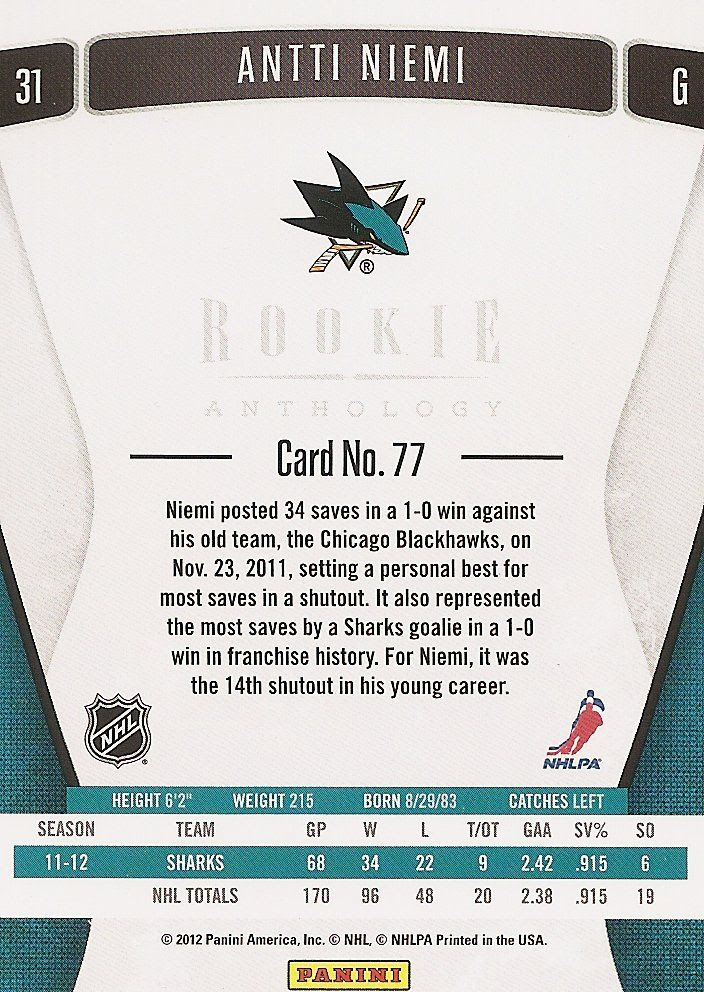 The back of the base card is pretty sparse compared to the front. Whereas the front is full of eye-catching design elements, the back is somewhat lacking - there just seems to be a lot of dead space on it. I also am not a fan of the card number placement. As you can see, the card number is placed in the dead center of the card. This would make a bit harder for set collectors to sort and put together in my opinion. In terms of design, it's unique... in terms of functionality... not so much.

For a product called Rookie Anthology, you'd think the entire focus of the set would be on rookies. Well, aside from the base cards, pretty much the rest of the set is rookie focused whether it be this year's rookie crop or highlighting veteran players' rookie seasons. 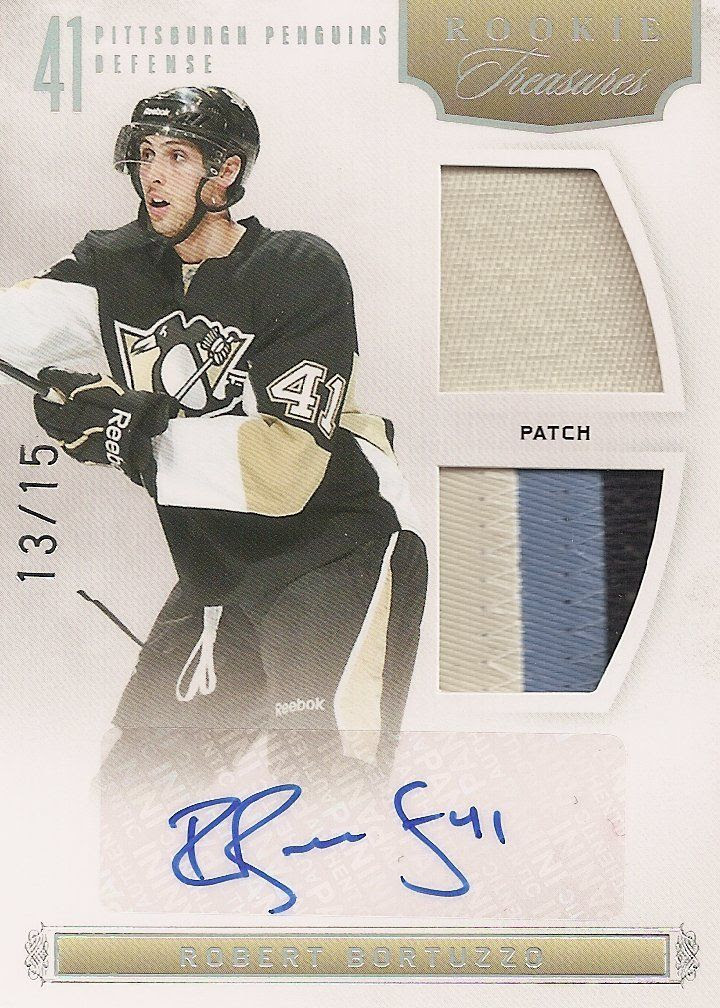 The standard rookie card in Rookie Anthology are the Rookie Treasures cards. The design on these cards (especially the logo) harken to the National Treasures or Timeless Treasure lines in Panini's other sports offerings. Though the Robert Bortuzzo card above is a short printed patch variation of the Rookie Treasures, you can see the basic design scheme of the card. There are two pieces of player-worn material along with an autograph. There are three levels of rarity when it comes to these cards. The top tiered rookies are limited to 99 copies, the next tier is to 199, and the last tier is to 499. All the patch variations are limited to just 15. In terms of look, these cards are very classy. Everything about this card is elegant and worthy of being a super premium card.

Inserts/Game-Used/Autos -
Rookie Anthology is unique in that it 'updates' sets that Panini has already released. You will find rookie cards from Limited, Certified, Pinnacle, Contenders, and Crown Royale in this set. For the set completers out there, if you thought you were done with your Panini set from earlier this year... think again! There are now more cards to chase and add to your set. Panini has included Luxury Suite cards within boxes of Rookie Anthology too. Though they did not release Luxury Suite as a stand alone set, it's neat to see it a part of this mash-up of products. 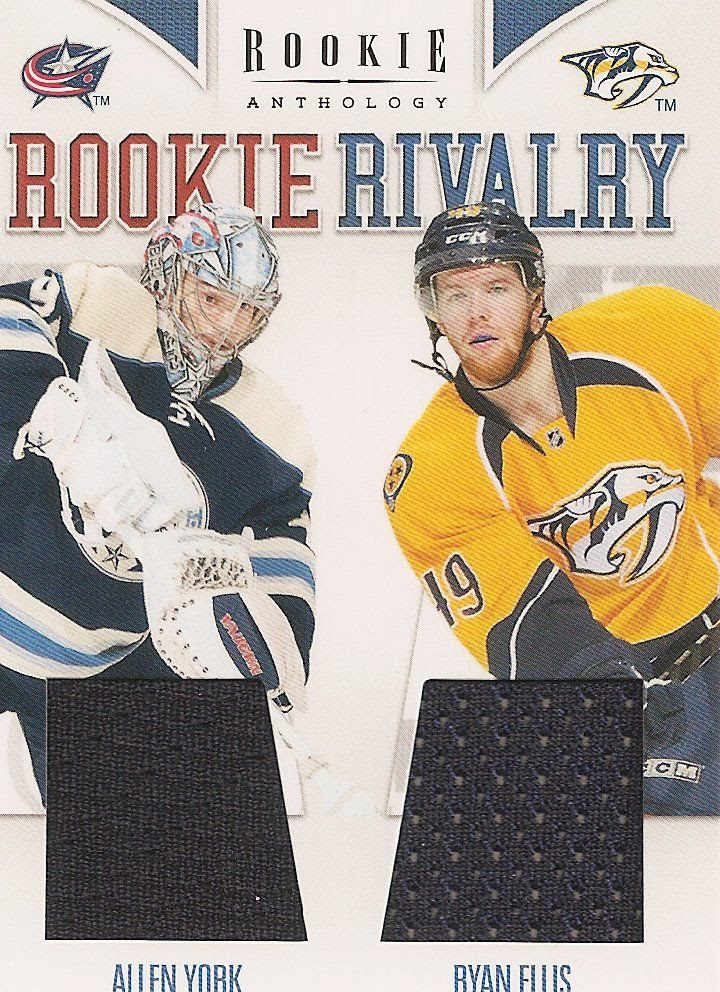 Aside from the rookie update inserts, Rookie Anthology has it's own branded sets of inserts. The Rookie Rivalry player-worn dual jersey cards is an example of this. Here Panini features two players who may have a rivalry with each other. Reading the back of this card doesn't really make it apparent why these two particular players would have a rivalry though. I think these cards are just an excuse to get a couple of jerseys on a card and feature some of the rookies. Maybe one day there will be an actual rivalry between these two guys! Who knows?!? In terms of card design, the card is nice, but nothing special. Though a limited short printed patch variation of the card would potentially be pretty cool... there isn't one in this case. These cards only come in jersey form. 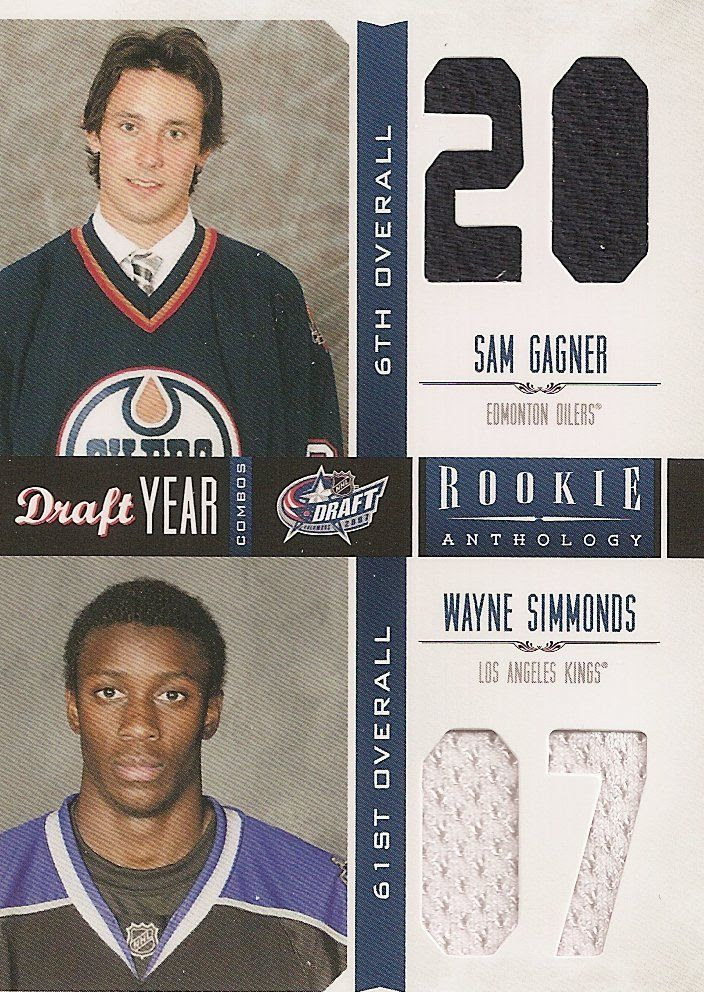 A more veteran focused jersey insert is the Draft Year Combos set. In this jersey set, two players from the same draft year are put together on the same card. Each card features game-worn material from each of the two players. I personally prefer this to the Rookie Rivalry set. It's always nice to see players from the year that they were drafted - many of them have grown-up and changed so much in such a short period of time. As for card design, the top/bottom look works well here. I like how the draft position is clearly labeled on the front of the card. Having the draft year die-cut for the jerseys was also an appropriate design choice.

Aside from these two inserts, collectors will also find the popular Private Signings autographed cards, Pinnacle Starting Six jersey cards, and even bonus autographs in boxes of Rookie Anthology.

Overall Rating -
Panini's Rookie Anthology is a really fun break. I was skeptical about Titanium and I was skeptical about Anthology, but Panini really surprised me in a good way with both products. With Anthology, you get one insert/hit per pack along with a bonus pack per box. There definitely seems to be value to be had here. The base cards are nice and this product will be a must for collectors who want to finish off their Panini sets.

At a price of about $100 per box, I think it's about right. The only drawback of this product is the extreme focus on rookies in a year when there just isn't a large crop of top tier guys to collect. But that being said, there are still some amazing cards of Ryan Nugent-Hopkins, Gabriel Landeskog, and the rest to be found. I bet any collector would be happy with a Rookie Treasures or Luxury Suite card of them!