Finally, more and more hockey card products are being released! All three of the main hockey card manufacturers have released products within the last couple weeks. Upper Deck released it's much delayed, but much anticipated SPx brand this week. SPx has been a popular product for many years that has offered a mix of game-used and autographed cards. This year seems to continue along those same lines. 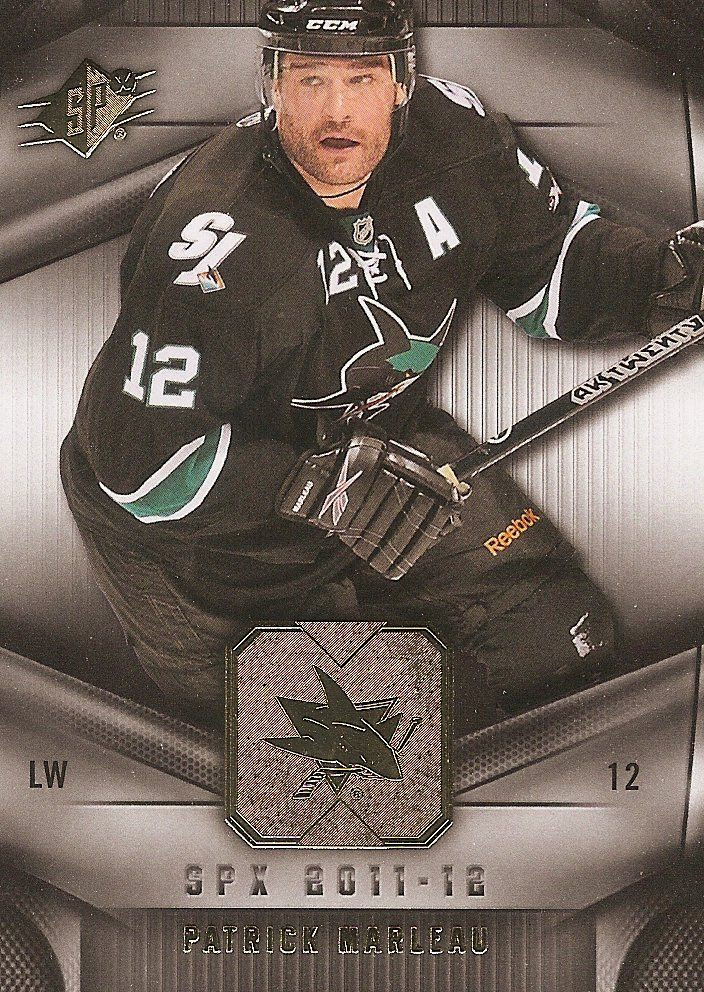 Base Card Design -
This year's SPx base design sports a deep grey color scheme. The look invokes a very industrial, dark feeling. The cards seem serious to me... not cool, not elegant, but... serious. Each card has the same background image for the player to sit on top of. The background image is composed of different geometric lines and shapes that result in a border that frames the player's photograph. Gold foil highlights a few key aspects of the card to give it a little shine. All-in-all, this year's design sits right there in the middle for me. I don't find myself liking or hating the design. But I don't see myself wanting to go after a base set of these cards - so perhaps I am leaning a little more towards a dislike of the design.

What does push me over negatively in terms of the base cards is the cropping of every single base card I have seen. Looking at the Patrick Marleau card above, you will notice that part of the helmet is cut off at the top. In fact, every base card I have seen has this same cropping. All the tops of the NHLers heads are cropped off the card. I spoke with the owner of D&P Sportscards in Sacramento and he told me that he didn't like the way the photos looked. I tend to agree with him. Looking at the card as a whole, there is plenty of space at the bottom to 'lower the card'. I wonder if this was a specific design choice. If it is, I have to say it's not one I agree with at all. I am curious to what others thing of this. Is this a deal breaker for you in terms of how the cards look? 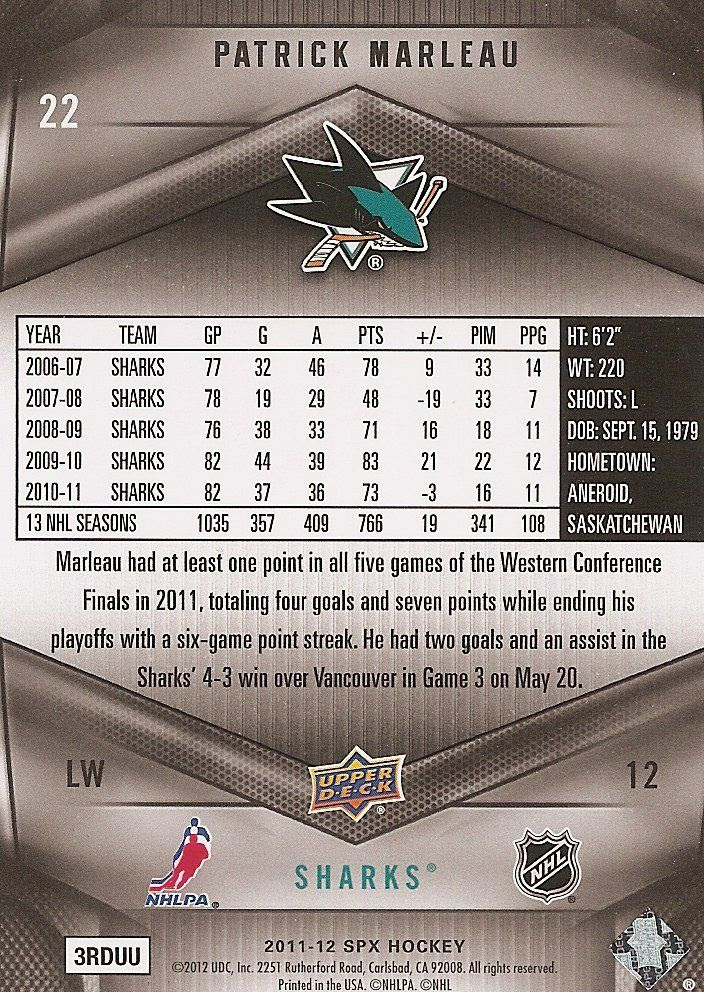 The back of the base card follows the front. You can clearly see the same design elements. The stats of the player are featured in the middle where the geometric lines open up to frame them. There is no player photo on the back, but for this design, it is appropriate. The backs are very utilitarian, which echos the industrial feel of the entire set. 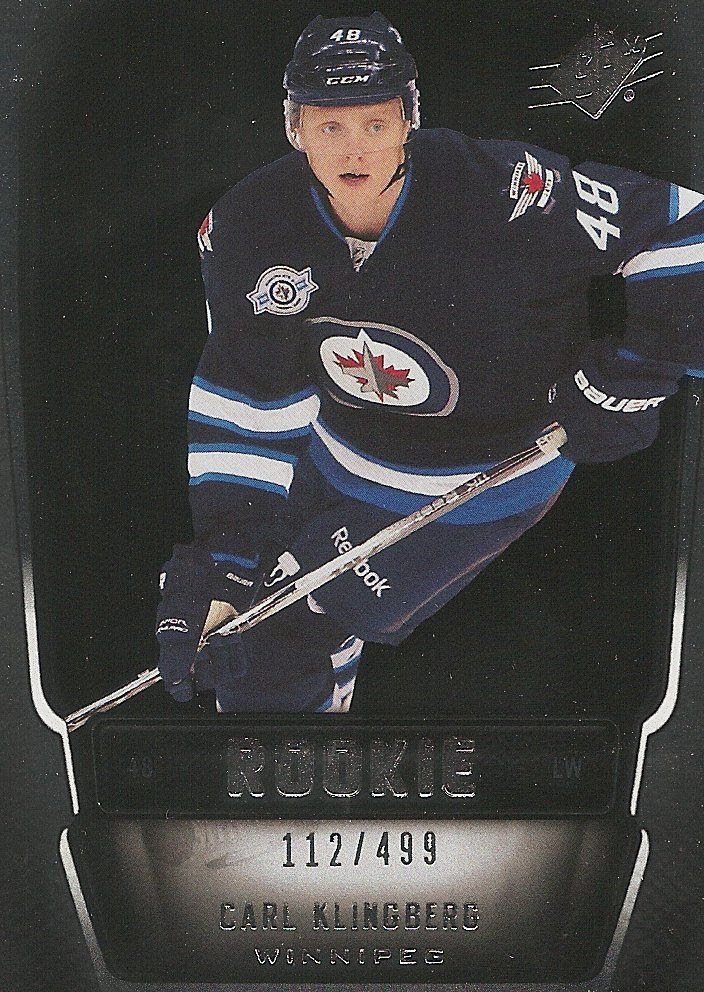 The standard non-memorabilia rookie cards come in an all-foil form. Each of these cards are serial numbered. Though the base cards looked dark, these look even darker - especially if the player on the front is wearing a dark jersey. Here we have Carl Klingberg of the Jets. His dark blue jersey is hidden in the black background of the card. The edges of the card are silver foil, but they have more of a grey/steel look to them. It's a foreboding design which relates to the base cards. As before, the card is not bad looking, but there is nothing that makes me really enjoy it. 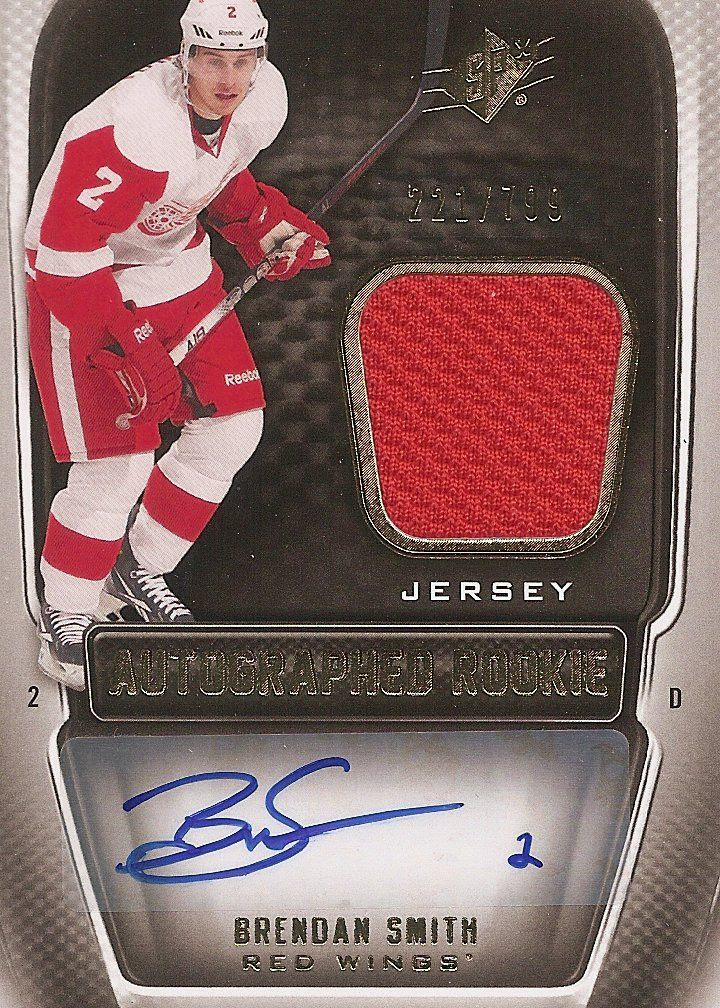 The best looking cards of the main set are the rookie autograph and jersey cards. These cards combine elements of both the foil rookie cards along with the base cards to create a strong looking card. These rookie cards show an image of the player that doesn't have the top of his head cropped off. It keeps the rookie card border but eliminates the foiling on it. By doing this the card is much brighter and it helps everything on the card pop off a bit more. The jersey on the card further helps the card, especially if it is a bright color. The only downside of these cards are the sticker autographs, but this has been the SPx norm for years. Though, with such a delay in these cards, it would have been nice to get some on-card autos... but then again... that wouldn't be normal for SPx, right? 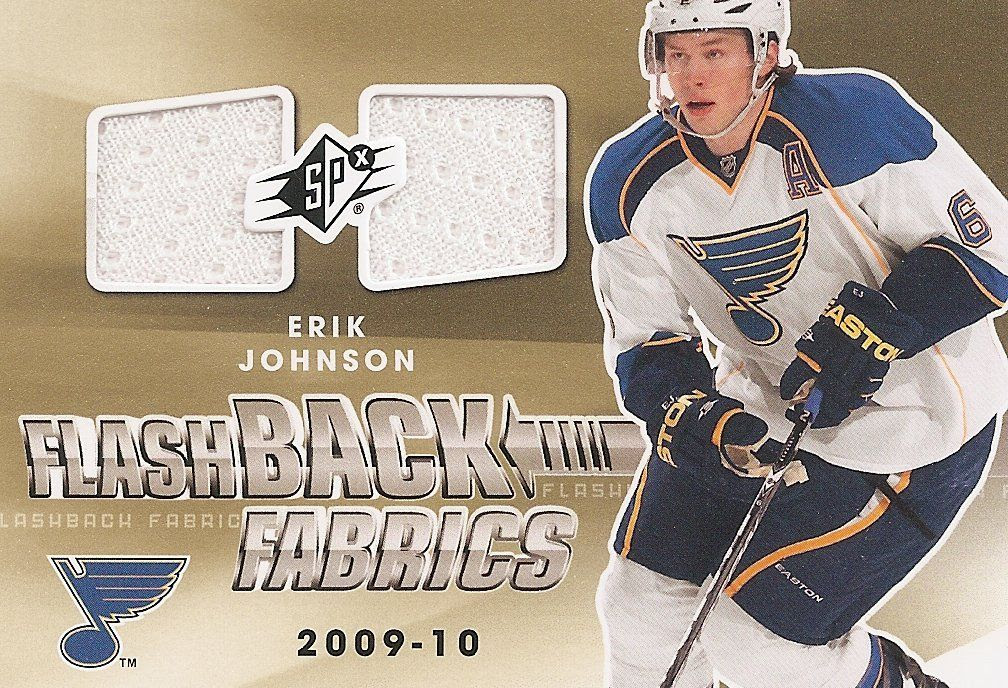 Flashback Fabrics finish off the main SPx set. This subset has always seemed a bit of an oddity for me as they feel more like an insert card - their look is so different. Most companies (and even UD in their other product lines) would have made them a separate entity, but they do have main set numbering. The Flashback Fabrics this year come in a gold background. The design lacks a bit for me compared to the way they were done in past renditions. To me the best Flashback Fabric designs are the ones that are over-the-top colorful and retro. This design is rather plain. I do, however, love the nod to the Back to the Future movies. I've got to give it to them there!

Inserts/Game-Used/Autos -
The insert cards found in SPx have a similar feel to them as Upper Deck simply updates many of the same insert lines from previous years. Making a return are the hard to find Shadowbox insert cards as well as base parallel cards feature game-used materials. 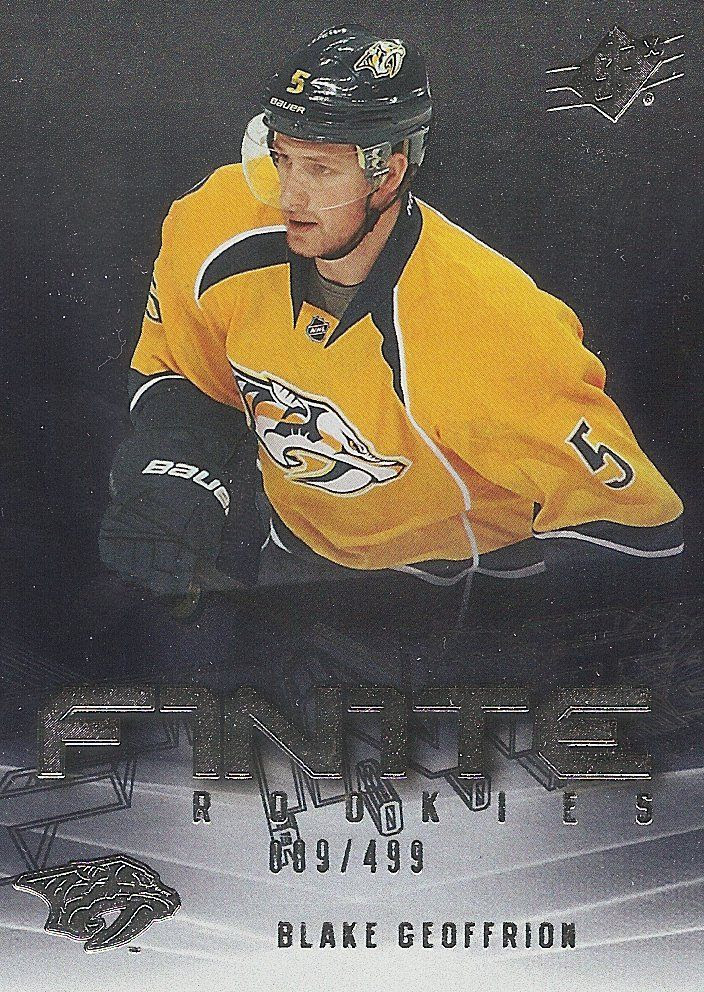 The Finite rookie card inserts are back and look great. The Finite cards always have been well-designed. They definitely give the rookie cards in the base set a run for their money. These cards are all foil board and use multiple foiling techniques to create a well-textured and exciting piece of cardboard. The best part of these cards are the cool fonts used. They are very futuristic and remind me of what SPx did best - which was to create cards that had a future feel to them. 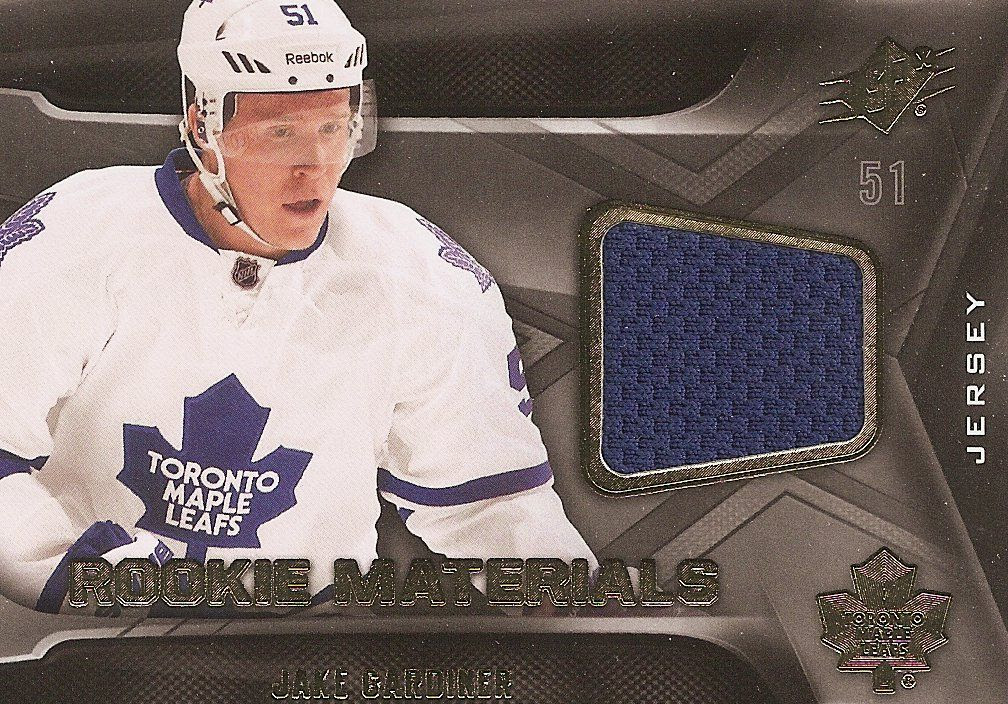 Rookie Materials are the standard photoshoot jersey cards found in many current products. These cards are nicer than ones found in other products though. I appreciate the large image of the rookie and the size of the jersey swatch is appropriate for a product of this price point. The use of foil on this card gives it a bit more class as well. Simple things like that really help a card along. Notice the gold foil box bordering the jersey swatch. Nicely done! These standard jersey cards do not have numbering. And one curious thing about these cards is that the front is horizontally oriented while the back is vertically oriented. That's a bit disorienting! 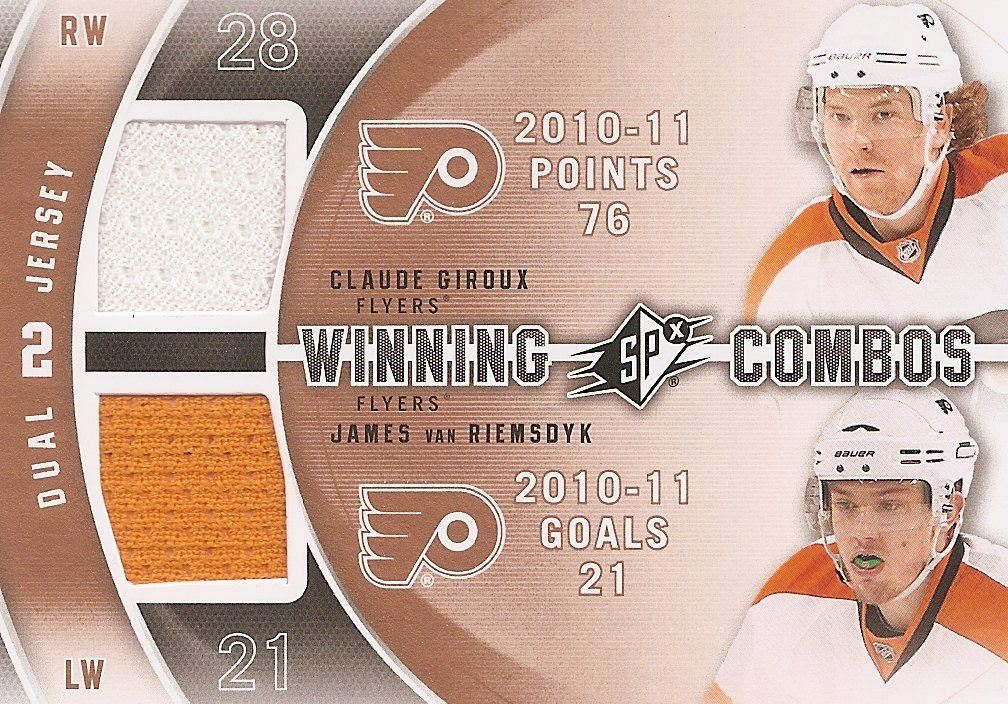 Winning Combo and Winning Material cards are the typical star player jersey cards found here. These cards are very reminiscent of the cards of the same name in last year's product. These cards are a bit lighter in color though... which I find odd since everything else about this has gotten darker. These cards don't fit in as well with the base set and other inserts. I would have liked to see more continuity throughout the entire product line. These cards are not terribly exciting to pull as jersey cards have completely flooded the trading card world. It might be time to re-think cards of this ilk.

Though my box contained only jersey swatches, there are patch pieces to be found in SPx this year. Many of the patch cards will feature very low numbering and should be very collectible pieces. Cards with both a patch and an autograph can also be found and they will be even more sought out and valuable.

Overall Rating -
SPx has always been sort of a middle child in the Upper Deck SP line-up of cards. It's not the widely popular-to-all SP Authentic nor is it like its big hits brother, SP Game-Used. It falls in the middle with cards that could be popular to collectors if released at the correct time. Upper Deck usually releases SPx earlier, but by releasing it this late, I believe it leaves collectors wanting more than what it has to offer.

By now collectors are wanting on-card autographs of the rookies from the season.  Collectors also have the desire to get more patch pieces of the rookies. Many collectors are moving away from non-memorabilia type inserts to chase higher-end game-used cards. Not to say non-game-used inserts are bad, but those types of inserts work better as a warm-up to the really big hits to come as the hockey card season steam rolls to the end.

SPx offers very nice inserts (see Shadowbox cards) and standard sticker jersey rookie cards. But at this time in the year, there needs to be more... and collectors are used to having more by now.

At around $120-130 a box, SPx is a bit pricier than other products out there. It will yield some solid hits, but there are bigger products coming soon on the horizon. My recommendation would be to try a box or two to tide you over before SP Authentic releases.


Check out my box break of SPx at D&P Sportscards in Sacramento, CA: