So much thanks goes out to Panini for including a box of their new 11/12 Past & Present Basketball for me to review in the package they sent to me. It was certainly a really awesome surprise! Growing up in the 80's, basketball was my favorite sport BY FAR. I lived in Portland, Oregon where the only thing going in sports were the Trail Blazers. I had all the Blazer gear back then, and had a PC of Clyde 'The Glide' Drexler, Terry Porter, and others. When coming back to sports cards a couple years back, basketball cards were a serious consideration for me to begin collecting again... well, obviously hockey won out (and I don't regret it at all), but getting the opportunity to check out a current basketball product is sooo awesome. Here's a rip into a sweet b-ball box of cards. Join me! 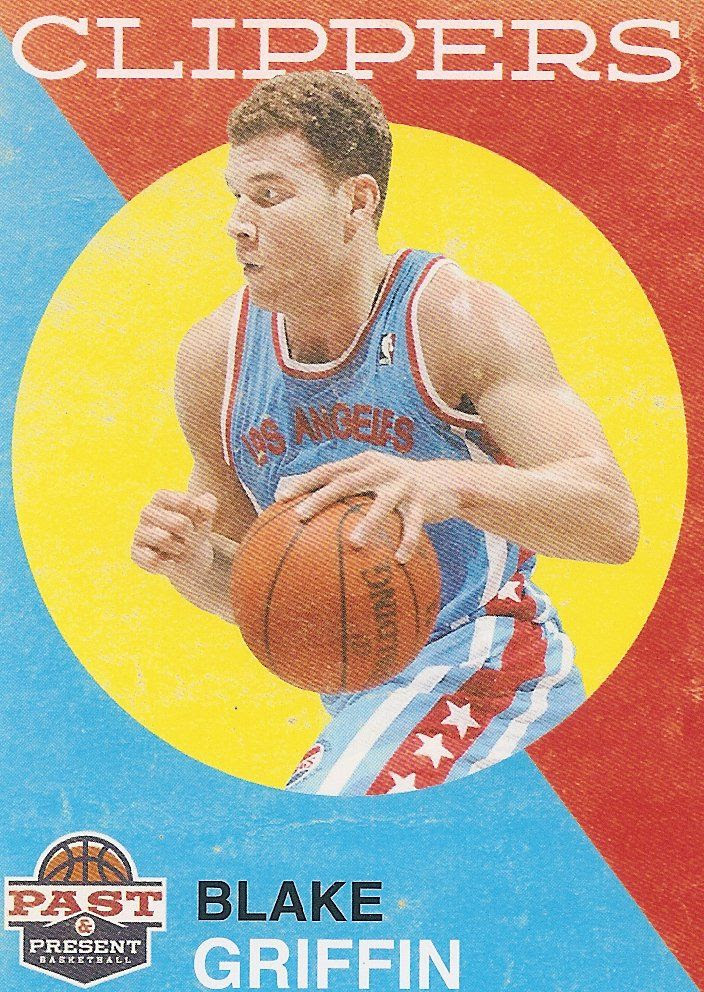 Base Card Design -
The base cards of 11/12 Past & Present lie squarely in the past in terms of their design. There are a few different variations of the base card, but they all have an old school look about them. Each of the base cards feature bold, bright, yet slightly faded colors. The design is very reminiscent of a product that could have come out in the 70's. This nostalgic looks is perfect for collectors like me who remember basketball from decades past. The base set is a mix of current and past players. Though there are players from many of basketball's eras, the set does not look or feel disjointed. The design scheme really brings it all together in a surprising way.

In terms of feel, though the cards look to be on an older cardboard type stock... it isn't. The cards are thin, but sturdy and have a slickness to them that almost feels like plastic. The card stock really works well on these cards. They look like cards from the past, but have a modern construction - great for a set called Past & Present. 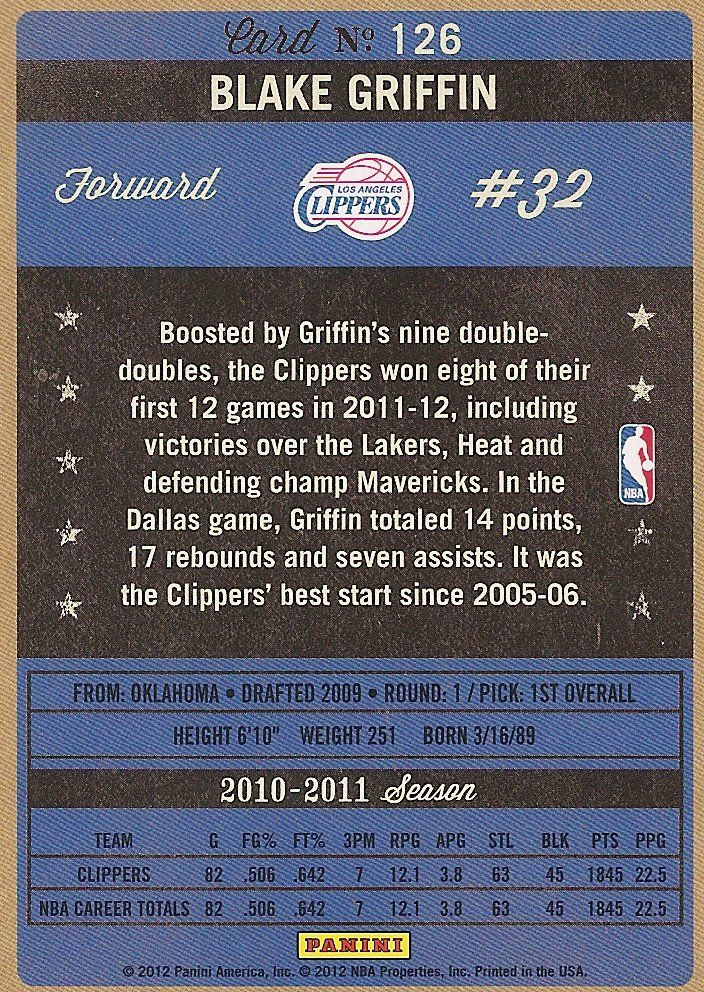 The backs of the base cards feature bold sections of information. The design is again clean and retro. Everything is laid out nicely, but I can't help but feel it to be a bit generic. I'm not sure what it is - the fonts used or the graphics... but there is something about these cards that look like it could have come from the 'home' section of a Target store or at IKEA.

That aside, the base cards are well done and fun to look at and read. They alone would make me want to purchase a few packs for the fun of it.

Inserts/Game-Used/Autos -
The box states that collectors will receive three autographed cards and one memorabilia card per box. For a mid-range product, this feels to be a fair amount of hits for the buck. Aside from game-used and autos, there are some really sweet looking insert cards as well. 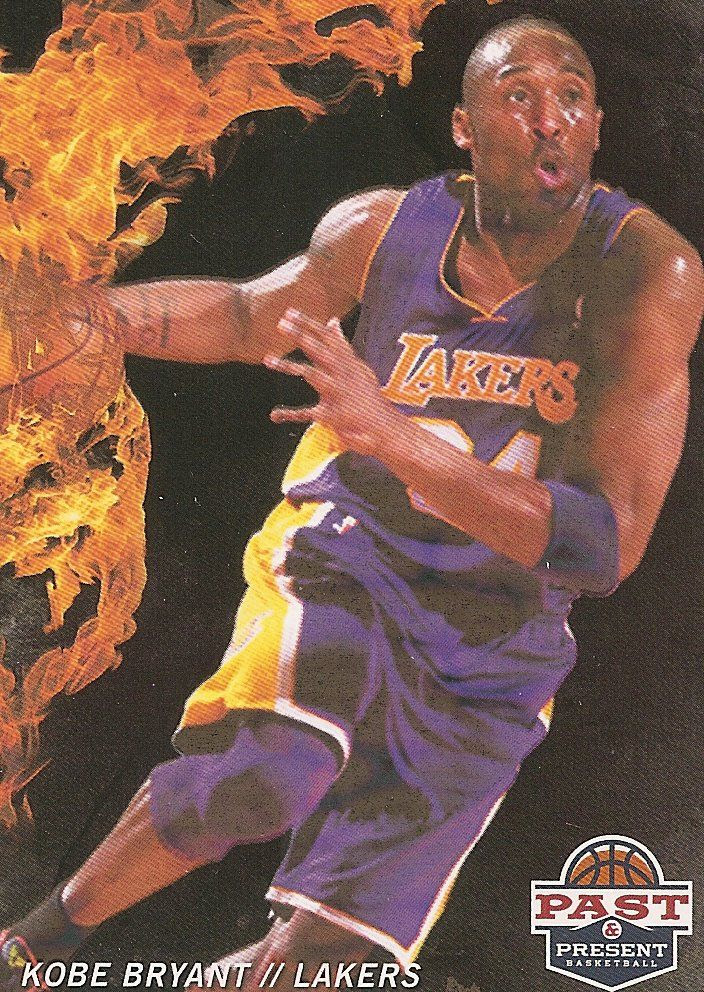 In the 90's, inserts were all the rage... and basketball inserts were the best out of all the sports. There were great looking inserts of the 90's that are still extremely popular to collect today - just search eBay listings for hard-to-find Jordan inserts and you'll see what I mean. The inserts back then were colorful and eye-popping in terms of design. Sadly, inserts of the our era have been lack luster - especially in hockey, the sport I mainly cover. Well, Panini has re-upped inserts here in Past & Present. One of the most stunning cards in the product are the Fireworks insert cards. They really have to be seen to be appreciated. The featured player is on a black background with flames. The picture of the player and the flames have a special foil that shimmers in a fantastic way in the light. Check my video at the end of this review to get a look. This insert set is outstanding - we definitely need more cards like this... especially in hockey! 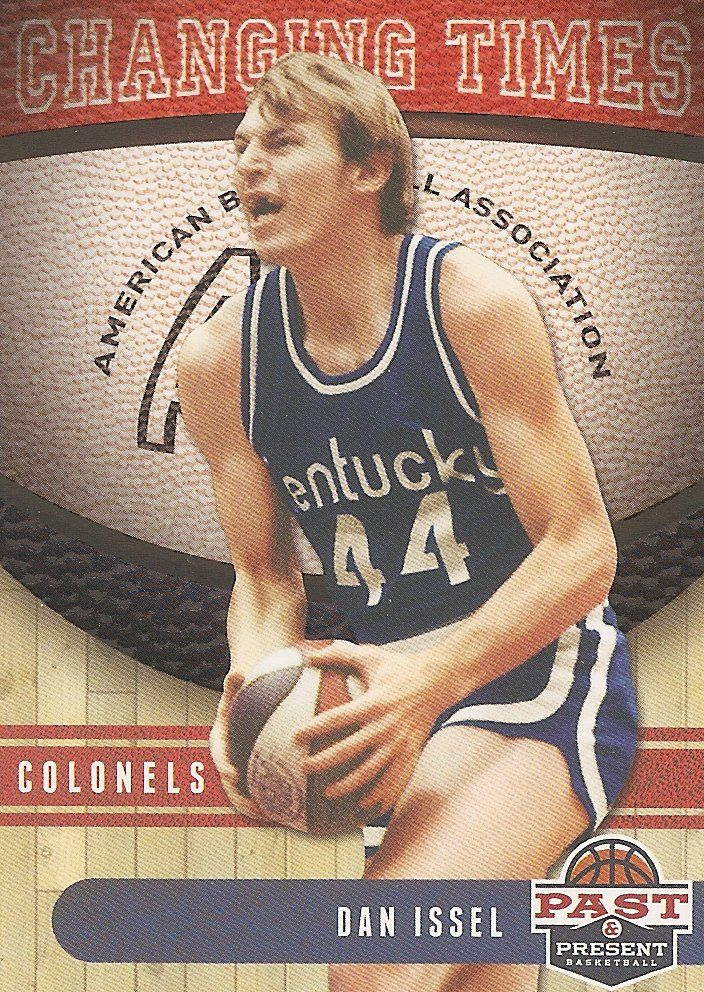 The Changing Times insert set is another insert that stood out to me. These cards feature players from different eras. In the background there is a large textured basketball that signifies what era the player was from. This Dan Issel card features the ABA's red, white, and blue basketball. Other players will have a basketball that represents the time that they played in. The fact that Panini decided to tweak the design of the cards within the insert set rather than just keep them all the same is awesome. To me Panini totally wins here in the attention to details department. 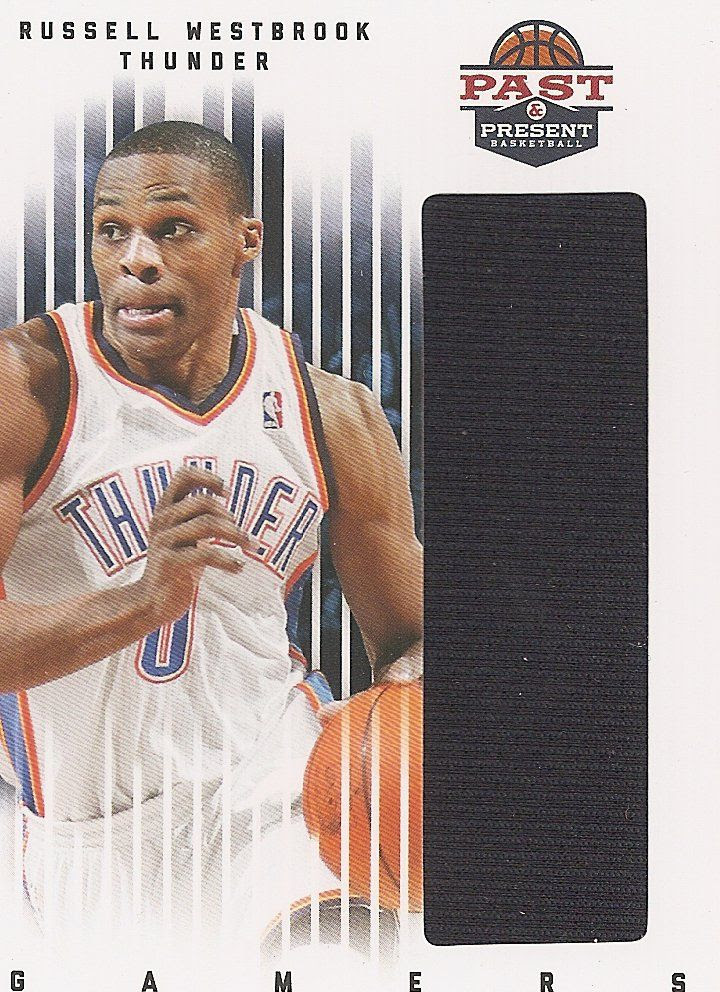 My review box of Past & Present had a Russell Westbrook game used jersey card in it. And it is certainly a generous swatch of jersey! Panini decided to postion a long pieces of jersey on the right side of the card next to the player. I have not seen a jersey card aligned like this before, but this works brilliantly for basketball as the length of jersey mirrors the tall players of the NBA. The white background and 'lined' image the player sits atop of re-enforces the jersey swatch. The whole card comes together in a way that makes sense. 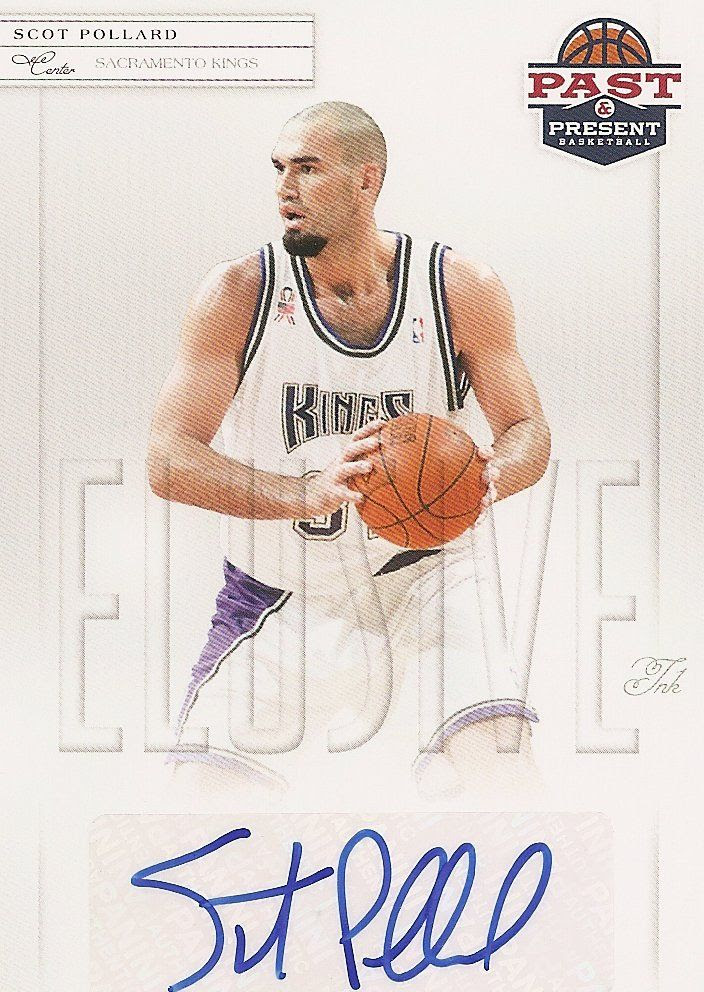 In terms of autographs, I pulled two cards from the Elusives set. The idea behind this set was to include players that have not been featured prominently in a autographed sets before. Now this is both a good and a bad thing. The good is that the product allows collectors to find players of their favorite teams that may have been neglected over the years. The drawback is that these players are 'elusive' because they have not merited companies to make autographed cards of them. Either way though, the cards are well designed just as the rest of this product has been. The white background is great for that modern look. The only drawback is that the cards are sticker autographs. And traditionally, Panini tends not to hide the fact that they are stickers very well. I think once Panini does that, their sticker auto offerings will be better received. 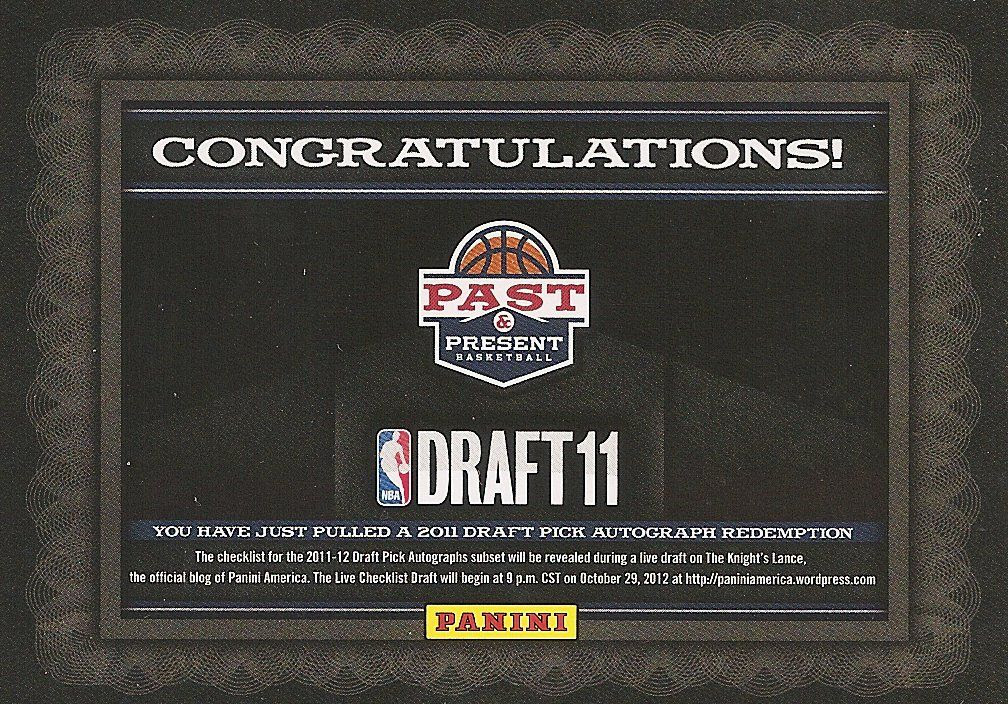 Because of the NBA lockout at the beginning of the season, many things were affected, one of which was the release of NBA rookie cards. None of the products this season have had rookie cards in them. With Past & Present, Panini gets around this by offering redemption cards for rookies drafted in 2011. The one I pulled will feature and autograph on it, but there are non-autographed versions as well. It is still a mystery as to who I will receive, but it's nice to know that there will be a chance of getting a rookie from an 11/12 product. My guess is that these rookie cards may be labeled as XRC in price guides. These redemptions remind me of Upper Deck Artifacts and Be A Player rookie redemptions from hockey. Both those redemption programs were well received so hopefully these will be too.

Overall Rating -
Panini's 11/12 Past & Present Basketball really blew me away. This product is a fun product to bust - the cards are slick, look great, and have tons of variety. For casual collectors this product is something that should be picked up. Hits and inserts are prevalent within boxes as well as the opportunity to get some early cards of the 2011 rookie crop.

The value is there for these cards, but obviously for the high-end collectors this may not satisfy. Many of the autographs in the product may be of players of the past that aren't relevant or worth much in terms of re-sale value.

But for a collector like me, this product makes me want to buy more and more of it. I definitely highly recommend this to fans of basketball. It makes me wish for a hockey product of similar design.

Check out my video review of 11/12 Panini Past & Present: