One of Donruss' most popular brands makes its return to the hockey card world. Elite has been a mainstay for sports like football and basketball for years now... finally, after a long absence it comes back to hockey. Did Panini make a smart decision by bringing this back, or should they have just left it with the other sports? We shall certainly see! 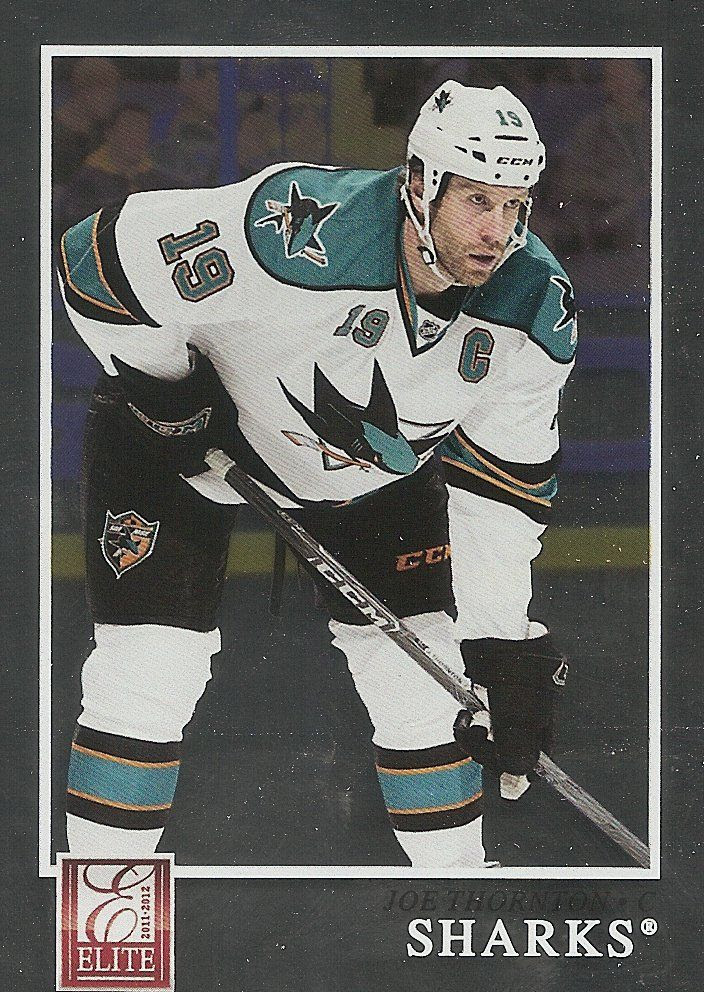 Base Card Design -
If you collected Elite hockey cards back in the late 90's, you will instantly see the similarities between the new Elite base cards and their original counterparts. They look and feel very much the same. The base cards come on a very thin foil board card stock, each card is completely foil. Unlike the nufex cards found in this year's Pinnacle, the foil finish on these cards have no texturing - they are flat and slick. Each base card is very shiny and reflect light very well. Panini produced a very similar feeling card last year in their Playoff Contenders set. Though the foil is nice looking, it is very prone to fingerprints. Handling the cards too much will mar the card. I suggest putting them all in penny sleeves to keep them looking great.

In terms of design, the Elite base cards take the simple approach. The players name and team grace the bottom of the card along with a classy looking Elite logo. The silver foil border frames the photograph of the players nicely. In some instances, the players actually break through the border and step onto the bordering, which is kind of a nice touch. The Elite cards are uncluttered and pleasing to look at. For those who like a very simple look, this definitely nails it. For me, I think the cards could have used a touch more flair, but overall the base cards are well-done. 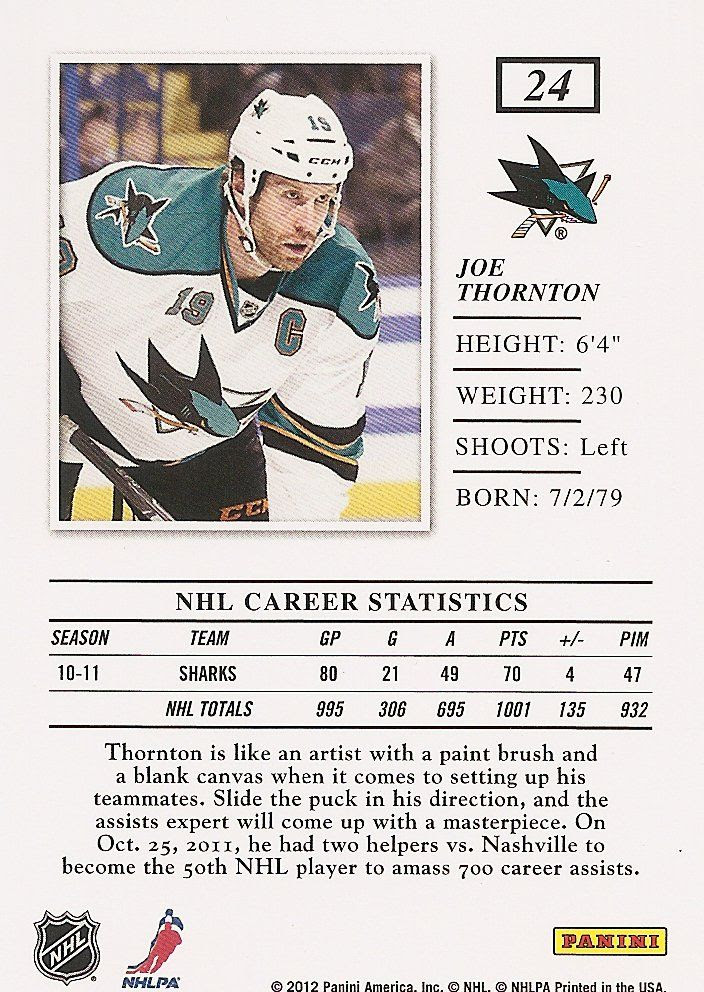 The Elite backs have a simple and clean design to them. All the components that make up the back of the card are spaced out well so as not to be cluttered. You will find the usual information that is expected on the back of a hockey card along with a little write-up on the player. 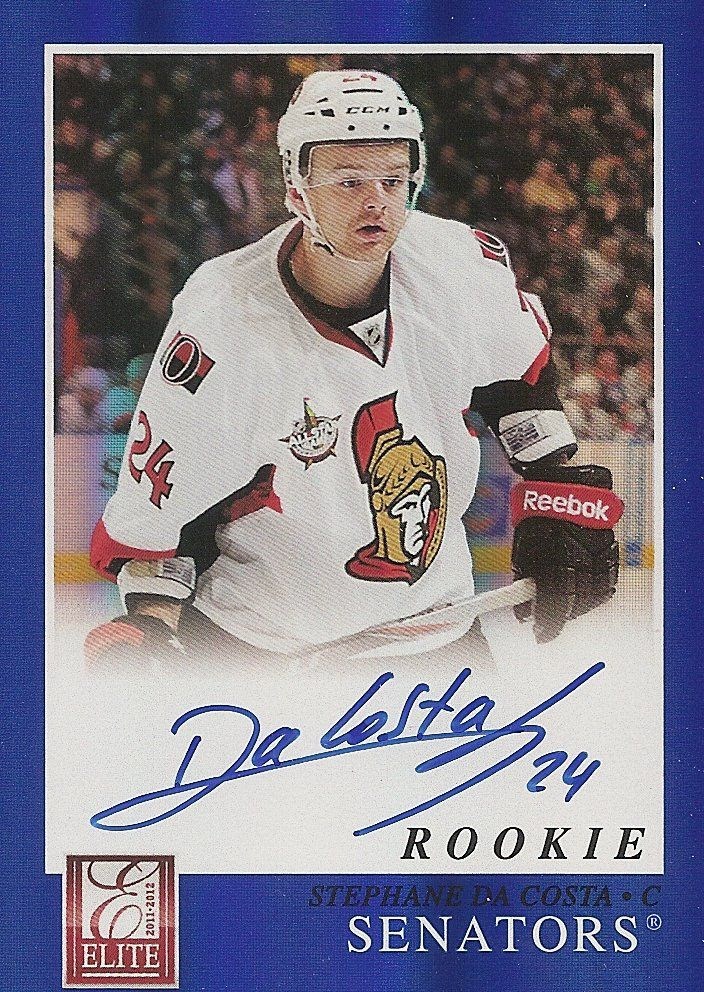 The rookie cards in Elite share the same design as the base cards except that they have a blue border rather than a silver one. Though it's just a simple color change, the effect on the way the cards look is dramatic. I prefer the simple silver borders to these. In a way these cards stand out a bit too much. If I were designing the cards I would have chosen maybe a softer frosted blue color for the border to match the standard base a bit more while having them still stand out as rookie cards. The rookie cards also carry a 'rookie' logo above the player's name. Speaking of which, it can be difficult to read the player's name on the card card as the black font can get lost in the blue border. Some of the rookie cards will feature autographs. The designers have chosen to leave a white-out area for the signature - a nice and practical choice. The rookie cards are separated into two different tier levels according to the checklist. The short printed rookies are the bigger names such as Ryan-Nugent Hopkins and Cody Hodgson.

Inserts/Game-Used/Autos -
A typical box of Elite will yield 2 autographed cards and 2 memorabilia cards. Also found in boxes are standard insert cards as well as parallels of the base set. 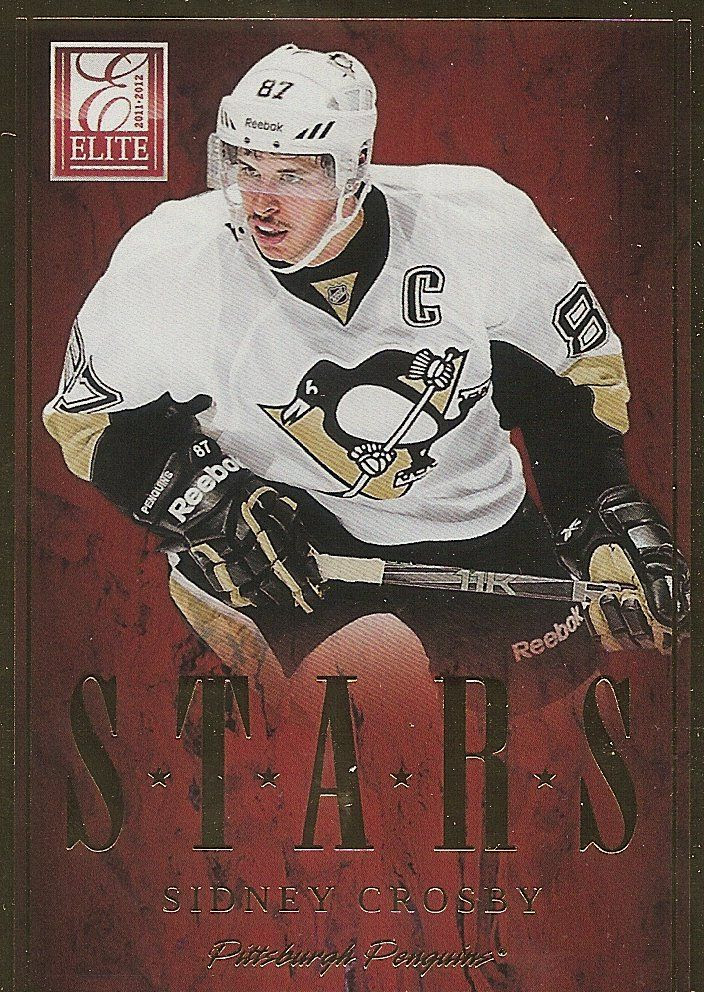 One of the standard insert cards found in Elite boxes are the STARS cards. These cards are unnumbered and do not have an autograph or jersey piece on them. One of the things that Panini has done with many of their sets (from low end to high end) is to include non-'hit' inserts. When Elite came out in the 90's, these types of insert cards were the norm - and many people would chase after them. It's nice to see these kind of cards back in packs, but I know that most collectors have moved on and don't pay much attention to this type of card. Still, the cards look nice and are fun extras for player collectors. The gold border of the card really gives it a premium/special feel. The Elite Series is another insert set that has the gold border look. Though probably not worth too much, they are sweet looking cards that help you feel a tad better than getting all base cards when opening packs up. 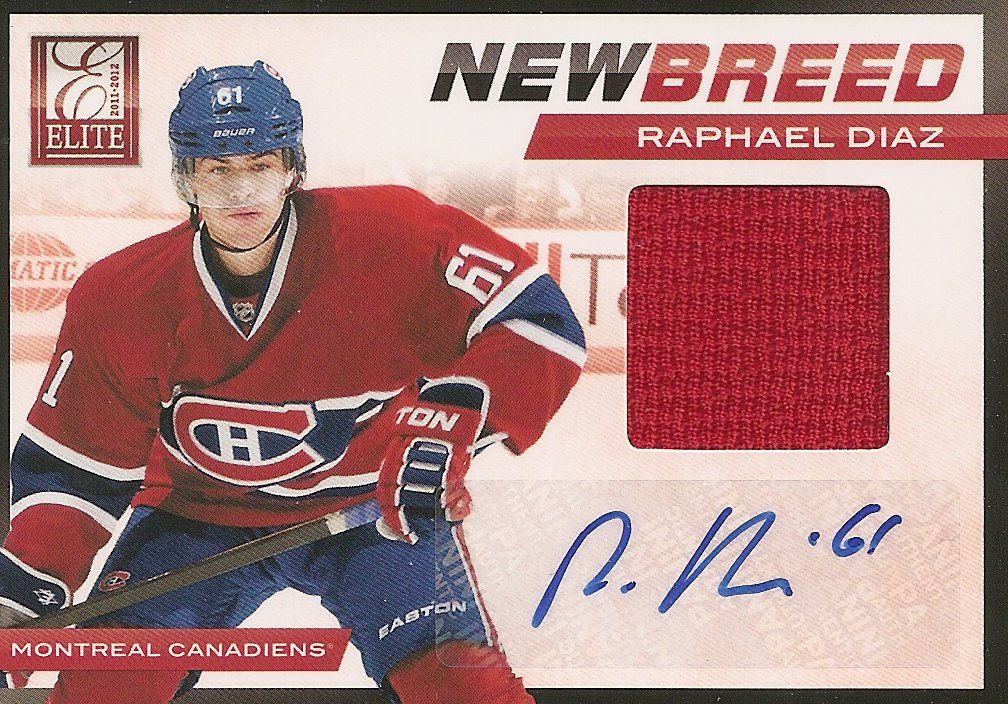 New Breed cards showcase rookies of the NHL. Single jersey versions of these cards to do not feature serial numbering, but variations with autographs like the Raphael Diaz shown above do. This particular card is numbered to 50. The New Breed inserts remind me of the Rookie Material cards from Upper Deck Series 2. I'm pretty sure that the swatches are event worn pieces. The backs of the cards say nothing to the effect that they were ever used in a game, rather they just say the player wore the piece at one time. The design of these cards is also uninspired. They sort of have a generic look about them, but still they are cleanly designed and fun to chase for rookie collectors. Unlike the UD Rookie Materials, these come in more tiers to chase. The Elite Materials cards are similar to these except they also feature NHL veterans. Again, collectors will have to chase all the different levels... simple jersey... autograph... jersey and autograph... patch version... etc. 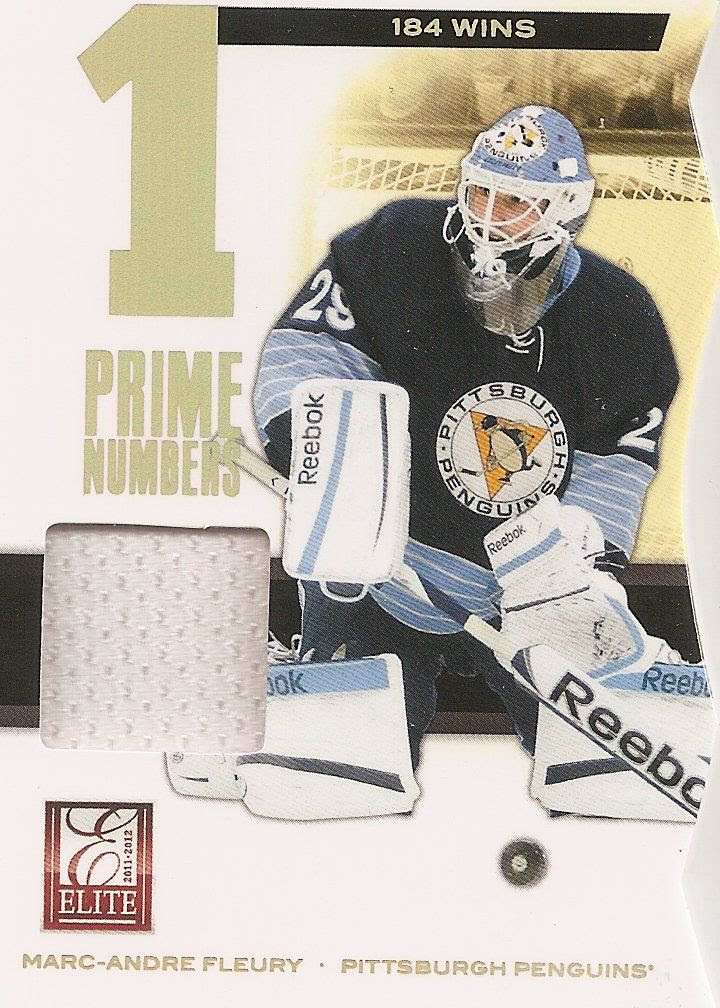 More interesting than the standard jersey, patch, or autographed cards are the Prime Numbers cards. These cards have been designed to be put together like a puzzle. The Marc-Andre Fleury that I pulled is the left-hand side of the puzzle. On the right border of this card is a special die cut that will match up to it's partner, the middle card. A third card will attach to the middle card. The card is very thick and looks very nice with the rainbow foiling. Collectors will have a fun time collecting the three pieces. The total print run of ALL THREE CARDS is shown on the back of the card. So for example, the Fleury card I have only features a jersey and is numbered to 184. This doesn't mean there are 184 jersey cards, that means there are 184 total jersey, autos, and patch variations of the card. Collectors may not be familiar with how Panini chose to section off the cards in terms of the print run. So early on, if you see a crazy patch with an autograph on it selling for cheap... grab it! It's probably VERY LOW numbered. Be on the look-out! 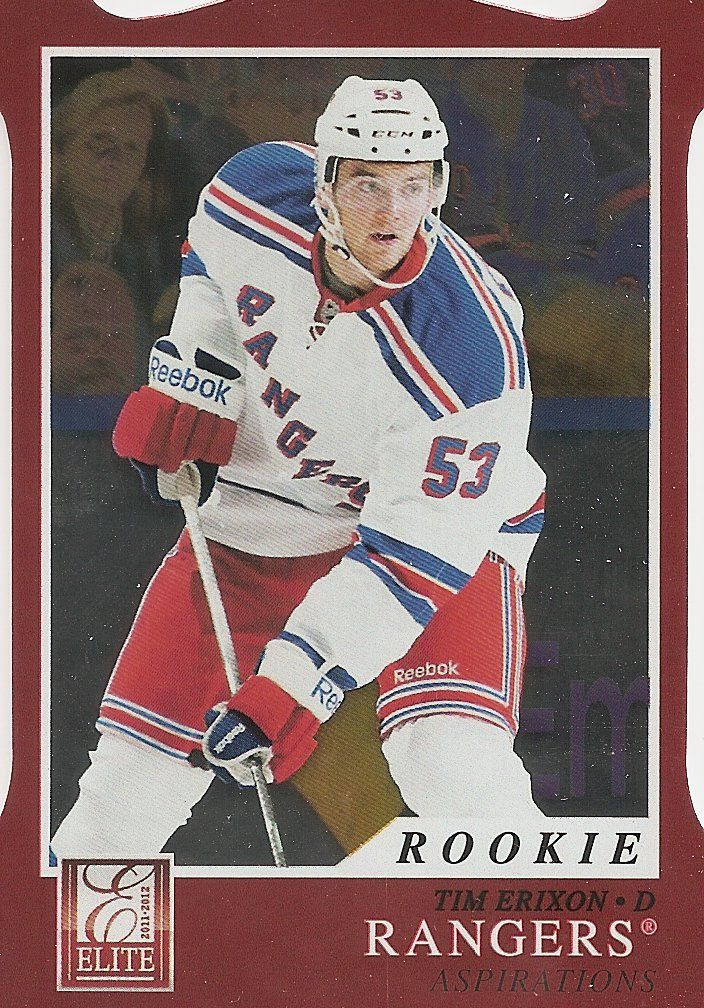 Parallels exist in the Elite set for collectors to find. They are rather common to find within boxes. My box yielded 6 red die-cut parallel cards. The cards are the same as the base except for the red bordering and die-cut shape. As with the blue rookie borders, I am not a huge fan of the bold red borders of these cards - they are a bit much for me... and I'm not exactly sure what the die-cut is supposed to be of. Sometimes Panini seems do die-cut cards just to die-cut them. I've seen this in other sports as well. It's just something I am not a fan of. If you like it, that's great!

There are other inserts to be found in Elite, but I would like to mention one other that was interesting. Panini has included Social Signatures into the set. These cards carry special inscriptions of player's Twitter handles. I thought this was a pretty unique idea and I think it'd be great fun to pull one. Unfortunately, my favorite player, Logan Couture, doesn't have one... though he is actively tweeting on Twitter... maybe next year Logan!

Overall Rating -
Elite is a solid offering from Panini. Each box will net you a couple autographs and memorabilia cards along with a slew of inserts, rookies, and parallels. With 20 packs per box, Elite takes a little longer to bust than some of the products that have been recently released. I enjoyed opening my box and seeing all the different things come out.

I was skeptical about Elite upon hearing of its return to hockey, but I have to say I was pleasantly surprised by it - I particularly like the Prime Numbers cards. At around $100 a box, it is a solid buy that many collectors can afford. It's worth a shot to try a box or two of Elite. Best wishes on your breaks and let me know what you get out of it!


Here's my box of Elite from D&P Cards in Sacramento, CA!