Panini steps up their game with their just released Contenders hockey card set. Various tweaks and changes from last year have really improved the product. It's great to see Panini making strides to shake up their hockey card lines for the better. Let's see what a typical box brings us! 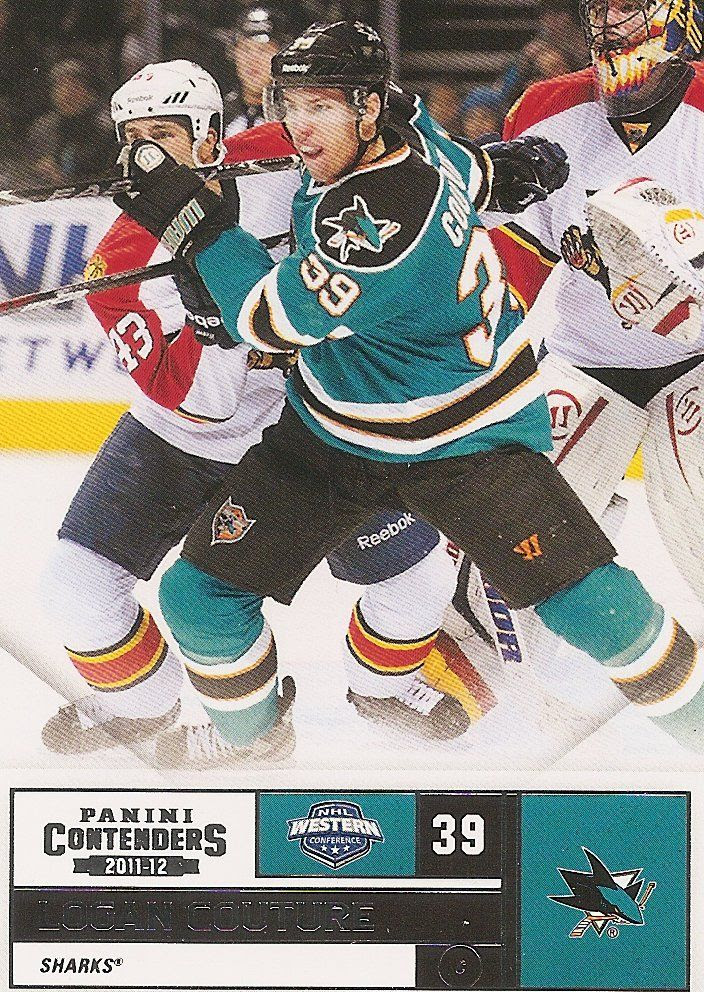 Base Card Design -
Contenders this year goes with an almost full bleed photography look rather than the ticket aesthetic of old. The cards are very bright and vibrant - perfect for a sport played on shimmering ice. The bottom border of the card has a subtle marbled ice background along with the main information box. All these aspects play well together to create a successful base card. The information box is actually one of the nicest aspects of the base card. It has the perfect amount of foiling to separate and highlight key pieces of information. One inclusion that usually isn't included is the conference (west or east) that the player contends in. It's a nice touch for a product that focuses on the playoffs as a theme. These base cards show me that Panini wants to up their level of quality in terms of design, and I hope their future products continue this trend. 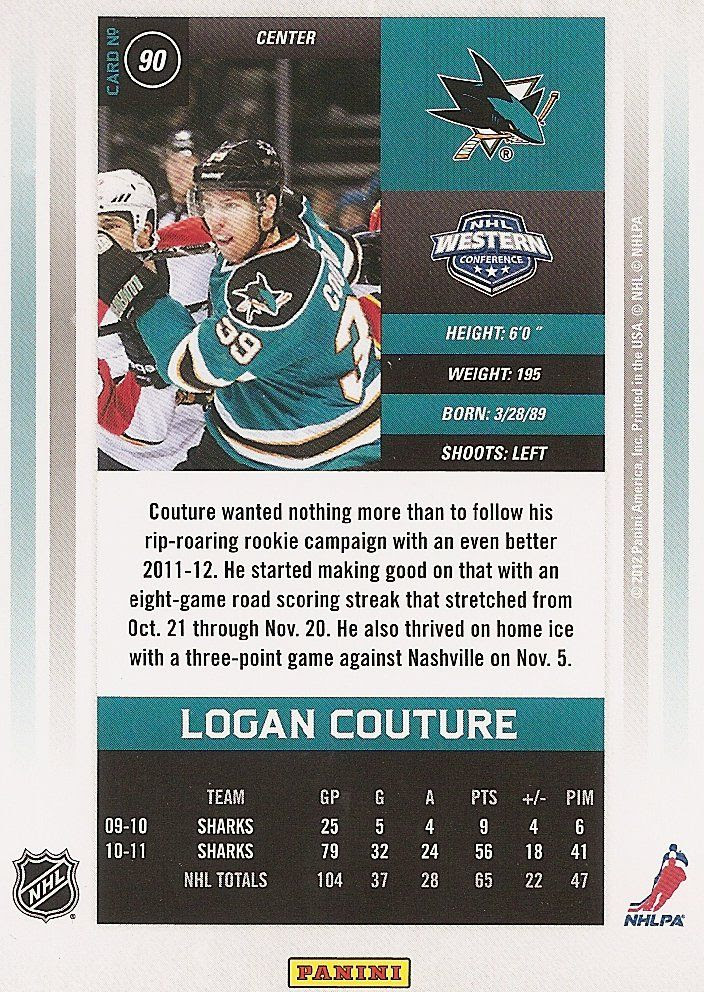 The back of the base card doesn't excite me as much as the front does. It's much more muted. As you can see all the parts of the back are separated into a box layout. The design is functional, but bland. The backs contain the standard paragraph of information as well as up to 3 years of statistics. 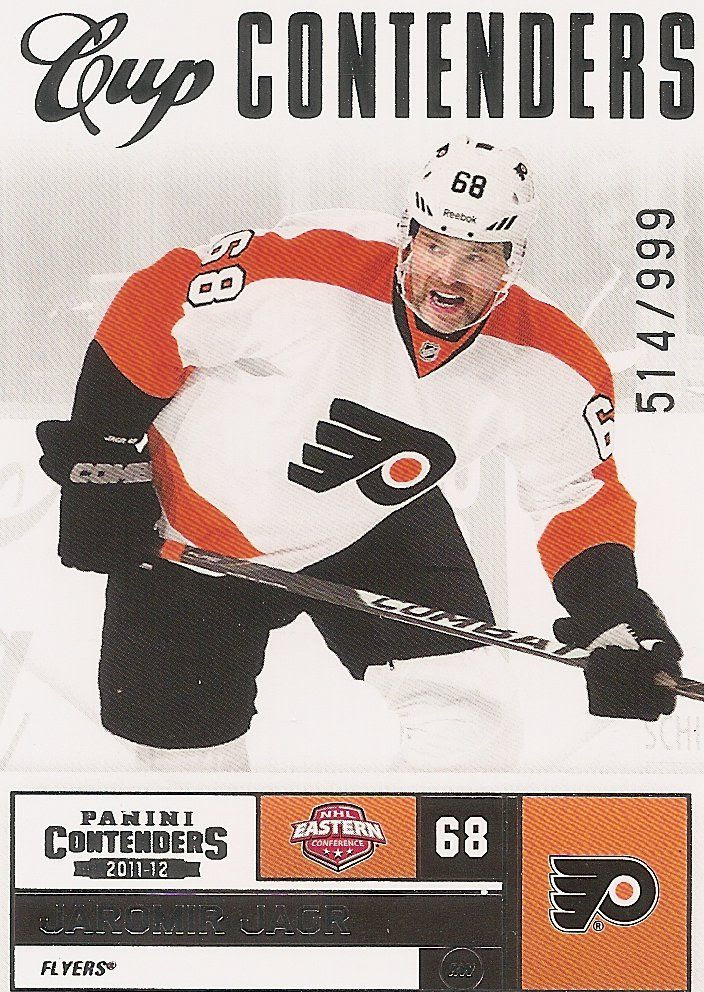 Cup Contenders is a numbered subset of the main base set. Much of the card is similar to the standard base card except for the fact that these cards have a ghosted out white background rather than the full color photography and a large Cup Contenders logo atop the card. These cards add a little value to the product, but I don't see the need for them. It simply doubles up many of the players in the main set. These cards remind me of the Essentials cards within Upper Deck's SP Authentic line. They shouldn't be too hard to find for specific player collectors as they are all numbered to 999. 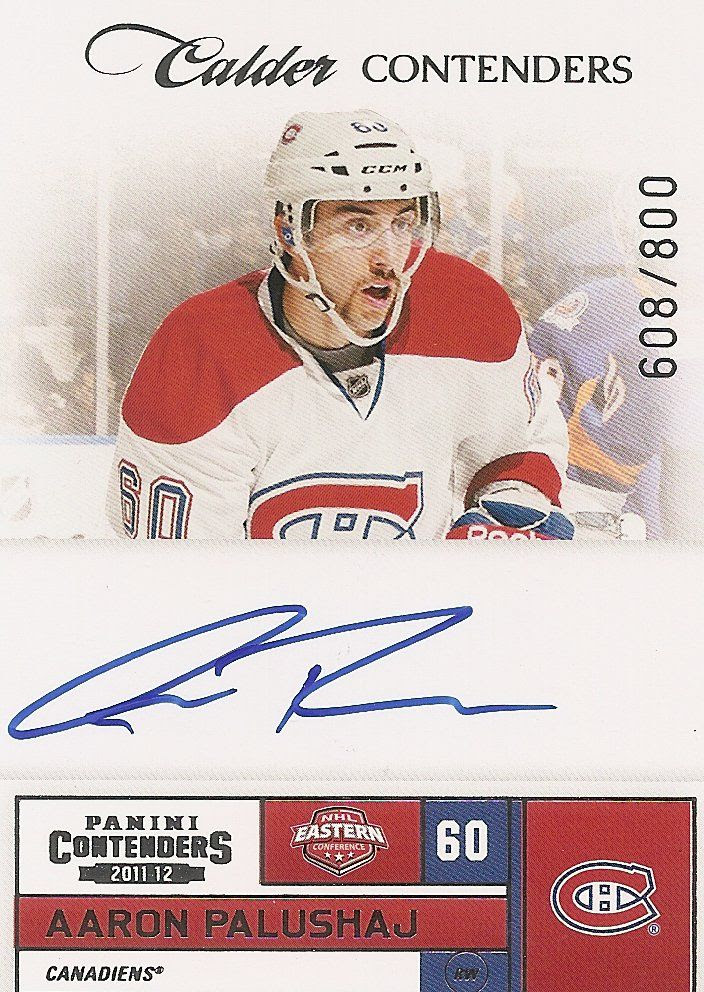 The Calder Contenders cards are the rookie cards found in the Contenders set. There are both autographed and non-autographed versions of the rookies. The lesser named rookies don't have the autograph treatment and are numbered to 999 whereas the bigger name auto'd rookies are numbered to 800. The number 800 is an odd choice as not many cards carry that serial numbering. My theory is that it makes the cards more rare than their SP Authentic counterparts (which are numbered to 999). Will collectors see that there are almost 200 less autographed rookie cards per player and cause the Calder Contenders to have a higher value? Time will tell... it should be something interesting to see. Speaking of numbering, this is something totally new for this line of cards. In the past it has been standard for Contenders to not number their cards and have collectors guess as to which ones were short printed. I for one like this change... a lot! And notice the serial numbering is on the front now... another great move! Lovin' it! Thanks Panini, these two improvements make a definite positive difference.

Inserts/Game-Used/Autos -
The main draw of Contenders have always been the hard signed rookie ticket auto cards. This year it's the same, but with a few more interesting gems to find. Panini has introduced some new inserts for collectors to clamor over with this release. 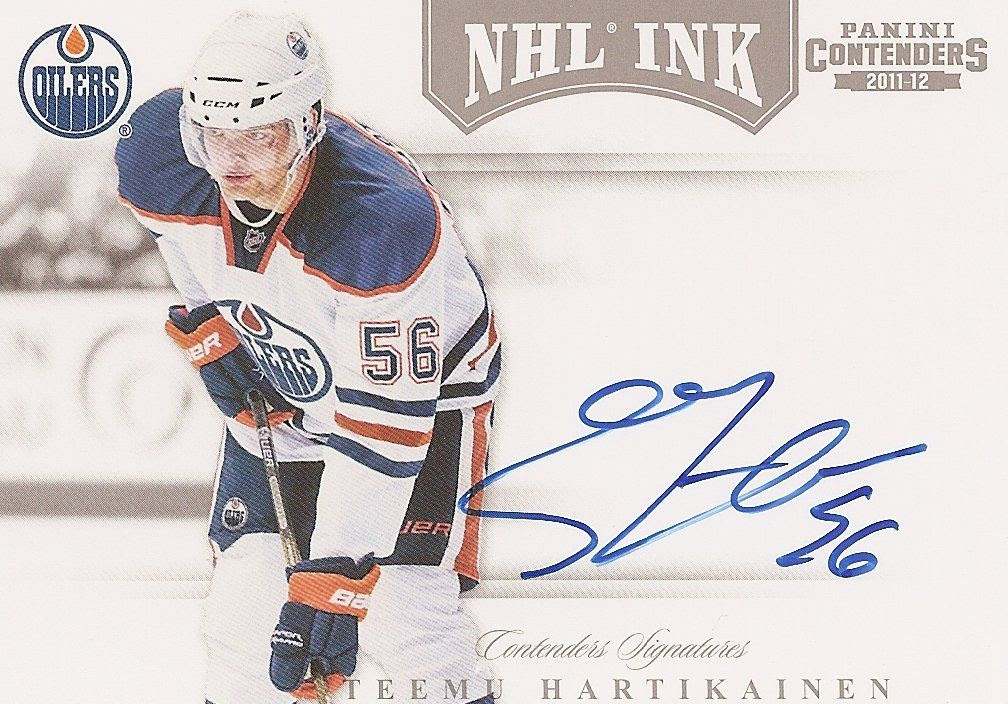 The NHL Ink cards are nice looking standard autograph cards that can be found in Contenders. The large white background and silver foil along with classy font make this card very appealing. Add to that plenty of room for a blue ink autograph and you have a real winner here! Though these cards are unnumbered, they should make for a very attractive set for collectors to complete. My guess is that some of the NHL Ink cards will be short printed and harder to find, which could make completing the set a challenge. 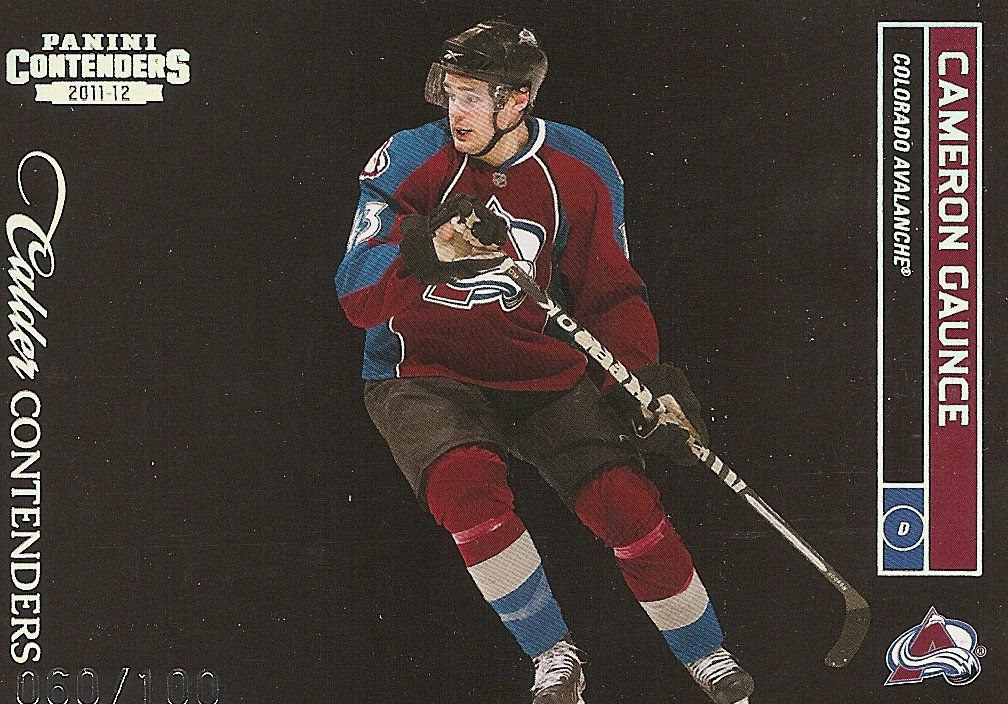 The Calder Contenders insert shown above is a beautiful addition to the Contenders line. These cards are stunning to see. Each card is very thick (like it could hold a patch piece), and is limited to 100. The foil on the card has a rainbow shimmer to it that really elevates the look of these cards. Though they are amazing looking cards, they may be prone to chipping and damage. The all black background will show any imperfections on the face or edges. The Cup Contenders have a similar look to these cards but feature non-rookie NHL stars. Chris, the owner of D&P Sports Cards was lucky enough to pull a John Tavares silver ink autograph and patch. The card is a real beauty. Check it out in my video break of Contenders at the end of this review. It is a GREAT looking card. 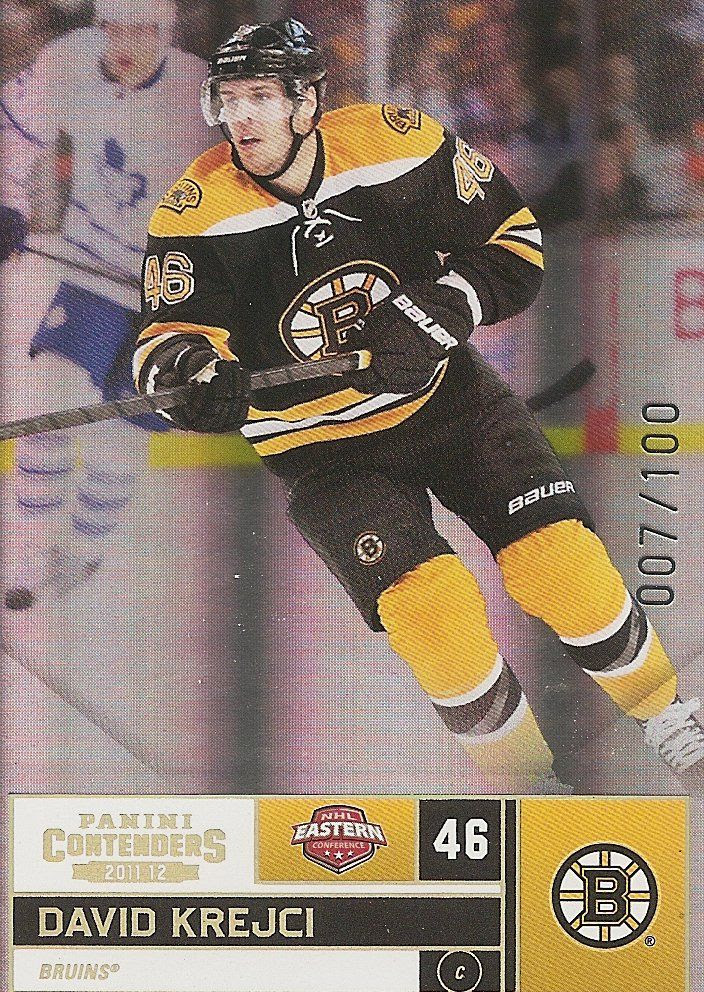 Foil parallels cards are another inclusion in this year's Contenders set. This year Panini has really put aside a heavy handed foil approach to the cards, but these foil parallels sort of bring that back. The card looks nice and is serial numbered to 100. I'm glad Panini did not overuse foil in their hockey products, having a foil parallel card such as the one above works well when there aren't too many of them.

Collectors will find many more inserts in their boxes of Contenders. One that I will mention but have not seen in person are the booklet cards. Some booklet cards feature up to six autographs on them. They are sticker autographs, but are amazing pulls regardless that they are not hard signed. I definitely wouldn't complain if I were lucky enough to pull one.

Overall Rating -
This year's Contenders blew me away. I honestly was not planning on liking the product much after what was released in 10/11. Last year, Contenders had the rookie ticket autos, thin foil board inserts, a few inserts with acetate and leather feel, no serial numbering, and a chance at an impossibly hard to find golden ticket card. It was a nice product, but not one that I was really interested in purchasing multiples of.

11/12 Contenders is a completely different animal.

This year the cards have been re-vamped to look classy. Both base cards and inserts have been vastly improved in the way of their design. Serial numbering has been introduced as well as game-used patch cards. And of course there is the possibility of multi-autograph booklet cards. Wow! This is the way to innovate and improve upon a product.

Kudos to Panini for doing such an awesome job. Boxes run slightly over $100. There are 18 packs per box with an average of 3 hits. I have no problem with highly recommending this product to any hockey collector. This year's Contenders oozes quality... go and get some!