Upper Deck products this year have been few and far between. Collectors have been starved to open up some new hockey product from UD and now finally they can. The venerable SP Game Used cards have arrived on hobby store shelves and in online inventories. Is this product worth the relatively high price point? Let's crack it open and see! 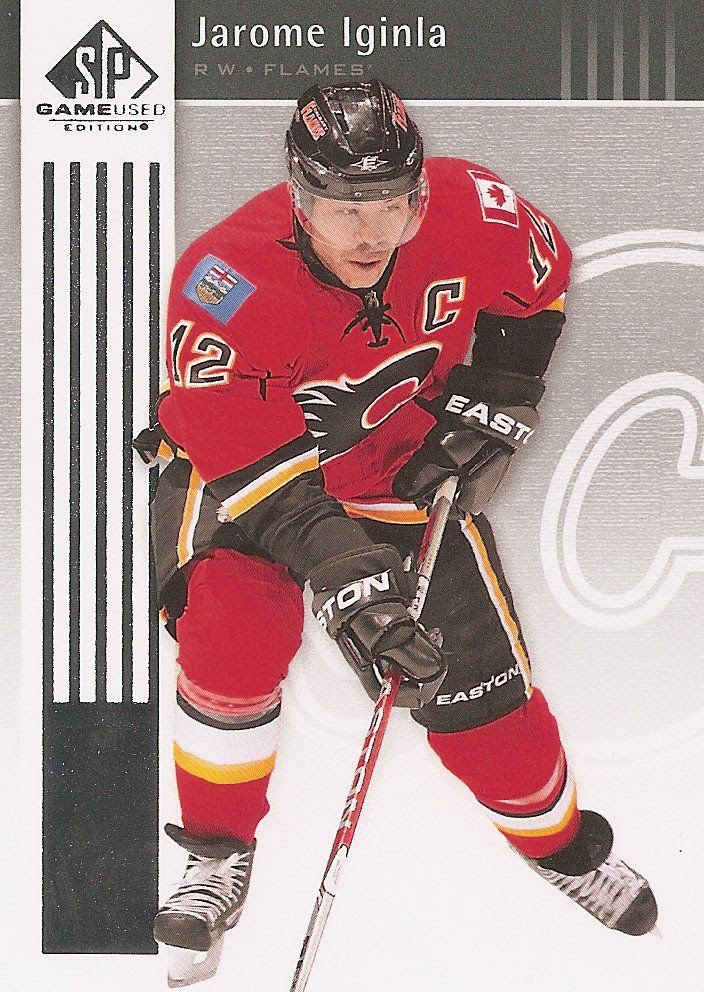 Base Card Design -
The SP Game Used base cards this year employ simple geometric lines and rectangles to shape the look of the card. The card is bordered by a dark grey rectangular portion at the top, as well as rectangular foil lines on the left side of the card. A full-color photo of the player pops up on the front of the card amidst a silver background adorned with the team logo. The design uses touches of foil to highlight certain aspects of the card. Though I usually am a huge fan of Upper Deck base card designs, I do not find this one particularly appealing. To me these base cards fall into a 'no-man's land' type territory. They are not busy enough to be exciting or dynamic... and they are not sparse enough to have that great simple elegance that UD usually shows in SP Authentic designs. All in all I found the base cards to be a disappointment. Given then you only get one per pack, I don't see collectors clamoring for these cards or trying to complete a set of these - which is a shame for such a highly priced product. 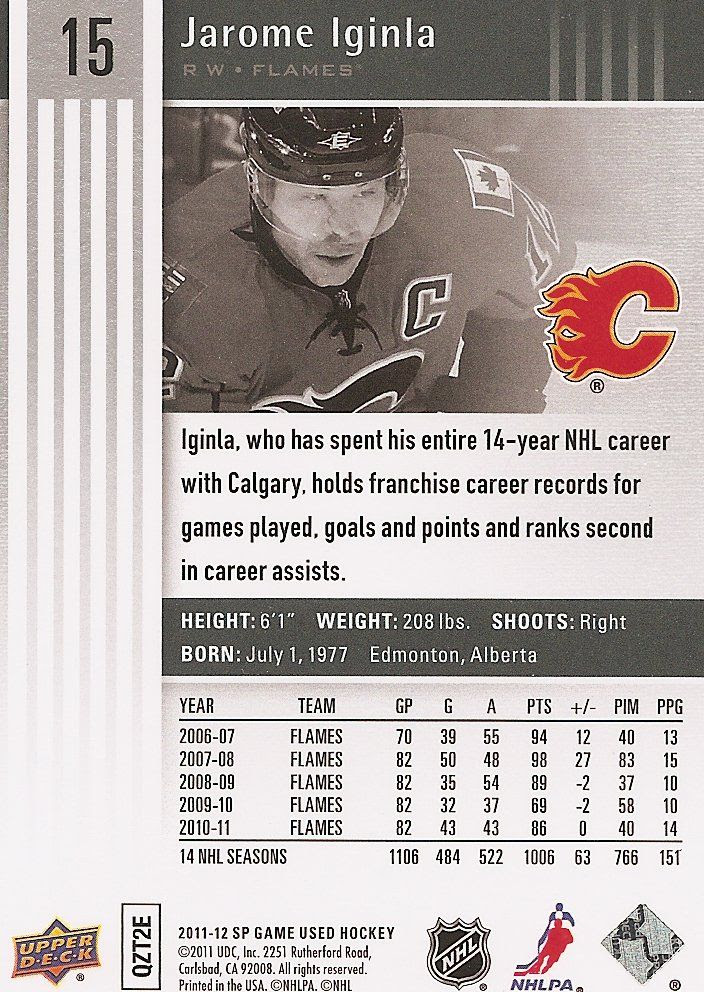 The back of the card mirrors the front of the card in many ways. The geometric lines are revisited sans foil, and the player photo is back sans color. A short blurb of information is given about the player as well as up to 5 years of statistics. Just as with the base card fronts, I find the backs functional but un-special. Well, at least they're consistent! 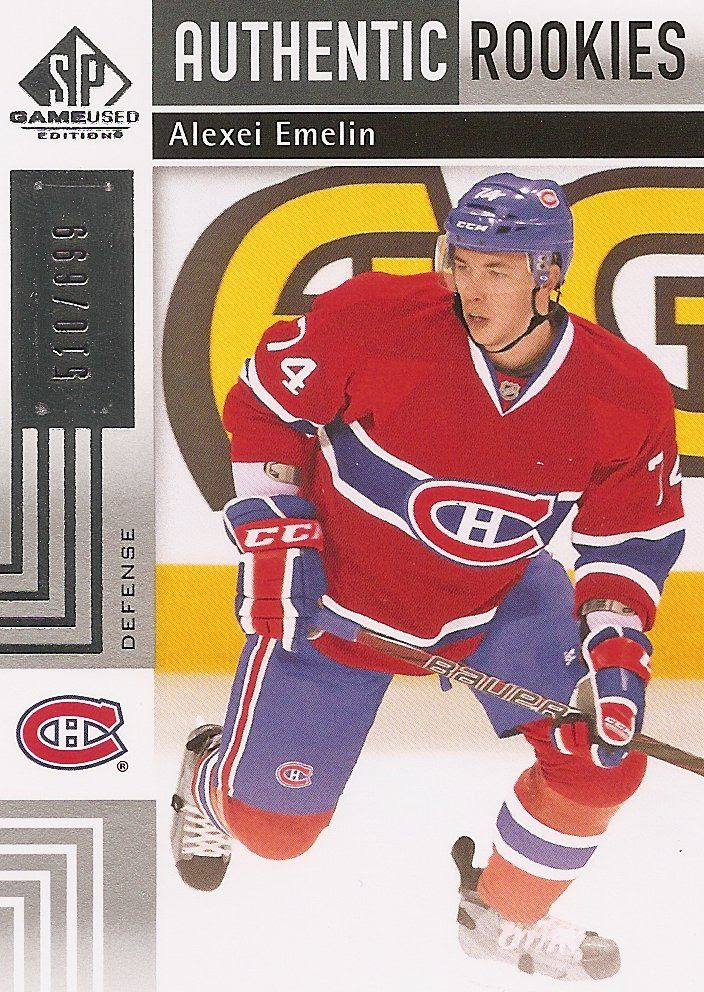 The rookie cards that make up the tail end of the main set have a related, but slightly different look than the standard base cards. Rookie cards in SPGU are a part of the Authentic Rookies subset as shown at the top of the card. Also, instead of having the plain sliver background with team logo, the rookies have action photos. The rookie cards come in two limited variations. The top rookies from this year's class are numbered to just 99 copies - all others are numbered to 699. SPGU is not a product known for its rookie cards. And this year's design doesn't help. These cards are busier than their base card brethren, but I'm not sure if it's in a good way. Because the main rookies are limited to only 99 they will carry some good value, but I don't see these cards making the must-have lists of the majority of collectors. 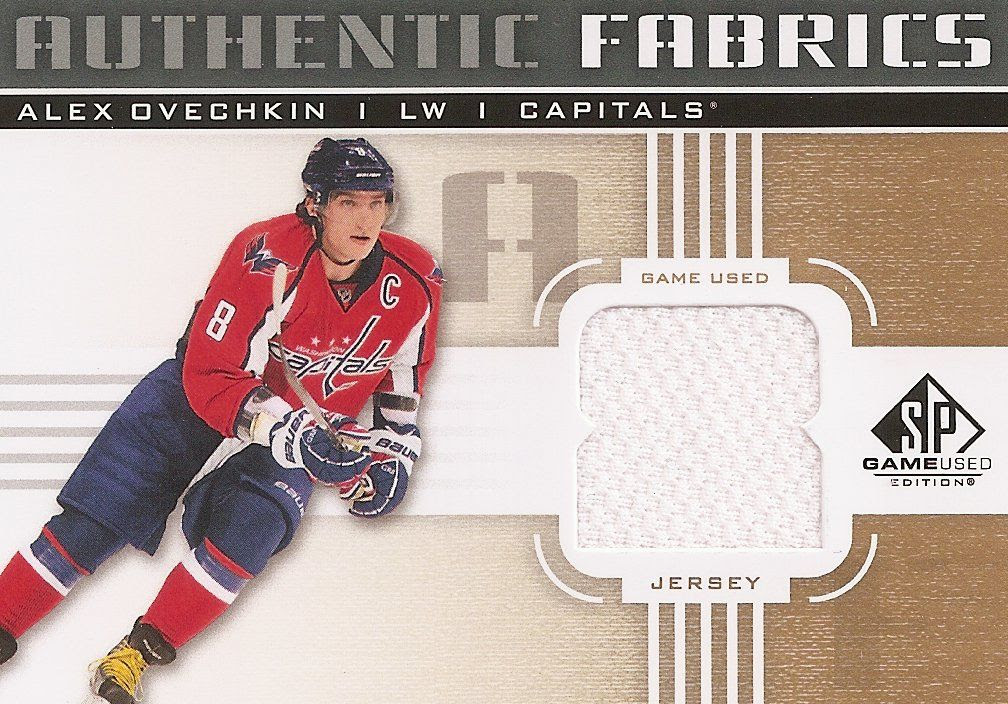 The Authentic Fabrics jersey card is what you will typically find the most of in a box of SPGU. These cards feature a swatch of game-worn material on the front. The windows of these cards are shaped to a letter, number, or symbol. Collectors can collect all the different variations of these cards to spell out a variety of things. For example, for Alex Ovechkin you could collect all four cards to get: G-R-8-8 (Great eight). This is a sneaky (but fun) way that Upper Deck has gotten a little more out of these cards. In previous years the Authentic Fabrics only came in the square variety. This year collectors can chase the different variations and come up with fun ways to collect. I'm already thinking of putting combinations of colors together to make a set of the same player look unique. In the end though, these jersey cards have pretty much played themselves out. Besides the unique variations this year, it isn't too much different than in the past... and these cards are getting a bit old and tired. The Authentic Fabrics come in both numbered to 100 variety as well as the standard unnumbered kind.

Collectors can also find autographed manufactured patch cards within SPGU. I find this extremely strange for a product called 'SP GAME USED'. Shouldn't everything from this product be from something used in an actual game? In the two boxes that I purchased, I did manage to get two manufactured letter cards. I guess Upper Deck really wants to help people with spelling because here, like in the Authentic Fabrics before, collectors get the chance to collect and spell out different things using these cards. In the video above, the last hit I got was an Evander Kane autographed manufactured 'C' card. I am assuming since he is in his Canadian uniform that the letter 'C' is part of the word C-A-N-A-D-A. These cards are great when they are all put together, but doing so is not an easy task. The cards are difficult to find and typically pretty expensive for what they are as well. My other manufactured letter card was of Jordan Eberle. I chose not to show it because it was a redemption card - a bit disappointing since this product was delayed so heavily. 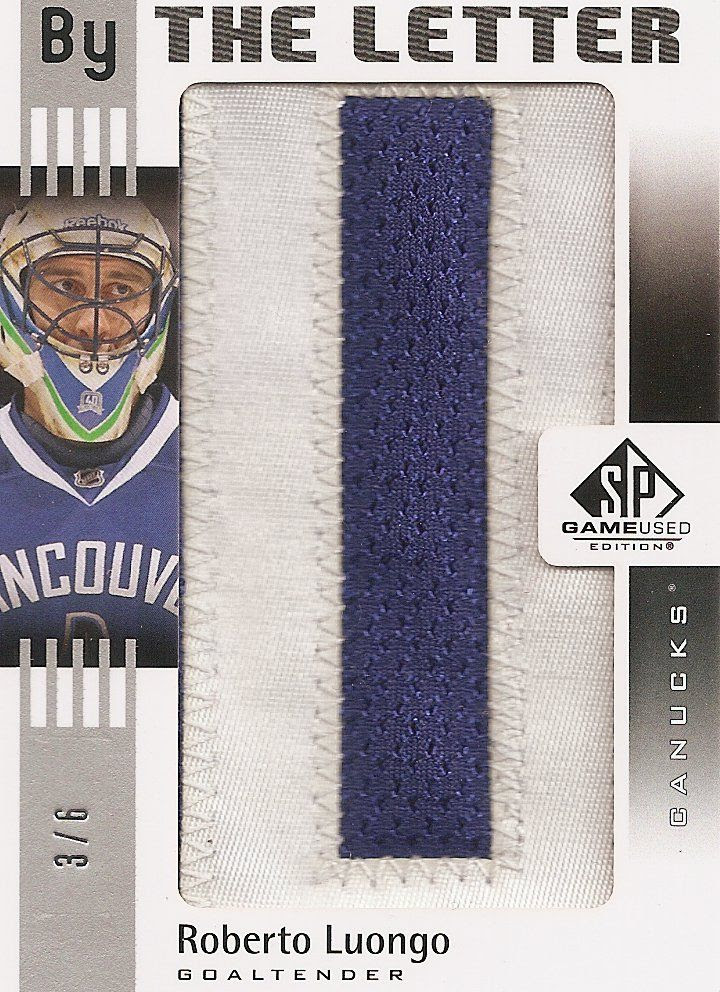 My greatest pull from my boxes was this Roberto Luongo By the Letter card. This is a spectacular piece. And this is the type of card you hope to get when buying SPGU. The card is the actual letter from the back of a game-used Roberto Luongo jersey. This card is numbered 3/6.. the first 'O' in Luongo. Upper Deck did a very nice job with this card. It is very clear that this is not a manufactured card and the photo of Luongo is a nice size - sometimes with large pieces of memorabilia the photo of the player can be too small... but not here. Kudos to Upper Deck for doing their really high-powered cards the right way. Cards like the Luongo come few and far between... but there are some pretty spectacular cards to find in SPGU this year if you're lucky. Look out especially for the new Supreme Pad cards. These feature giant pieces of the goalie pad. I've seen some hit eBay already, and they are great cards. Check them out for yourself!

Overall Rating -
I consider myself very lucky for having pulled the Roberto Luongo By the Letter and Jordan Eberle autograph. I would have to say that this is not typically what you find in SPGU. Boxes of SPGU are about $180 right now. For that $180 you get six packs with most of those packs containing plain jersey cards usually tossed around in a $1-$5 bin. I witnessed a break where one box only had six jersey cards - nothing else. I was shocked. Obviously Upper Deck made a mistake with that box and should do something about it... but many of these SPGU boxes will disappoint in a major way.

I remember striking out majorly with SPGU last year and I expected the same results this year. Like I said, I did pretty well, but it's not a risk I'd recommend others to take. The best way to get your hands on SPGU is to let the high rollers bust open all of the product and get what you need from eBay or from trading.

So... do I recommend this product... no. Only those who have a lot of extra cash should be busting this stuff. It's not a value product. But that being said there are some really awesome pulls to be taken from SPGU. I will enjoy seeing them all opened up...

Here's my box of SPGU from D&P Cards in Sacramento, CA: