"Captain-C" = "Captaincy" - Get it? Nice play on words ITG! Perfect for a set like this composed of only players who have earned the coveted position of captain for their teams. With this set ITG has once again provided hockey collectors with fun and specifically themed cards to add to their collections. By only including captains in this set, collectors can rest assured that the players they find will be a solid group of individuals who have the prized 'C' on their sweaters. 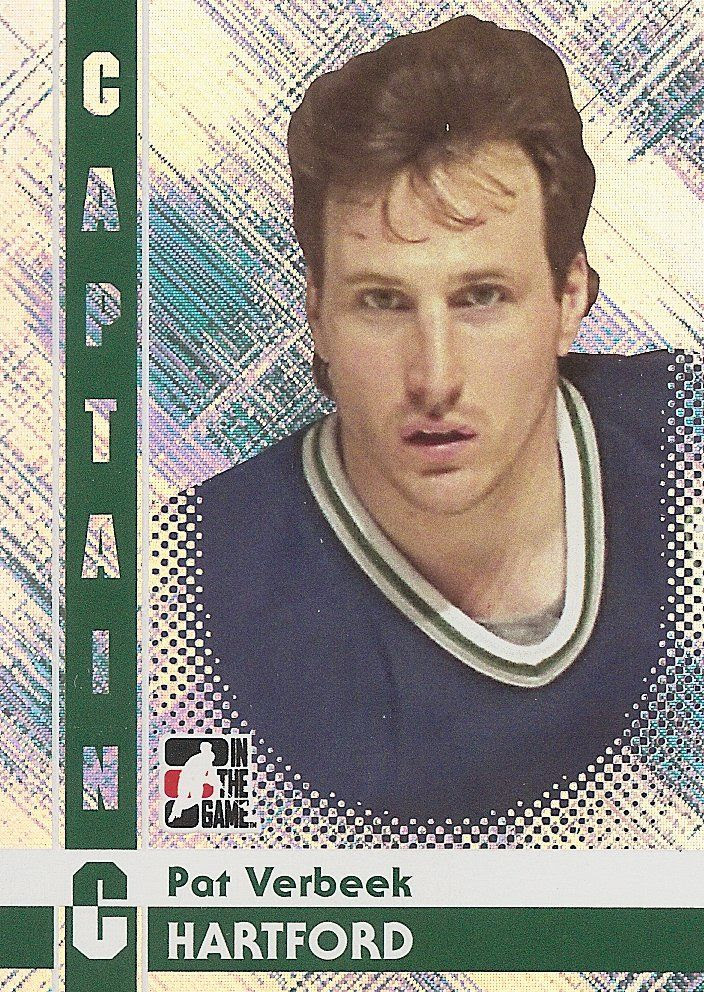 Base Card Design -
With recent ITG one-pack-box products like Enforcers and Canada vs. the World, the base cards have been more insert oriented. Captain-C brings back the standard base card in a shiny, spectacular form. ITG has given the base cards a foil background treatment - something really only seen on some of their higher-end products in the past. Scans of the base cards really don't do them justice. There is a streaking effect to the shimmer that must be seen to be appreciated when looking at these cards. I've been watching many breaks of Captain-C, and over and over I have heard collectors praising the way the base cards look. While I enjoy the foil on the base cards, I am less a fan of the rest of the base card graphics. I feel that some ITG products have moved forward in terms of having modern designs. The design ITG uses on these base cards though is a bit too plain for my liking. The solid starkness of the colors is what makes this design dated.  And while it's great that Captain-C features pretty large photographs on the cards, a few of the older looking photographs clash a bit with the foil background. 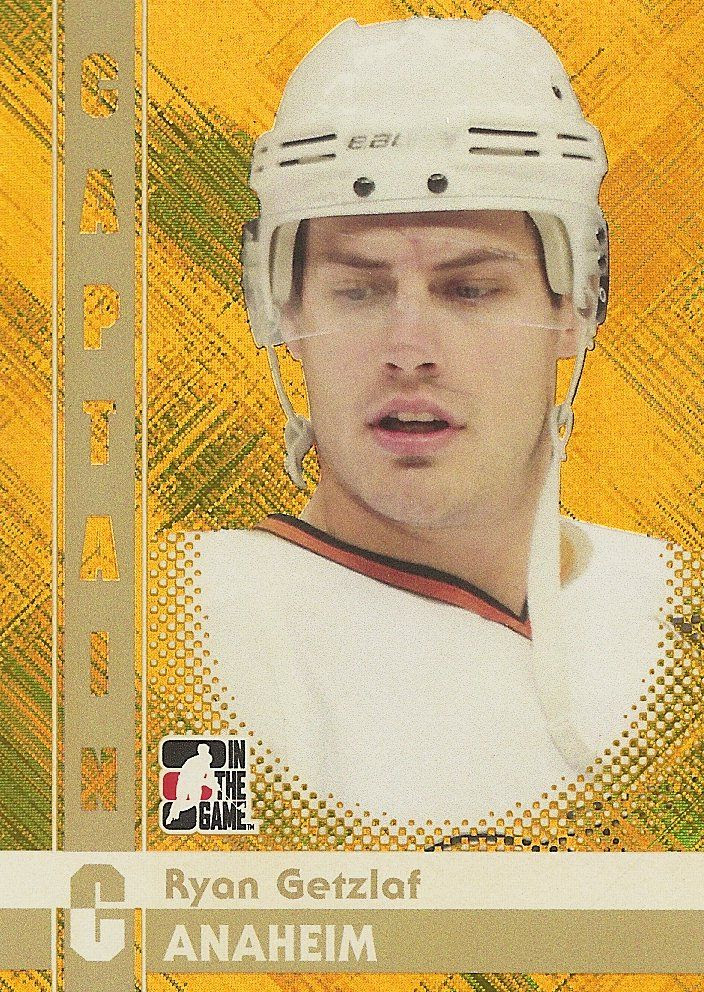 So while I am a huge fan of the glimmering foil, the rest of the base design leaves me wanting. Each pack of Captain-C comes with 3 base cards. Though not stated on card, these cards are limited to only 150 of each according to the ITG website. Gold versions of the base cards can be found one per pack.  These are limited to only 50 copies of each.

Inserts/Game-Used/Autos -
Each box/pack of Captain-C comes with a mix of five game-used cards and autographed cards. Some of the autographs and memorabilia cards are more short printed than others. Consult the ITG website for more information on which cards are short printed. As usual, most cards do not show a print run and are not individual serial numbered. It is important to visit ITG's site and find out the rarity of the cards you pull. 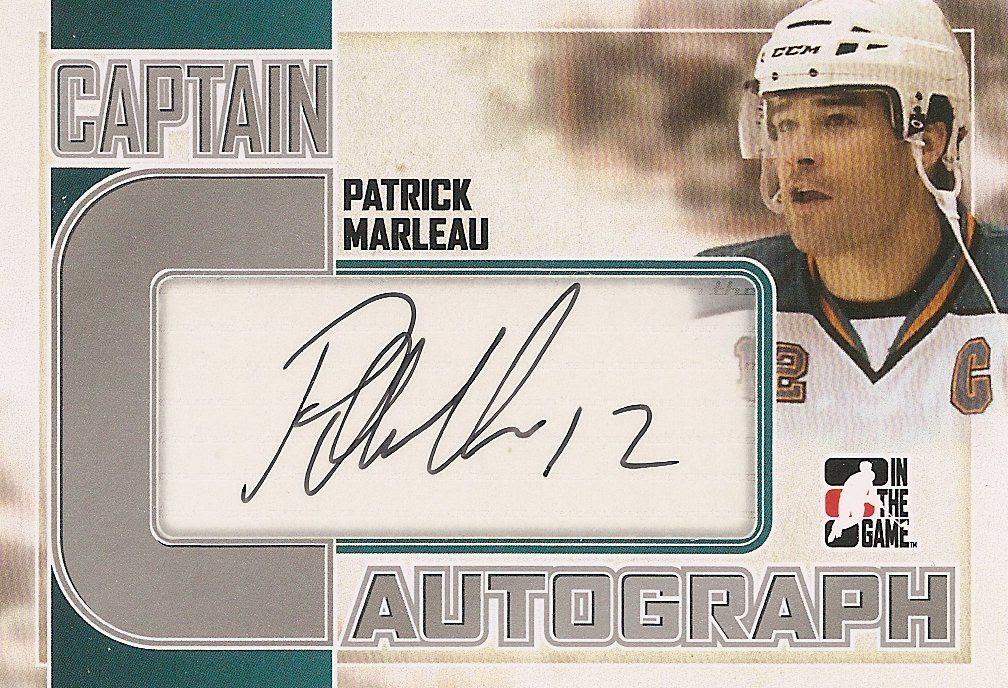 The standard autographed card in Captain-C is just like the Patrick Marleau shown above. You can certainly tell it is an ITG autograph card design. Though it has the Captain-C brand name featured on the left side of the card, it shares similar characteristics of all ITG autographed cards that run throughout their product lines. As usual, the autographs are on stickers but blend in very well with the card so it is difficult to tell it is a sticker-autograph rather than an on-card auto. These cards also do a nice job of featuring the team colors of the player so they look great alongside licensed NHL cards. I also like the photos that ITG used on these cards. They have been very good about hiding the fact that they don't have an NHL license. As you can see with Marleau, you can definitely tell he is with the Sharks even though there is not a Sharks logo to be found.  Slick job ITG! 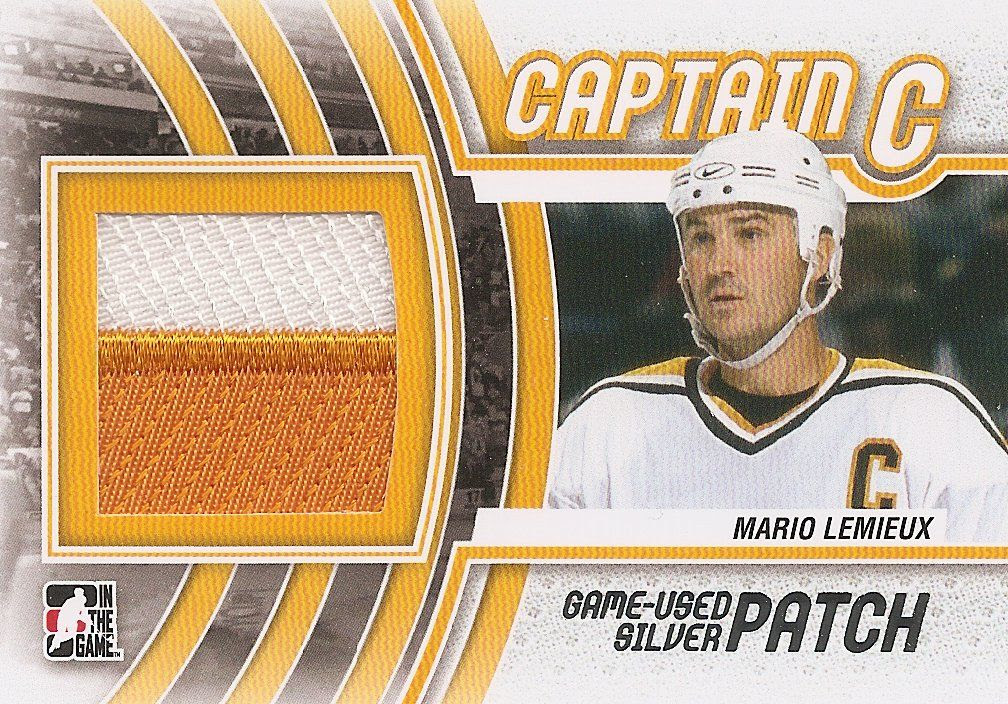 The standard jersey and patch cards in Captain-C are like this Lemieux card shown above. I am a big fan of these cards. They are very bright and show a sense of modern card design. The graphics on the card are vibrant and do a great job of showcasing the team color. I also love the fact that the level of the card (silver or gold) is in foil. I always feel that a tasteful touch of foil on a card does a lot - and it certainly looks great here. And just like the autograph cards, the photos here also mask the fact that ITG doesn't have an NHL license. A quick glance at the Lemieux definitely gives off the impression of the Penguins. On the back of the card, it clearly states that the material on the front of the card came from a game-used jersey that Mario Lemieux wore during a Pittsburgh Penguins game - impressive. 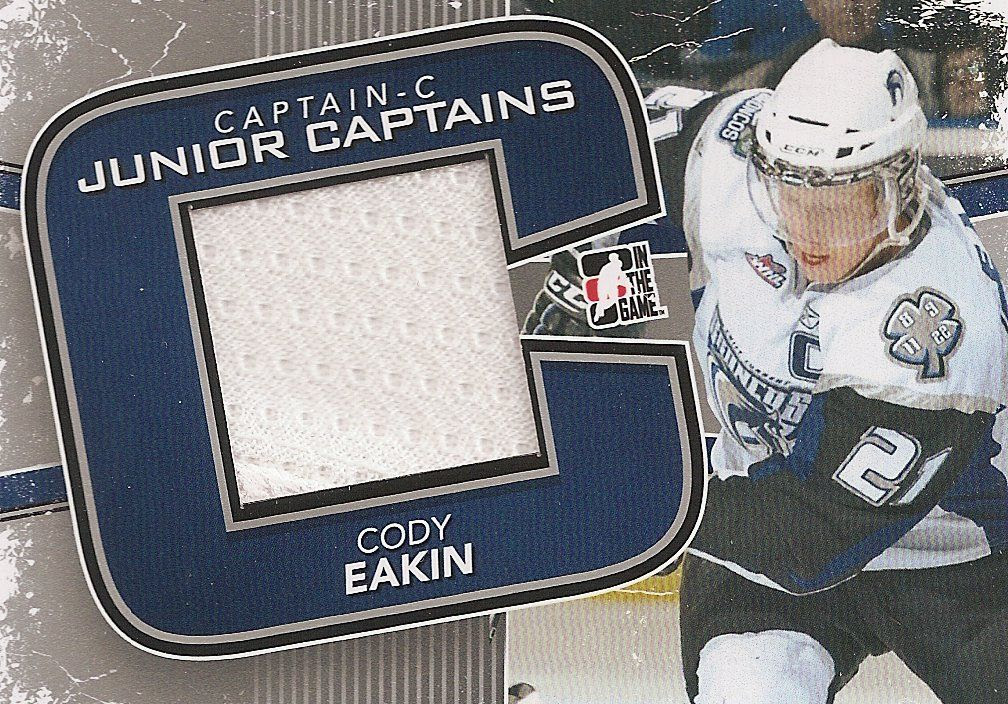 Not all of the players featured in Captain-C are NHL captains. ITG takes the opportunity to get some younger players into the mix as well. Here we have a card of Cody Eakin when he was captain of the Swift Current Broncos. It was a great idea to add in captains of junior teams to the product so the player pool could be more diverse.

Some other great inserts can be found in Captain-C as well. ITG has included cards with game-used sticks as well as the actual captain's 'C' from a game-used jersey. Because the 'C' is so large, they have been broken up into 2 cards. Collectors can have fun chasing both parts to put together an amazing piece of memorabilia.

Overall Rating -
Captain-C from ITG is definitely a winner - just like the players it features. ITG has stated that it has only produced a very limited number of this product... and I believe them! Many of the places I go to purchase cards have sold through their initial stock of it, and ITG has stated that it has sold out of it on their end. The base cards look very nice and the game-used memorabilia cards are spectacular as always. If you're looking to try ITG for the first time I would say this is the product to do so. It's definitely one of my favorite ITG products that has come out recently. Get it while you can! This stuff might dry up quickly!