ITG fills the void in the hockey release schedule with their annual Heroes and Prospects set.  Collectors year in and year out look forward to this release to get their hands on some of the youngest and most promising hockey players.  This unique set showcases all types of hockey talent - from legendary to current, and to future. 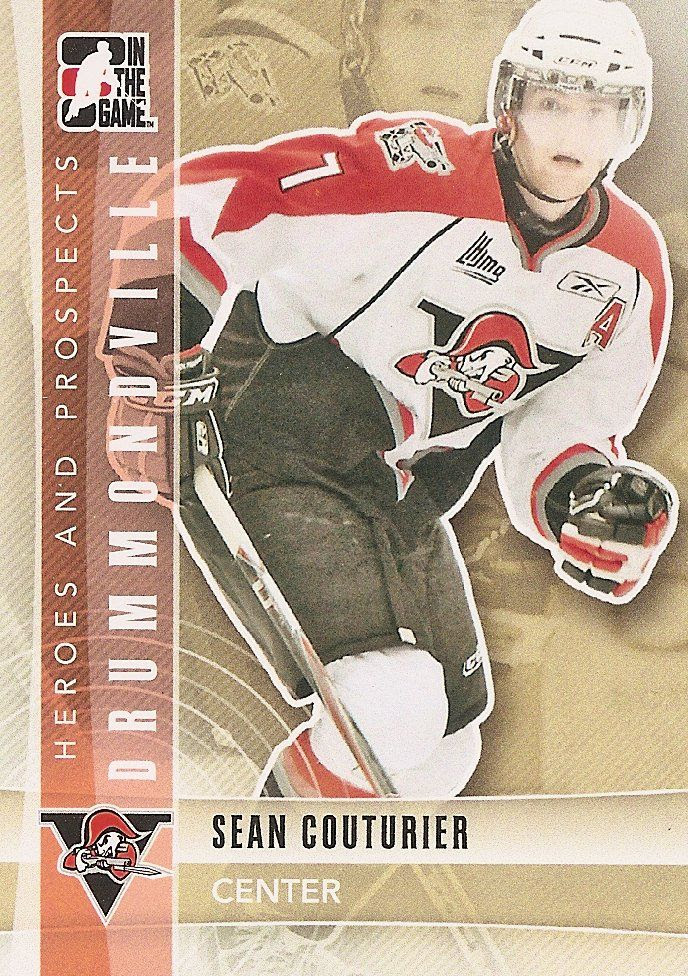 Base Card Design -
The Heroes and Prospects base card design comes in a few different variations. There are the standard base cards which feature players in their CHL or AHL teams, Grad cards which show current NHL stars in their pre-NHL jerseys, and Hockey Hero cards which showcase hockey legends. Even with the numerous variations, they all look pretty much the same and give off the same feel - which is good because they all make up the same base set. All the cards have nice close-up photos of the featured player. For the most part, all the players are in bold, full-color photography that helps them jump off the card. The only non-examples of these would be from the legend's cards. But even with those, the ones I received in my box looked well-done with a clear image. 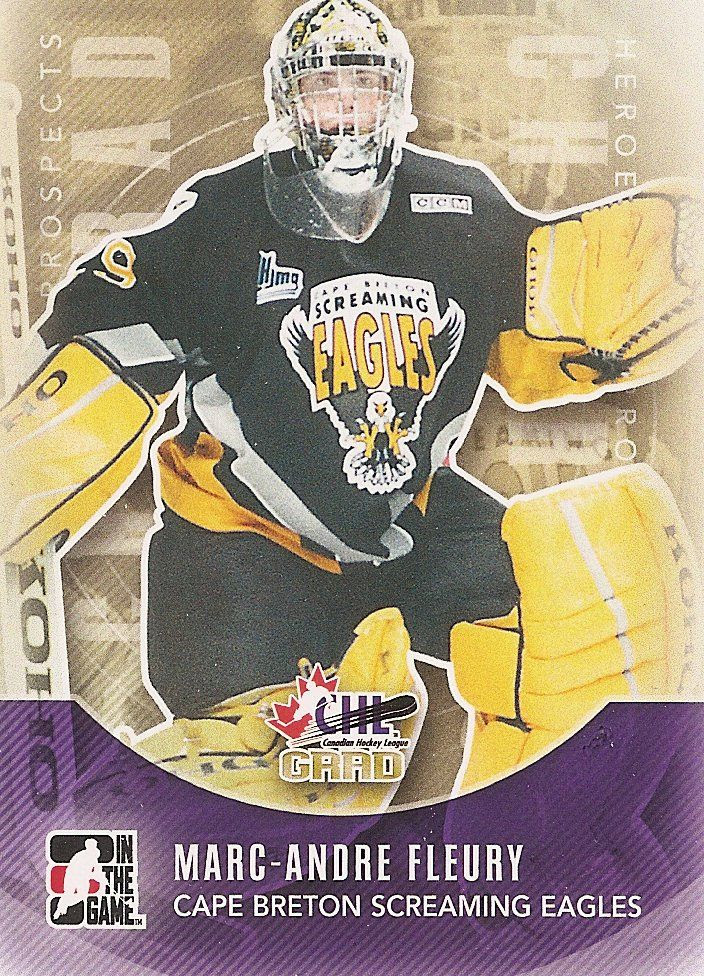 The predominant color of the H&P set is a faded gold. This background color permeates its way through the entire base set. Personally I think it's an odd color choice as it takes away slightly from the colorful player images.  It makes the cards look a little older and a little tarnished - the color just does not evoke anything modern. Here a better color choice would have been a very bright white background with grey overtones. I think that would have made the base cards really pop. But as it stands, the background color choice brings down the set slightly. The rest of the design works well.  ITG did a nice job incorporating the different team colors into the graphics. It's also fun to see the AHL and CHL logos featured on the cards. Many of these logos have a fun spirit to them that NHL logos sometimes can lack. 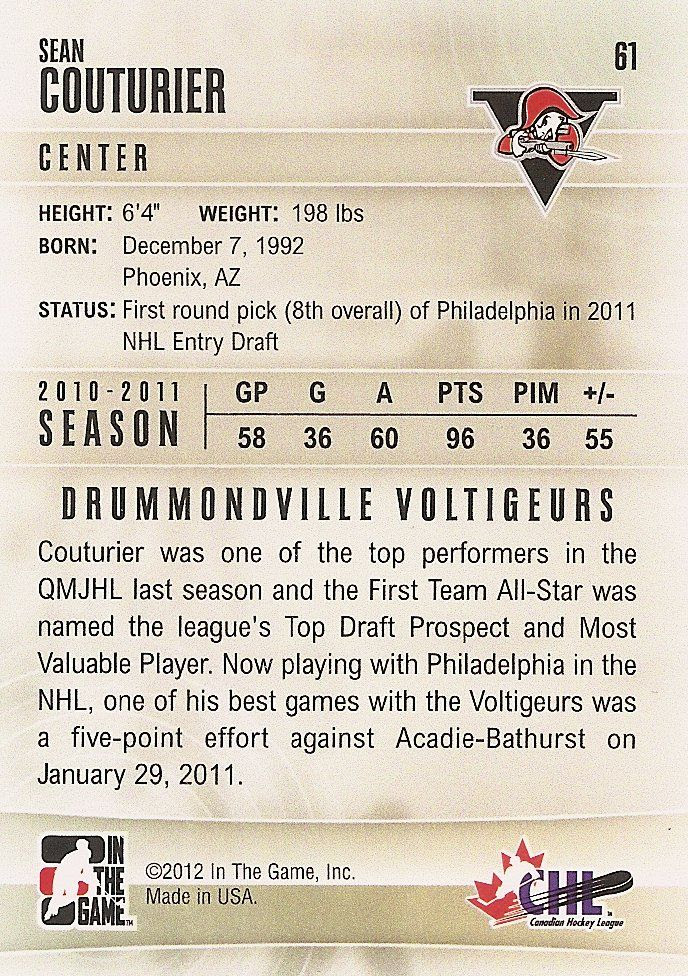 The back of the H&P cards are pretty standard fare. ITG does a very nice job of including a lot of information about the featured player. The information is laid out in a clean manner that is not confusing, and the space on the back is used well - nothing fancy, but a very functional card back. People who are stat completists may not appreciate only one line of statistics, but for most people like myself it's just fine. 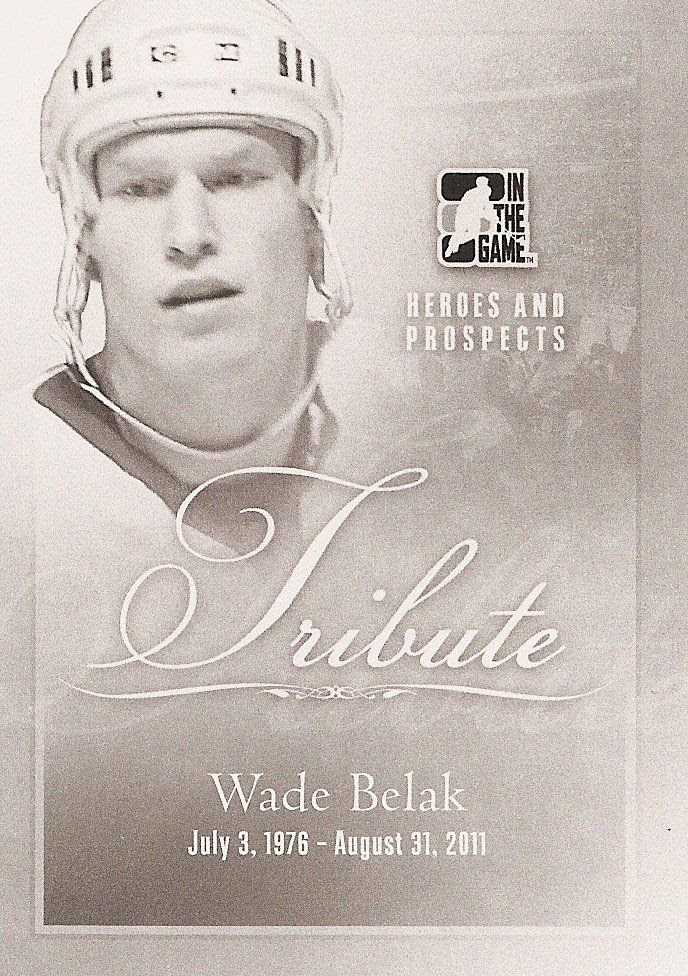 The last base cards in the set have been used to pay tribute to players who have past away recently. This Tribute subset is something pretty unique to hockey cards... and is something that could be pretty touchy... but ITG handled it well. The cards are clean and very well done. The front cards are very stark and simple with only black and white tones. It's not morbid or morose. They in fact are classy cards. The back of the card has a write up of the player and some of the positive aspects of their game. Nice job on these ITG! And you can find some that feature sticker autographs of the player.

Inserts/Game-Used/Autos -
On average a box of H&P will net you 4 memorabilia cards - usually 2 autographs and 2 game-used pieces. As usual the game-used cards from ITG are outstanding and feature satisfying chunks of game-worn material. ITG goes out of its way to tell collectors as specifically as they can where their piece of hockey history came from. 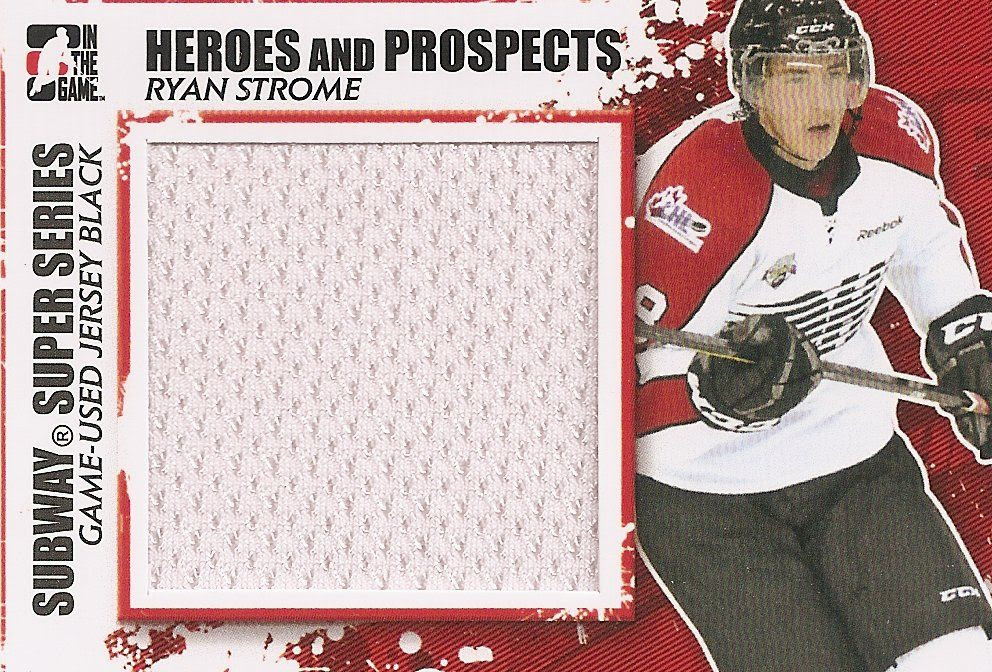 The Ryan Strome game-used jersey pieces shown above is a great example of the kind of memorabilia cards in H&P. As you can see the size of the jersey pieces is massive. I actually really enjoyed this card when pulling it. Everything about it just works. The red, white, and black color scheme makes the card look very bold and modern. It uses simple, bold colors, and clean graphics that don't get in the way and distract or look dated. This is definitely the way ITG should move in terms of their design. 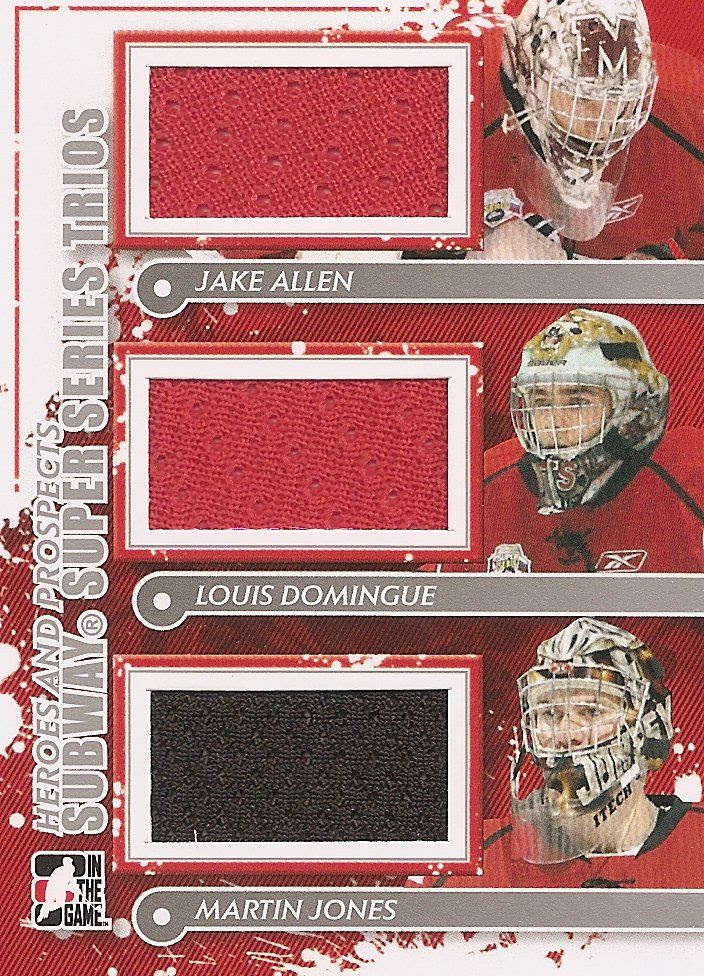 In the same vein is this triple jersey of Jake Allen, Louis Domingue, and Martin Jones. In terms of the card's look, it follows the previous card very well. I enjoy the color scheme and the size of the the three jersey pieces. They are the perfect size for being a three player piece. I do have a couple minor issues with this card that I think ITG could change easily. One is the lack of foil on card. This triple jersey is the silver version of the card. There are parts of the card that are in a flat silver color. Putting some shiny foil on the card (a la what UD does with Artifacts) would make the card really stand out. I'm not saying to make it tacky, but some restrained foil would look great on their gold and silver parallels. The second quibble I have is a common complaint with ITG's cards. The back of the card states that this is one of seventy cards produced. This is better than having to look online for a print run, but I know collectors would really appreciate true serial numbering on the cards like Panini and Upper Deck. 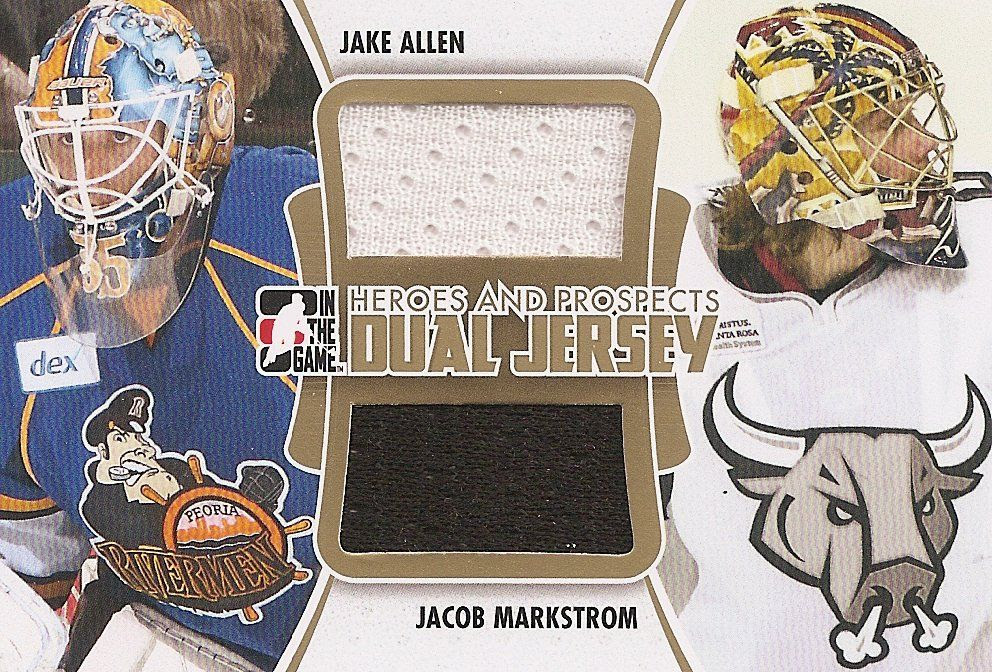 Here is a dual jersey insert card in horizontal format that I pulled. The jersey pieces are are about the same size as in the triple, but this card features larger photos of the players depicted. It's a nice card, but could be improved by the suggestions made with the triple jersey. In this case, it is a pretty rare card as it's the gold version limited to just 10 copies. 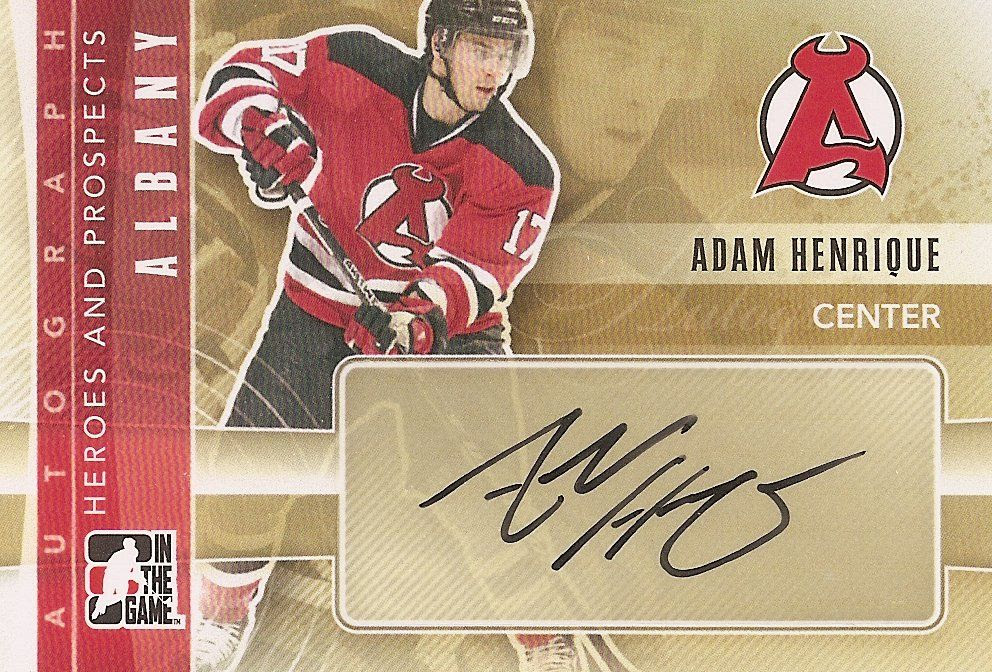 The standard autographed cards in H&P remind me a lot of autographed cards from other ITG sets.  They definitely look different than in year's past, but they retain the same feel. As usual ITG is very clever with their masking of sticker autos. The stickers are integrated very well and you can hardly tell that's what they are. Though I'm not a huge fan of the color scheme, it does match well with what ITG was going for with their base set. I always think it's nice when companies think along the lines of making their sets work well within themselves. 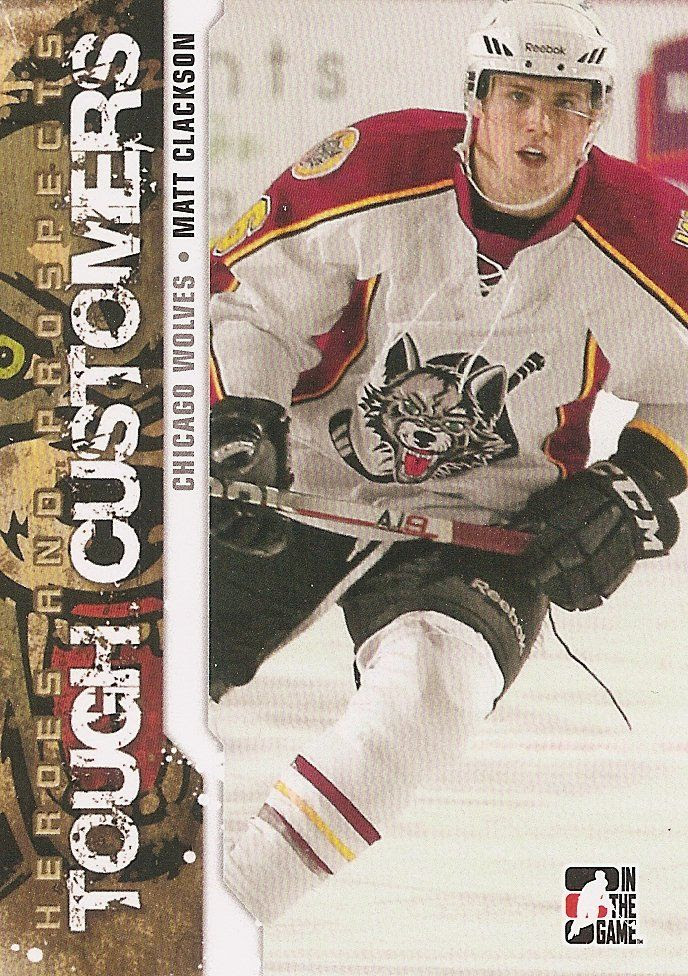 Lastly, inserted at about the same rates as the game-used and auto cards are standard insert cards. These cards are printed on the same card stock as the base cards - they just have a different design and come in themes. I am not a fan of these cards as they are boring to me. If I were to include inserts into a product, I would do something to make them collectible and stand out from a crowd. I truly believe that cards don't need to have autos or jerseys on them to be cool, but companies have to be creative. I would have loved to see ITG make some cool inserts that had some different innovation to them. Examples of innovation from other companies are the use of acetate, die-cutting, thicker card stock, special foiling techniques, and special textures. This is an aspect that ITG could explore more.

Overall Rating -
ITG Heroes and Prospects is a set you can't really go wrong buying. It comes at a price point ranging from $75-$90 dollars per box and you get 4-5 nice hits per box. The product is an excellent mix of very young talent, current talent, and legendary talent. With 18 packs per box, it's also a product that you can sit and enjoy opening - well, unless you're trying to get it all as fast as you can to cut down on Youtube video length.

I definitely recommend adding this product to your purchase list. Aside from just getting cards that might be good now, this product is especially good for pulling cards that might be very hot in the future. It's a product sort of similar to baseball's Bowman draft and prospect cards. Many of those cards may not be worth a lot currently, but there may be one or two in there that sky rockets later. And H&P has that same sort of potential. Except here, you also have a chance of getting some pretty darn good current players as well.

Heroes and Prospects is a solid buy and something I wouldn't hesitate getting and trying out. I'm surprised that this box is my first ever! It definitely won't be my last.

Here's a box of H&P I got from Dave and Adam's Card World: