Hear ye, hear ye!  Panini hath released it's most regal product of the year - Crown Royale!  Known for its grandiose flair and special crown die-cut tops, Crown Royale is certainly a uniquely different type of card product.  Last year's set was a very pleasant surprise - is this year's set still thee king of cards or has it stepped down from the throne?  We'll find out as I review this new release. 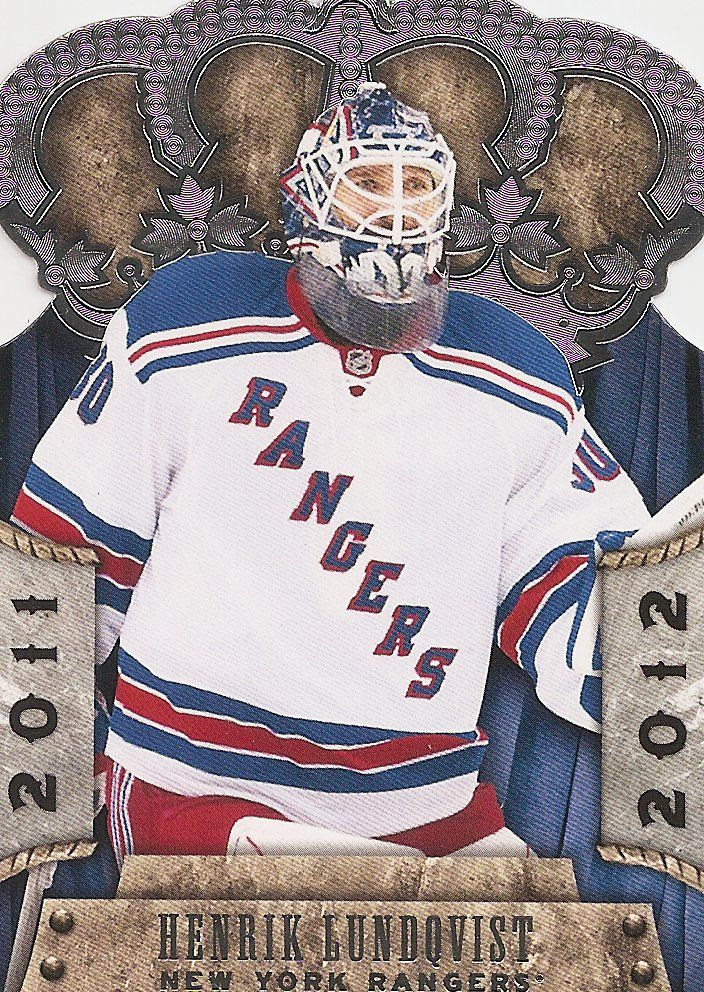 Base Card Design -
The Crown Royale base cards are a spectacular example of a great original idea that has pretty much stood the test of time.  The original Crown Royale cards came out in the 90's with crown die-cuts, and still these cards appeal to collectors nearly 20 years later.  Obviously there is not a real tangible connection between ice-hockey or sports and the crown/royalty theme the set has, but for whatever reason, it just works... and it works well.  The base cards feature two elements that make these cards stand out.  The first is obviously the foil crown that adorns the top of the card.  There are generous amounts of foil used, and not just a flat layering of foil, but a textured foil that gives the crown a more three-dimensional feel.  The next feature is the large, up-close photo of the player.  The player image is very large, and in bold, bright color.  Each player looks as if they are jumping right off the card.  One other element of the card worth mentioning is the velvety background.  I love how it subtly displays the team's color.  Nice touch.

There is not a lot of negative to say about the base card - just a couple of nit-pics.  One is that the foil showing the player's name and team can be difficult to see in darker lighting because it blends in with the marble background.  The other is the large '2011-2012' dates on the sides of the card.  In scans these looked pretty hideous, but in person they're not as bad... still a bit too large for my taste. 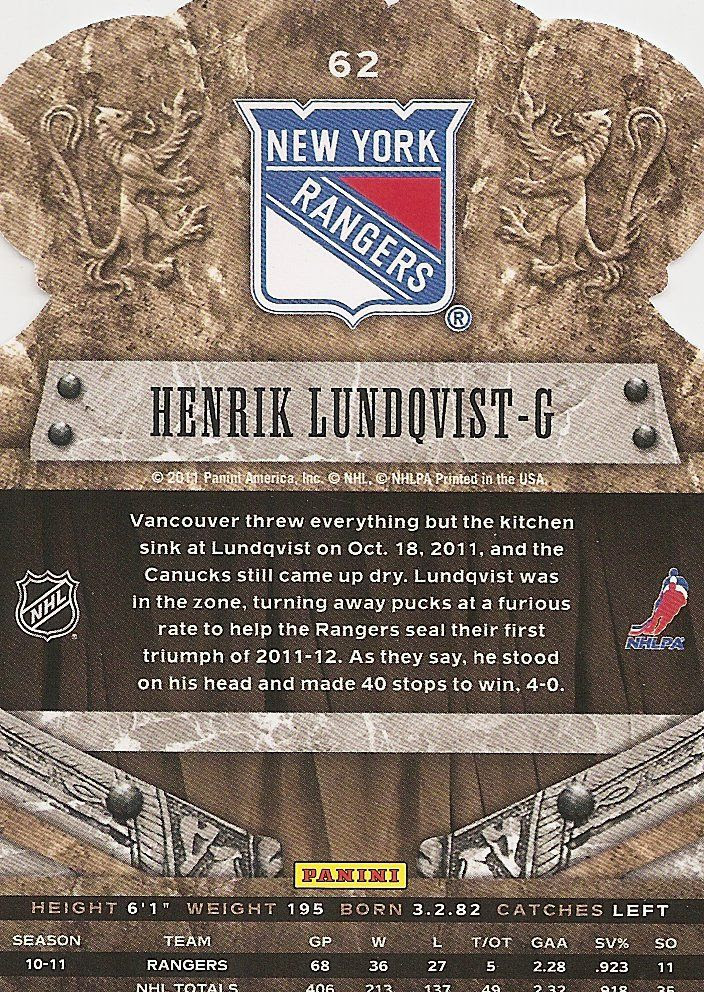 The back of the base cards look appropriate for what they are.  The graphics follow the same themes as the front of the card.  The backs give collector's a paragraph of information to read about the player and show the player's 10/11 stats. 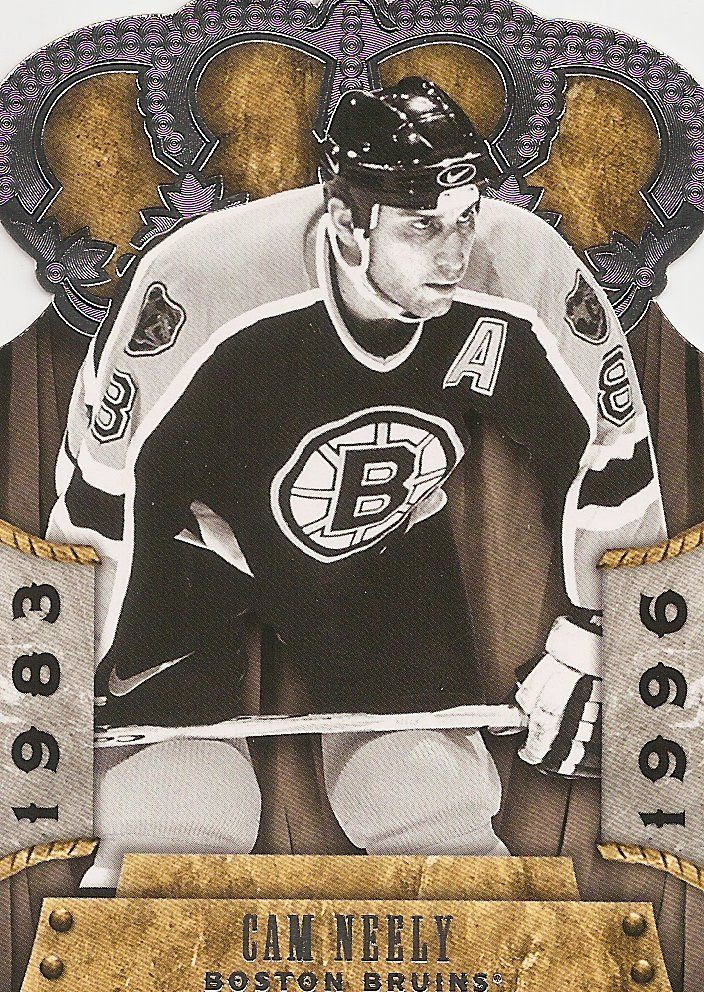 As with many other Panini products, the company pays tribute to some former NHL greats by adding them to their own subset.  These cards are identical to the standard base cards except in a couple areas.  The most obvious is the use of a black and white photo of the player.  The second is in the large dates on the side fo the card.  Instead of showing the current 11/12 release year, the dates have been changed to show the span of year's that the legend played from. 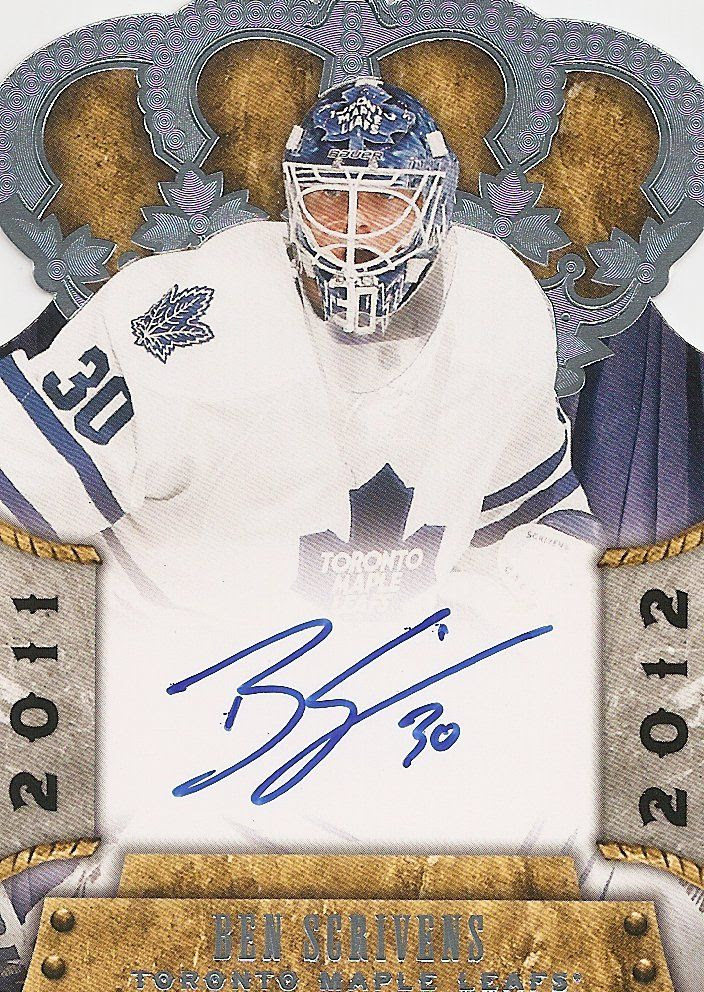 Rookie cards make their way into the main set of Crown Royale in three tiers.  The first tier is the standard Rookie Royalty card.  These cards have only one difference between them and the standard base card - the foil.  Instead of silver foil, the rookies get a light blue foil.  The next tier of rookie card are the Rookie Royalty Signature cards.  These cards feature an on-card signature of the rookie.  Surprisingly, neither the Rookie Royalty nor the Rookie Royalty Signatures have serial numbering.  The only numbered cards you will find in the main set are the fabulous Rookie Silhouettes Signature Prime Materials cards.  Each of those features a die-cut of the rookie over a large piece of the player's jersey.  These cards are numbered to 99.  They were a huge hit last year and should be again this year.  Some have had complaints that parts of the game-used piece is covered up by the player die-cut, but that hasn't affected most collector's enjoyment of the card.

Inserts/Game-Used/Autos -
Each box of Crown Royale comes with four packs.  In each of the four packs collectors can find one memorabilia or autograph.  Though in some breaks I've seen a few packs that had two hits in them.... lucky!  On average though, collectors can expect to receive about 2 autos and 2 game-used cards per box. 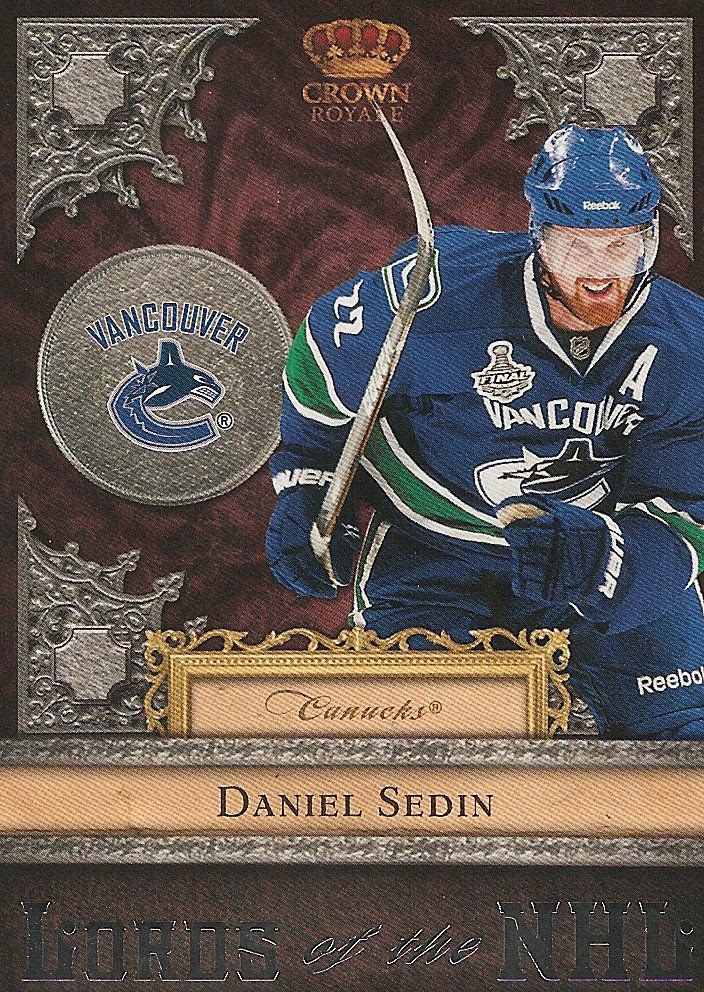 All of the inserts in Crown Royale will have some sort of royally themed design.  The Lords of the NHL card of Daniel Sedin shown above is very typical of what you'll get.  Everything about the card design is based on medieval concepts - all the way from the ornate graphics to the fonts used on the card.  Everything about these cards is over-the-top, but in a very good way.  The designers at Panini just went all out and it worked out beautifully. 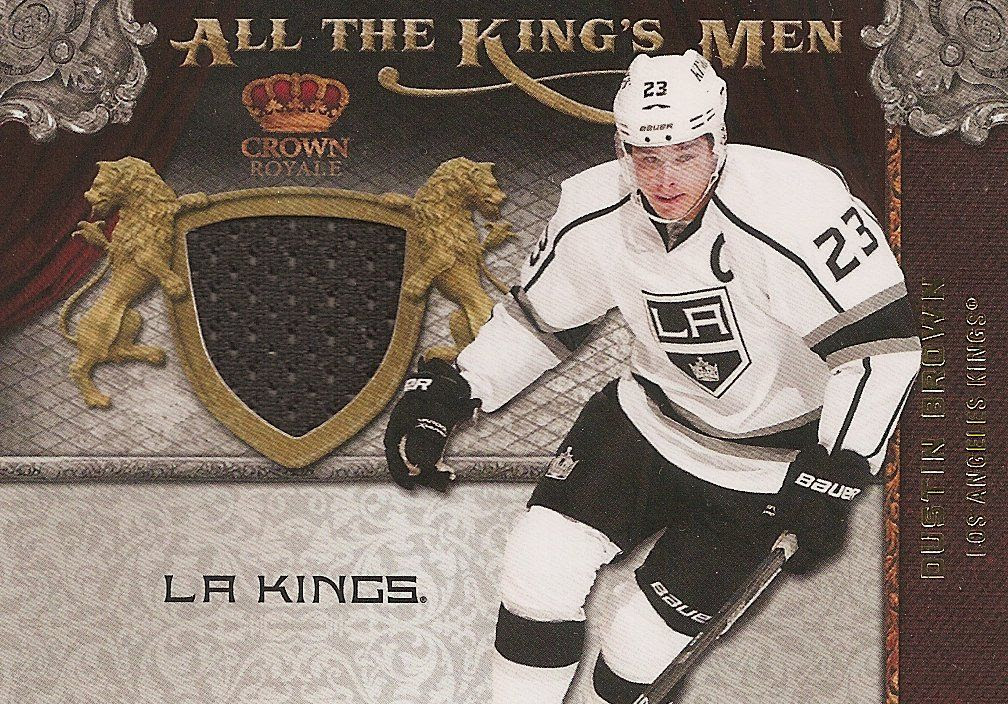 Many of the game-used cards found in Crown Royale will feature single jersey swatches.  This All the King's Men card gives you the single swatch in the shape of a shield.  Having unique shapes is nice, but it doesn't make up for the fact that the jersey piece is so small.  For such an expensive product, it would have been nice to have a more premium sized chunk of jersey.  I guess in this kingdom, the king was a little thrifty. 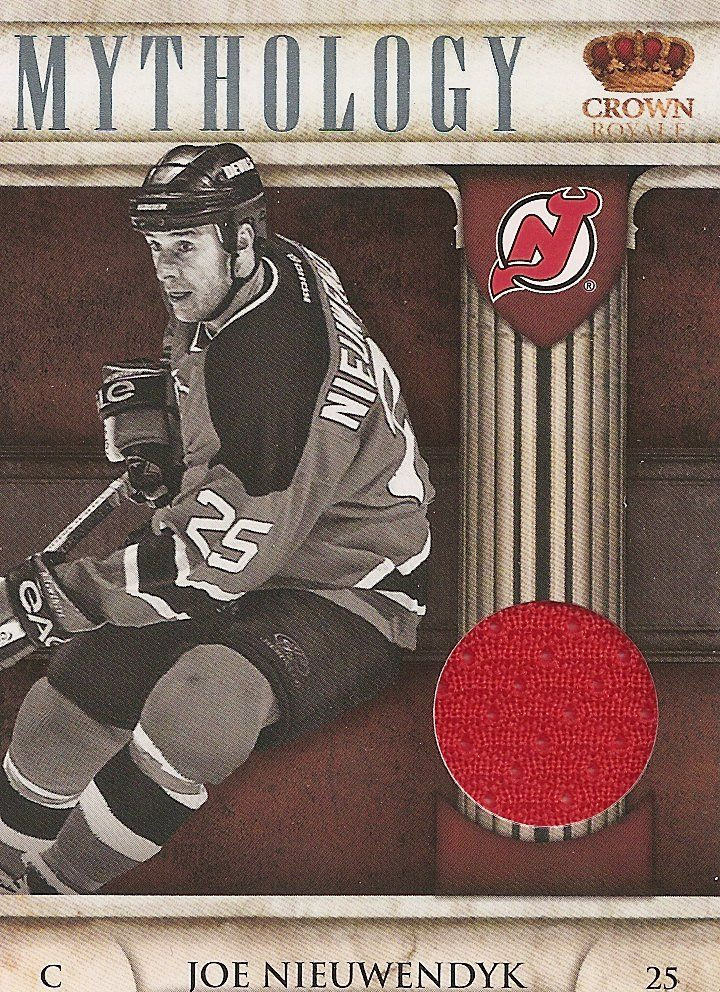 Above is another example of a small jersey swatch on the card.  This time though, the design element matches my feeling on the small jersey piece.  In the All the King's Men insert, the shield shape made sense and looked pretty good.  In this case the jersey floating in the middle of the card doesn't make a whole of design sense.  It feels as if there just needed to be a spot for a value-added component (the jersey) so they just put it there with little to no thought.

Both jersey cards shown above do not feature any serial numbering. 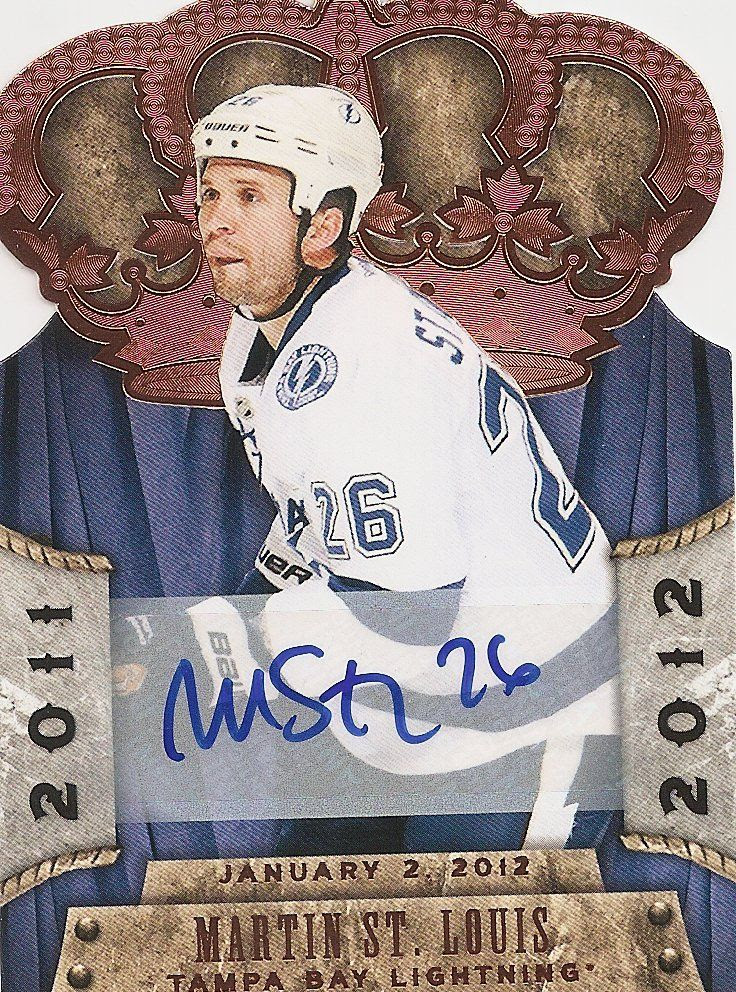 Some of the autographed inserts you can find in Crown Royale this year are the Scratching the Surface cards (cards that feature the signature of the player on a faux ice rink), Voices of the Game (autographs of famous hockey broadcasters), insert set auto parallels, and Premier Date base card autographs.  The Premier Date autograph of Martin St. Louis shown above is a sticker autograph numbered to 99.  In the box I opened at my local hobby store it was the only serial numbered card I received. 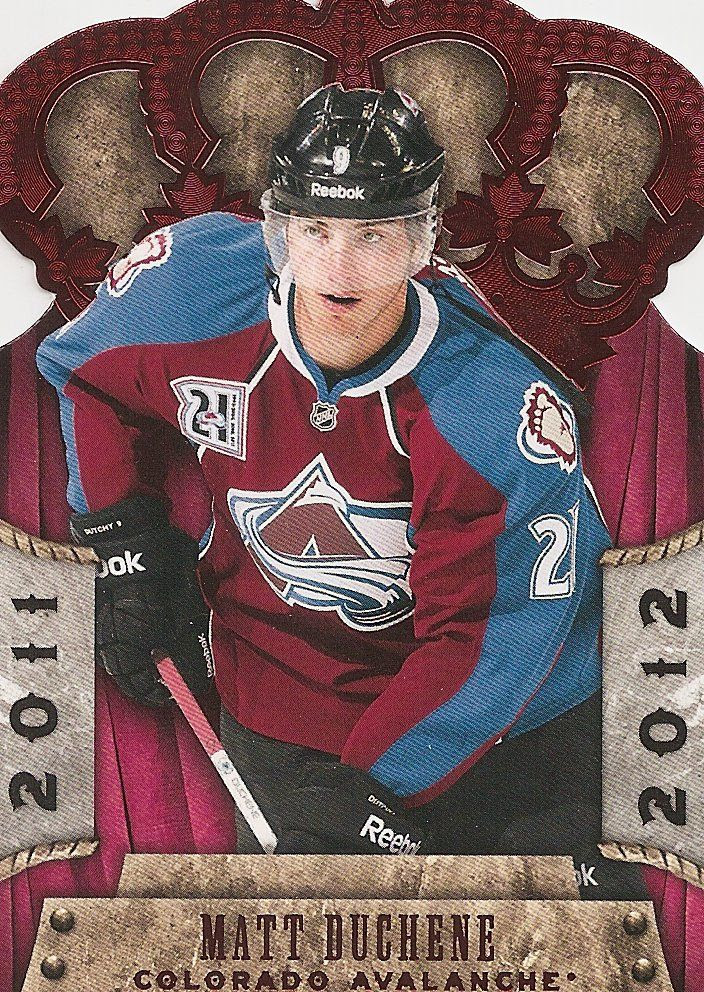 Panini decided to cut down heavily on the number of parallel cards offered this year within Crown Royale.  This year the only parallel (besides auto parallels) to find are the red foil versions of the base cards.  The red foiling looks great on the card, but unfortunately none of these cards are numbered.

You can find other unique inserts sets within Crown Royale such as the hard-to-get Crown Jewels, non-rookie Silhouette Signatures, and recurring Private Signings cards.

Overall Rating -
Crown Royale is a very likable product.  It's quirkiness is what makes it so great.  The design of the product is very fun and there is absolutely nothing else like it in the hockey card market.

Would I recommend this product?  Well, I would have to say... maybe.  It really depends on what you are after when making this purchase.  For those who love unique cards, this is a definite buy.  For those looking to flip cards for sale, I would stay away.  Many of the boxes I've seen opened do not yield anything close to the original purchase price.  So many boxes opened were a few (scrub) rookie autographs and a couple jersey cards.  If you just want the big prize of the Silhouette, be prepared to make a pretty big gamble.  Seeing as there are 12 boxes per case, hitting the Silhouette in one or two or even three boxes is a pretty tough proposition.

That being said, Crown Royale is still a very solid product for collectors who want to add cool looking cards to their collections.  I would definitely try a few boxes to see if I could hit a Silhouette, but not put too much more into it after that.