Upper Deck has released the venerable Black Diamond set.  This staple of the Upper Deck line up has been around for well over a decade.  Has Upper Deck found a way to make this year's version different from the previous years, or is it the same old same old?  Let's find out by breaking open a couple hobby boxes 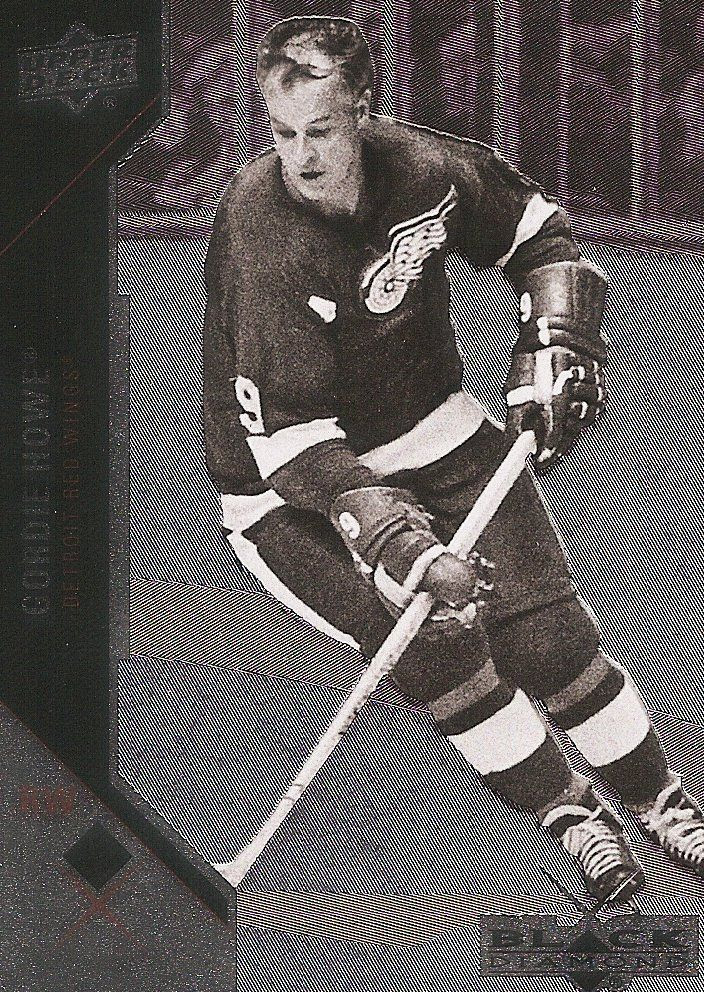 Base Card Design -
I mentioned to the local card shop owner that once you've seen a Black Diamond base card, you've pretty much seen them all.  Each and every year Black Diamond cards come to us with a thin (in a good way) all-foil hockey card.  Well, I can't say 'all foil'.  The player on the front is not covered in foil - which is a good thing, and a smart choice by Upper Deck because having the player without foil helps the featured player stand out from the foiled background.  This is unlike the Pinnacle Nufex cards that completely cover the card in shiny foil.  It's interesting to compare the two foil cards from the two companies side to side.  I actually prefer the Upper Deck card because the player is more prominently featured on the front of the card - it's less muddled.  But anyways, getting back on track...  As I was saying before, once you've seen a Black Diamond card you've pretty much seem them all.  They all have the same feel and look to them.  If you were to put all the Black Diamond base cards from all the years together and mix them up, I am sure collectors would have a difficult time figuring out which cards were from which year based on just the design.  Not that the cards don't have differing designs from year to year, it's just that they all look very similar to each other.  That being said, this year's design is quite nice.  The card has a very modern look.  I like how Upper Deck has chosen to use red, black, and silver as the main color scheme on the side border. 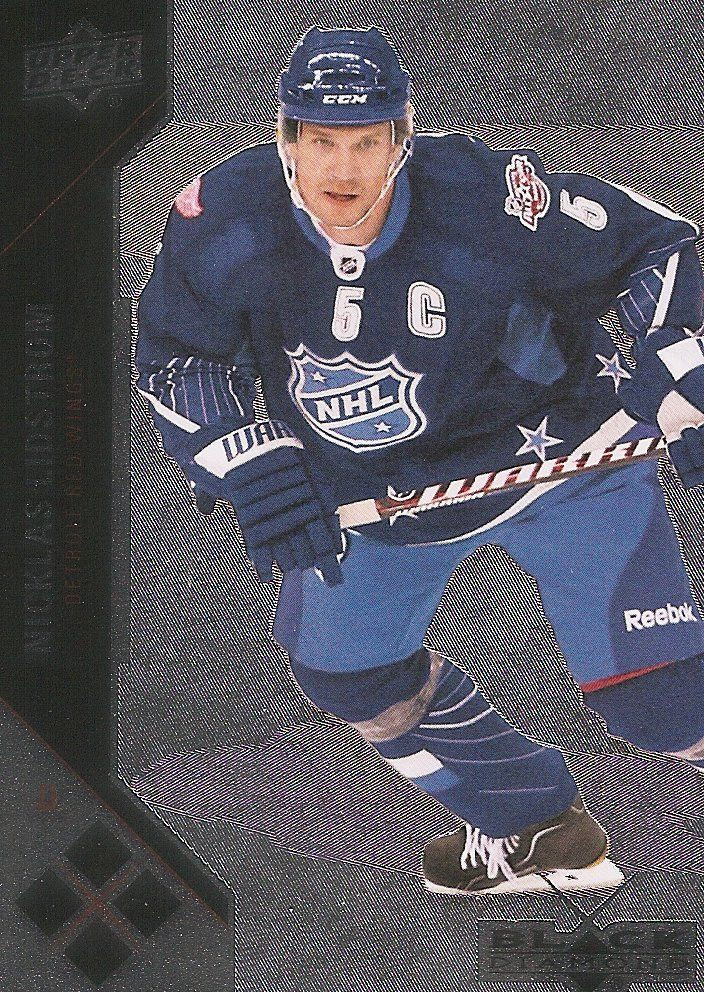 As per usual, Black Diamond comes in different tiers of rarity.  The single diamond cards are the basic card.  There are also double, triple, and quad diamonds to be found in boxes as well.  One significant change in this year's set is the way Upper Deck has included the star players in the tiered system.  In previous years UD had chosen to have minor stars as single diamonds and progressed upwards in star power as the diamonds increased.  Not so this year.  You can find mega stars of the NHL as single diamonds.  There are players like Sidney Crosby, Gordie Howe, Bobby Orr, and Wayne Gretzky in the single diamond tier.  It's nice that for this year, many of the big names are easily attainable.  The quad diamond cards actually also contain some of the major stars from the single diamond tier except they are featured in All Star jersey's.  So the quad diamond set of the stars is more of an All-Star subset.  Definitely an interesting and different idea from the minds at UD. 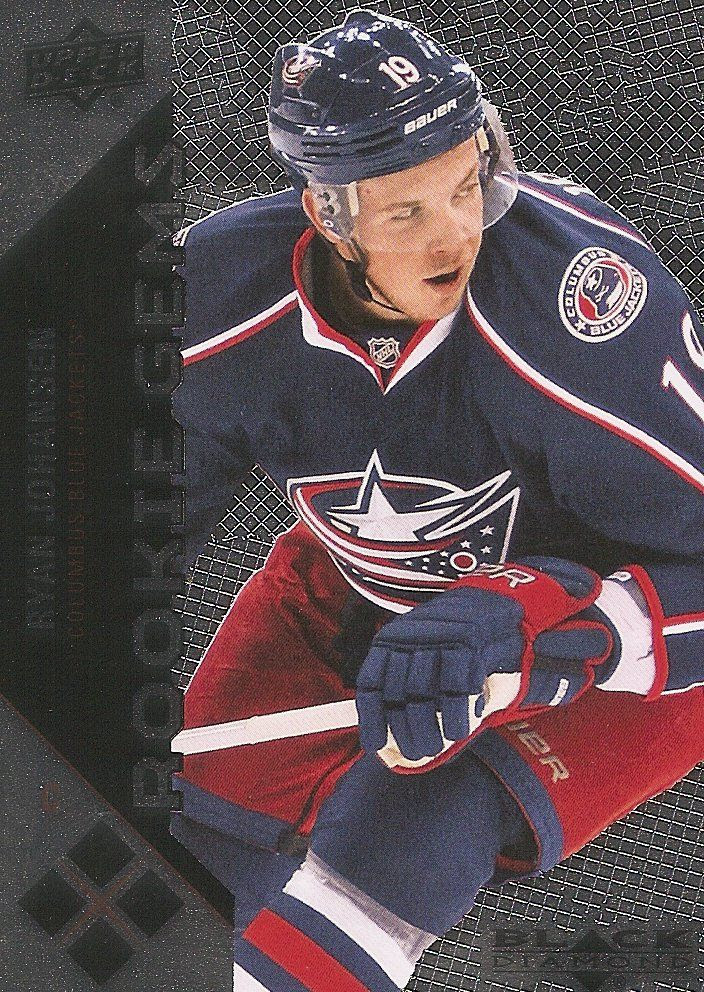 Rookies come in two different tiers: triple diamond and quad diamond.  You'll get a few triple diamond rookies per box and usually one quad diamond per box.  Both of the rookie cards look exactly the same save for the number of diamonds shown on the bottom left hand corner.  The rookie cards share similarities to the basic card except in two areas.  The first is the larger side border.  These cards have 'Rookie Gems' in rather large font.  It looks great, especially with the rookie photo.  Notice that the rookie photos are much larger and up-close than the standard cards.  Upper Deck has subtly made the rookies a bit more prominent on the card.  Very cool.  The second area of difference is the background texture.  The backgrounds of the rookie cards are much more textured than on the standard card.  Again, this makes the cards feel more 'weighty' and more important.  And of course they are - these are rookie cards for goodness sakes! 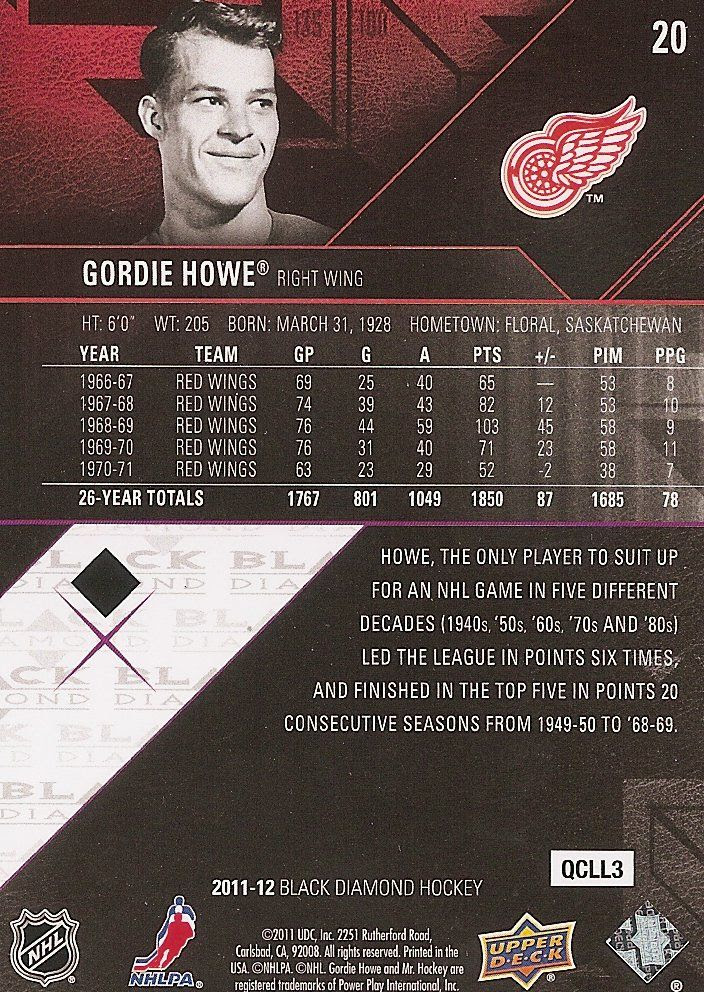 The back of the Black Diamond card is nicely done as you can see above.  It's a very modern back that features a nice head shot of the player.  All the basic information and stats are there along with a little write-up.  All the lines zipping around on the back of the card remind me of the movie Tron.  I can imagine zooming into the card and seeing those light bikes from Tron creating those lines on the card.  Ok I'll stop with the nerd moment now.  It is a very sweet looking card back.

Inserts/Game-Used/Autos -
One of my favorite things about Black Diamond is that it contains not only the standard autographs and game-used cards, it carries hard to pull great looking insert cards.  As a hobbyist who collected a lot in the 90's, I was used to seeing insert sets with a lot of thought put into them.  Back then companies would do all sorts of things to make their best inserts stand out.  The hardest to pull inserts always looked the coolest and were the most desired.  Black Diamond has very cool inserts.  This year they have acetate Championship Ring, Hardware Heroes as well as the Lustrous Rookies inserts. 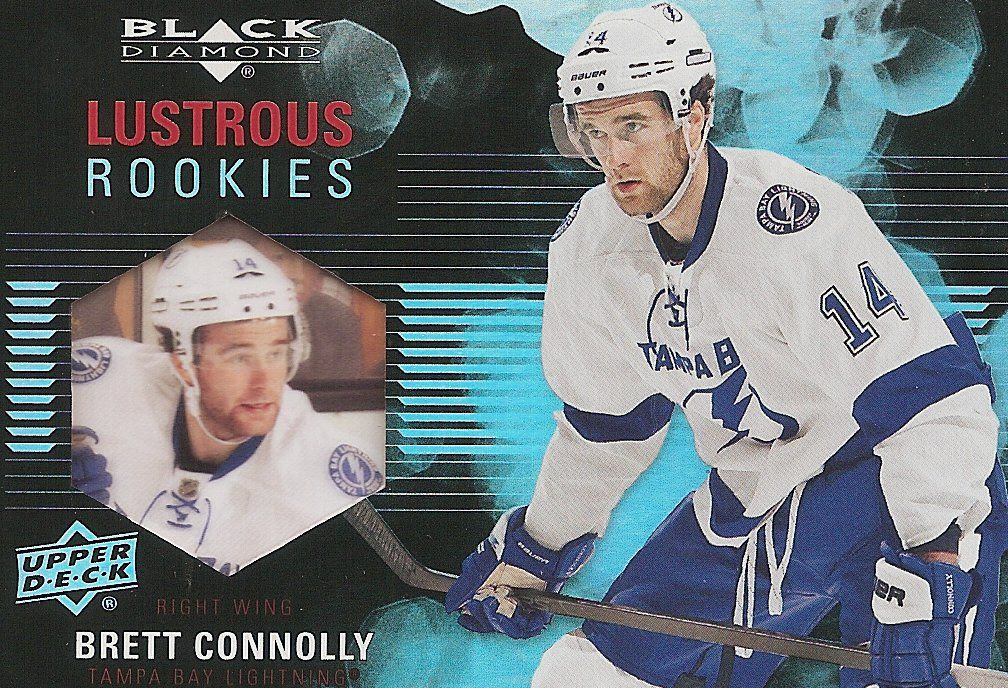 Though these cards don't have an autograph of memorabilia piece, I have found that collectors still covet these beautiful cards.  You can't really tell in the image above, but the Connolly Lustrous Rookies insert is on foil board and the smaller picture is of clear acetate - a stunning card to see in person. 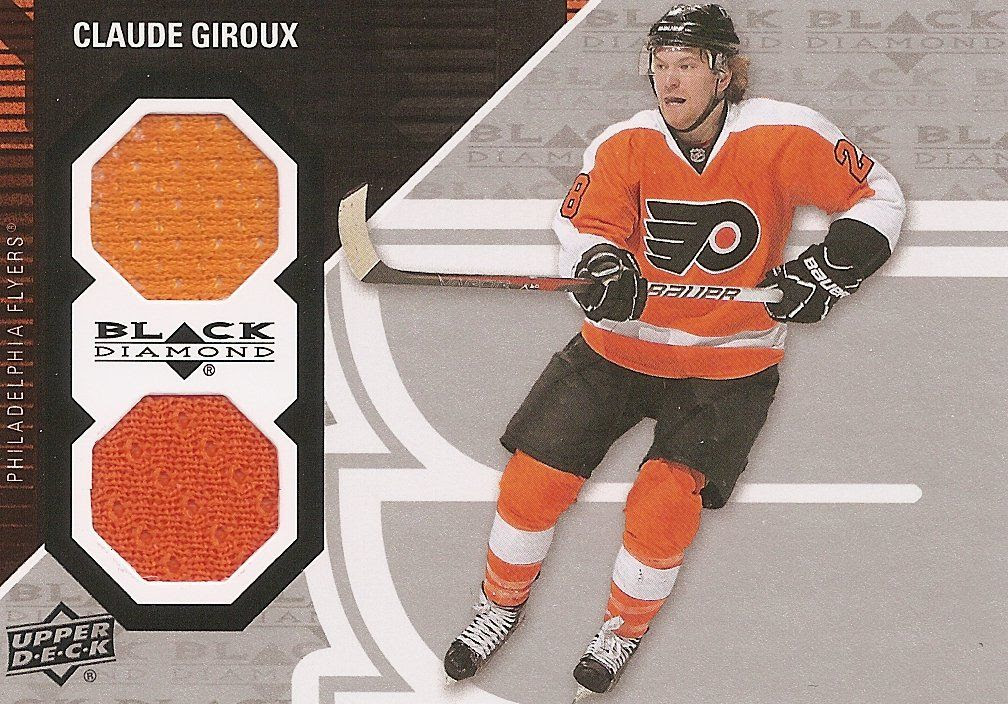 Game jersey cards make their return to Black Diamond this year with a twist.  The game-used cards come in team sets of 4.  You can put the 4 cards together like a mini puzzle and create a large image of the teams logo.  On the Giroux above you can tell that it's the upper left hand part of the puzzle.  Definitely a neat idea here - nothing mind blowing - but just a simple and fun little thing that adds some charm to the set.  One thing collectors may notice is that the standard jersey card is down to 2 jersey pieces rather than 4.  Is this a big deal?  I don't think so, but maybe it may matter to some. 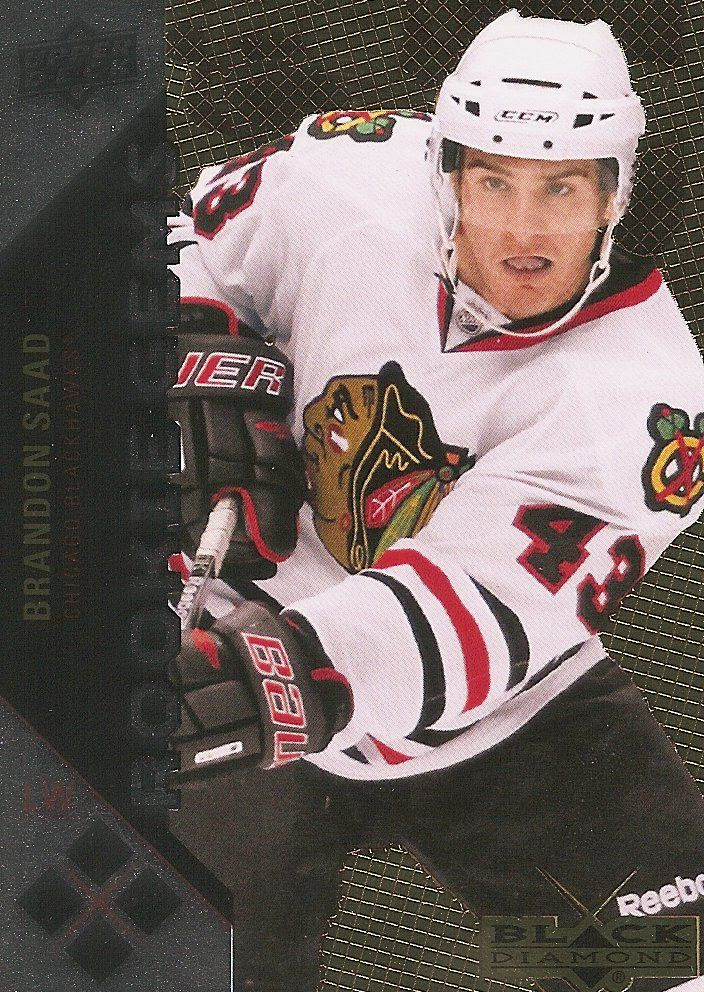 It may be difficult to from the scan above, but the Brandon Saad rookie card is a gold version limited to just 10.  Yes, there are the standard ruby (/100), gold (/10, and onyx (/1) parallel cards to chase down in this set.  You may also find parallel autographed versions of the jersey cards as well.  They are extremely limited as their print run goes to just 5.  Besides the 1/1 onyx cards, it's nice to have just a few parallel cards that are relatively easily attained. 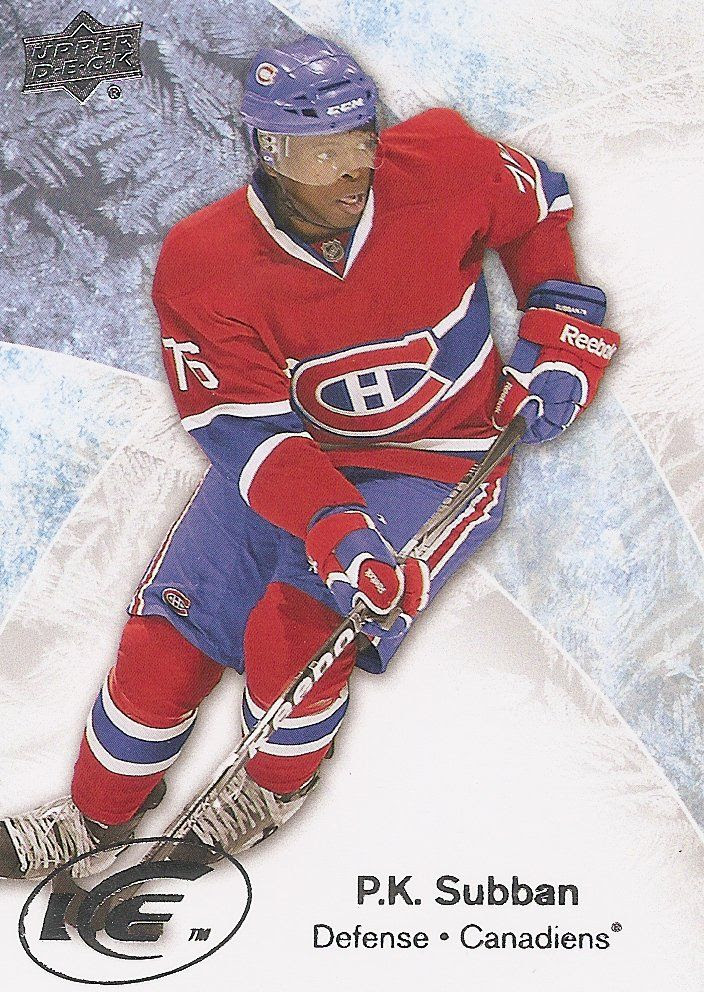 UD Ice is once again back in Black Diamond!  Every box of Black Diamond will contain one bonus pack of UD Ice.  I have to say that Ice is like the opposite of Black Diamond.  The cards a are very bright and feature just a touch of foil highlighting.  The Ice cards look great this year and are a perfect compliment to the Black Diamond cards.   Many collectors have missed Ice as a stand alone product, but at least it is not gone forever. 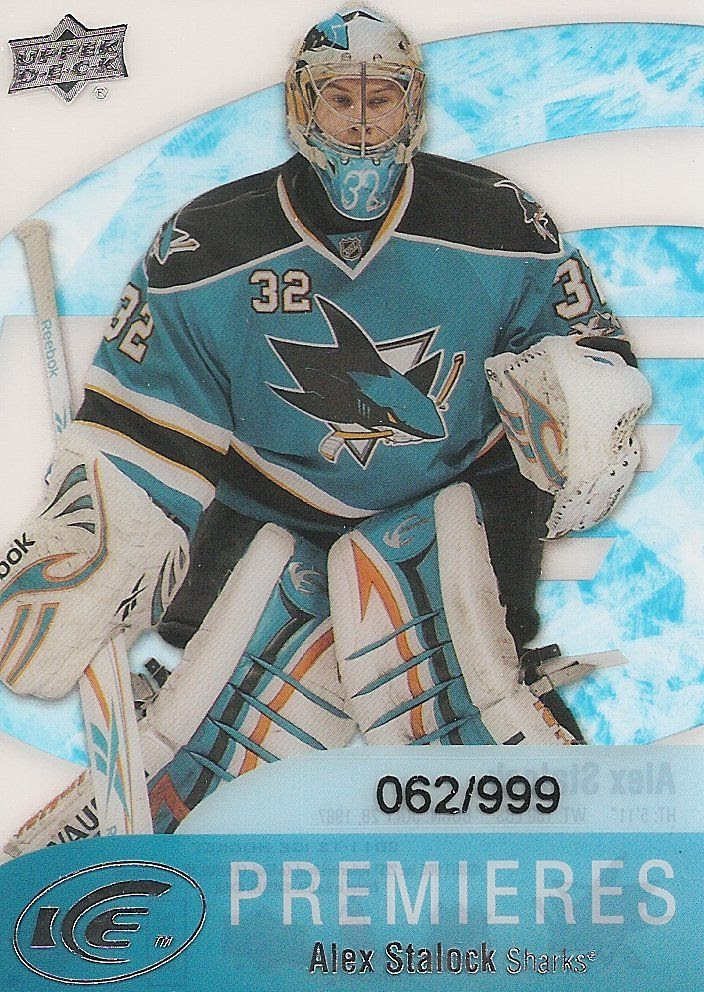 Of course the main draw of the Ice bonus pack will be for the Ice Premier rookie cards.  Everyone and their grandmother will be tracking down the Ryan Nugent-Hopkins/99.  That card will be worth a great deal of green.  But besides the value of the cards, the design of the cards are spectacular.  I think one of the reasons why these cards remain so valued and collected is because of the way they look.  These cards are slickly designed and attractive.  It's a perfect rookie card without any need for autograph or memorabilia.

Gemography cards and other unannounced insert cards can be found in Black Diamond this year as well.

Overall Rating -
All in all I think I like Black Diamond better than I did last year.  Upper Deck has tweaked the product in some fun ways and has made it a more interesting break.  At 24 packs per box, it can be difficult to pull out nice hits just by buying packs so I recommend buying Black Diamond by the box.  And also purchasing by the box is the only way to get your hands on the Ice bonus pack and your chance at an Ice Premier rookie card.  To be honest, I think for some the Ice bonus pack will be the main temptation to purchase a box of Black Diamond.  The other stuff that comes in the box will be just gravy.  But I would caution discounting the things you can get in Black Diamond this year.  There are some beautiful cards that would be great additions to any collection.  So all in all, I'd so go get a box or two or three.  That's a pretty good dip into Black Diamond this season.

Here's one of my Black Diamond breaks: