Panini releases it's first higher-end product of the year with 11/12 Limited Hockey.  You get one pack of cards in a small box.  Is it worth the price?  Let's find out! 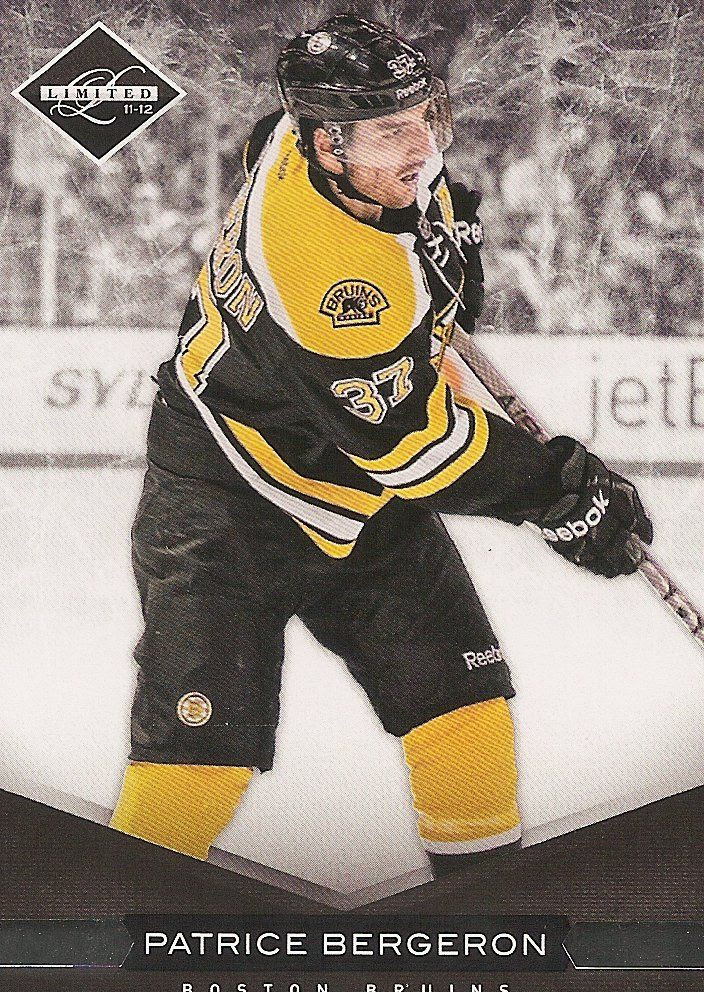 Base Card Design -
This year's limited base card surprised me greatly - they were not what I expected them to be at all.  For those who haven't seen Limited before, the base cards are traditionally on very shiny foil board similar to that of Certified.  This year's Limited hockey base are not.  They are on a standard, thin glossy card stock with a few touches of foiling near the bottom of the card.  The cards look nice, but I would think for the price paid for them, a foil board treatment would have been appropriate so that collectors would feel they got a more premium card for their money.

That being said, Panini has come out with a very pleasing base card design.  The base cards have a mature look to them.  In a way, they remind me of last year's UD Ultimate Collection.  The players are in full color while the background of the card is in shades of black, white, and grey.  Having the players in color in contrast to the background really help make for a stunning looking card.  Other smart design choices are notable as well.  The bottom border of the card features the player's name and team.  This portion of the card utilizes nice, clean lines and thin, modern font.  I appreciate the small amount of foil around the name to highlight it.  Panini shows a lot of restraint here.  It's very nice and subtle, not guady or overdone - like I said earlier - it's mature looking.

The upper portion of the card features the Limited logo as well as a 'fade to ice' backdrop.  The Limited logo looks very classy, but as it stands, is very flat on the card.  I've mentioned it before for other Panini products but I'll mention it again... putting foil on the logo would really class up the card.  They have already put a bit of foil on the bottom of the card so I would think it wouldn't be too much to do the same with the logo.

Finishing off the top portion of the card is an interesting 'fade to ice' look.  I'm not sure if this was purposeful, but it is the same design choice they used with Certified this year.  It's certainly not a bad thing, it looks great, but I just wonder if it was a purposeful tie to their other brand or just a coincidence. 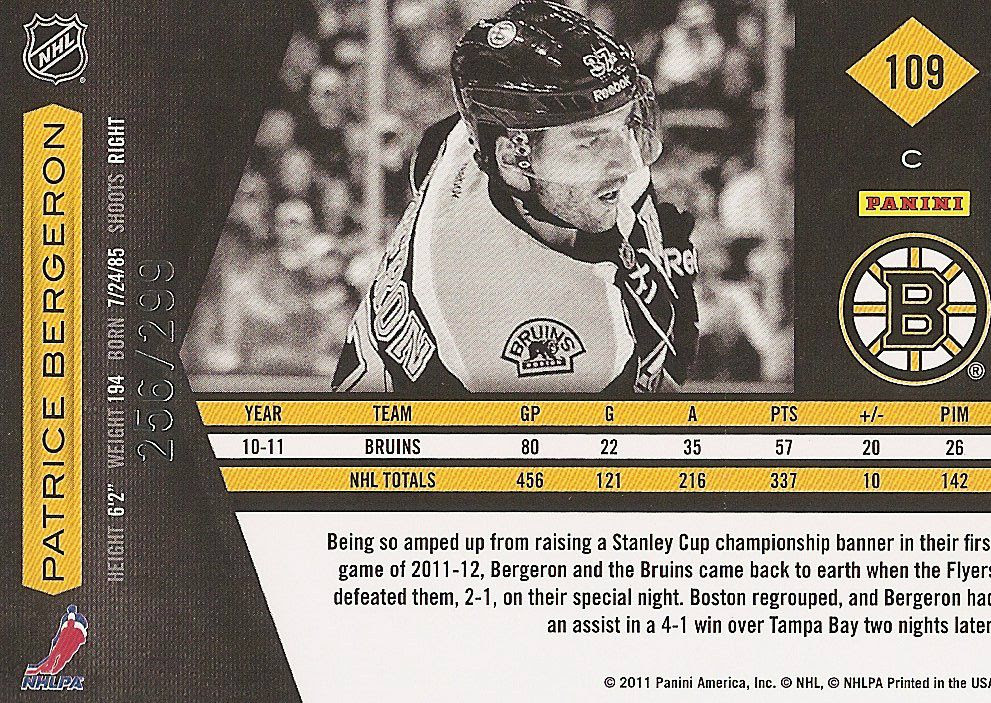 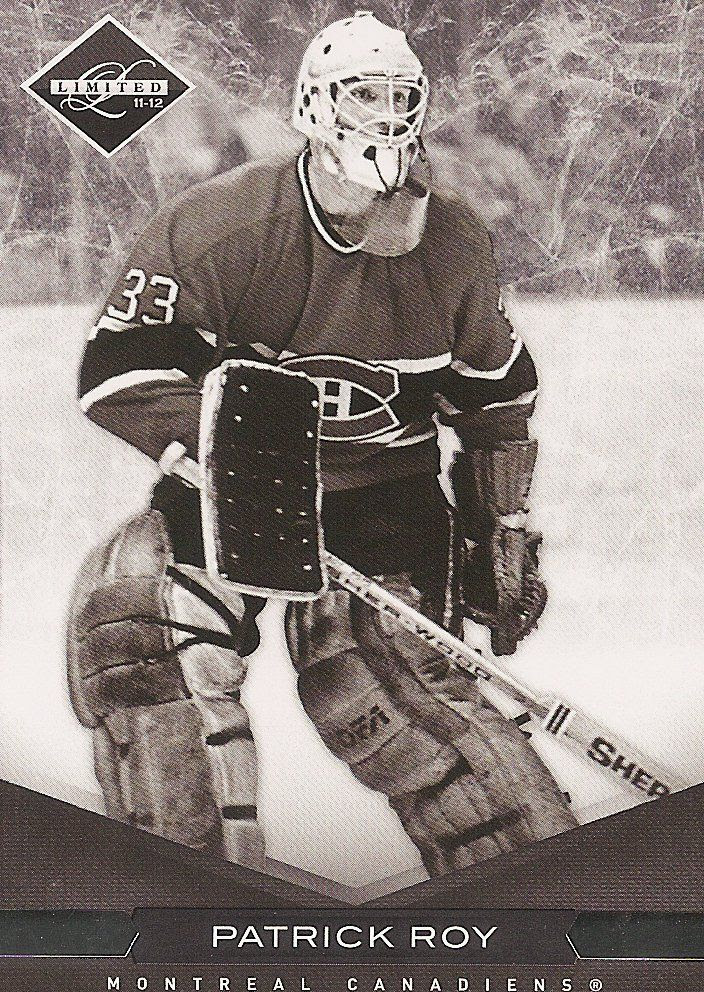 As with previous Limited releases, Panini has chosen to include retired players as a part of the base set.  Usually these cards are featured after the current players, but this year they take up the first portion of the set - cards numbered 1 through 50.  These cards share the exact same design as the standard base cards except that the players are in black and white rather than in color.  I can understand the choice to do this, but I personally would rather have the player in color.  As they are, the players and the backgrounds blend too much for my liking. 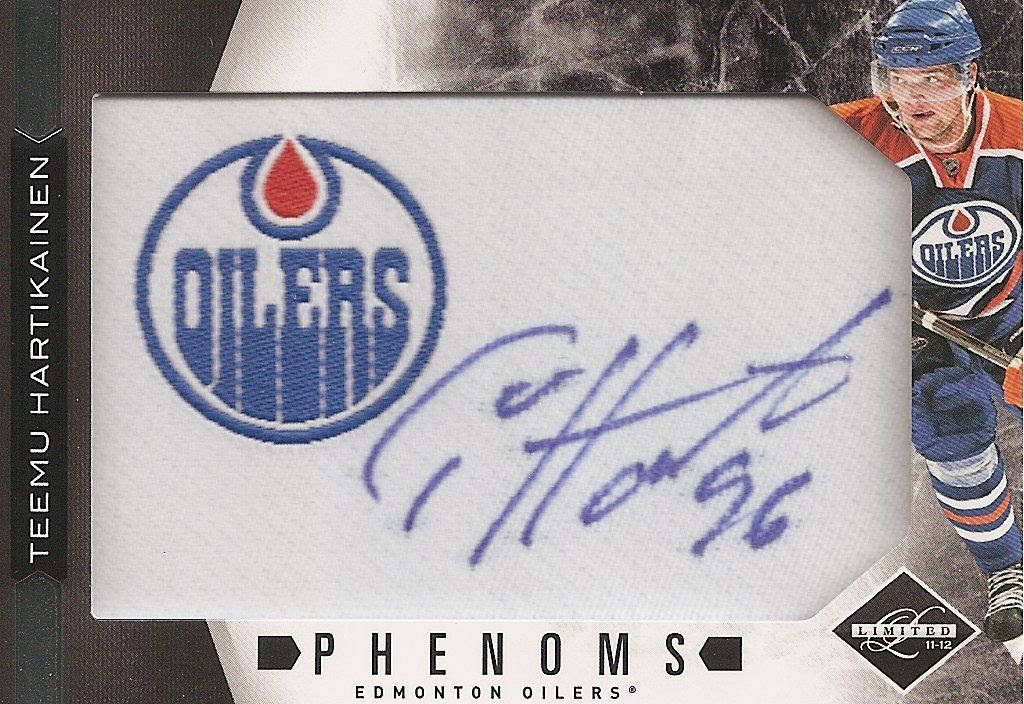 Phenoms rookie cards make a return to this year to finish off the main set of cards.  Like last year, Panini has manufactured a patch of cloth with a logo on it for the player to sign.  I've noticed that this type of card is a favorite among the designers at Panini.  In football products, they have players sign a leather type material.  In basketball they have team logo cards as well.  Though this year's Phenom cards look better than last years, I am just not a huge fan of them.  It's hard for me to find a reason for the cloth inclusion.  Since the piece of cloth was not worn by the player or used at an event, it simply doesn't have any meaningful place in my opinion.  The cloth doesn't even represent any facet of the game aside from the logo being on it.  I would be fine with the players simply signing on the card and be done with it - leave the extra cloth for the clothing manufacturers!


Inserts/Game-Used/Autos -
Each pack/box of Limited will come with three autographs and/or memorabilia cards.  Along with the base cards, you may also pull themed insert cards. 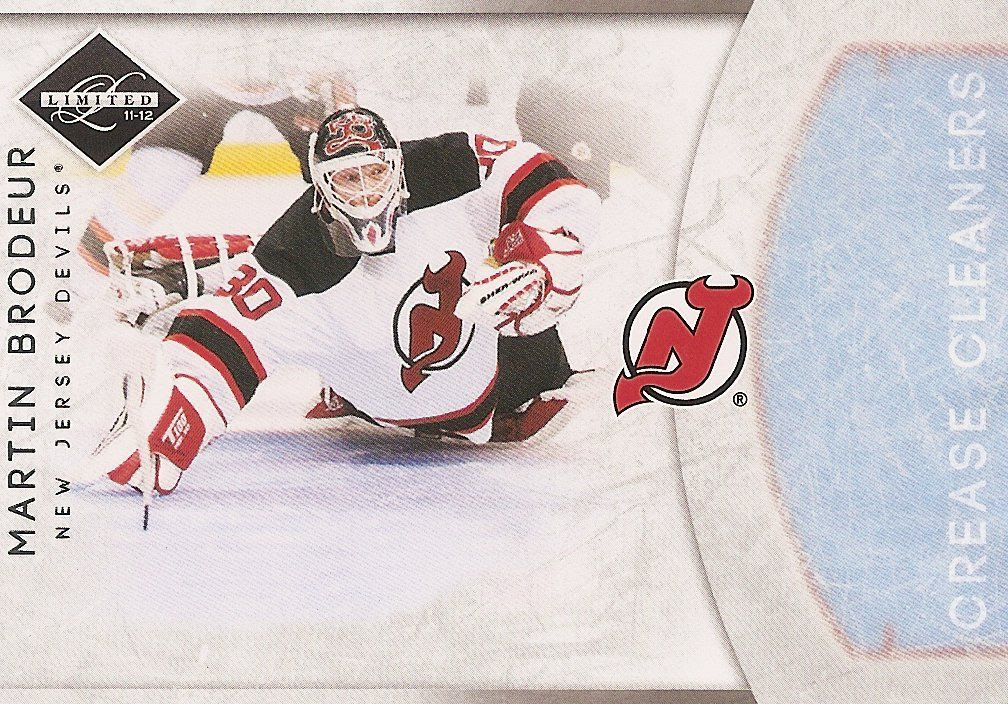 This insert card of Martin Brodeur is called Crease Cleaners.  Obviously this insert set features the star goalies of the NHL.  The inserts within Limited usually come in different variations with this one being the most basic.  You will find when you open up Limited that each type of insert will have one with no autograph or memorabilia and others that include them.  For player collectors, you will need to find out what variations of the cards your player has.  Unfortunately, the checklist included with each box of Limited does not specify the different tiers and variations of the cards. 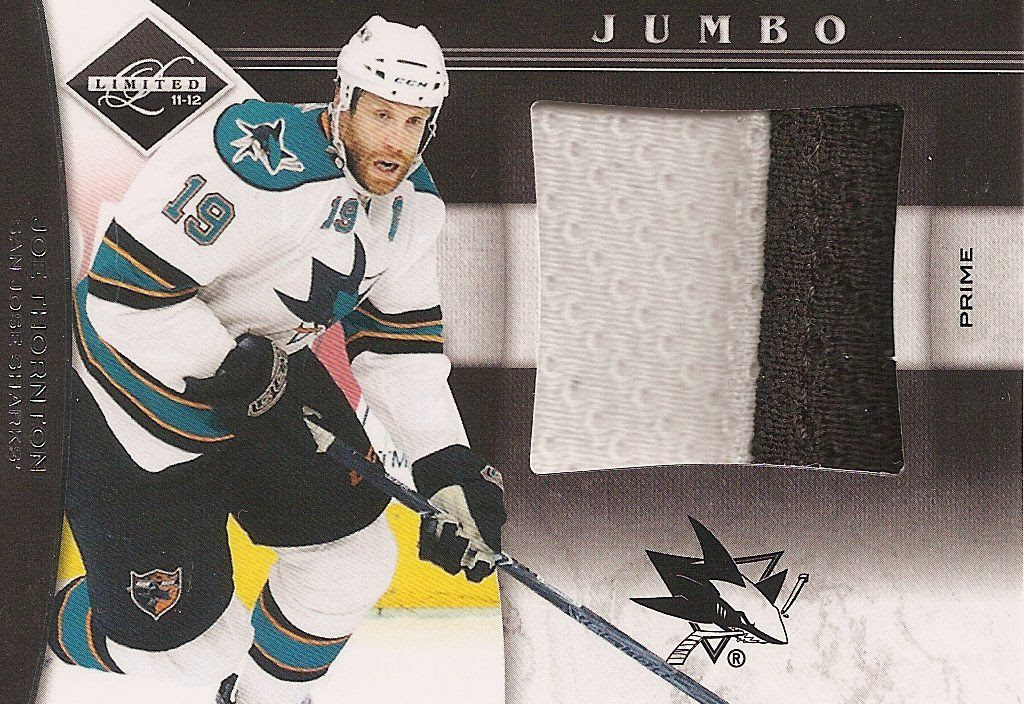 One thing that I would like to mention is that Panini has done a better job of masking the areas where jersey pieces, patches, and autographs should be on inserts.  In past Limited releases, many of the cards had large areas of blank space where higher level variations would have autographs or memorabilia.  The Brodeur card seen earlier is a good example of that as well as the Joe Thornton patch card shown above.  This jumbo jersey card features a sweet piece of prime jersey.  Another variation of this card would have an autograph below the swatch where the Sharks logo is.  Now, Panini would fill in the space with team logos in previous releases, but this year the space feels smaller so that it doesn't feel as much like something is missing.  It's not perfect, but I sense that Panini is making an effort to make their cards better.  I know a lot of collectors did not like those large blank spaces on their cards - me included. 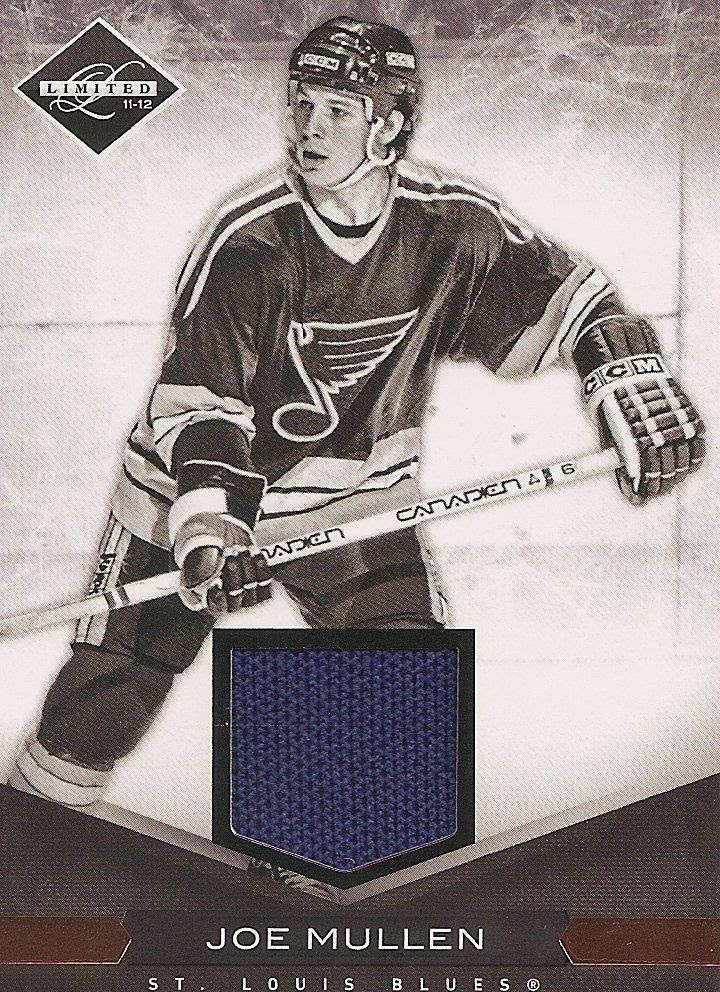 Probably the most common type of memorabilia/auto card will be the base card variations.  These are simply base cards with added autographs, jerseys, or patches.  They come with various levels of rarity and are quite a challenge to put together for player collectors.

Though I did not get many of them, there are quite a few different inserts to be found in Limited boxes this year.  Banner Season, Retired Numbers, and Captains Courageous make a return.  Private Signings can be found here too.  One of the more unique inserts are the Net Presence cards.  These inserts feature game-used nets.  Personally, I'm not interested in nets.  They don't really have a connection to a single player... it sort of has a connection to the goalie and all the players who have shot into it, but it's not a very personal item.  I'd be interested to see how collector's feel about these type of cards.  They actually remind me a bit of the game-used floor pieces in basketball cards.  Every basketball player has probably stepped on that piece and the only thing that makes it a part of the player is the picture on the card.  I don't know, perhaps more thinking is needed on these types of cards.


Overall Rating -
This year's Limited is an interesting but expensive product.  It's the first premium product from Panini and the price certainly reflects that.  I enjoyed opening my box of Limited, but I think the cost of each box can be pretty prohibitive for most collectors.  At about $100 per box, it's a very risky gamble.  Typically a box of Limited will yield some kind of autograph or two, a jersey card, and maybe a patch card... maybe.  Usually a couple of the hits in the box are not very strong, and you would be lucky to get one card that is a winner money-wise.  So the best you can hope for realistically is one nice card and a couple of so-so cards.  Do you consider that risky?  I certainly do.

I see Limited as a high roller's product.  People that can afford it by buying boxes or a case at a time will get the most out of it.  For those (like yours truly) who can only afford maybe a box or two, I think it's too much of a risk.  I can say that I will buy products like this just to try out and have fun with, but if you're looking for good trade bait or a nice return, I would advise looking elsewhere.  Each case of Limited contains 15 boxes.  So getting a case hit in one or two boxes would be very difficult.

All in all, Panini has improved upon Limited this year.  There are definitely nice cards to be found.  I hope that a lot of collectors with deep pockets get cracking so everyone else can pick up the singles they need!