Round One... FIGHT!  GET OVER HERE!  FIVE HIT COMBO... BRUTALITY... wait... this isn't Mortal Kombat... it's 11/12 ITG Enforcers!  A unique set of hockey cards celebrating the toughest of the tough that have ever played the game. 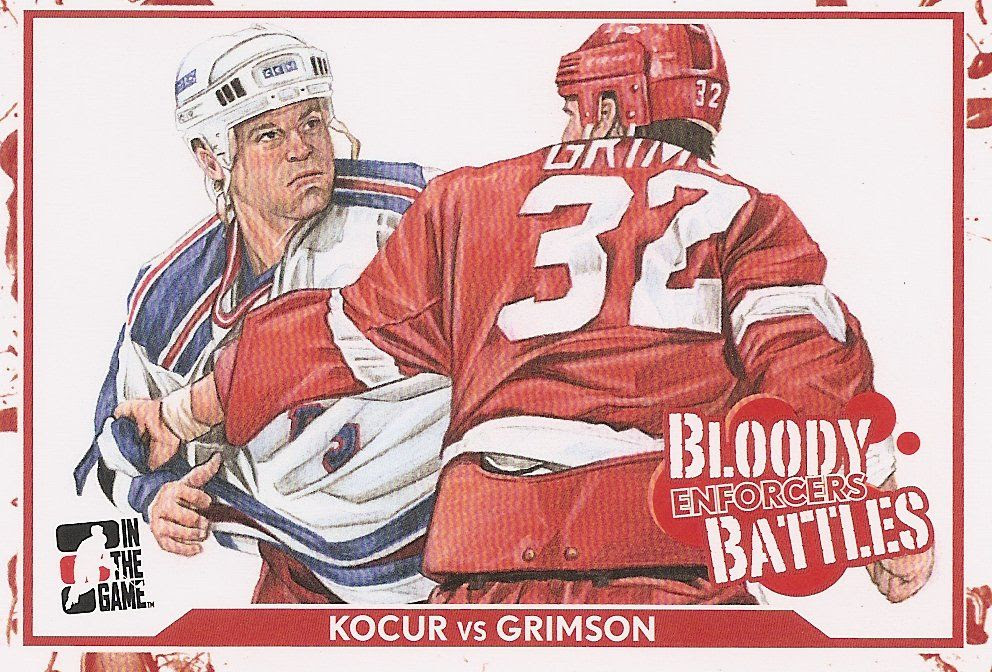 Base Card Design -
Like many of the one-pack ITG offerings of late, Enforcers does away with a standard base card and gives us insert style cards instead.  The best of the bunch have to be the painted Bloody Battles cards.  These cards immediately stood out to me when I saw them.  ITG was smart to include these art cards because they allow ITG to have great images of the featured players without worrying about showing NHL licensed logos or properties.  For those of you who don't know, ITG is not a licensed manufacturer of hockey cards so they are very limited in what they can use in terms of images on their products.

The Bloody Battle cards all feature a white and red color scheme.  The white background gives a great contrast to the painted images and crimson blood splatter around the edges.  I have to say that I am not a fan of the blood splatter look - it's tacky - but it probably works best on this card.  Also a bit dated are the fonts used on these and other cards in the set.  I know it seems like nit-picking, but these small details make a big difference in how I (and other consumers) view the product. 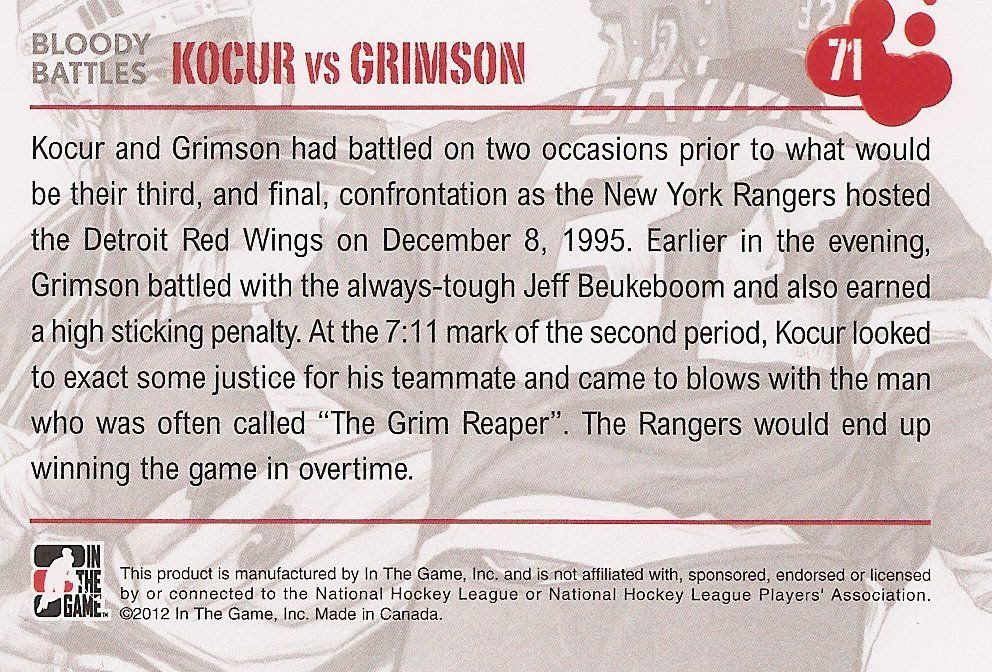 The back of the Bloody Battles cards give a very nice write-up of the action shown on the front.  Like with other ITG products, I find myself impressed by and interested in the information on the backside.  Other insert cards give similar descriptions or enforcer-centric stats. 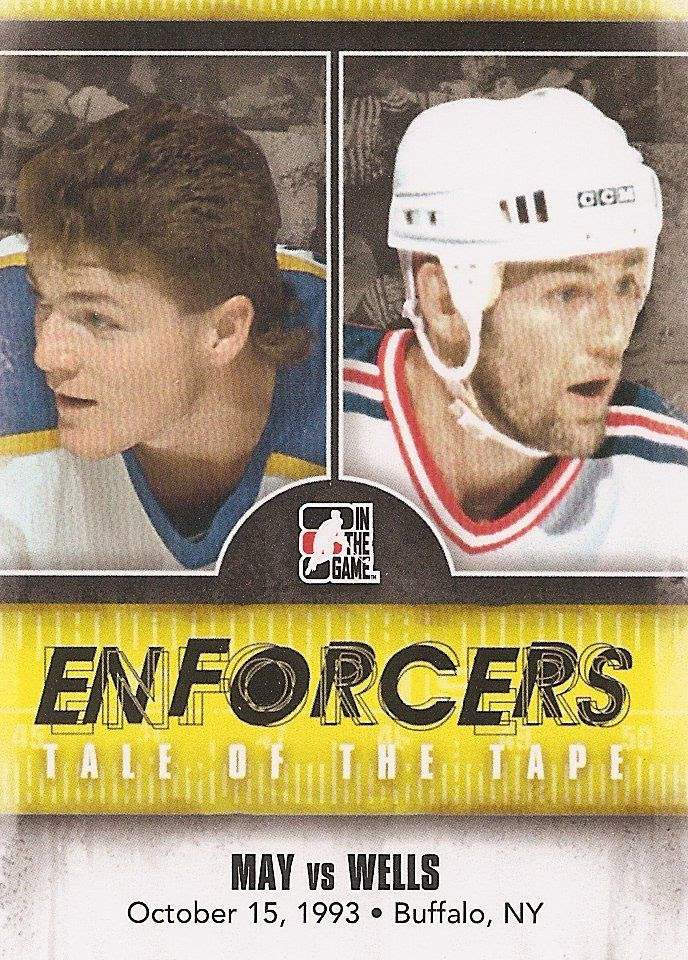 This Tale of the Tape insert is an example of a card that features both a description and enforcer statistics on the back.  Like two heavy weights in a weigh-in, the card puts their vital statistics side by side for comparison.  It also recounts the time these two players dropped gloves to go at it on the ice.  This card is also a good example of the limitations ITG has with the photos they can use.  As you can see, the images are closely cropped head shots.  Most all of the photos are like this to avoid seeing team logos and symbols.  It's unfortunate that these are the images ITG has to work with, but I understand it's the best they can do with what they have.

Inserts/Game-Used/Autos -
Each box of Enforcers will come packed with 2 jersey/patch cards and 5 autographs.  It's impressive that the majority of memorabilia cards are autographs.  In my opinion, it's always nicer to have a signature rather than a piece of cloth. 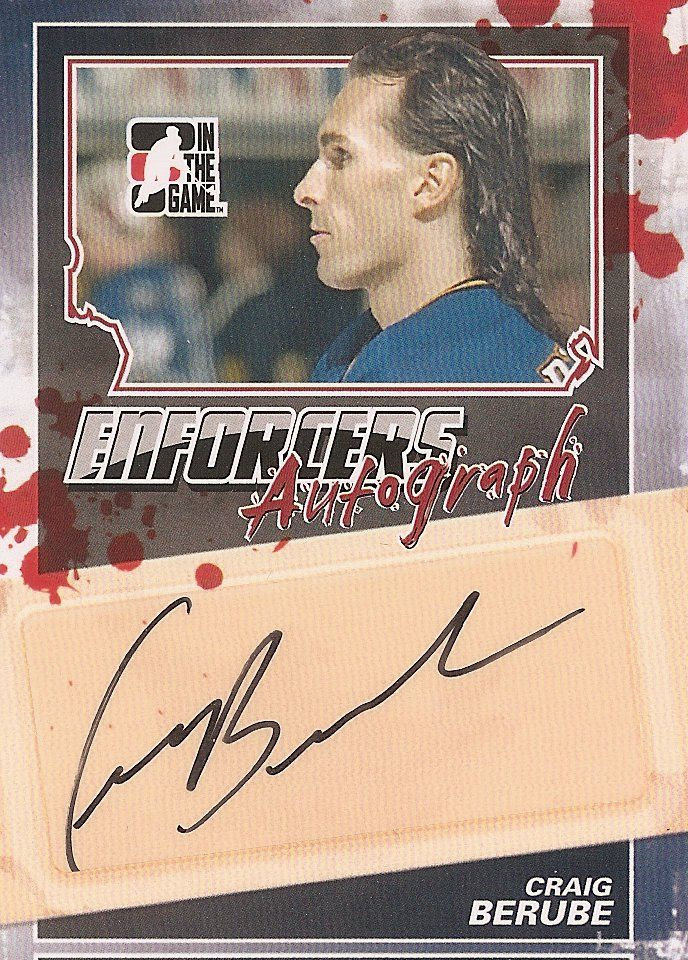 The standard autographs come on a very smartly designed card.  As with the insert cards I was not impressed with the tacky blood splatter or late 90's style graphics and font, but I did really enjoy the idea of the signatures being on large band-aids.  What a perfect idea for this set of cards!  This idea makes perfect sense and certainly does stand out in a fun and cool way.  The autographs are on stickers, but because of the design, you can hardly tell.  The slight 'bump' of the sticker mimics the cloth under the band-aid just right.  Give whoever came up with this idea a raise Dr. Price! 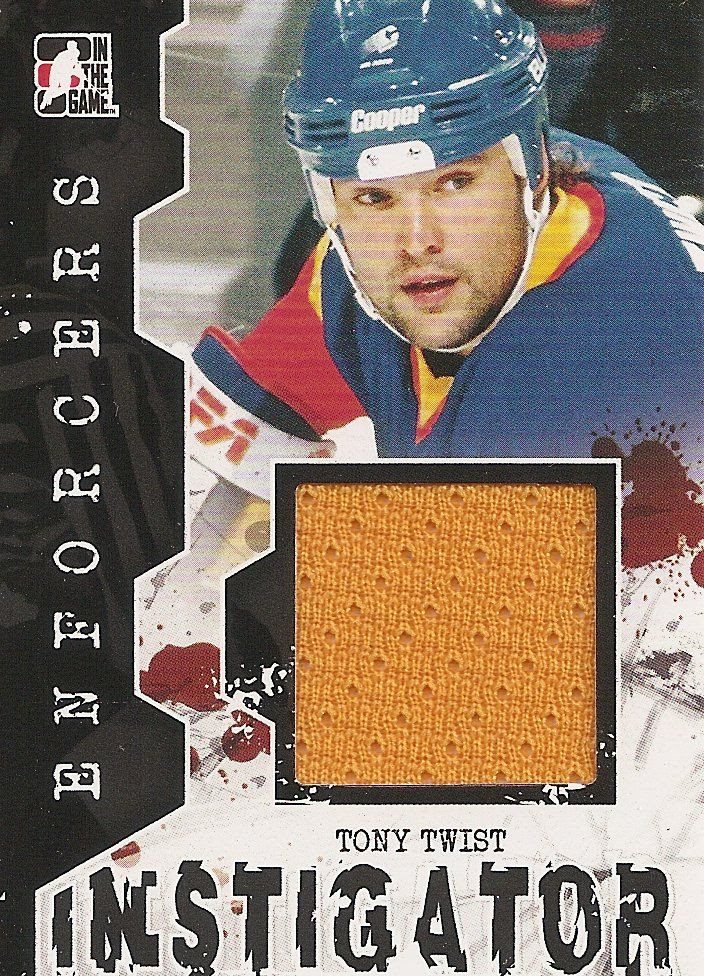 Single player jersey cards contain a generous swatch of jersey.  I particularly like the Tony Twist jersey piece in this Instigator memorabilia card because the color of it is so bright on the card.  This jersey insert set design is on the busier side, but works well.  The left side border gives the card a more current look.  As per all ITG memorabilia cards, the back clearly states that the jersey piece came from a St. Louis Blues jersey that was game-worn by Tony Twist.  Love how ITG steps up and does this.  Can other card companies follow suit with this practice? 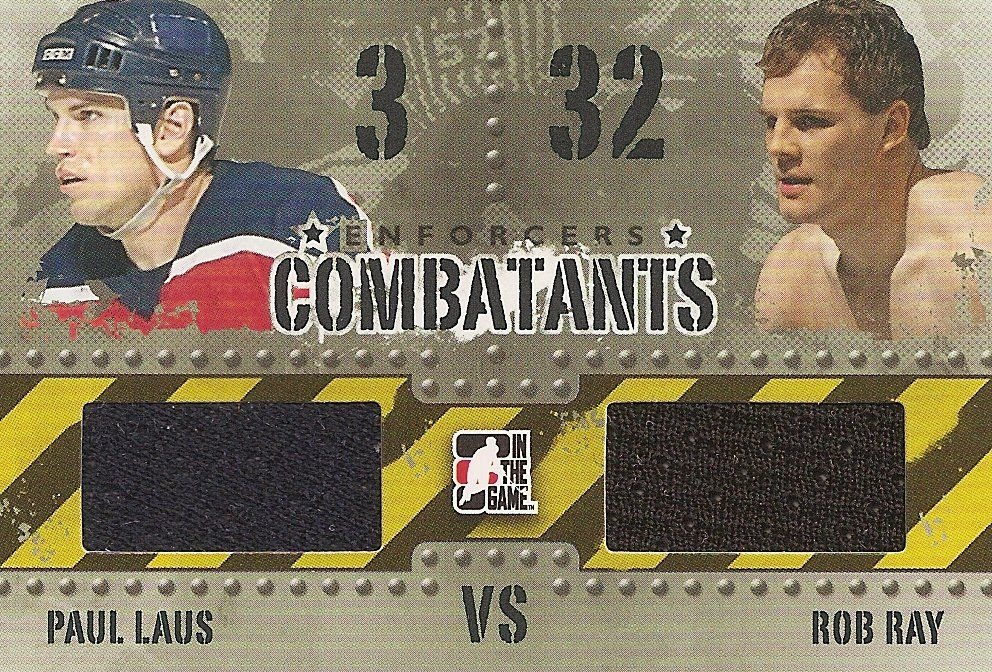 This Combatants dual jersey card shown above is typical of a card featuring two players.  The swatches are smaller than those of their single player card brethren.  Unlike the Instigator insert, this one goes for an extreme industrial or possibly alien/space-marine type feel - at least that's what it reminds me of - could also be some sort of military or underground fighting ring design... not sure.  I am sure, however, that I am not a fan of the design here.  'Dated' would again apply here.

Some of the nicest cards in the Enforcers set are also the most difficult to get.  ITG has included Tough Patch 1 of 1 gigantic game-used patch pieces in this set.  These cards look amazing and deserve the hardest-to-get status they hold in the product.

Overall Rating -
11/12 ITG Enforcers is a product for a very niche portion of an already niche collecting base.  The set focuses on players that are not the big scorers, most skilled skaters, or flashiest goalies.  It's a set of the tough guys.  To make a comparison, it would be similar to a football card set composed of only the defensive players.  Would people buy it?  Well... yes... some, but definitely not a majority.

Though I am not a fan of these players as a whole, I really appreciate what ITG has done here.  They have come out with a set that fills a void in the hobby.  It's great to see cards of players that made an impact on the ice that didn't involve filling up the offensive side of the score sheet.  These players played pivotal roles on their teams and certainly have fans.  Now these fans can get some autograph and memorabilia cards of these players.

I would not recommend this product to anyone except those who would appreciate it.  It's definitely not a product to go out and buy to get traders or cards to flip for a quick profit.  I found it fun to open and enjoy, but I probably will not be dipping into it any more than that.  I do hope, however, that there are tough guy fans out there who will buy heavily into this product and really savor it.  It's a rare treat for sure.