The month of December has seen no new hockey card products... until now!  Huge thanks to Panini for releasing Pinnacle just before Christmas and the new year!  I'm so glad that there is something new to bust open and collect.  Let's rip into a couple boxes of this product and see what comes out! 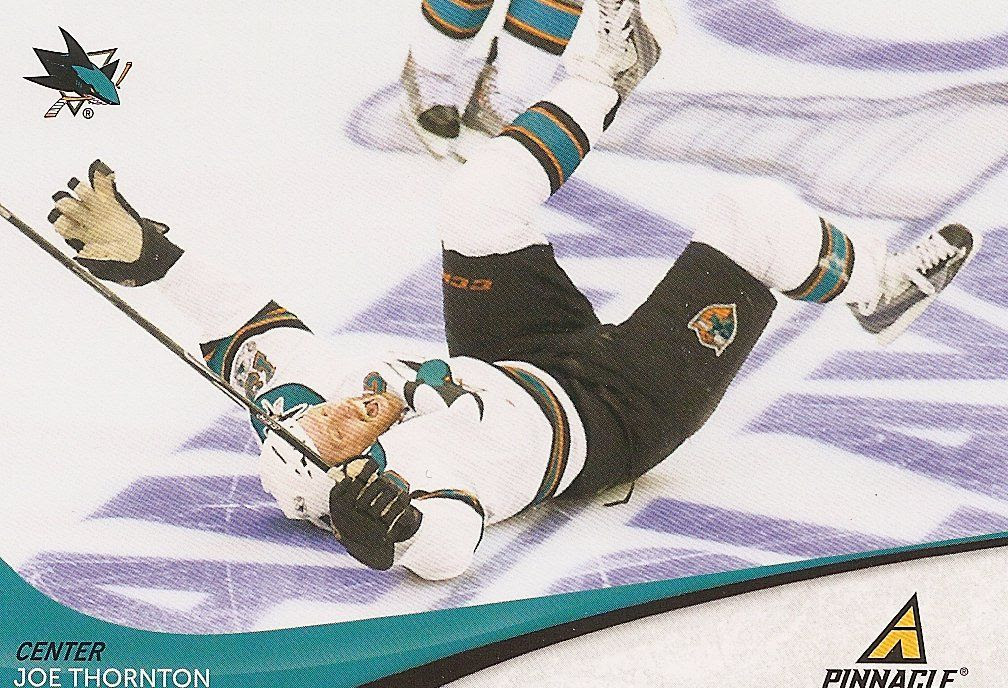 Base Card Design -
Pinnacle arrives with a smoothly designed, very clean base card.  Each card has a slick glossy feel on the front and a more matted type finish on the back.  The base cards are all horizontally oriented - which is actually great for showcasing the photographs of the players.  Like last year, Panini has placed some of the most unique pictures into this brand of hockey cards.  We'll talk more about that later. 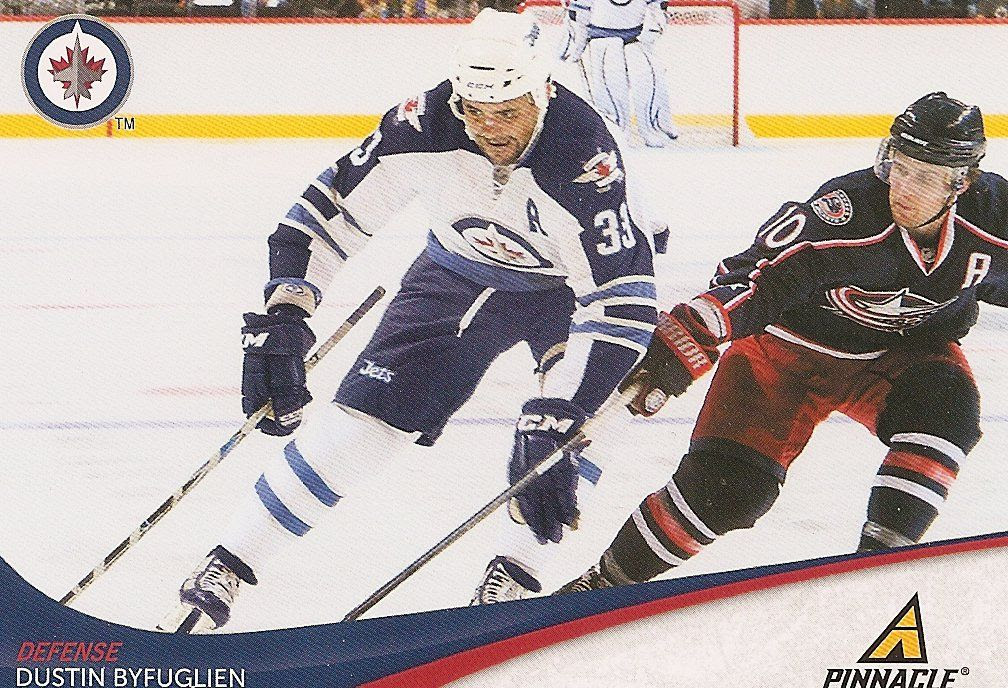 It's great to see actual action shots of the Jets!

The front side of the standard base cards all share similar elements to them.  Each base card has a team-color themed border with the player's name and position.  The Pinnacle brand logo is placed along the bottom right corner and the team logo is placed in the upper left.  Though I do feel this year's Pinnacle design is an improvement from last years, I am not thrilled with it.  As with many of Panini's products at this mid/low-end tier, the cards are very flat.  These cards need to have a bit of foil or texturing to them to liven them up.  I would have loved to see the Pinnacle logo, the team logo, or the bottom border with foil touches.  Panini has access to their foil Dufex/Nufex technology.  Adding some elements of that process to portions of the base card could have also upped the quality of the base cards.  As they are, the base cards are, like I said before, flat and a bit boring in the design department.

Unlike the bland design of the base cards, the photographs that Panini has chosen to put on the face of the base cards do stand out in a very positive way.  It was great fun to just shuffle through my stack of base cards and see the unique shots that were chosen for this set.  More than any other Panini set out there, this one is the one that you can tell a lot of time was spent in carefully selecting photos.  It definitely gives Upper Deck Series 1 a run for its money in terms of fabulous images.  Here are a few select images from Pinnacle that stood out to me. 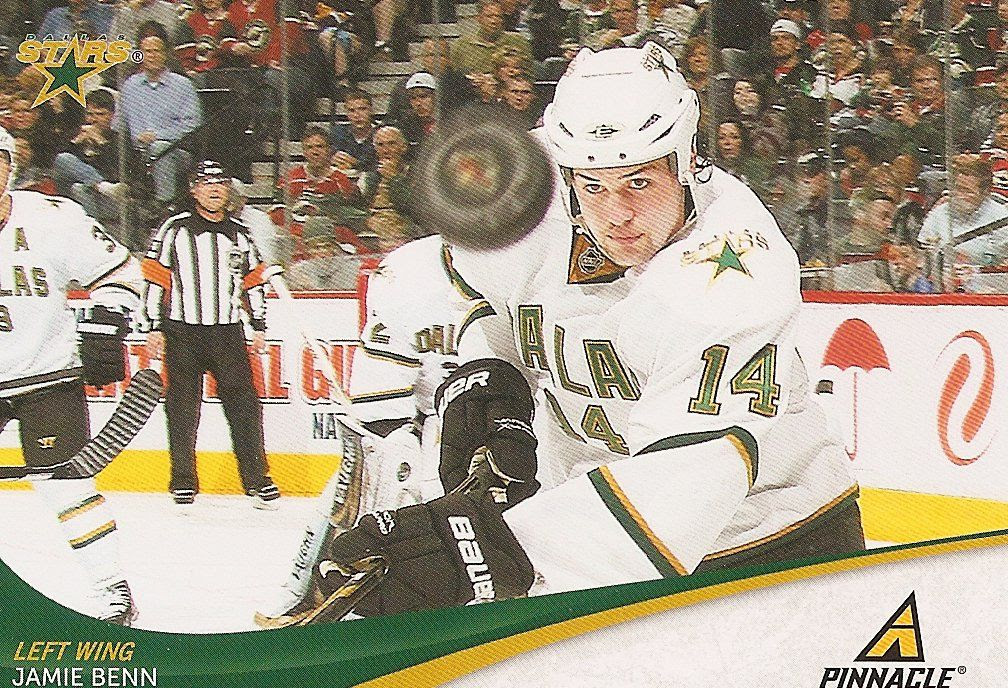 I love this shot of Benn's concentration on the puck. 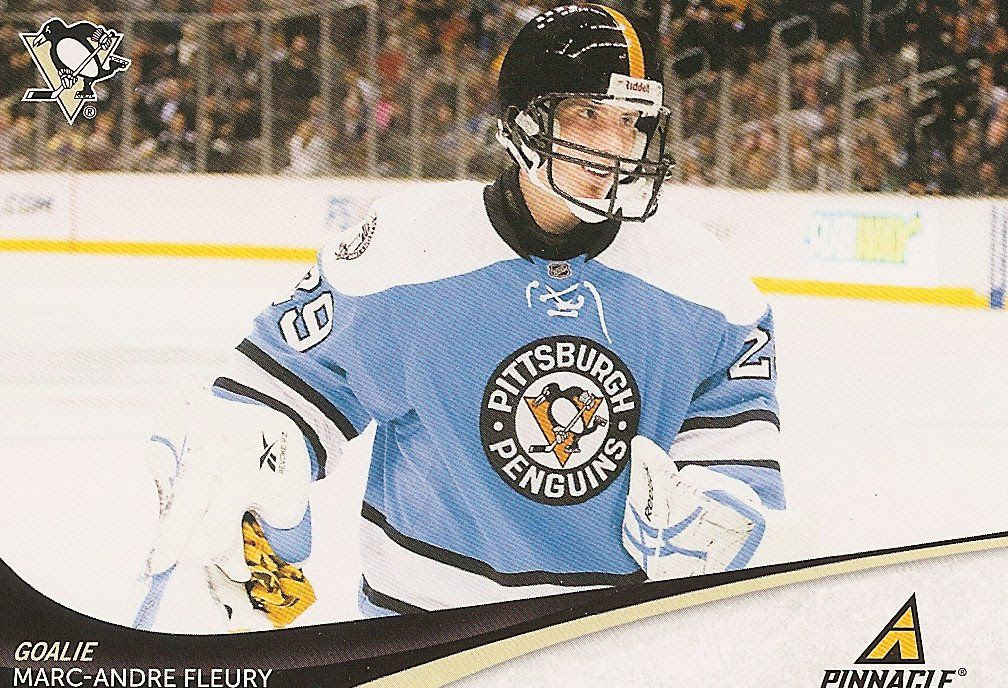 Here's a great moment from the Winter Classic. 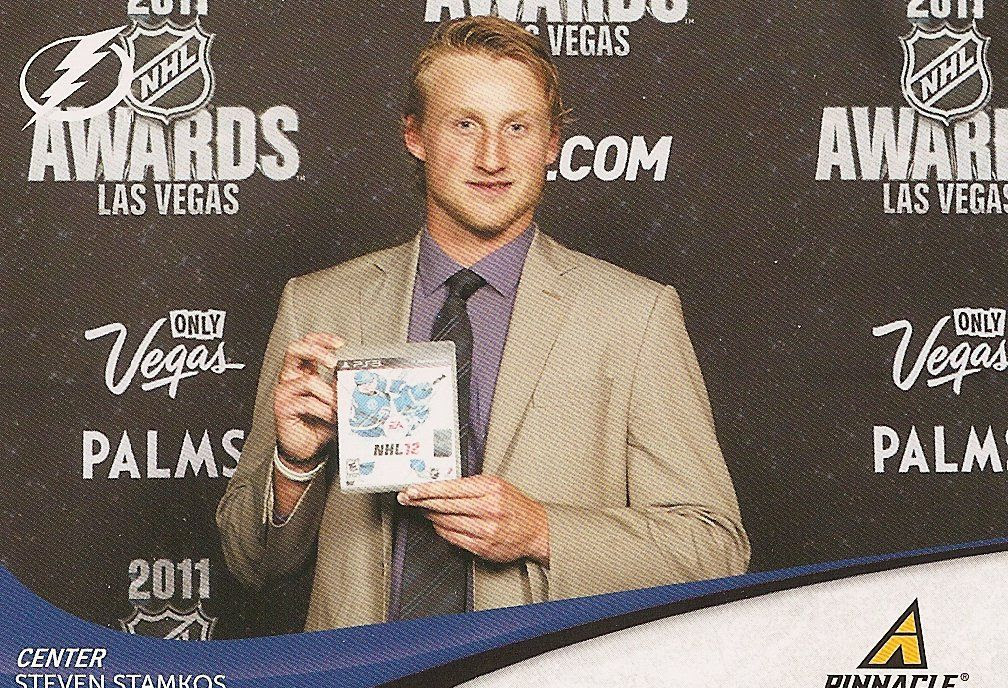 Stammer shows off the new NHL '12 cover with him on it. 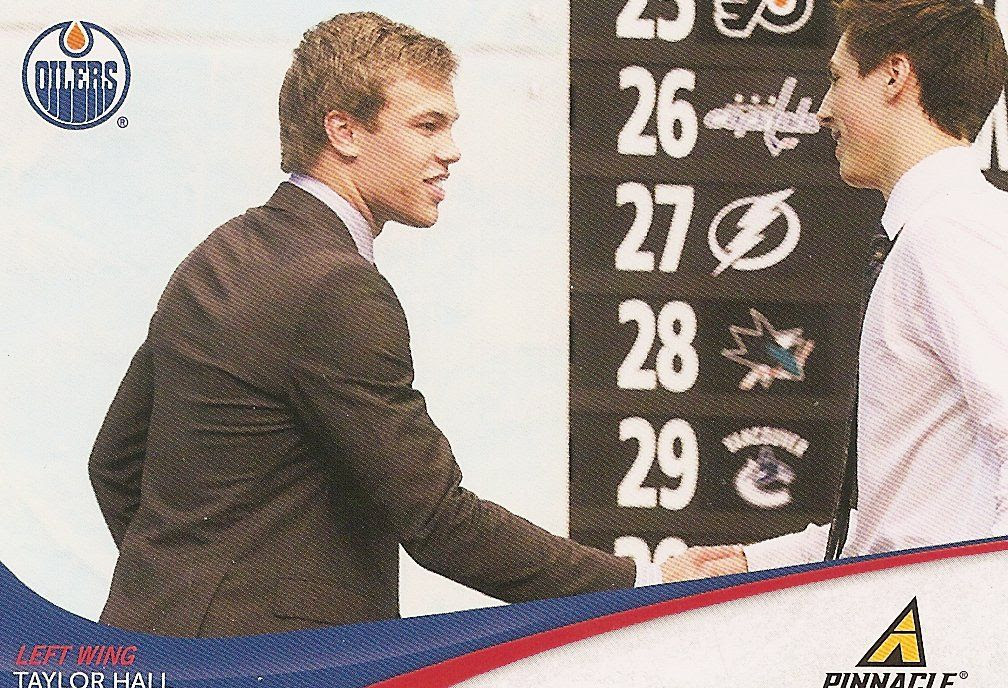 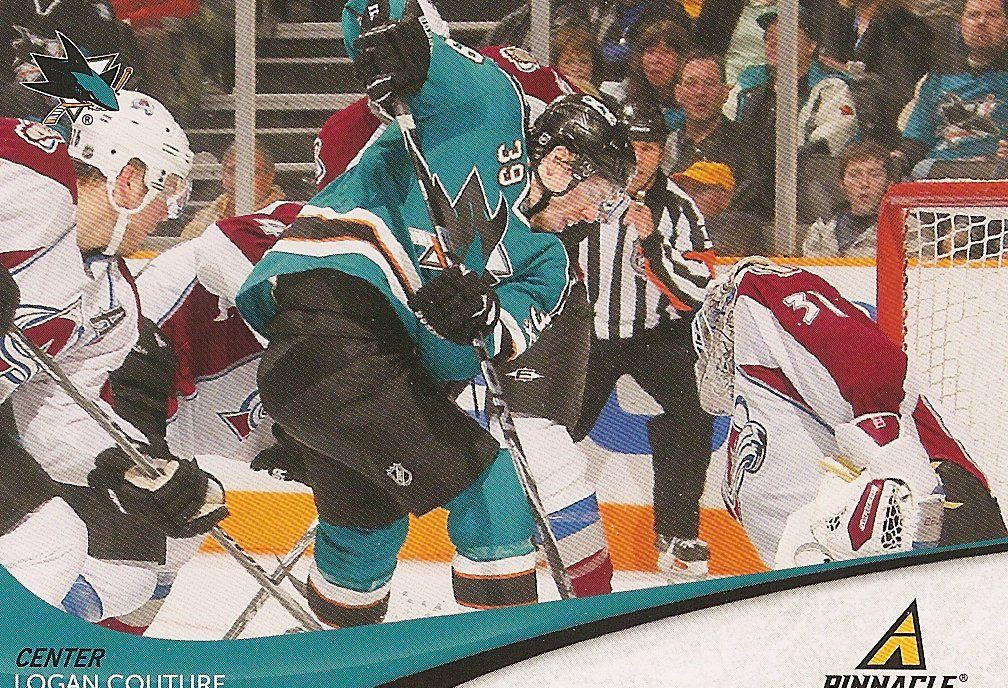 Couture battling in front of the Colorado net. 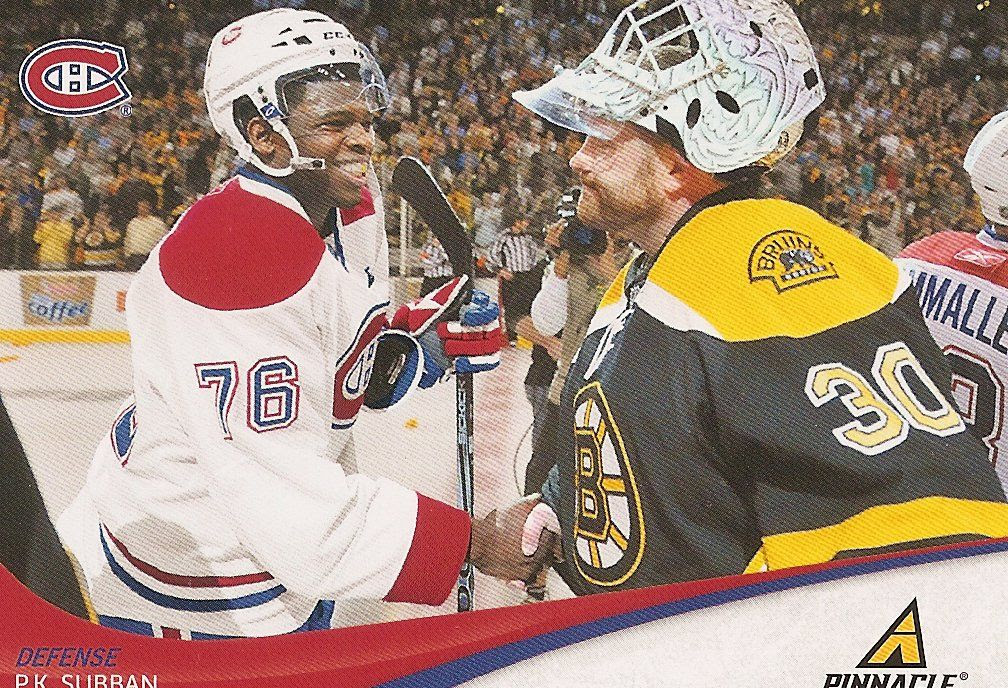 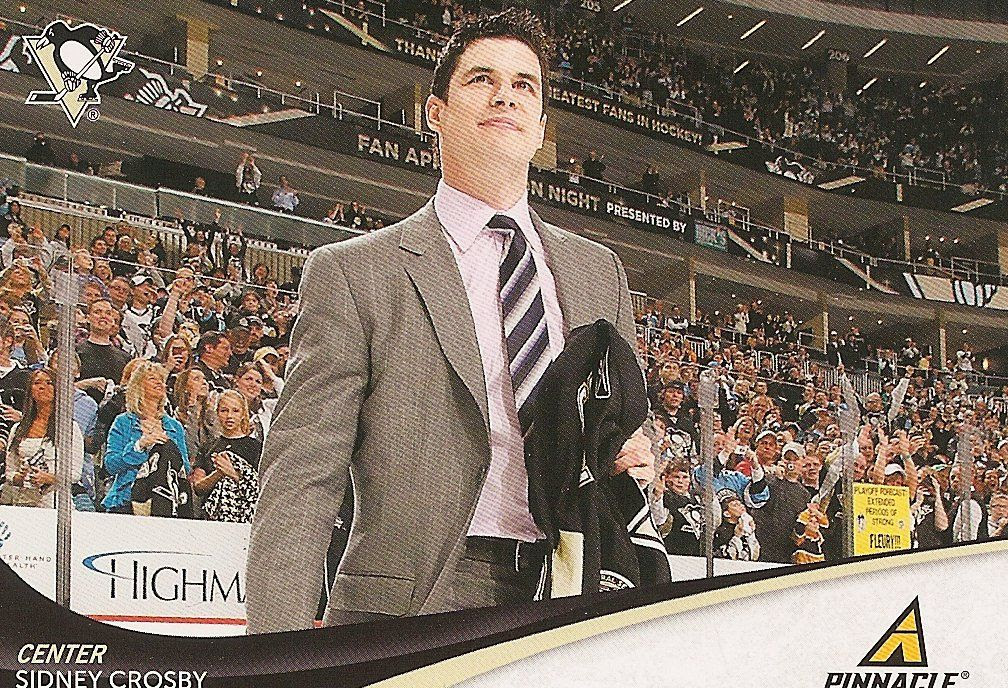 Yep, this is what Sid the Kid mostly looks like this year :( 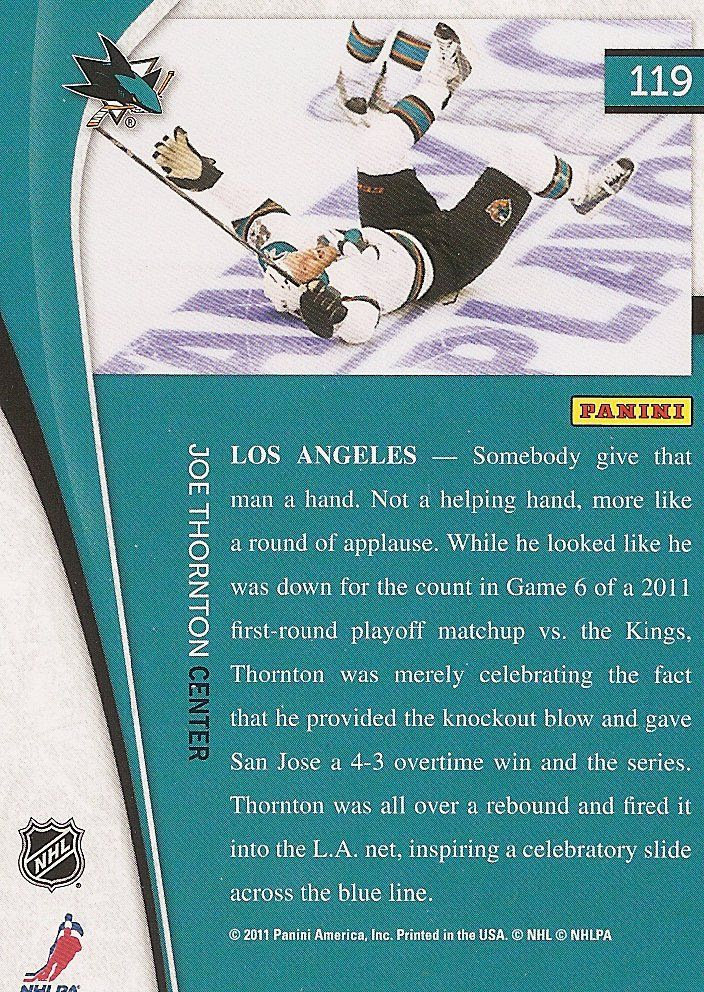 The back's of the cards tell the story of the photo on the front.  It describes the situation in which the photo was taken in so it makes perfect sense to have the same photo.  I am impressed with how Panini was able to include a write-up of specific moments during the NHL season and pair it with the appropriate image.  This is not done very often and I applaud Panini's efforts here.  Nice job Panini!  Clap clap! 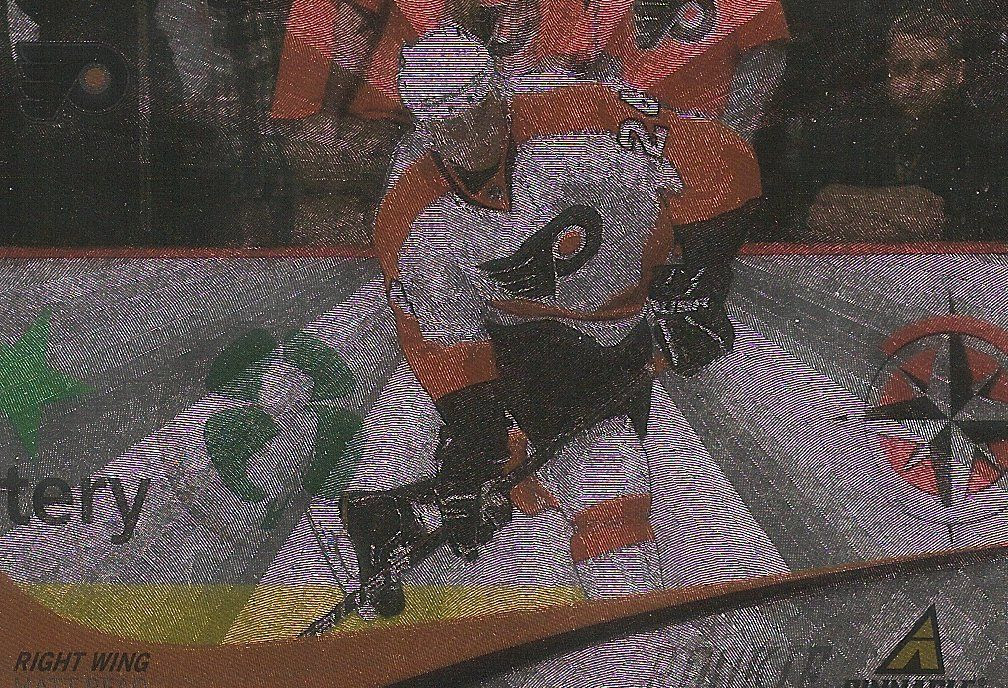 As usual, the rookie cards get special attention within the main set of cards.  Each rookie card in Pinnacle is featured with Panini's Nufex foil technology.  Panini needed to spice up the rookie cards in this set because their initial offering last year was extremely weak.  Adding the Nufex foil to all the rookie cards does make them stand out - certainly more than just adding an ugly 'Ice Breakers' logo to the card like they did last year.  If you look closely at the rookie cards, you'll notice that they look exactly the same as the standard base card except with the word 'rookie' next to the Pinnacle logo.  There is actually no mention that these rookie cards are called Ice Breakers save for on the checklist.  I did find that a little odd.  It's not that big of deal though.  These cards look great, and you'll find 3-4 of them in each 24 pack hobby box. 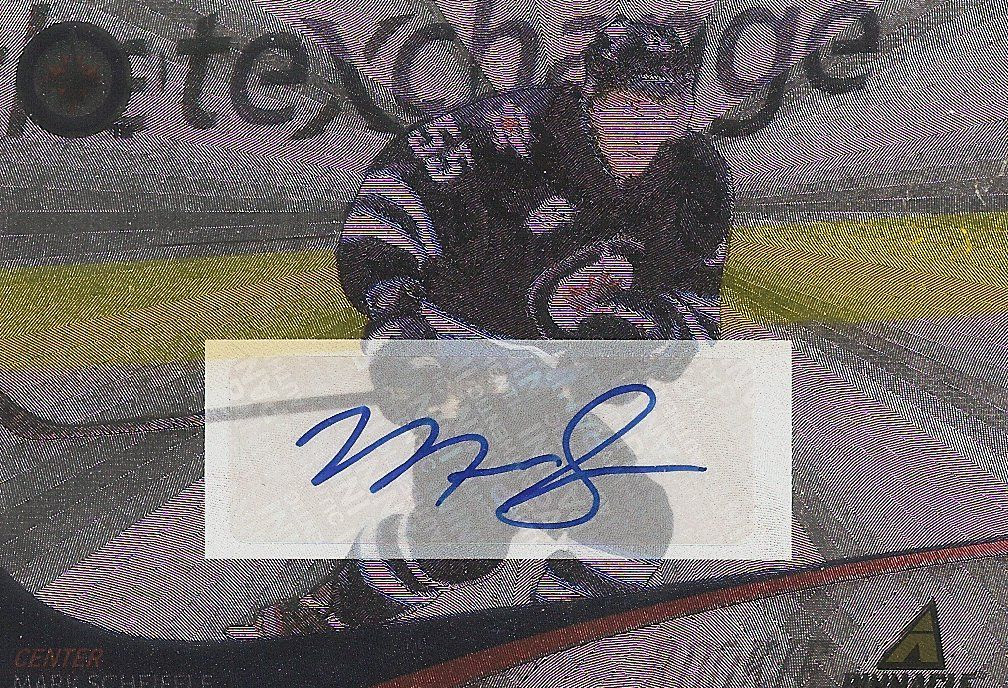 Something you will not find in each box of Pinnacle are the autographed Ice Breakers.  Rookies numbered 281-290 feature sticker autographs.  Here you'll find players like Mark Scheifele, Cody Hodgson, Gabriel Landeskog, and Ryan Nugent-Hopkins.  I must say that while it's great to be able to pull autographs of these hot rookies, the way these are done does not impress.  The cards have a rectangular space in the middle of the card for the sticker autograph to go.  It is certainly an awkward design.  In person these sticker autographs remind me of a band-aid that's just slapped on the front.  There must have been a better way to do this.  C'mon Panini!

Inserts/Game-Used/Autos -
Each hobby box of Panini will yield about three hits and a smattering of different insert cards.  This year Panini has improved on past insert designs and created a few new ones for collectors to chase. 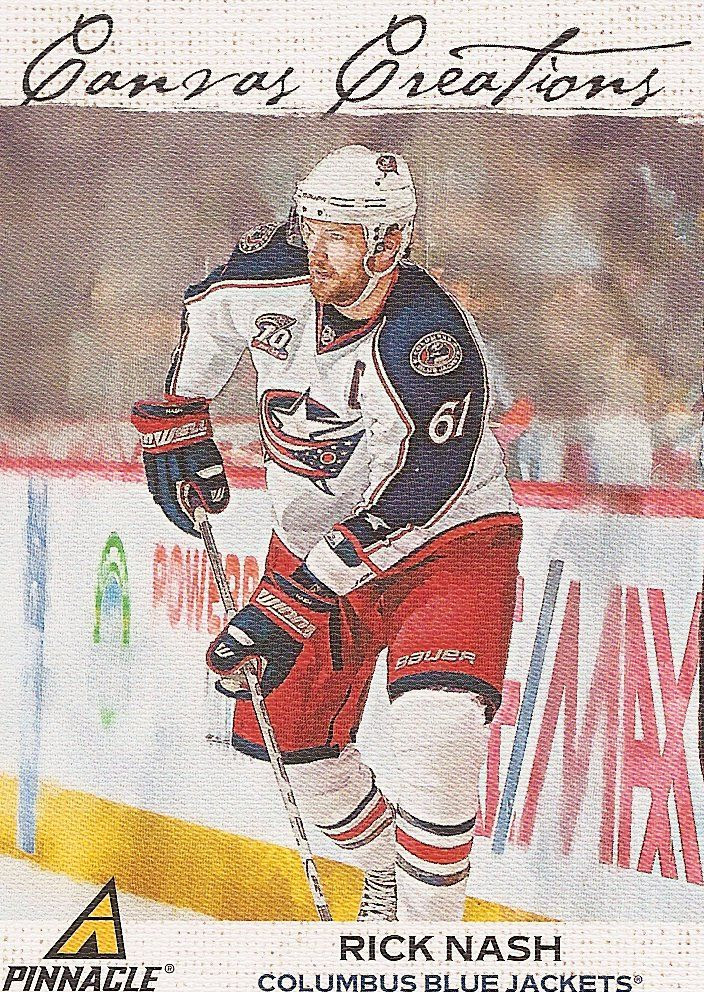 One of the new insertions this year are the Canvas Creations cards.  This must be inspired a bit by last year's Chemistry on Canvas cards, but instead of featuring two players, it features a fully painted card of just one.  This card is bright and has an elegant look to it.  As you might expect, these inserts have a textured front like a matte painting would have.  Fans of these types of cards will certainly enjoy this set. 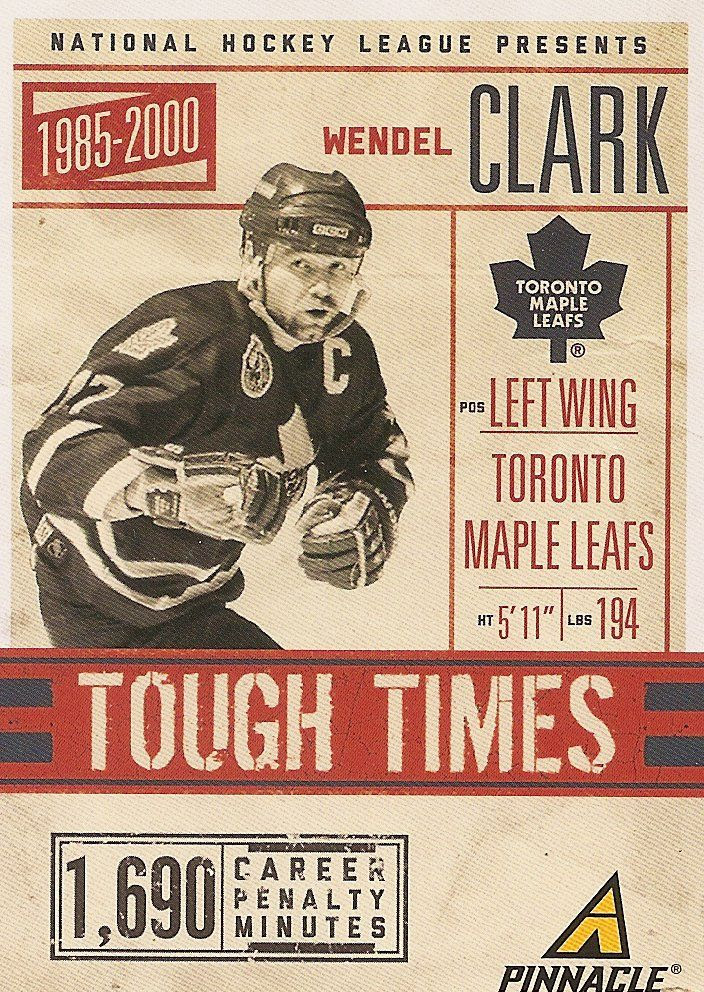 The Tough Times inserts are back this year and have a new updated look.  This year the cards feature more information on the front.  This one of Wendel Clark has all the standard team and bio statistics as well as his career penalty minutes.  The look of the card is that of an old advertisement poster you might see on the side of a building.  I think it would have been great to make these cards have that paper feel to them to make them extra unique and completely fill out the theme the designers were going for.  Like last year there are autographed versions to be found. 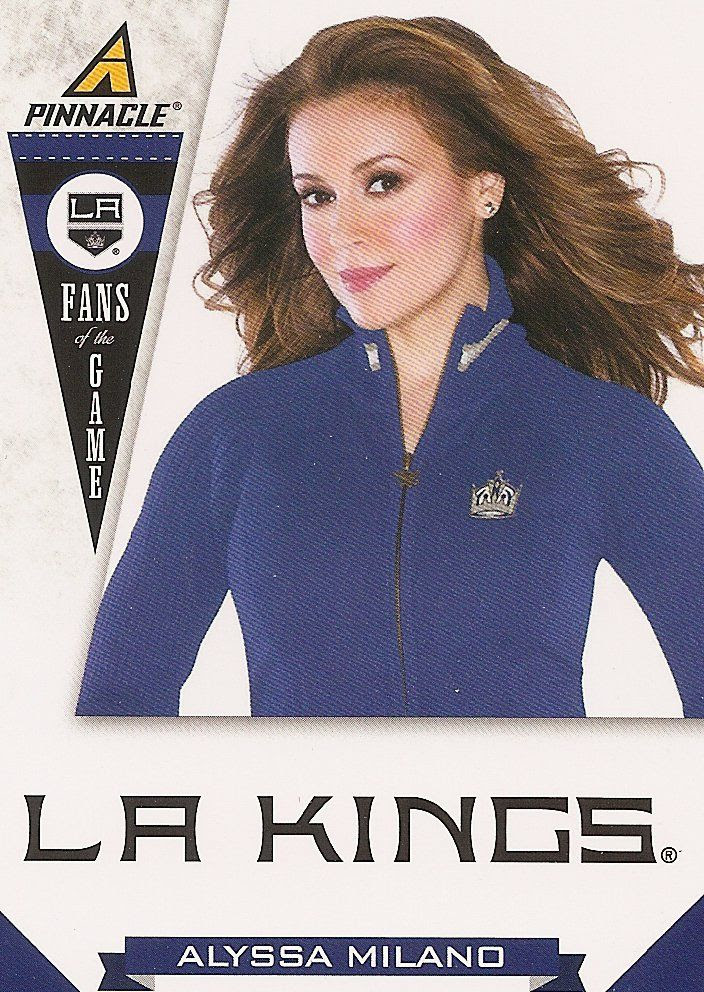 Fans of the Game inserts make their return as well.  I think these cards look great (not just because Alyssa Milano is on the front of one).  I really like how bright and modern the cards look.  A huge step up from what they had previously. 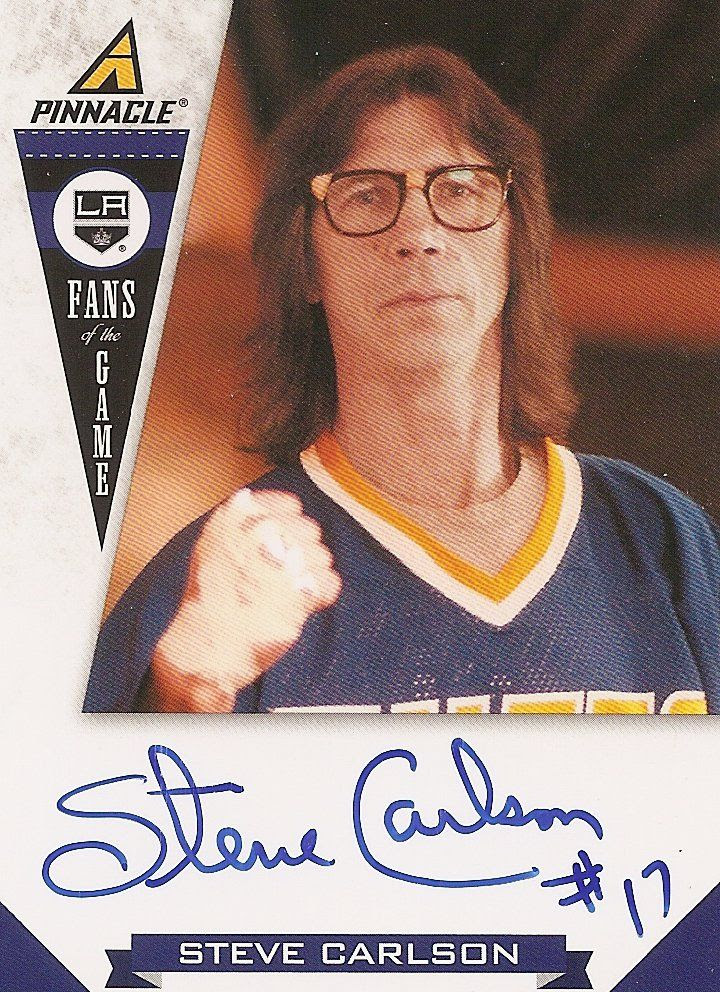 The space for the autograph is well done on these inserts.  I only wish they were so on all Panini's offerings.  Now why did I get Steve's auto and not Alyssa's!?!  Can these two cards be more polar opposite? 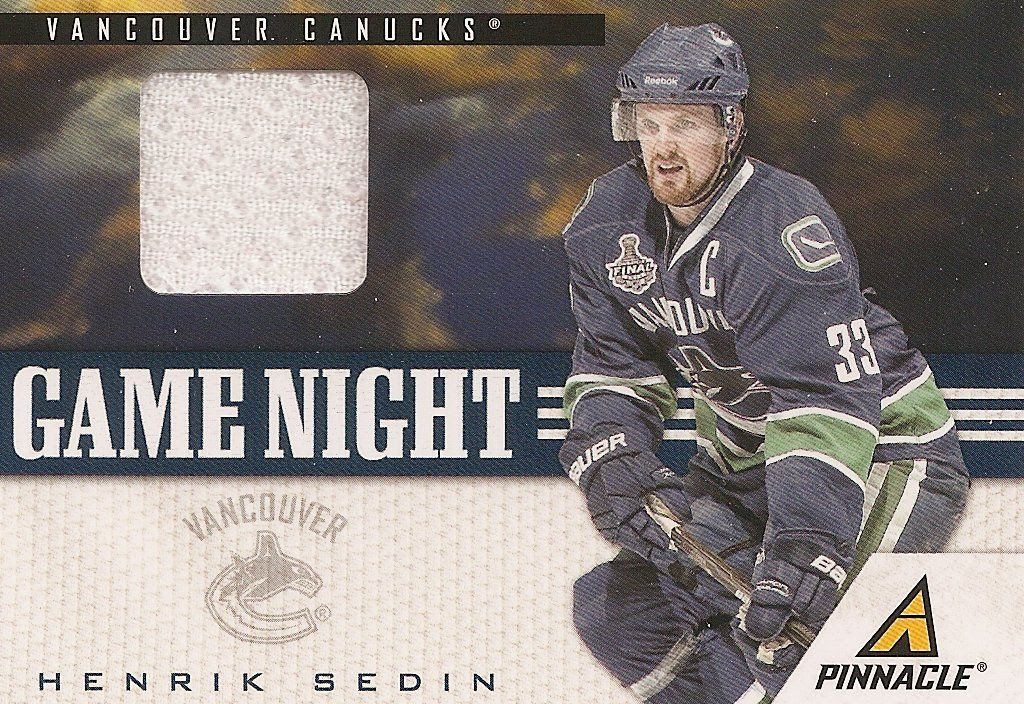 In terms of game-used cards, Pinnacle introduces Game Night cards.  These are pretty standard jersey cards with a nice background design.  This insert set reminds me a little of the Canvas Creations set.  Both have a modern elegance to them.  Though it's just a standard jersey insert, these look classy.  I think this would be a nice and relatively easy set to complete (unless there are short prints that I'm not aware of).  These Game Night cards also may feature autographed versions. 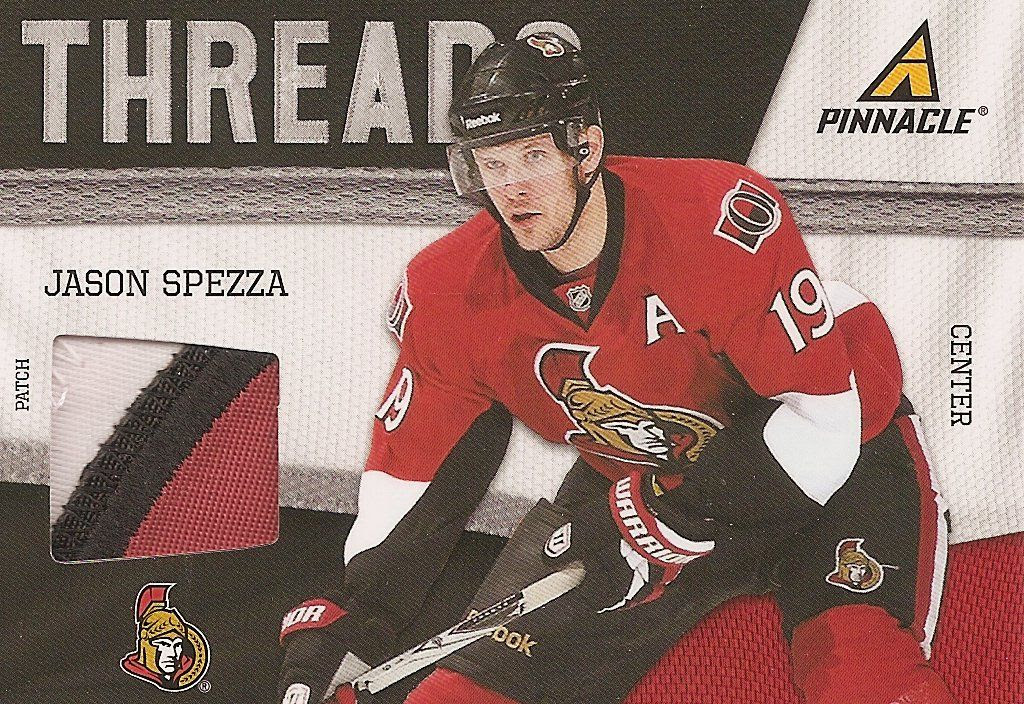 A more generic (and larger) set are the Threads cards.  I guess you could say this is Pinnacle's version of Certified's Fabric of the Game cards.  This insert set is all about the jersey and patch pieces.  The standard jersey cards are nothing spectacular, but the patch versions can feature some pretty nice pieces and are pretty low numbered.  The Spezza shown above is serial numbered to just 25.  This would be a very challenging set to assemble.  According to the checklist there are 90 Threads insert cards.  I have a feeling that people who buy Pinnacle blasters will be pulling these pretty regularly. 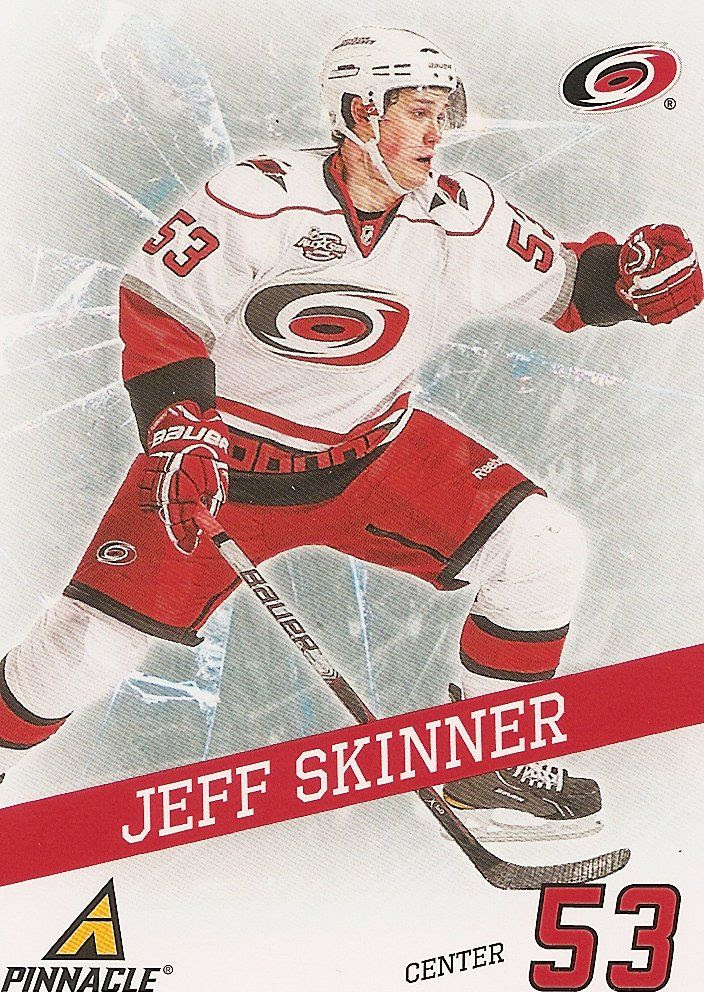 There are other inserts to be found within Pinnacle boxes.  Some that have made a return from last year are Team Pinnacle, Pantheon, and Yours Truly (originally from Zenith).  Some are new like Breathroughs (shown above), Pinnacle Black, Pinnacle Captains, and Starting Six Threads featuring 6 pieces of game-used materials.  Overall there is a whole lot to find when purchasing a box of Pinnacle.

Overall Rating -
Pinnacle will be a brand that most can afford.  It is on-par with Upper Deck Series 1 in terms of pricing.  I have to say that the quality of UD1 is a bit higher than that of Pinnacle, but Pinnacle shines much more brightly in terms of the amount and types of different insert sets (with and without memorabilia) available.  I am a big fan of the photographs used in the base set and enjoyed being able to find autographed rookie cards.  What I didn't like about Pinnacle was the overall quality of card design.  It was a real roller coaster.  Some aspects of Pinnacle were extremely well done, while others weren't so much.

I think that Pinnacle is still trying to find its legs.  The 11/12 offering is an improvement over last years.  It's a fun product to open, but I would recommend only Pinnacle in smaller doses and certainly only by the hobby box.  Per pack it will be difficult to pull a good hit, and per blaster I have nightmares of getting no name Threads cards.

Pinnacle hits the market at the perfect time.  It's a nice, relatively cheap, product that can provide some thrills at a time when not a whole lot of new hockey cards are out.  Have fun cracking some boxes!

Check out my two boxes of 11/12 Pinnacle opened at D&P Cards in Sacramento.