The most solid product year in and year out has arrived!  Yes, it's Upper Deck Series 1 Hockey, complete with the most desired rookie cards, the Young Guns.  How does this year's release look?  Anything new for 2011-12?  You bet! 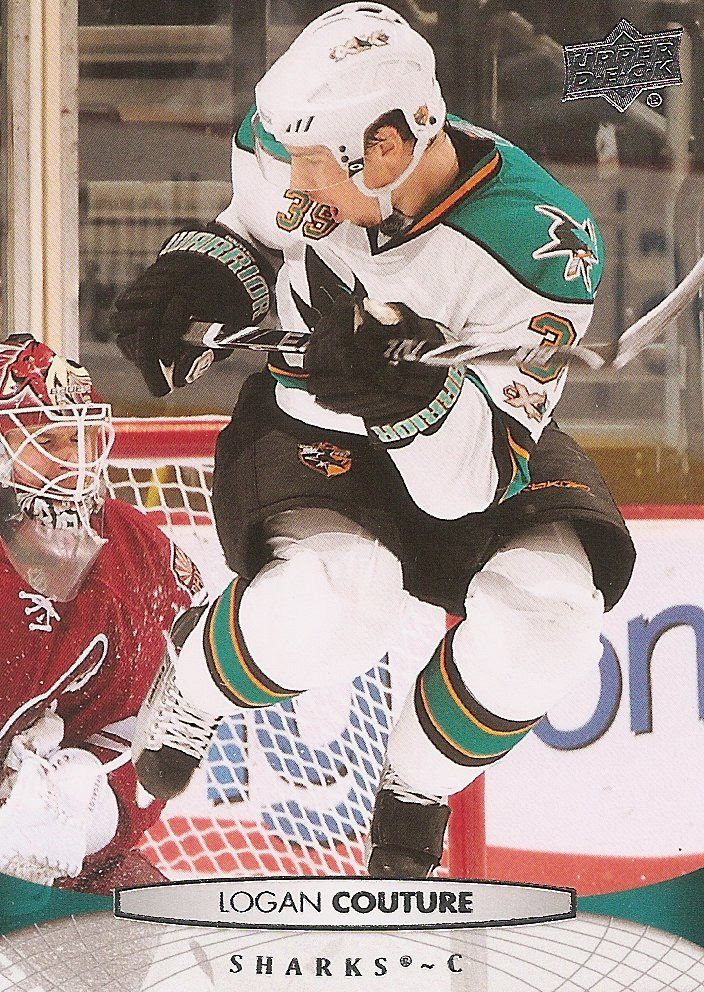 Base Card Design -
Upper Deck has always been known for their beautiful base card photography.  And this year is no different.  The design of the base cards really give the most amount of space possible for the photograph.  The cards let the pictures do all the talking.  And they are truly is a wonder to behold.  The images captured on these cards are really stunning.  There are a mix of close-ups, action shots, special moments, and candid shots balanced together to make a comprehensive hockey card set.  Just check out these cards! 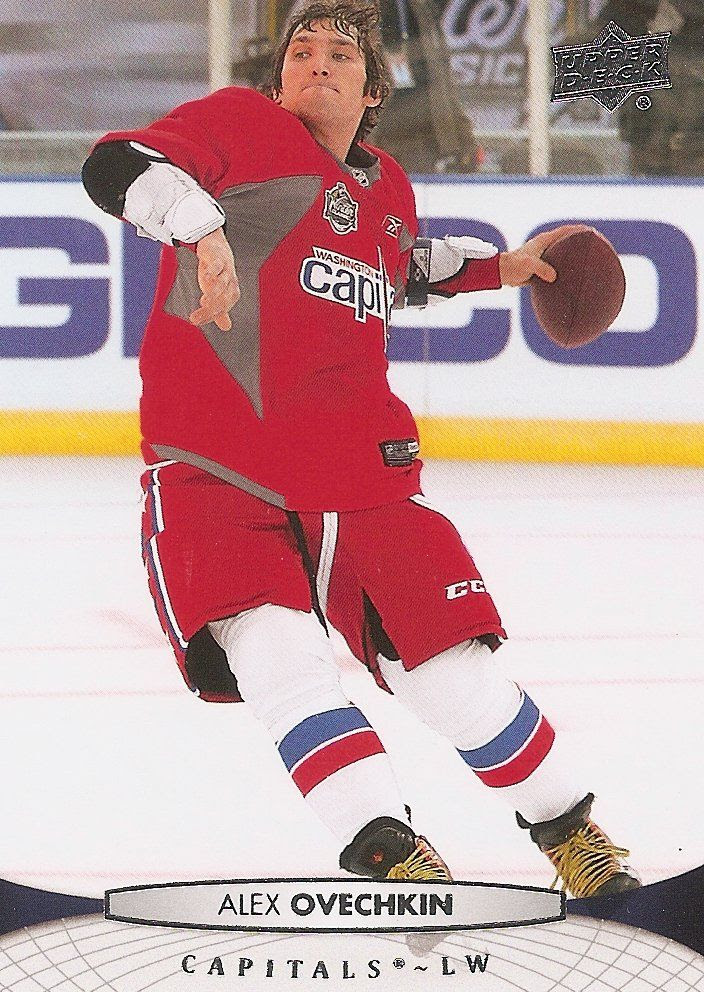 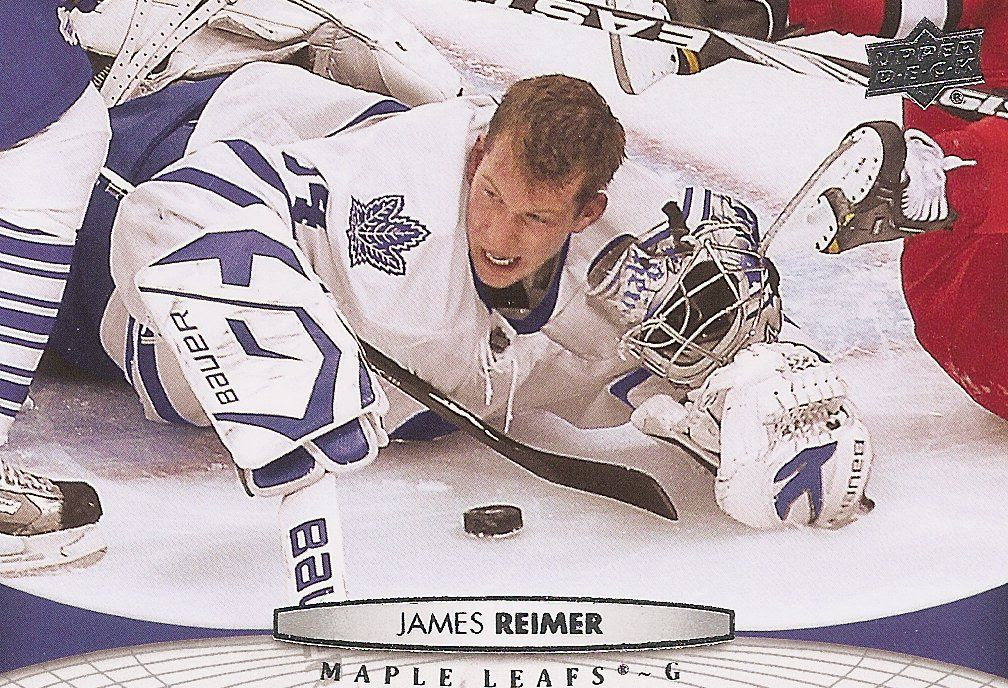 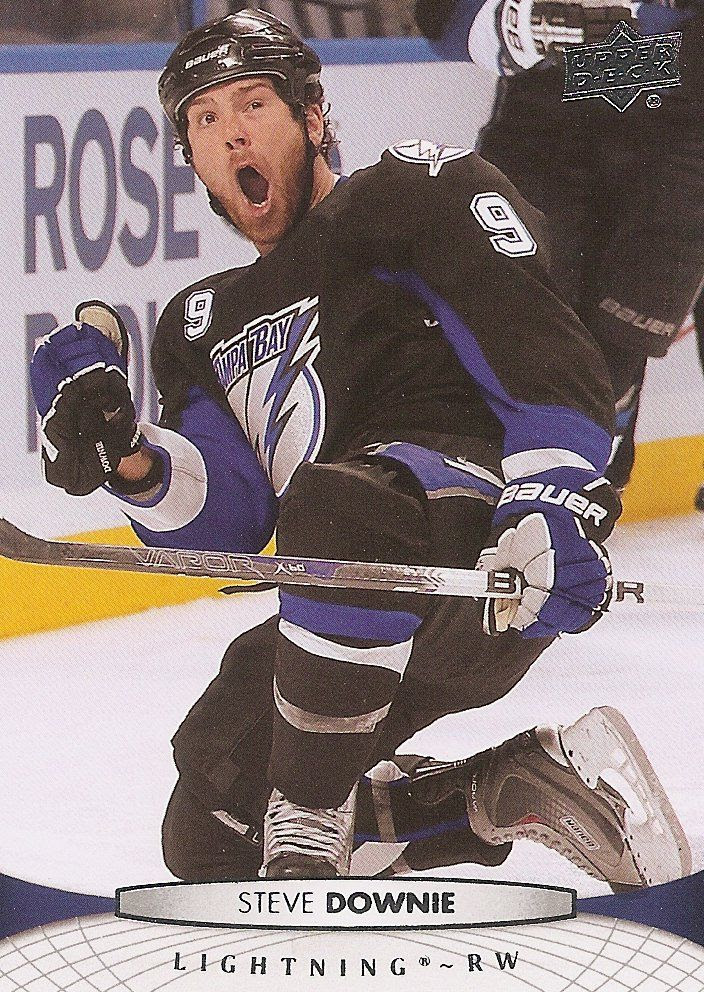 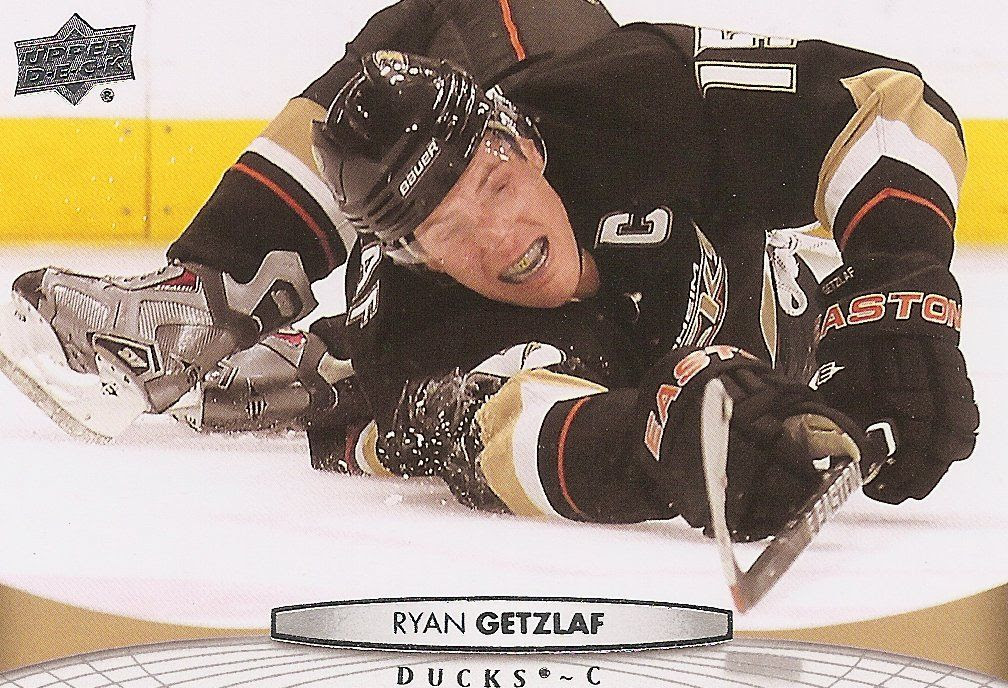 This is one of the Shark's most feared foes?!? 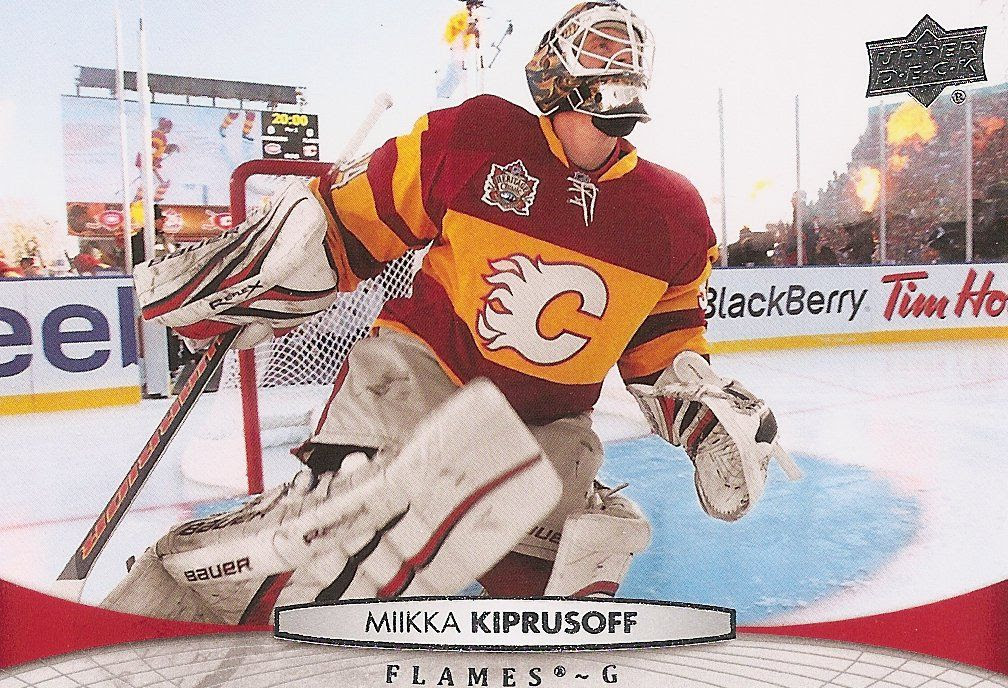 If I were to make one criticism of these cards, it would be the rounded looking 'globe' border of the vertically oriented cards.  This design idea reminds me of last season's Ultimate Collection base cards - which were great, but it just seems a bit out of place here.  And yes, only the vertical cards don't look as good to me.  The horizontal cards look great with this design. 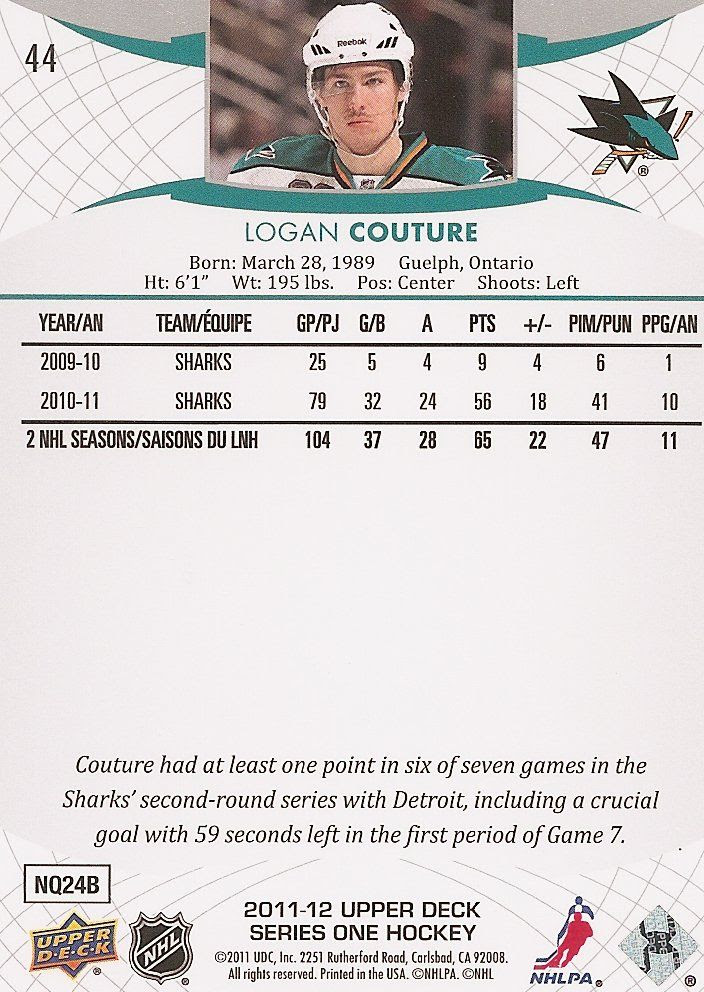 The back of the card is very cleanly laid out as you can see.  The top of the card features an alternate photo of the featured player.  There is plenty of room for statistics and even a small paragraph of information for players who's stats don't take up the entire back of the card.

As usual, the hottest cards to come out of UD Series 1 are not the jersey cards, parallels, autographs, or other inserts... the hottest cards by far are the Young Gun rookie cards.  It's amazing that these non-numbered, non-autographed cards are so popular and sought after, but they are, and it's a fact: they defy the laws of collectibility. 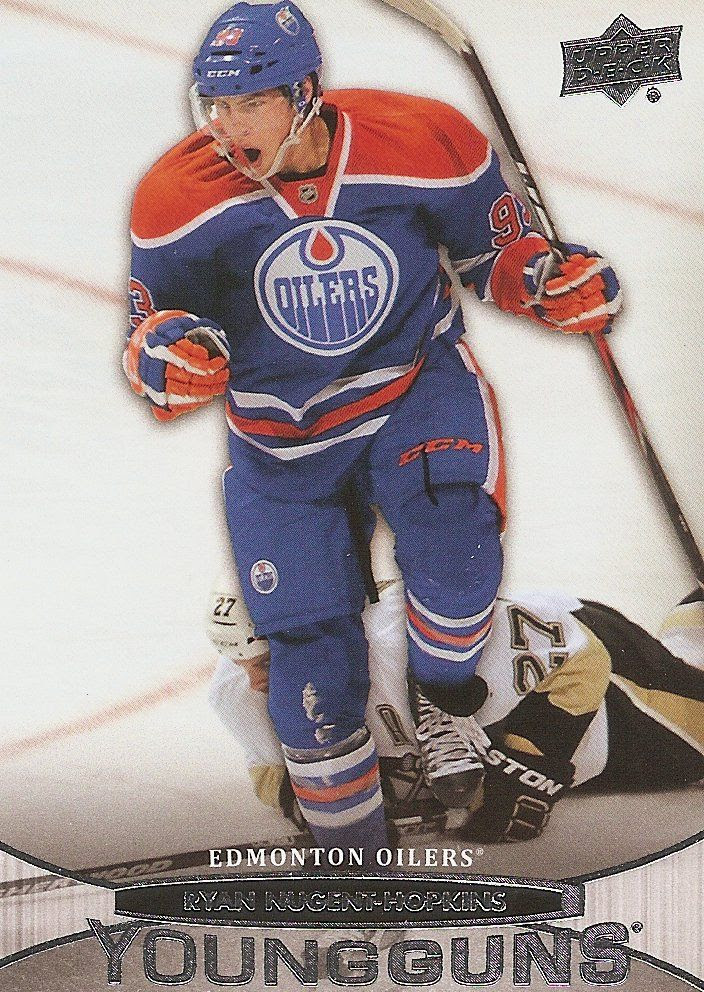 Each year I look forward to seeing what UD comes up with in terms of Young Gun design.  I've really enjoyed the look of the past few year's Young Guns - the classy curves of 08/09, the quasi-futuristic lettering of 09/10, and the western-looking 10/11 cards.  This year's look... is well... it's just... it's... sort of bland.  In fact, these YGs have designs that look very similar to the standard base cards.  It might be that UD is trying a more uniform set this year, and that's fine, but this year's design just doesn't get me excited about them.  They don't even stand out when searching through a new pack.  You sort of have to keep your eyes alert because of their similarity to the base cards.  I am sure that these YGs will be equally as desired and collected as ever, but this year's design leaves me wanting.

Inserts/Game-Used/Autos -
This year Upper Deck has inserted a few fresh new ideas into Series 1.  The first one I'd like to mention are the Hockey Heroes insert cards.  For years UD has chosen a great player and dedicated a set of cards to them.  It was nice, but it wasn't fun pulling them out if you weren't a fan of the player.  You just end up with a bunch of the same player and you don't really know what to do with the cards. 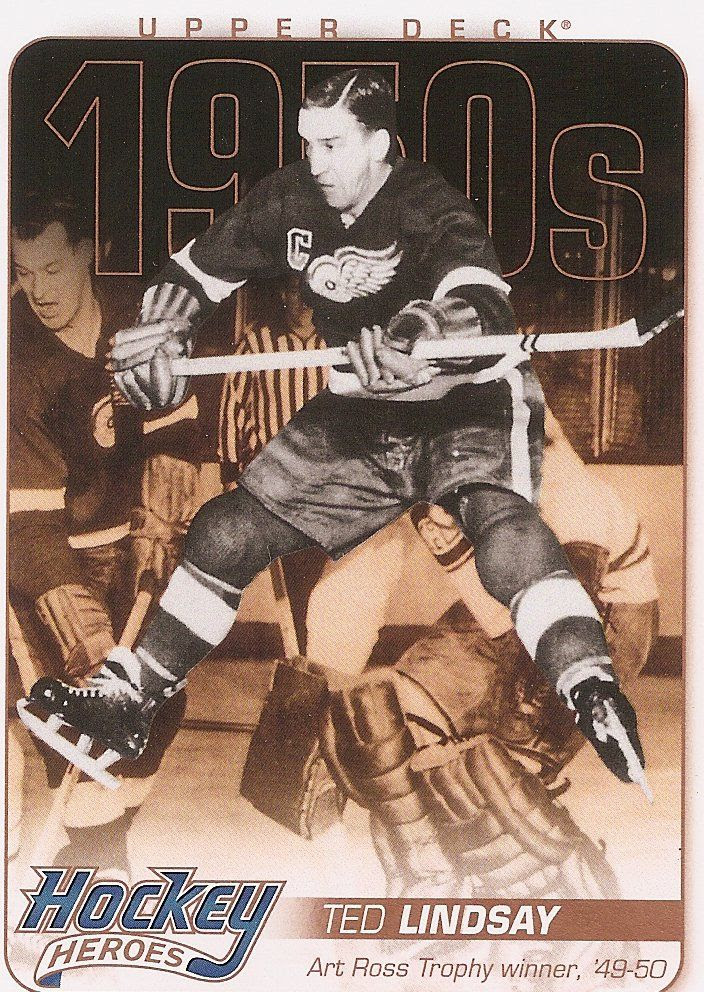 This year UD has decided to dedicate the set to multiple heroes of the 1950's.  It's a wonderful idea and let's you get a variety of players rather than just one over and over.  The cards look fresh even though they feature very old photographs.  If you're really lucky, you may even pull an autographed variation of one of these cards numbered to 15.  There is even a triple autographed Hockey Heroes card to be found!  It'll be great to see if they do a 1960's set next year or maybe even in Series 2. 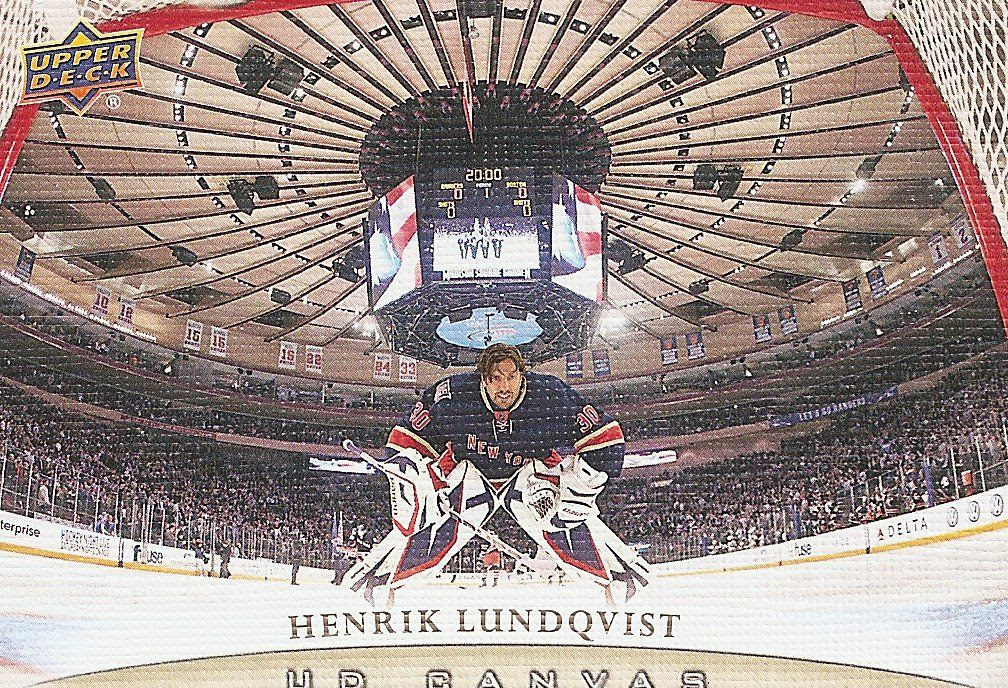 Another new idea for Series 1 are the UD Canvas cards.  These cards are a special set printed on textured paper - similar to that of a painting.  Each card is numbered with a 'C' standing for canvas, I presume.  The UD Canvas cards feature even better photography than the base cards, if you can believe that.  I feel that each of these cards is a piece of work, and would look amazing together in a binder.  There are both standard Canvas cards and Young Gun Canvas cards to collect. 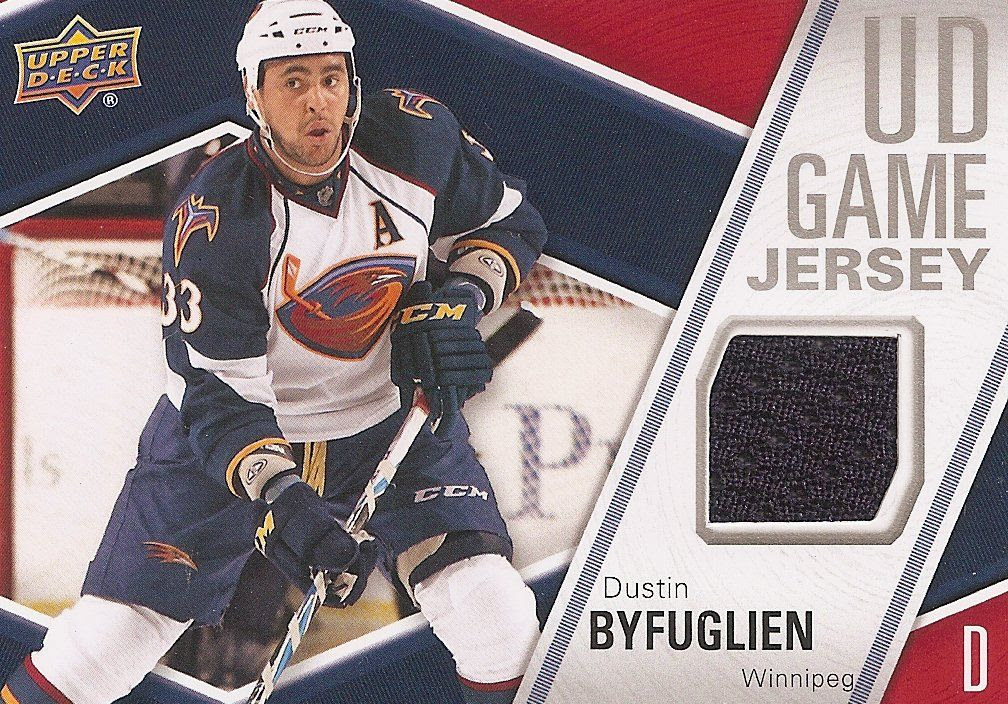 In terms of mainstay UD Series 1 inserts, there are many.  As in previous years, each hobby box of UD1 will come with 2 jersey cards on average.  This year's design is a far departure from the past two year's.  Instead of being very straight forward in terms of design, this year's jersey cards are full of vibrant lines and colors.  So far collectors have expressed positive views of these cards.  I like these cards because it's always fun to be able to pull a memorabilia card out of the boxes I buy.  They can make good trade bait! 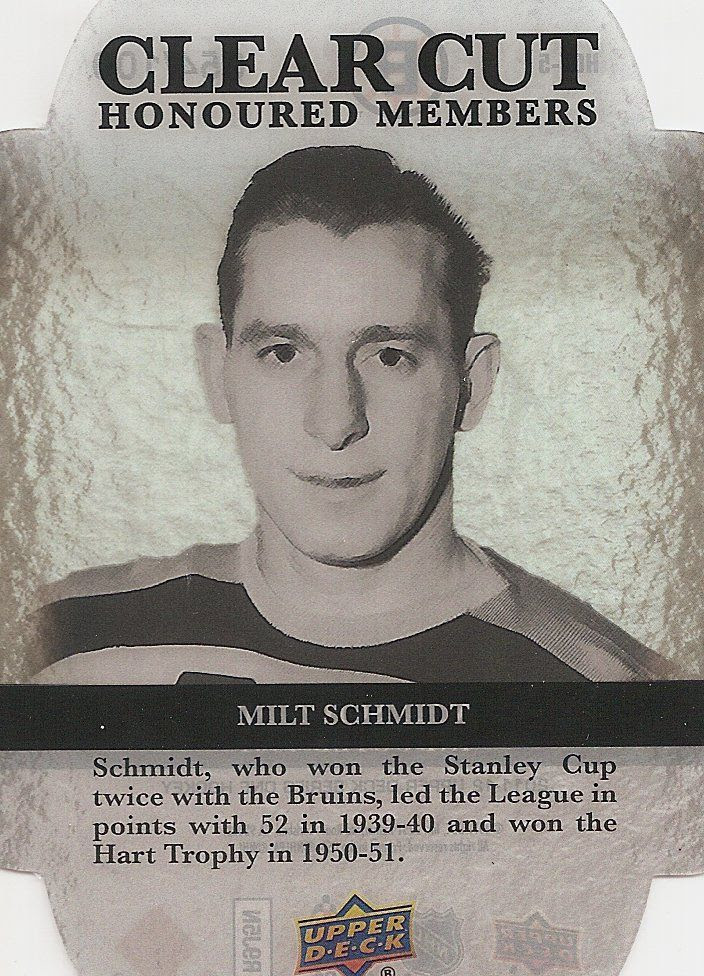 Acetate cards can again be found in this year's UD1.  I was able to pull out a Clear Cut Honoured Members card of Milt Shmidt.  This year's card has a unique design.  The four corners are die cut in an odd shape.  I'm not sure what it's supposed to represent.  Do you have any ideas?  These cards are numbered to 100.  I wish that UD had put more color on these cards.  I understand that they are representing older legendary players, but the lack of color on these cards make them look flat and unappealing. 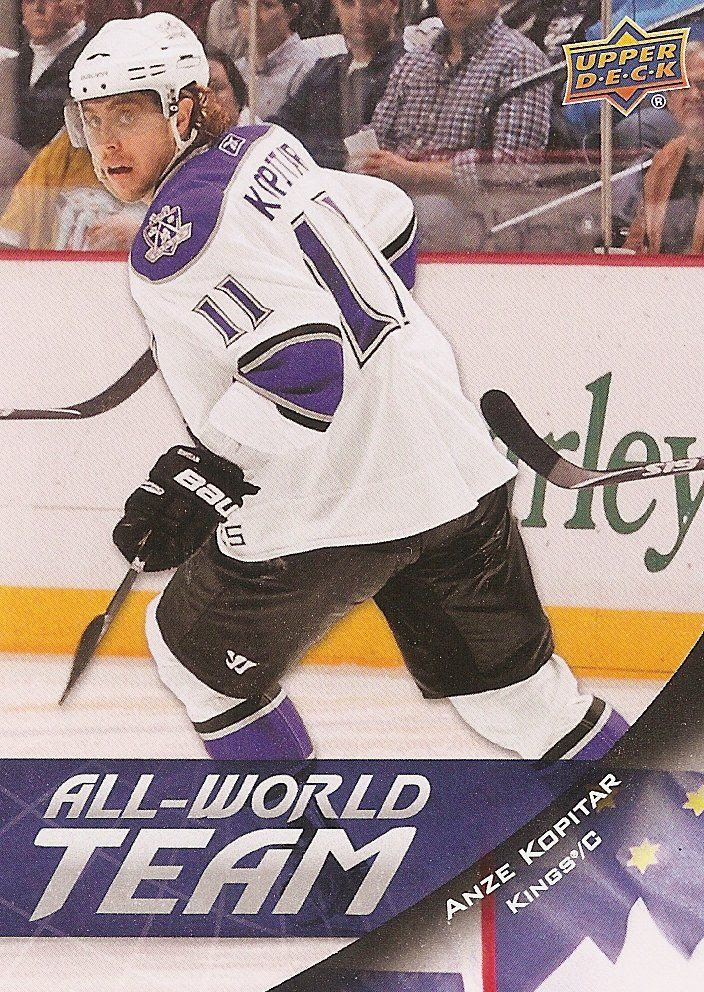 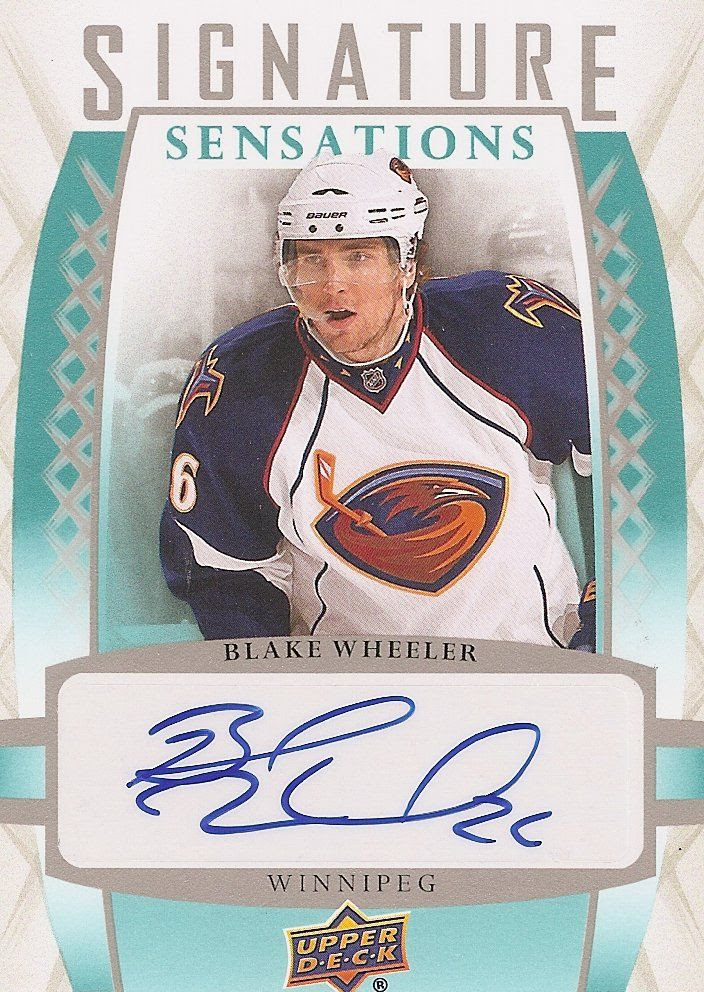 UD Series 1 has other inserts such as Signature Sensations, UD Exclusive cards, EA Ultimate Team cards, and more that can be found.  Most of these cards have been a mainstay in UD1 for some time so collectors are used to these cards.  They are solid inserts that will attract certainly attract player and team collectors.

Overall Rating -
If you're a hockey card collector you pretty much have to buy Upper Deck Series 1.  UD1 is a fantastic product that you just cannot go wrong buying.  Even though I had a few issues with design here and there, I would still not hesitate to buy a box of UD1 whenever I could.  Getting 6 Young Gun cards per box on average is great.  They make fantastic trade bait and are almost always in demand.  It's fun to get jersey cards, and you always have the chance to pull a sweet autograph card as well.  Boxes will run about $70 dollars with packs being about $4.  Yep, the price is definitely right.

Get yourself a box now... duh!


Here's a box of UD Series 1 that I got at D&P Sports Cards in Sacramento, Ca.