It's been out for a while... sorry for the delay my faithful readers... but the review of 11/12 UD Victory is finally here! 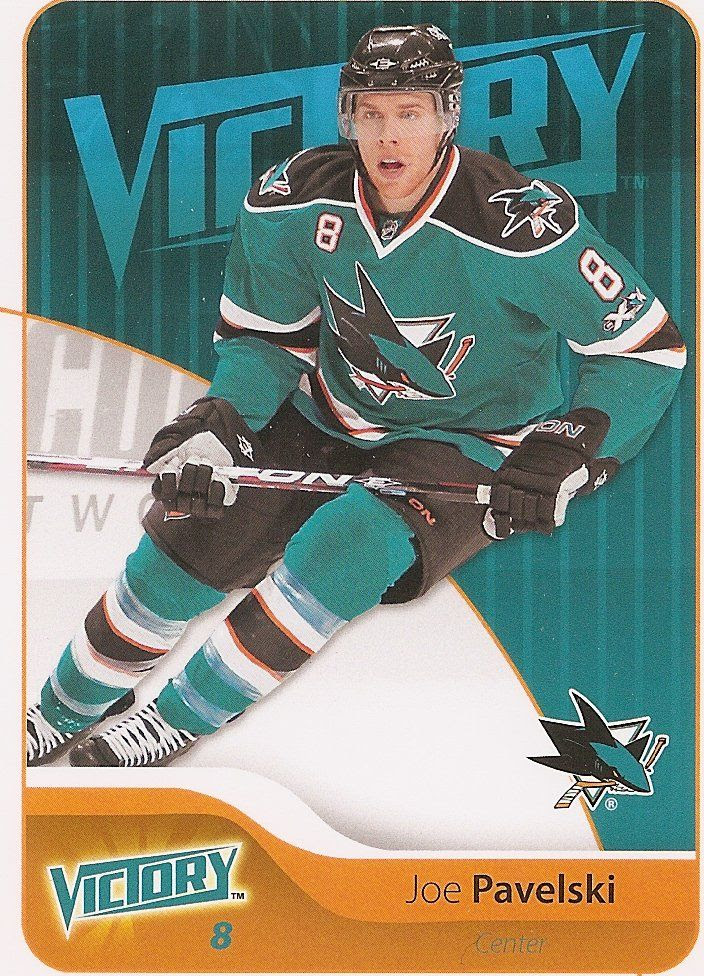 Base Card Design -
The Victory base cards come at you with a crisp and bright design.  The cards make use of the team's colors to create a graphic background.  Each card has a white border that enhances the brightness of the base cards.  As in previous year's Victory sets, this set gives collector's a simple and extremely basic set of hockey cards.  The cards are nice in that they have a glossy and slick feel - no glitz or glam, but fun for extremely young collectors to buy and put together.  They sort of remind me of modern Topps baseball cards without all the inserts - they just have that same feel to it.  Too bad the base set really isn't that large.  It would have been nice to have a wide player selection for this lower (heh... lowest) end set.  I guess they saved all those players for O-Pee-Chee. 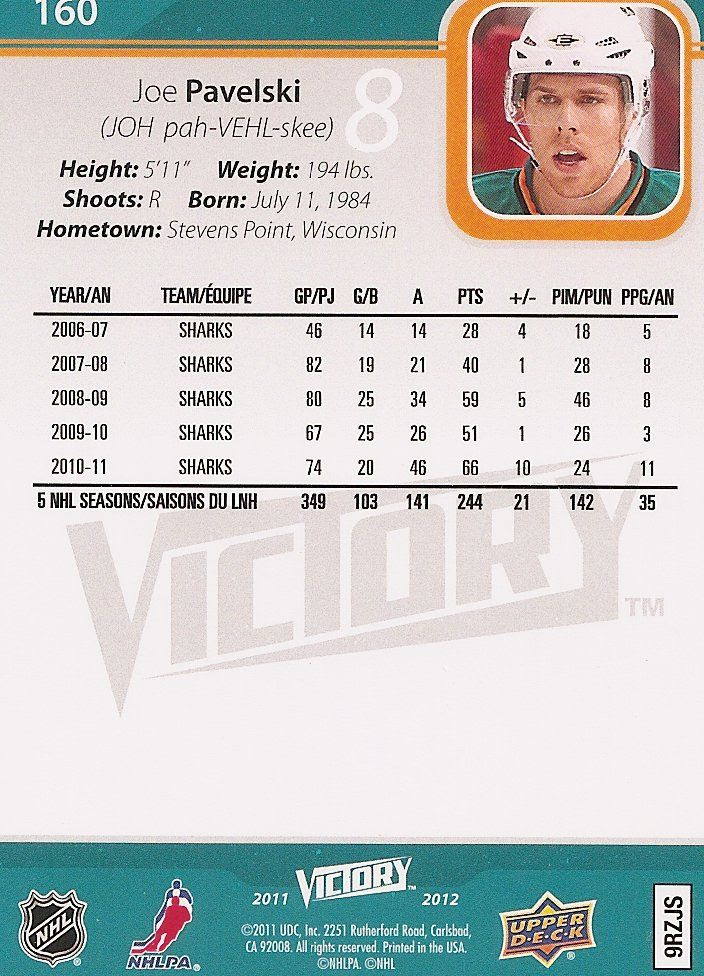 The backs of the cards are nicely done.  They give a complete set of statistics amongst a full color backdrop.  Probably my favorite thing about the Victory card backs is the little part under the player's name.  Here you will find how to pronounce the player's first and last name.  This is a GREAT feature for hockey cards!  I wish more sets would have this handy little tool. 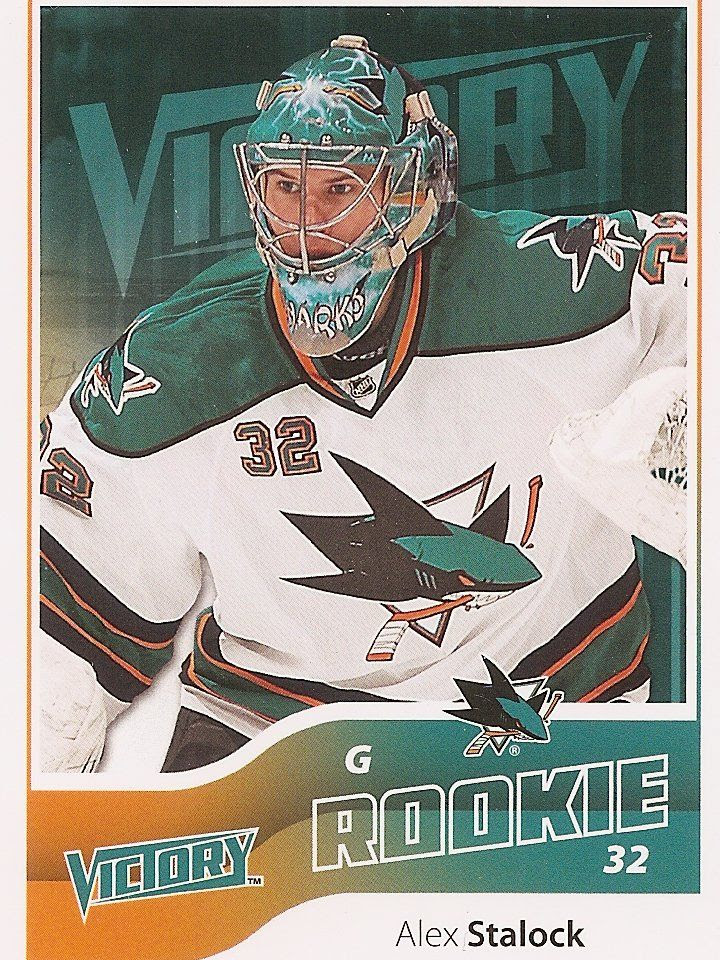 The Victory rookie cards fill out the end of the Victory base set.  The design is slightly different than the standard base card, but doesn't stray too far from it.  They share the same white border and features the team's colors in the background graphics.  The word 'Rookie' is displayed above the player's name.  The images of the players are more tightly cropped inward than the regular base cards.  I like this look as it makes the player feel more prominent on the card.  Overall though, I think the rookie cards are too similar to the standard base.  They just don't have much that sets them apart from their base card brothers.

Inserts/Game-Used/Autos -
Inserts? Yes! Game-used cards or autographed cards? No!  Victory is just about as bare-bones as you can get with a release of hockey cards.  There are a few inserts to chase in Victory, but the thrill of getting a player signed card or piece of memorabilia is non-existent. 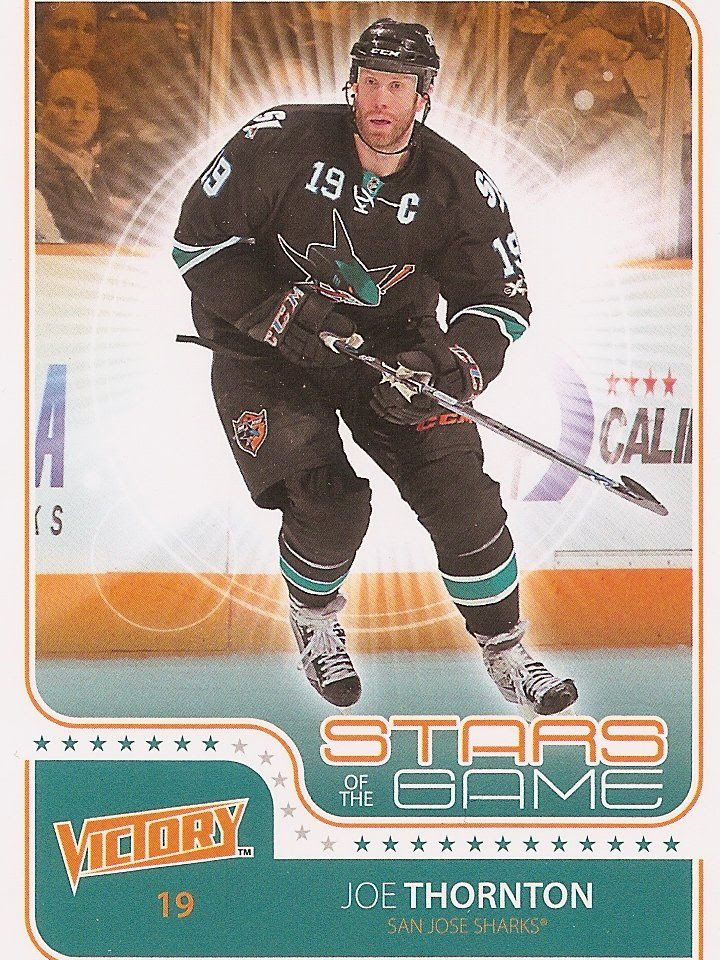 I guess in order to increase the amount of 'star' players you can get in Victory, Upper Deck decided to insert Stars of the Games into packs.  These insert cards have absolutely no difference in terms of feel from the base cards.  There is no textural difference... no foil... no extra thickness... nothing.  In fact, they share many of the same features as the standard base card.  It has the same glossy finish, white border, and matching team colors in the background.  I wish this was not an insert - there would be no difference in having this as a subset within the main base set.  Instead, getting one of these could take the spot of a rookie card.  And I'd much rather have the chance at a rookie card than one of these. 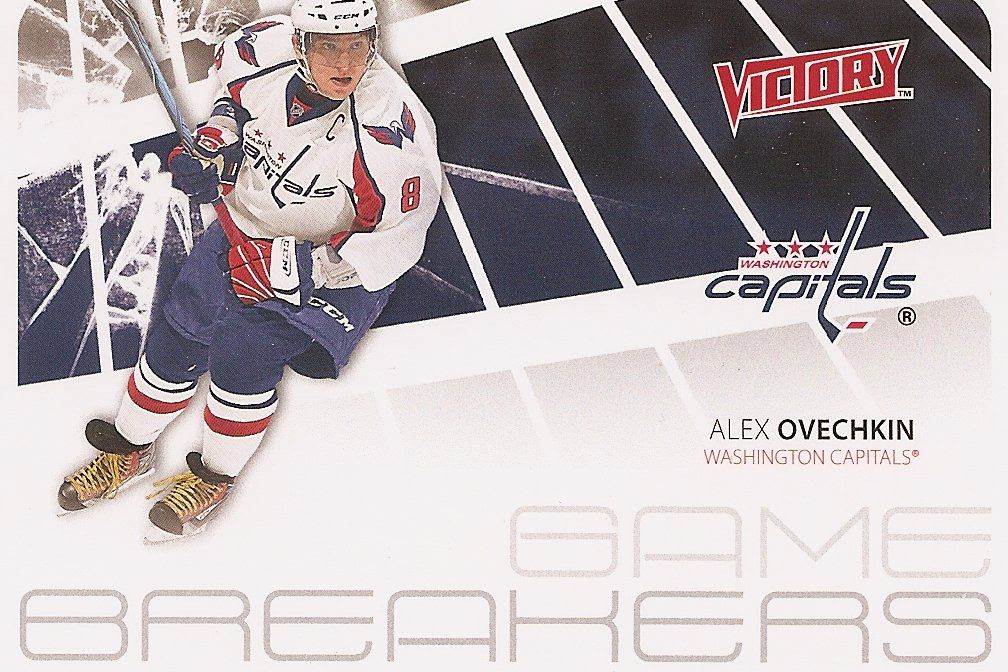 The Game Breakers insert is only slightly better than the Stars of the Game insert set.  These cards feature a horizontal look, but again they just add in the opportunity to pick up extra cards of NHL stars in packs.  I can't imagine anyone being too thrilled to get one of these other than a very young collector.  I remember that last year's Game Breakers design was actually pretty different from the standard white bordered card.  It featured a full-bleed border that made the cards stand out from all the other Victory cards.  No such luck with this year's crop of Game Breakers.  Unfortunate. 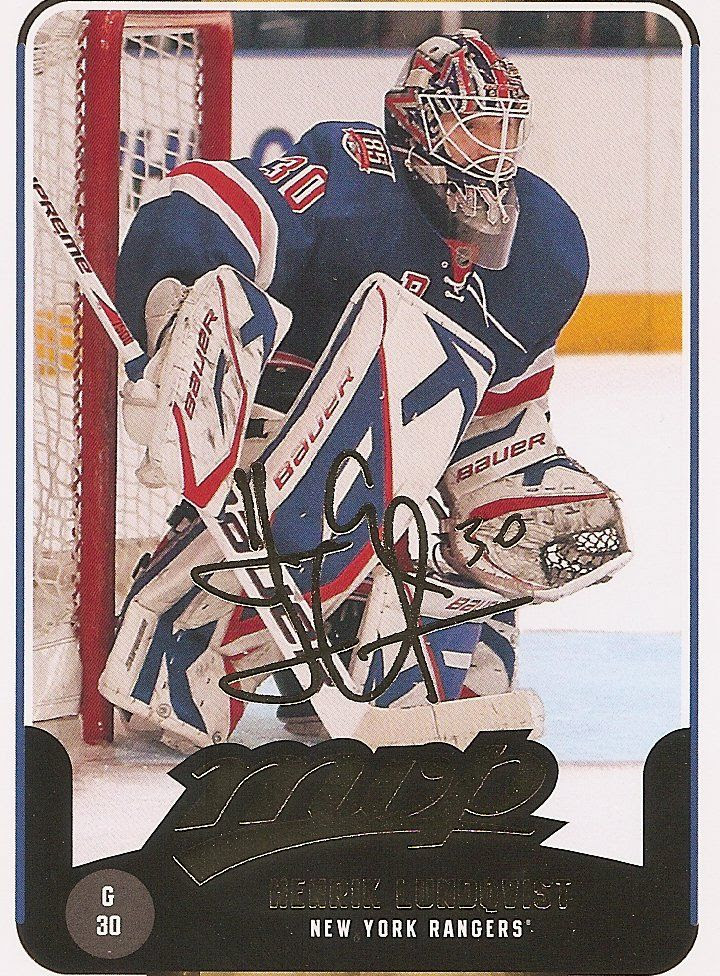 One major difference this with this year's Victory is the inclusion of MVP base cards and rookies.  MVP was Upper Deck's low end sets when it was the only maker of hockey cards a couple years ago.  MVP was a mildly collected set that offered some nicely designed cards, interesting inserts, and an opportunity to get game-used cards.  MVP was taken out of the UD line up last year, but now the base cards and rookies are back as inserts in Victory.  The MVP standard base cards are actually pretty good looking cards.  They feature action photos of the players and a faux gold foil autograph on the front.  The foil on the MVP base insert cards give the cards a great textured feel.  The use of golden and black tones actually make the MVP cards feel quite a bit more premium than the Victory cards.  It makes me wish UD chose to go with MVP as their low end set rather than Victory. 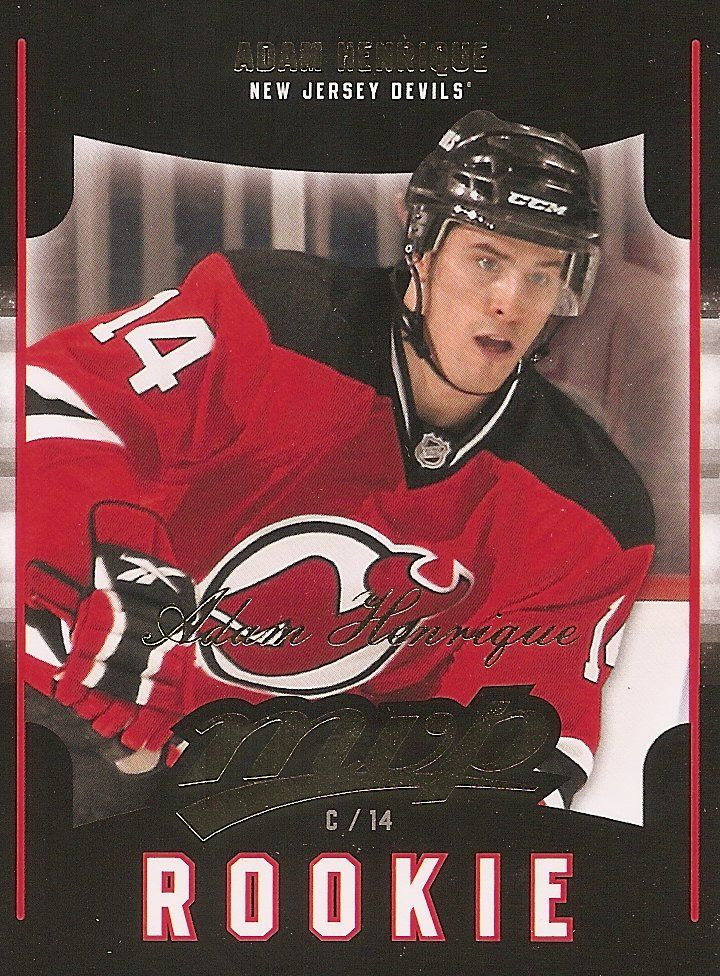 The best looking cards that you can get in Victory this year in my opinion are the MVP rookie cards.  These cards look absolutely stunning.  Having the entire card black gives the cards and aggressive feel.  The gold foil and scripted name look very classy.  I am absolutely loving what these cards look like, and I so wish that these cards were harder to chase so that their values would be more.  These cards come about 2 per hobby Victory box.  It makes me wonder if Upper Deck will release an MVP rookie of players like Ryan Nugent-Hopkins in a future release.  I really hope so!

Lastly, Victory has 2 parallel version this year - the red and the black.  Gold is out.  Red bordered cards can only be found in special fat packs of Victory.  They are pretty abundant and finding your favorite player should not be too difficult.  I like the red border on the card; anything to take away the white border is a plus for me.  And again, black bordered Victory cards are extremely rare.  These cards come about one per case... good luck pulling the player you want from a pack.  And yea, finding your favorite player's Victory black card on eBay can be a challenge as well.

Upper Deck certainly takes advantage of Victory's early release.  I guess people would buy Victory to get their hands on the first cards of the new hockey season, but I can't really see another reason for getting Victory.  For most collectors, Victory does not offer a whole lot.  A box of Victory will yield a big stack of base cards, some inserts, and some rookies.  There is a chance that the rookie card you want won't even be in the box you get.  I know because that happened to me with my box! &%$#@%!

My advice would be to look elsewhere for your hockey card fix.  OPC is already out and that product's price point isn't too much more than this one's.  Soon Panini's Score will come out, and it looks like that product (which has the same price point) will once again be head and shoulders more collectible than Victory.  Sorry to say, Victory needs to be re-booted and re-tooled if UD releases it again next year.