Another early season release from Upper Deck!  This time the focus is not on the current crop of NHL players... With Parkhurst Champions, Upper Deck combines bits and pieces of past products to create a set with tons of retro appeal. 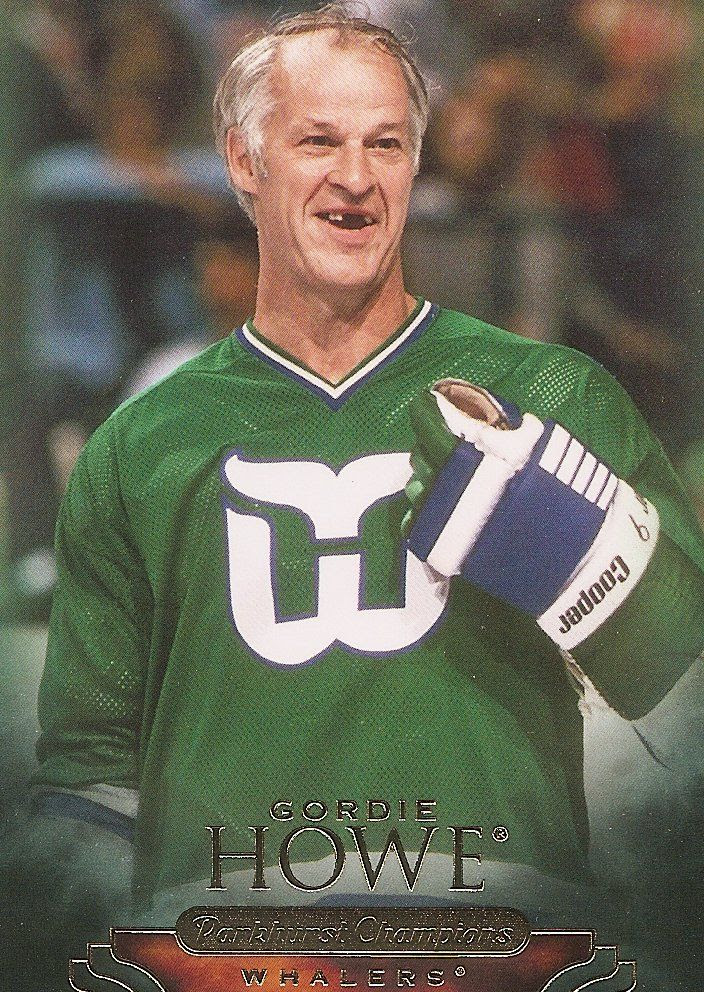 Base Card Design -
The main set of Parhurst Champions comes in three forms - a basic card, wire photos, and renditions cards.  The basic cards in Parhurst are numbered from 1-100 and feature legends of the NHL.  You'll find players like Wayne Gretzky, Bobby Orr, Gordie Howe, and Basil McRae... yep... only the most household of names here!  haha.  Kidding aside, the players from 1-100 are great players - even though some may not be as familiar.

Upper Deck has given the base cards a fairly modern feel for such a retro themed set.  Each card is full of shiny gloss and features tasteful foil touches.  The cards are surrounded by a faded forest green border that reminds me a little of a fancy old mansion's furniture.  I have to say that I am not a fan of the border.  Tacky.  Yes, tacky is the word.  I think the base cards can't decide if they should be modern or retro, and end up being stuck in some sort of retro-modern middle ground.  They aren't terrible, but this design just doesn't resonate with me. 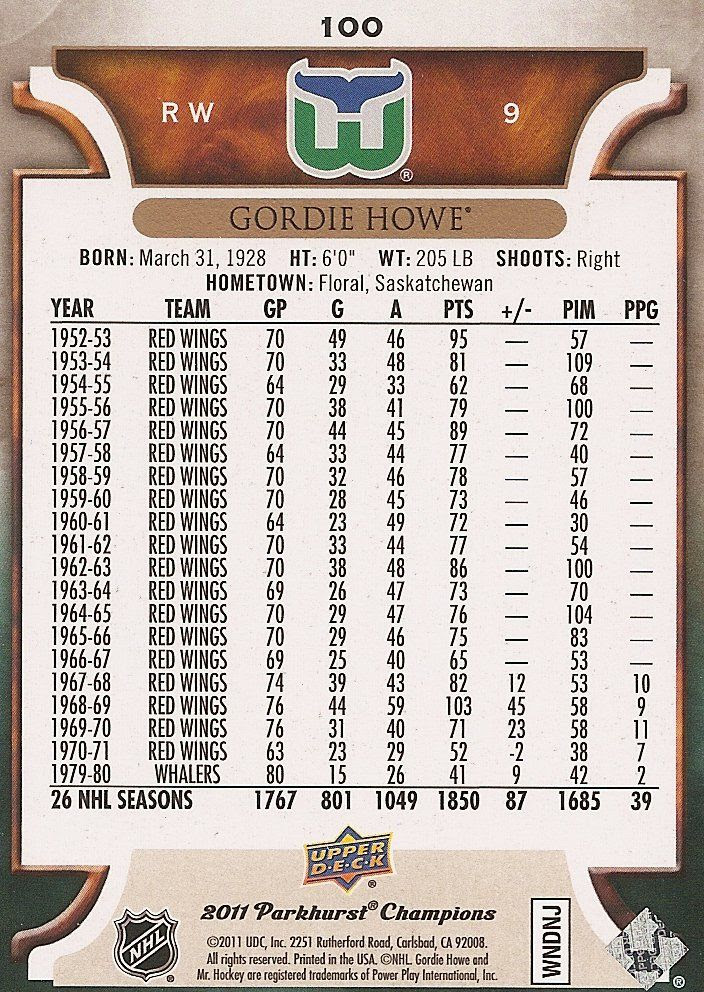 The backs of the cards are simple and feature full career stats.  They stick with the basics and don't add too much else.  Players with stat lines that don't fill up the entire card have a short informational paragraph written about them to fill out the rest of the backside. 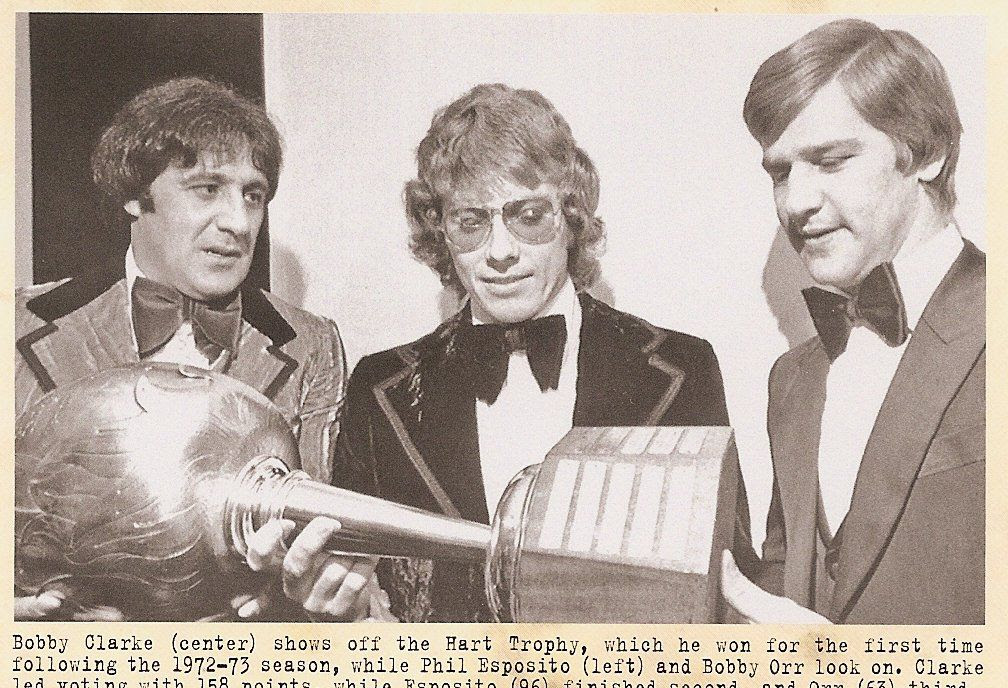 Following the standard base cards are the wire photo cards.  These cards are inserted at a rate of about one in every five packs.  In my opinion, these are the gems of the entire set.  The wire photo cards are black and white photos set on an off white background.  A short description in old typewriter font is below each photo.  It was so exciting to pull these cards out of the packs.  Unlike the standard base cards, these ones hit you hard with the nostalgic retro feelings.  Upper Deck has done these RIGHT, and they are great cards to have.  Absolutely perfect for a set like this. 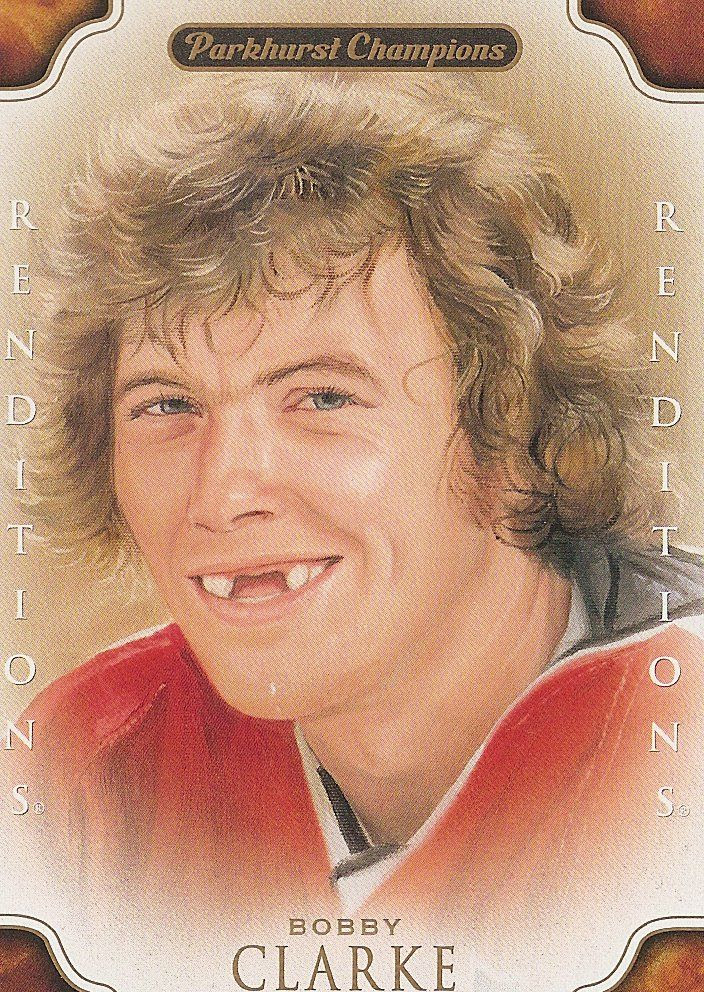 Finishing off the main set are the Renditions cards.  Both black and white as well as color versions are in the set.  These cards are reminiscent of the UD Masterpieces set that was release a few years back.  The cards show artistic renditions of the players.  Each card I've seen has been done in an elegant way.  I am surprised at how well the paintings nail specific moments or emotions.  The only qualm I have with these cards are distracting extra words and logos on the card.  I could do with a less cluttered front - like the wire photo cards - a more simple design would have worked better here.

Inserts/Game-Used/Autos -
The main draw of Parkhurst Champions are the autographs.  Upper Deck provides you with an awesome opportunity to pull on card autographs of legendary NHLers.  Each of the subsets (base cards, wire photos, and renditions) have autographed variations, and each type of autograph comes in a different tier of rarity.  A box will yield one to two autographs.  In the two boxes I have opened, one had just one auto, while the other had two. 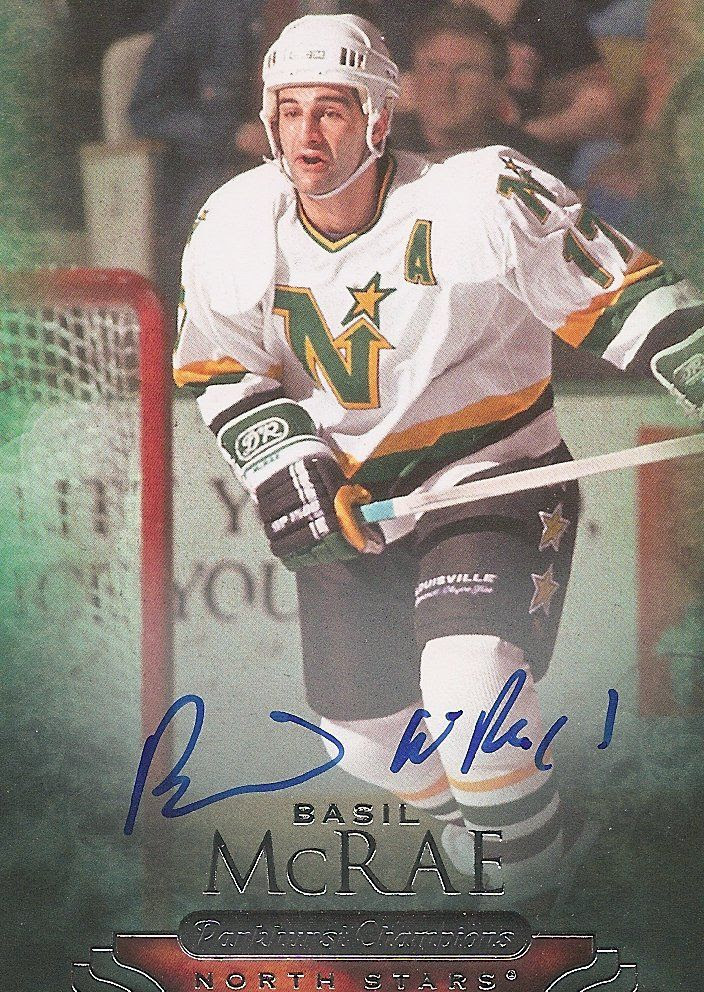 The most basic autograph are the base card autographs.  Unlike Artifacts, these cards do not feature the sticker autograph - they are on card, a huge plus for this set.  The autographed base cards are very similar to the standard base card except that the foil on the front is in silver rather than gold.  And the back of the card has a congratulations message instead of career stats.  The base card autographs can be a little hard to see because there is not spot for the players to sign.  They just sign over the base card picture in blue ink.  With an already dark card, it is possible to even overlook the fact that a pack may contain an autograph.  But I'm sure most savvy collectors would catch them in their packs. 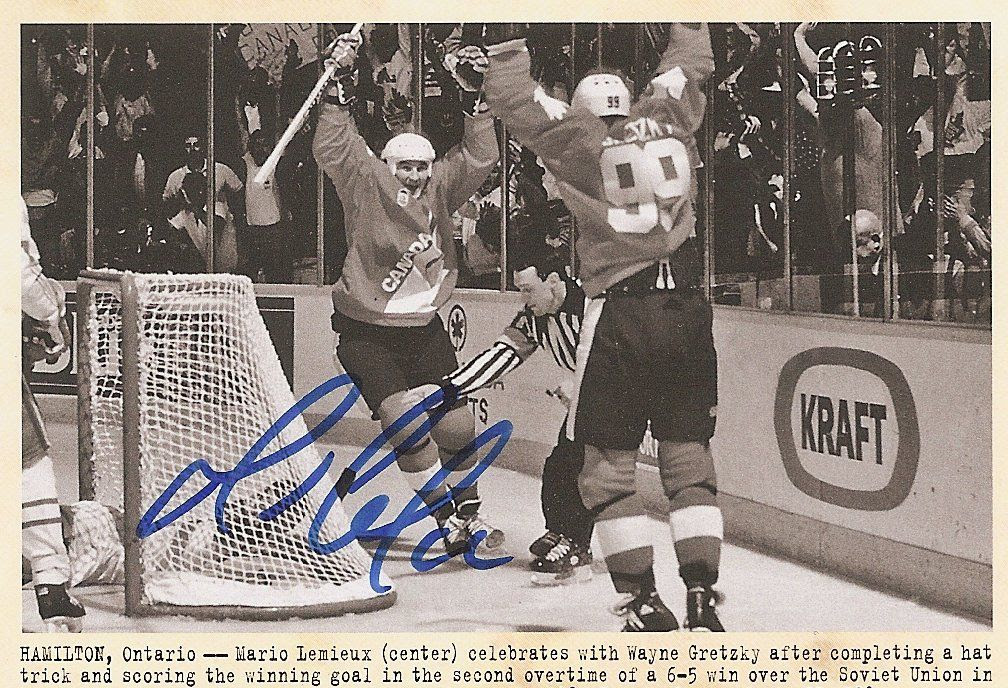 Wire photo and Renditions cards can also be found autographed.  Finding one of these cards in a box can be quite a challenge though.  According to the ratios stated on the Parkhurst box, the best odds of a wire photo autograph is 1:500.  Wow, that's pretty tough.  And yes, the ratios just get higher from there.  Pulling one of these cards is  an awesome treat though.  The autographed versions of these cards are stunning, and I am sure that collectors will clamor over these.  Some wire photo autographs even feature multiple player signings - how awesome is that?!?!?!? 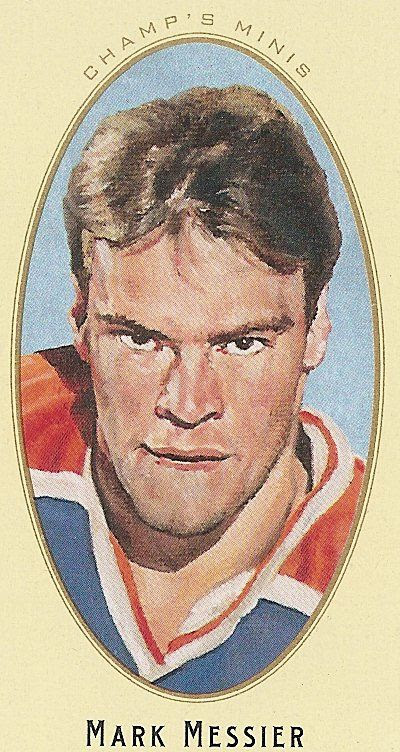 Mini cards make a return in Parkhurst Champions.  Upper Deck has produced mini cards before in hockey as part of their Champs line.  The mini cards in Parkhurst are simply designed and look good.  I am not personally a big fan of mini cards only for the fact that they can be hard to store.  It's a fun concept though, and collectors can have fun trying to chase down all the different variations of the minis.  Minis come in all sorts of flavors - different colored backs, auto'd versions, short prints, and more.

And one last thing... the fine folk at Upper Deck have again chosen to insert redemption cards for fossil and ancient artifact cards.  They are pretty tough pulls.  I know that collectors have mixed feelings about these cards.  They can be fun, but the argument can be made they aren't really hockey related, so they are not necessary.  I'm on the fence about these cards.  I guess I wouldn't mind pulling one.  They are certainly unique.  But I wonder why UD chose to put these cards into this particular set.  I mean, what are they trying to say?  NHL legends... fossils... relics... hmmmmmmmmmm. Tsk tsk UD!

Overall Rating -
Parkhurst Champions comes at collectors with a strong showing of legendary NHL players.  From a product standpoint there are some really great aspects to these cards - the foremost being that collectors can get hard signed cards of some really great players.  Wire photos are also a good reason to get some of these cards for your hockey collection; they are one of my early season favorites in terms of design.

The only drawback I see in this set is the difficulty at which it is to pull the best of the best.  A box will cost around $75-$90 USD, and there is a good chance that there is only one autographed card in the box.  It can be very hit or miss.  Pack prices are pretty low, but again, only one of those twenty packs will yield an autograph or two.  Certainly a risk to weigh when buying Parkhurst Champions.

If you're into the NHL legends, I would recommend giving this product a try.  Perhaps a case would be in order.  For more casual collectors, buying a box or two to try out is a fun proposition that could snag you a sweet auto... or even a dinosaur bone!