This year I want to review more ITG products.  ITG is a legitimate player in the hockey card world even though they don't have an official NHL license.  They make great cards that are revered by some collectors.  I'll be very interested to see what they've got this hockey card season! 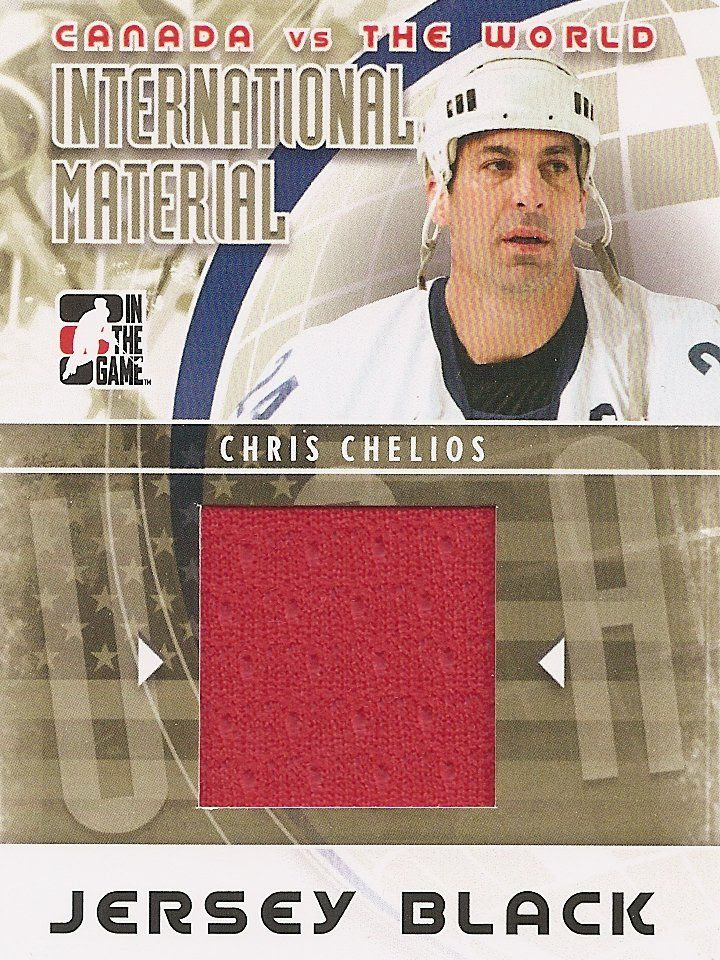 Insert Card Design -
The Canada Vs. The World (CvW) is a product similar to their Decades 1980's release.  The cards come in a box of 9 cards.  There is no regular base set as all the cards are regarded as 'hits'.  For the purposes of this review, I will review the non-autographed or game-used cards in this section and save the memorabilia cards for the next.

The first insert card I received in my box was from the 100 Years of Hockey Cards set.  These unique cards feature painted images of great hockey players from the past century.  They are made to resemble old tobacco style cards.  Unlike Topps and Upper Deck mini cards, these cards are not mini sized.  The cards are produced so that they are standard sized with the mini card image sitting within a baby blue border.  I like this decision by ITG because having a bunch of mini cards can be a pain in terms of care and storage. 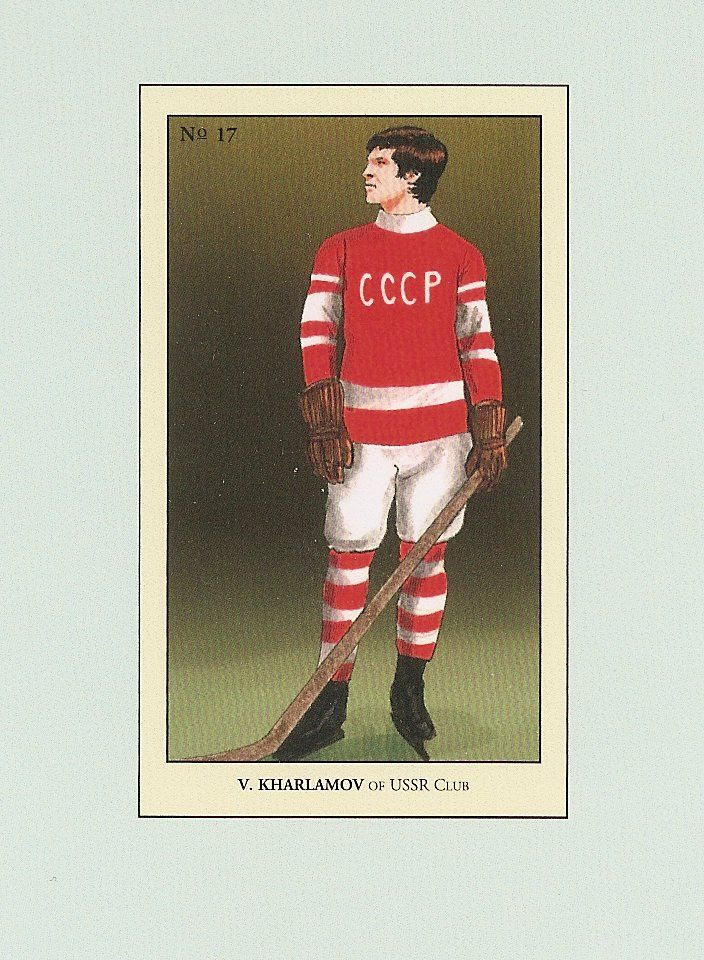 The painted image on these cards look really nice.  The interpretation of the hockey sweater is especially well done.  These cards have a classiness to them in their simplicity.  ITG follows the old style of card information by only putting the player's first initial and last name on the card.  For popular players this is not really a problem... but for the card shown above, it was difficult to know who it was that I had exactly since I am not familiar with older Russian hockey players.  Luckily, I got a second card of the same player in my pack. 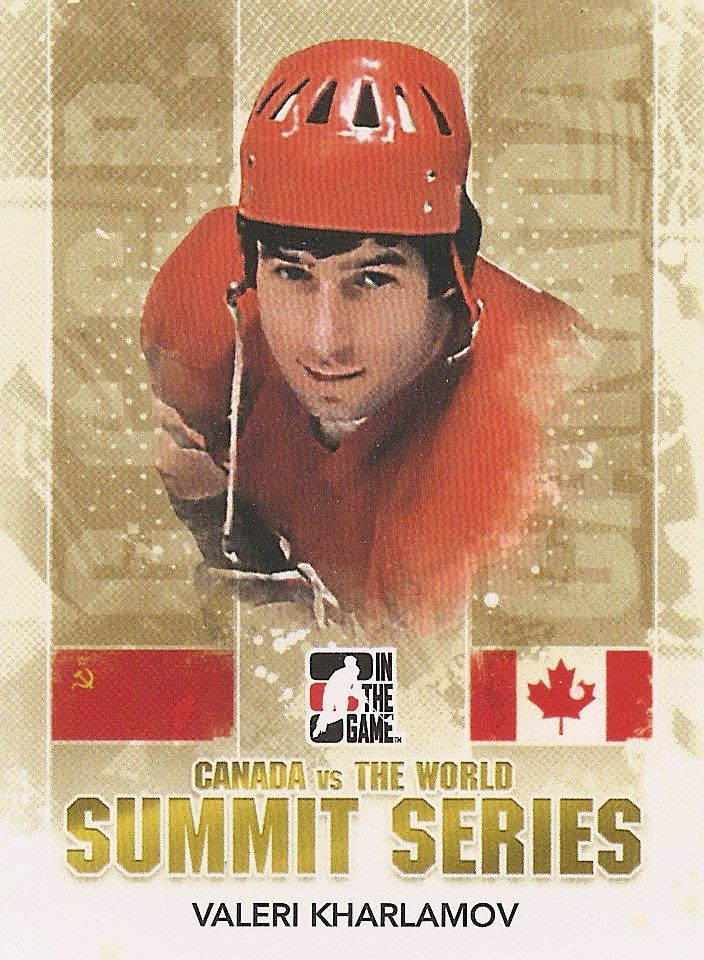 And here it is.  Unlike the previous card, this one features a photo of the player amidst a beige-gold background.  This card highlights Valeri Kharlamov and his role during the 1972 Summit Series between Canada and the Soviet Union.  The card contains a nice write up of his participation in the event on the back.  It's good information that's interesting since I know very little about the Summit Series.  Unfortunately, though the back has great information, the front design leaves a bit more to be desired.  Having the flags of the two nations is a nice touch, but the design of this card falls a bit flat and feels a bit dated.  To me, graphics have a mid 90's feel/quality to it.  If it were up to me (and obviously it isn't), I would have made the flag graphics quite a bit bigger, or simply used the flags as a backdrop rather than the graphics shown.  I just feel that the design could have been more bold. 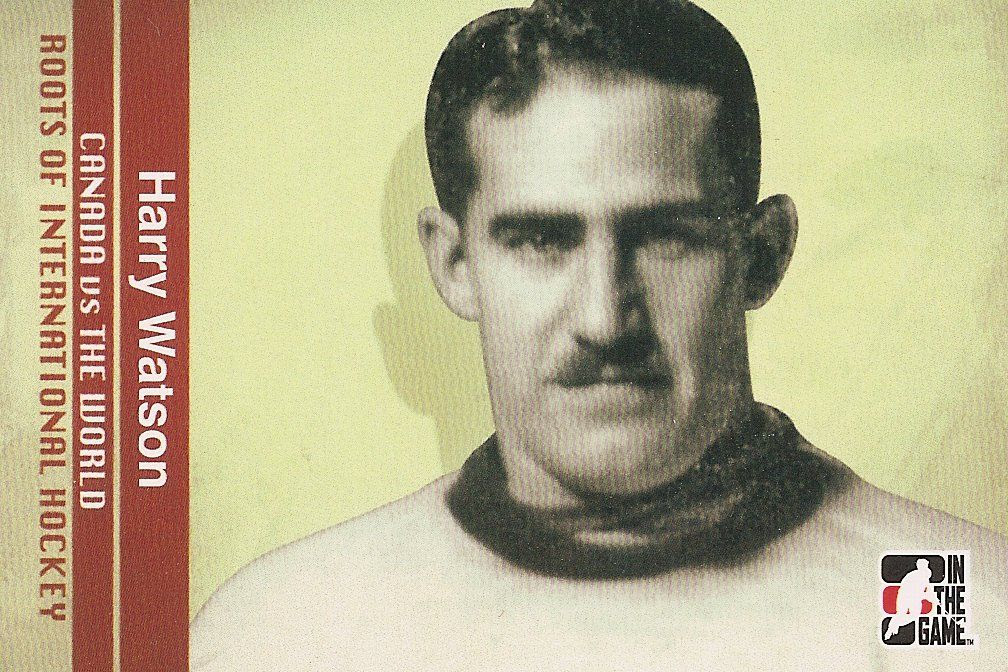 My third and final insert cards is of Harry Watson.  Here we have a very simply designed card.  My feeling is that this card, and cards of this type are to here to present information to card collectors.  This card definitely increases my knowledge of hockey history by reading the back.  There is a wealth of knowledge to be had simply by reading the information.  I do think that from a design standpoint more could have been done to make the card more aesthetically pleasing.  One simple suggestion would be to add red foil where the name is and feature the ITG logo in foil.  That would definitely make for a more premium feeling card.  It may be difficult for companies to add foil to card though.  I've noticed that foil is not commonly used in low or mid level ITG products (and Panini for that matter).  Perhaps the cost would increase too much in terms of production.  Just a guess... I don't know!

Game-Used/Autos -
Of all companies, ITG does the best job with their game-used cards.  ITG does a fabulous job in giving you specific information about the piece of cloth imbedded in the card.  And unlike Upper Deck or Panini, these cards do not come from events - they are from actual games that the featured player has played in.  Each pack of CvW will come with 4 jersey, patch, or equipment cards. 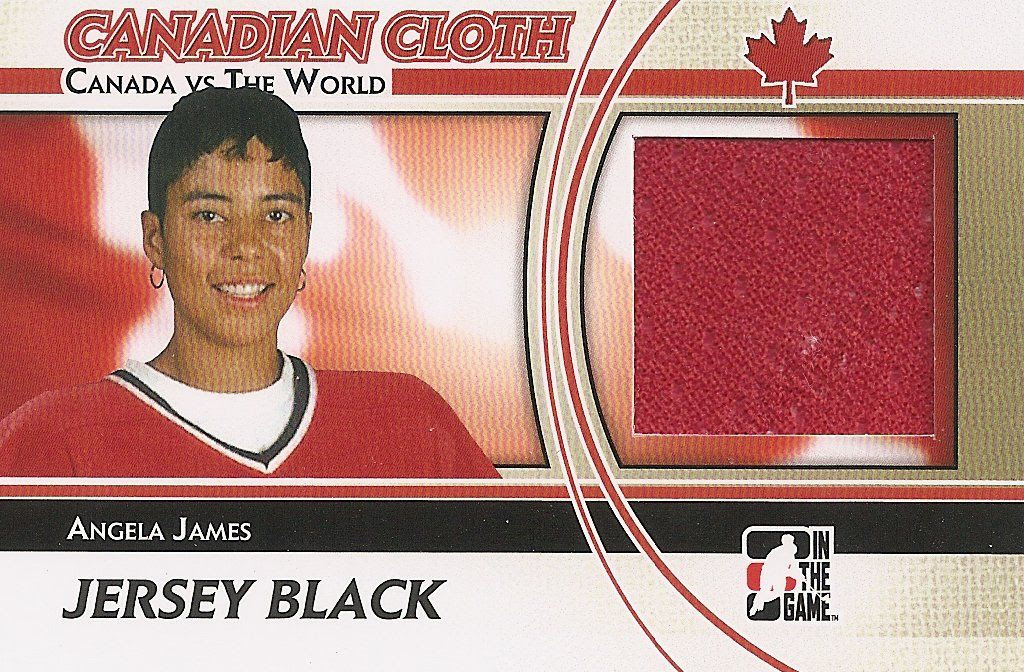 The Angela James card shown above reminds me most of the 'standard' ITG jersey card.  It has a familiar design if you buy ITG on a regular basis.  This card has been upgraded from a design standpoint though.  The colors chosen for it mesh very well together.  Having the red and black obviously represents Canada well, but the hint of gold on right hand side really takes the card up from a design standpoint.  The card is very sharp, clean, bright, and modern.  Kudos to ITG for upping their design edge here. 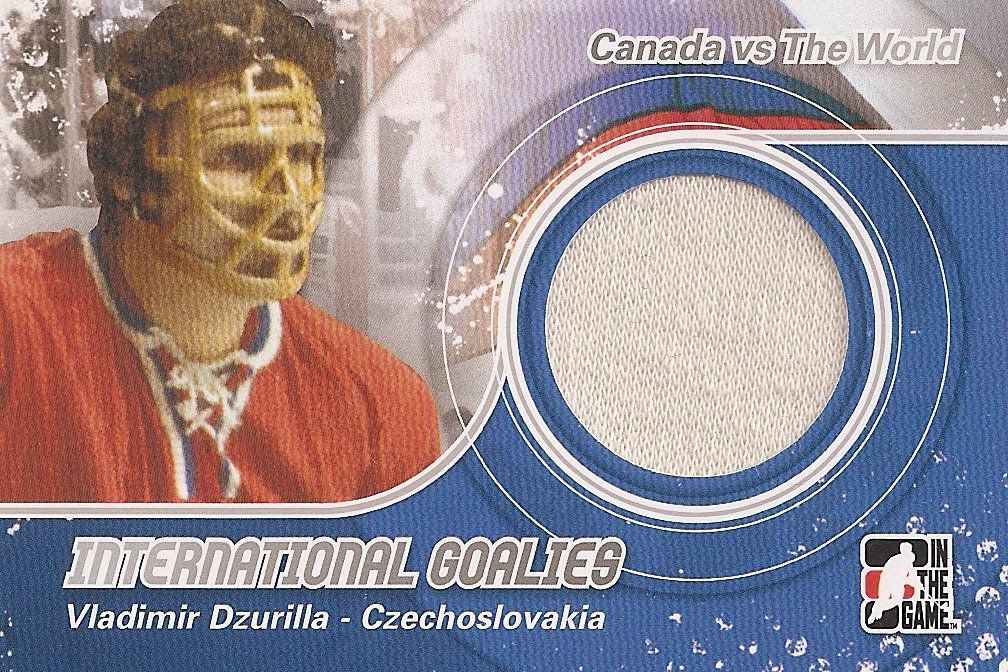 The International Goalies jersey card above is pretty different than the Angela James card.  Here the jersey cloth is in a circular cut-out, and has a very different color pallet that is appropriate for the country he represents.  CvW really nails the national theme and respects each country's colors.  I am sure that hockey fans all over the world would appreciate the work ITG has done to put some national pride into this card product. 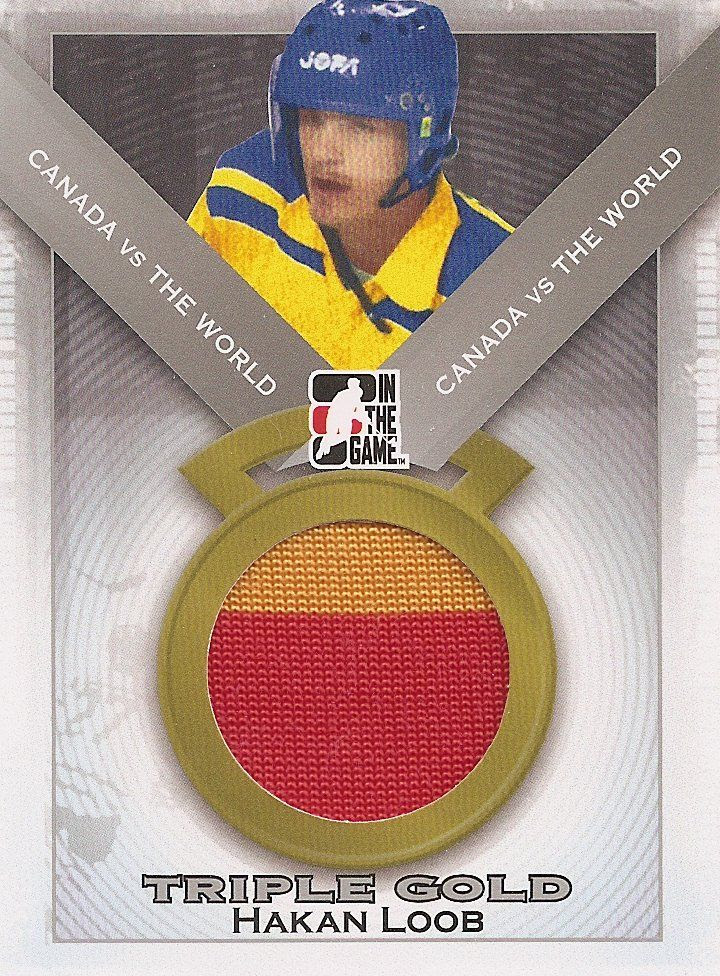 This final jersey card comes from Swedish player Hakan Loob.  It features a vertically oriented design that mimics the shape of a gold medal.  I cannot say that I think this card is spectacular looking, but this is probably my favorite card in the pack that I bought.  The card just has a certain charm to it that I find endearing.  It's a fun design that shows ITG stretching its creativity, trying to come up with new things for collectors.

In terms of autographed cards, each box contains two.  The autographs featured players from Canada as well as the entire world.  You have the possibility of getting players that have retired, who have played for their home countries, and even current NHLers. 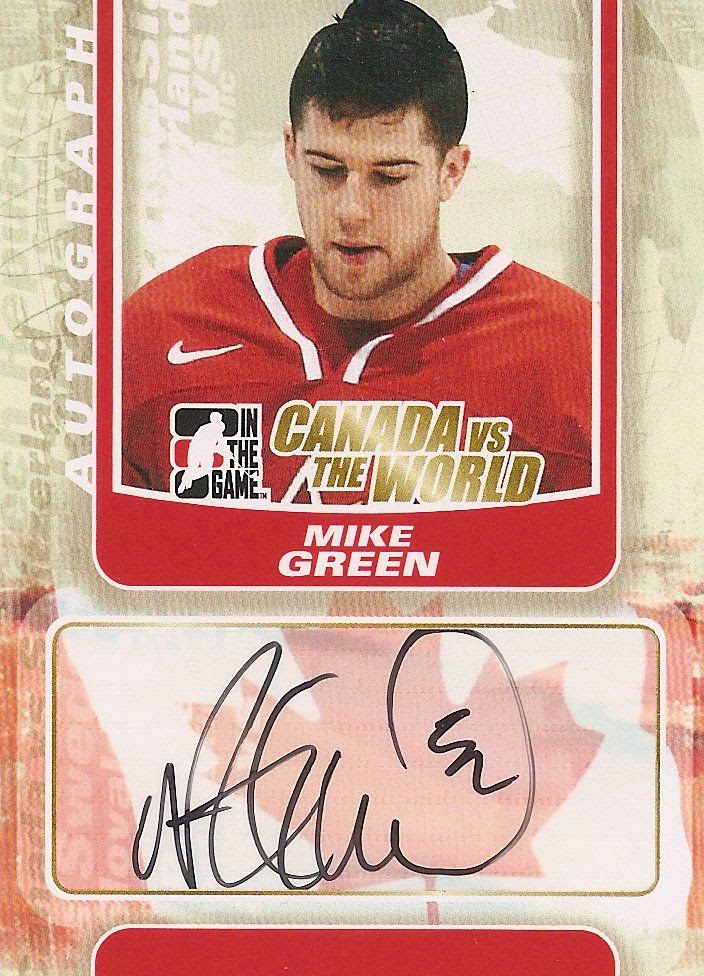 The Mike Green autographed card is typical of what you get in a box of CvW.  I really like that again ITG has gone full bore in decking out the card with national colors.  Here we see Green in his Team Canada jersey and his signature over a Canadian flag.  I am not fond of the background of the card, but it gets the job done.

Overall Rating -
ITG's Canada Vs. The World is an interesting product that will give collectors a variety of content per box.  It is fun to open up a box and find a wealth of international themed cards.  Certainly there is star power to be found in boxes of CvW, but some collectors may not appreciate the variety as much as others.  I would say that for hockey collectors that enjoy Canadian themed products, this is certainly a winner and a must have.  For collectors who want rookies and other NHL stars, it would be a wise idea to wait for less specifically themed products from ITG or other card companies.  Overall, CvW is a strong product out of the ITG factory.  There's a concentrated shot of hits to be had at a reasonable price point.  It's just up to you to see if what's inside is your cup of tea.


Check out my box of Canada Vs. The World!

Email ThisBlogThis!Share to TwitterShare to FacebookShare to Pinterest
Labels: 2011 2012 11 12 ITG In The Game Hockey Cards Card Review Canada Vs The World Box Break