Just done with 10/11 cards and 11/12 cards have already come out!  There is no 'summer break' for hockey cards that's for sure.  Victory from Upper Deck has already been out for a while, but I haven't gotten my hands on any to review yet - when I do I'll post up a review.  For now, we're going to start off 11/12 with Artifacts! 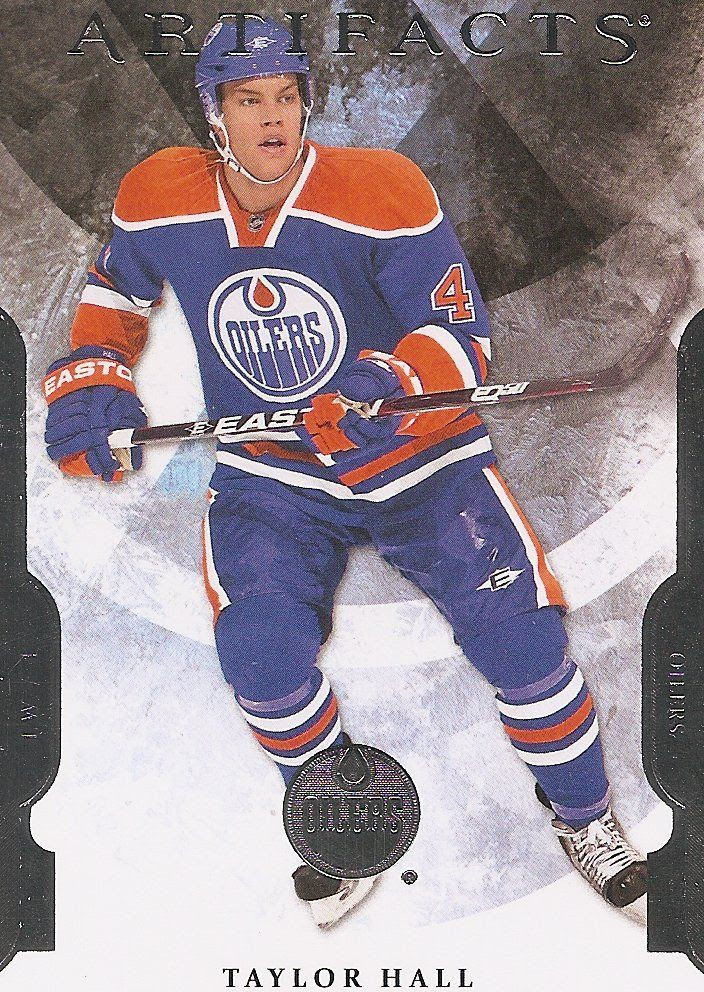 Base Card Design -
Artifacts comes at us once again with a classy base card design.  Instead of the lofty clouds we had last year, we now have a more serious looking geometric background.  The stark tones Upper Deck uses gives the base cards a mature look.  In the 10/11 set, Upper Deck decided to vary the backgrounds between blue and yellow clouds - it made the set feel a little disjointed.  That doesn't happen this year.  In fact, these cards remind me a little of 10/11 Ultimate base cards in their classiness.

The usage of foil on the front of the card is just about perfect.  The brand name, team logo, and sides of the card feature the perfect amount of foil to make the cards look nice.  My only quibble about the foil is that the player's position and team name are etched into the side foil panels, which can be a bit difficult to see. 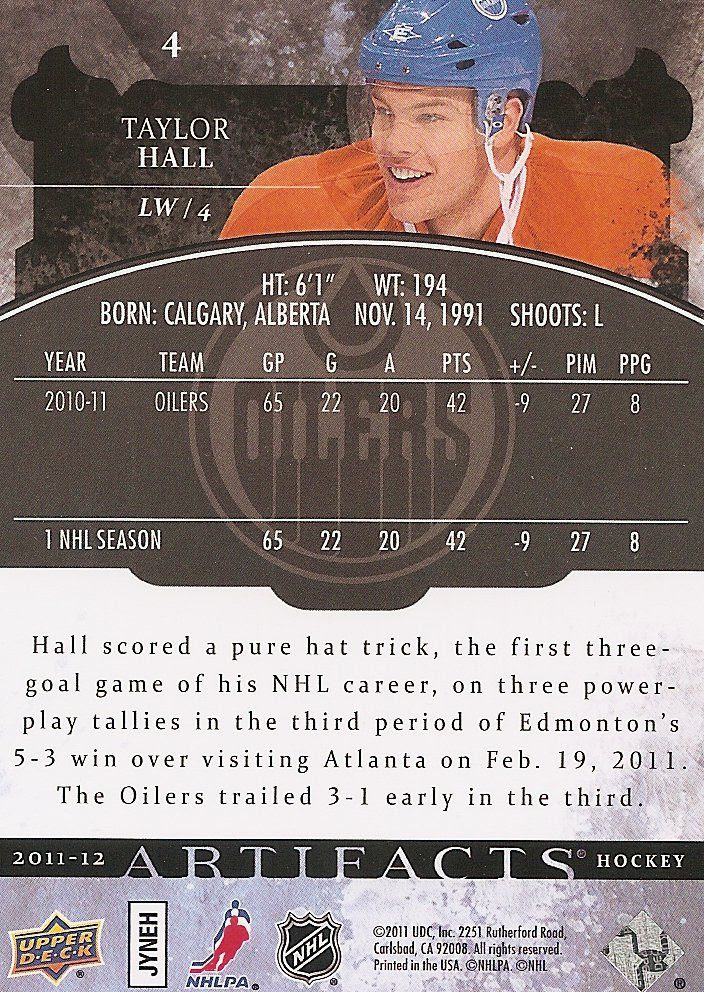 The backs of the cards are also well done.  There is a wealth of stats as well as a short write up of accomplishments.  It's nice to see that the pictures used on the backs are different than the ones on the front.  It's a slight detail, but it speaks volumes about the attention to quality and care in terms of design. 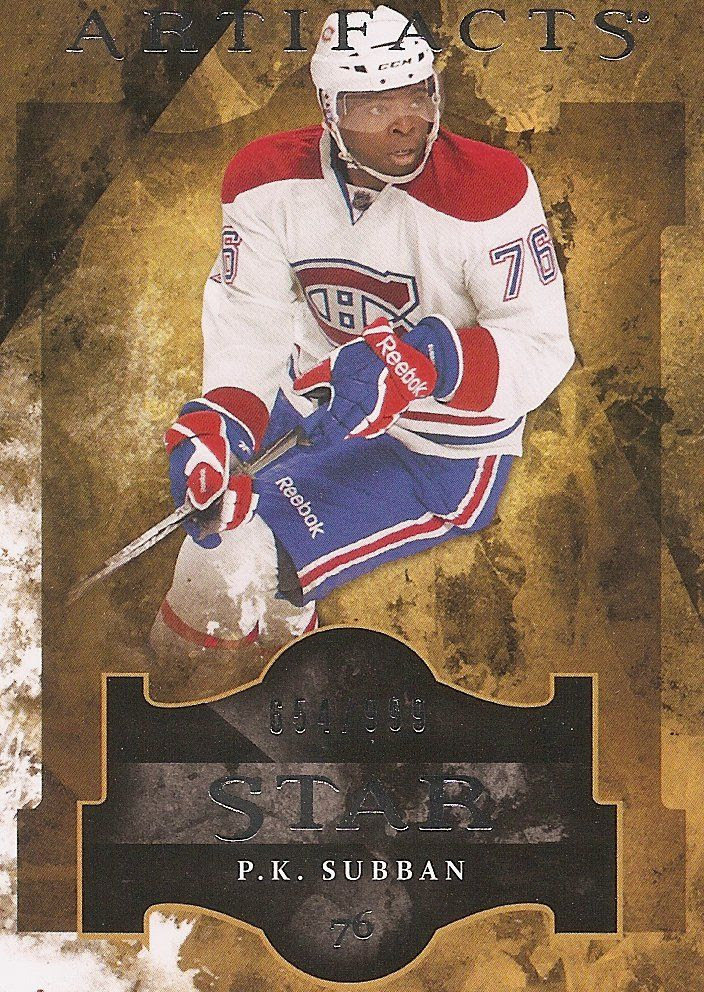 Among the main set of artifacts are Legend, Star, and rookie cards.  All three designs are almost identical save for the shading and color pallet.  The example of P.K. Subban above is a limited Star subset card.  It is limited to 999 copies.  For some reason this card reminds me of 90's decor.  The design just makes me think of something that I would see hanging in an office somewhere above a plastic potted plant.  It is a cookie cutter design that just doesn't look very good.  Can you tell that I am not a fan of this design?  These cards actually are similar to Star subset cards found in Artifacts prior to 10/11.  And I was not a fan of those either.  They cheapen the look of Artifacts.  I hope next year UD designers look revamp these cards or change them to something entirely different. 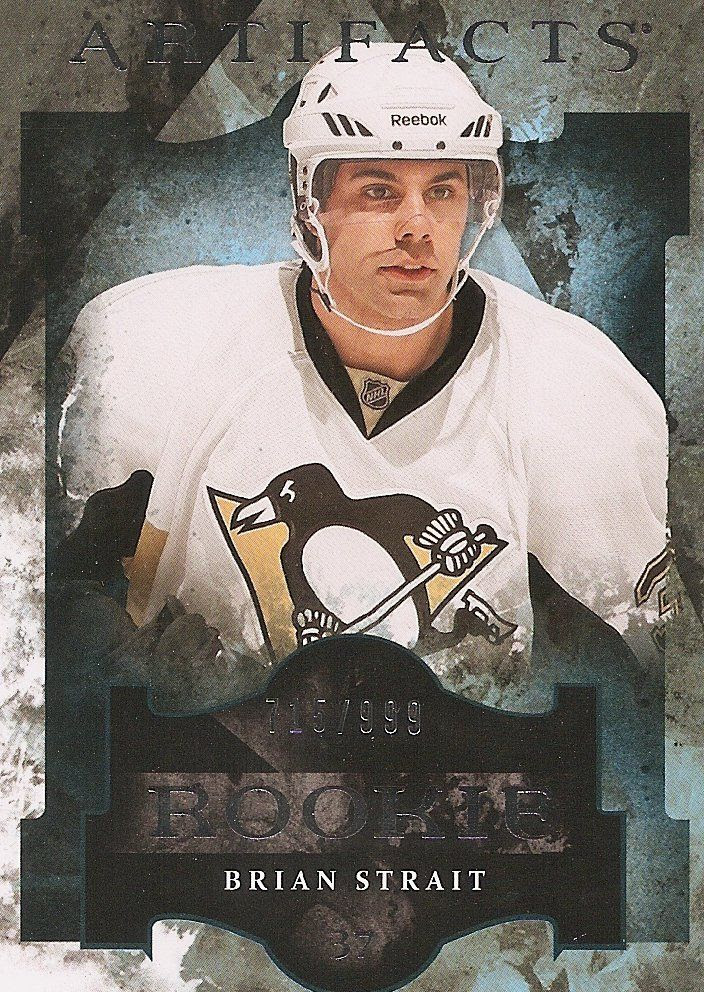 The Rookie and Legends subsets' color scheme actually makes the cards look better than that of the Stars subset.  It still has that office well-hang look, but it's more subtle... thankfully.

Overall the main Artifacts set is a tale of two opposites - great looking base cards and questionably executed limited subsets.

Inserts/Game-Used/Autos -
Artifacts boxes come with 3 memorabilia cards loaded within.  At least one will feature two or three players.  This year, the Tundra Tandems and Tundra Trios return with an updated look that is very different than last year.  One of the main problems last year was the difficulty in seeing the player and player names on the card.  This is not a problem this year. 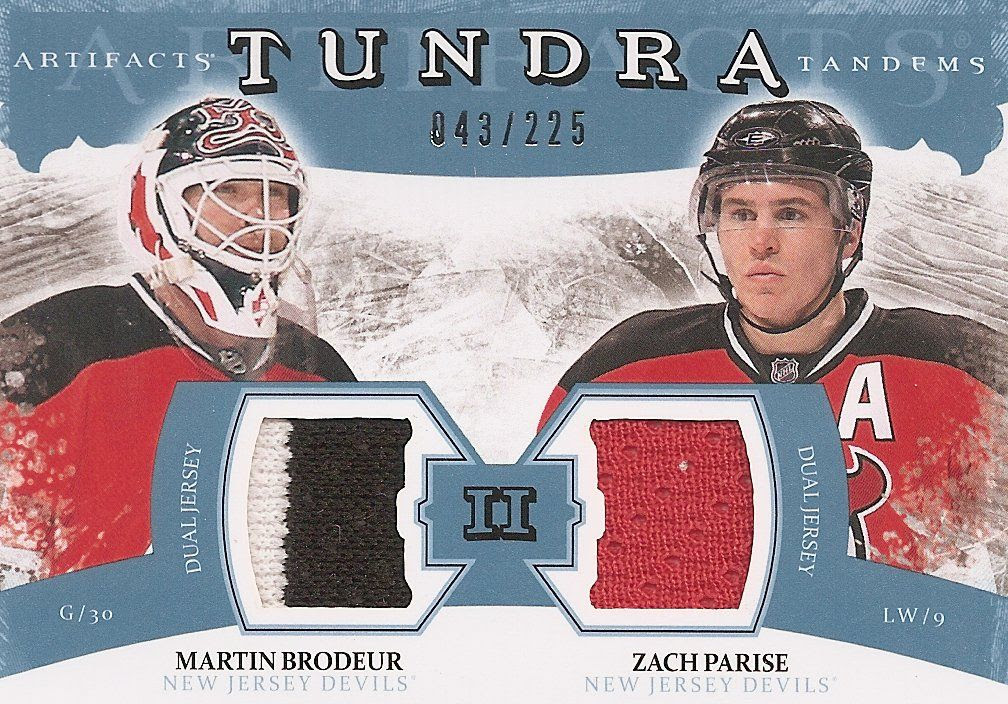 The Tundra cards get a very bright make-over.  The primary colors of white and blue give each card clarity.  It is very easy to see the images of the players as well as their names.  As clean as these cards are though, I would have liked to see a bit more glitz put on these cards.  The base cards have more foil than these guys!  As they are, the Tundra cards really have to rely on the quality of memorabilia on it to stand out.  While there are some really nice swatches, the majority of these cards will just feature single color pieces.  That's why it would have been nice to dress the card up a bit more. 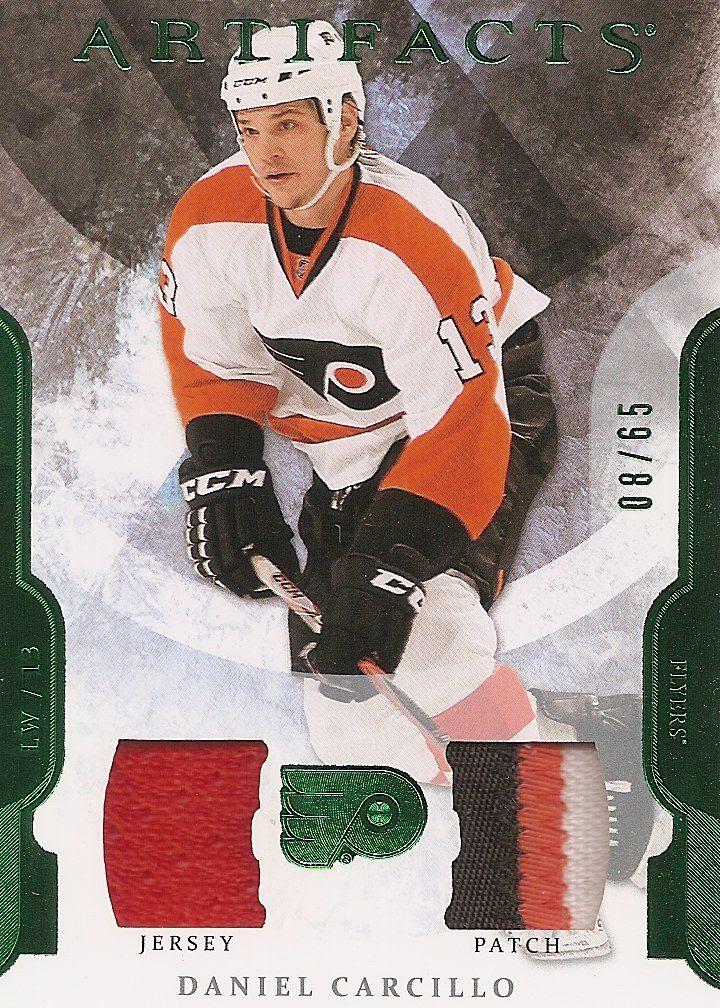 Base cards also get the jersey and patch treatment... and more.  There are multiple versions of the base cards.  Some feature just an autograph, some feature just jerseys, while others will have combinations of different things on them - even laundry tags!  There is a vast array of base card variations.  To get a handle on what is available, I would advise checking out Upper Deck's checklist for Artifacts so you know what to chase.  This will be especially important for collectors who only collect certain players.  Look carefully! 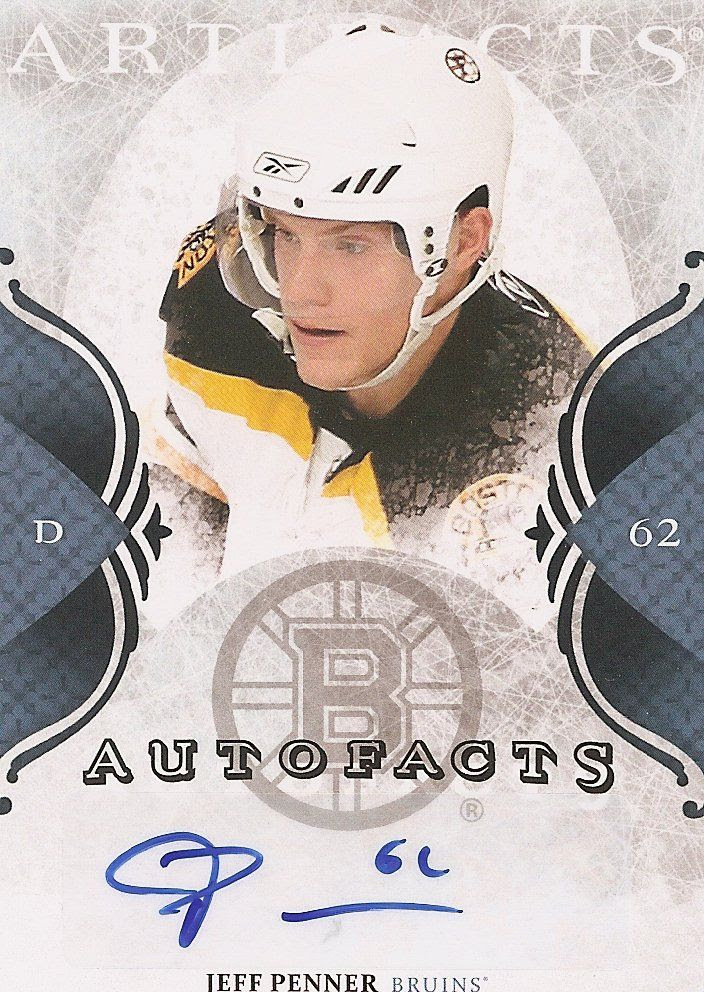 The main source of autographed cards in Artifacts will be from the popular Autofacts set.  I disliked last years design initially - but it grew on me.  This year's design is an immediate winner.  Like the Tundra Tandems, these cards have brightened up since we saw them last.  I love the large photo of the player displayed prominently in the center of the card.  It's also great that these cards have similar color choices to each other.  It really ties the whole set together well.  Now, the autographs found in Artifacts are sticker autos, but here on the Autofacts insert set, it looks properly done.  This set will be a nice one to put together. 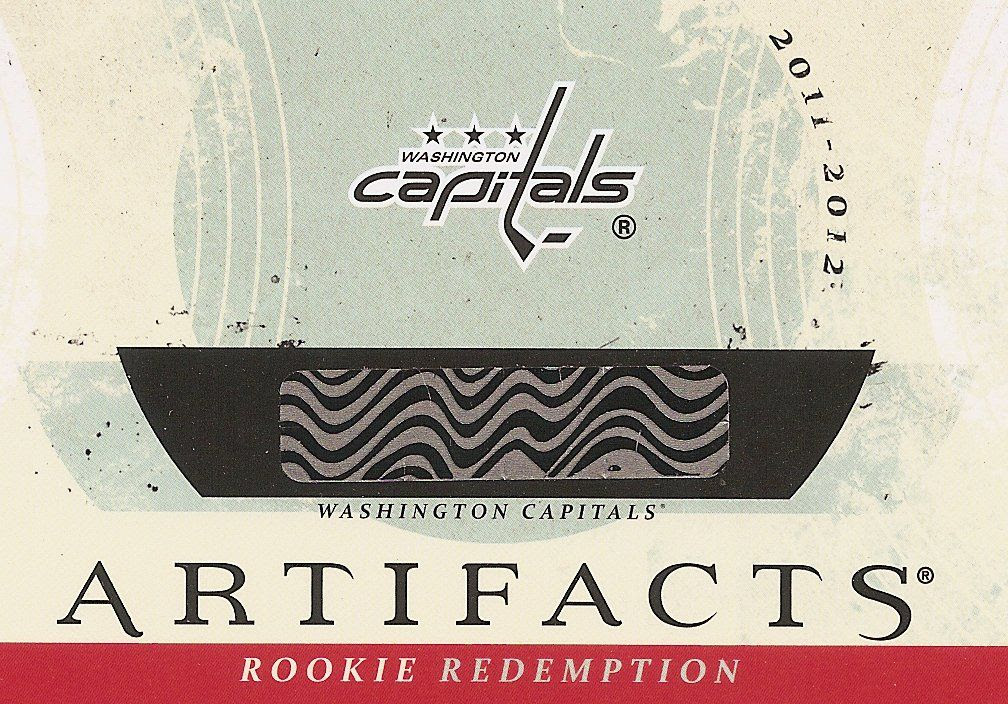 Because Artifacts comes out before the first official 10/11 NHL game is played, Upper Deck has included redemption cards for the rookies.  I am usually pretty disappointed whenever I pull a redemption card from a pack, but these are different.  They are not put into the product because an athlete failed to get their autographs sent into the company on time.  These are more like reservation cards for the new rookie crop purposefully done so that the Artifacts set can truly have all the rookie cards it should have in the set.  And actually, this year's redemption design is quite nice too, it has sort of a retro look to it.  Besides these regular rookie redemptions, there are also special autographed rookie redemption cards limited to just 99 copies each.  This is a new twist that that I think is a great idea.  Artifacts rookies have never been a huge draw, but this might spice things up a bit.

Overall Rating -
Artifacts is a great first product to buy this 2011-2012 season.  It contains three hits and an autograph per box.  And boxes are reasonably priced.  It's a fun break, especially if you manage to pull out a really nice patch or two... or even three!  Artifacts comes at you this year with a strong base card design and clean memorabilia/autographed cards.  It's a solid buy, and I would not hesitate to purchase multiple boxes of Artifacts this year.  It'll be interesting to see how Artifacts stands up to everything else that is forthcoming.  Last year, I ranked Artifacts the third best product of the year.  It'll be tough to hold onto that title.  Does Artifacts have it in it to stand the test of time this year?  We will see.  But for now, have fun busting into your box!

See me open a box of 11/12 Artifacts at D&P Sportscards in Sacramento, CA!