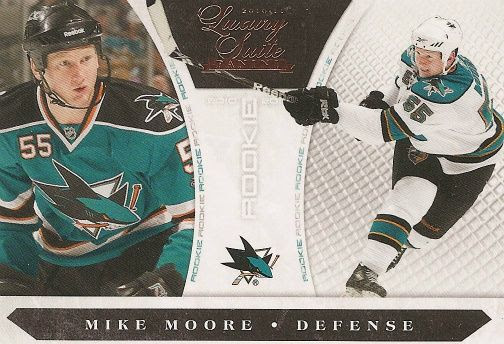 Let me start by saying this... there was a thread on Sports Card Forum that asked if Panini Luxury Suite could be better than UD's The Cup. Well, the answer is a resounding... NO!

Base Card Design -
Luxury Suite shares a similar characteristic to the product I reviewed last time - ITG Decades. Instead of just one pack with 6 six hits in that product, Luxury Suite features four packs per box with 2 hits per pack. The product is designed to maximize 'hits', so there are no 'regular' base cards. All the cards are either rookie cards, or have an autograph or memorabilia piece on it. The numbering on the back of the cards reflect that all cards are pretty much a part of the Luxury Suite set. This reminds me of Upper Deck Black from last year in that the regular set of cards were the memorabilia cards. For the purposes of this review, I'll review the rookie cards for the base set and the auto/memorabilia cards in the next section.

The standard rookie card in Luxury Suite incorporates a clean horizontal design with a close-up photo on one side of the card and an action photo on the other. The word 'rookie' is placed vertically in the middle of the two photos along with the player's team logo. The card itself is very thick and has a high gloss finish on the surface. The Luxury Suite logo is featured in bronze foil at the top center of the card. Overall the card is nice looking and feels premium. Looking closely at the card you can see that the designers really went for a 'marbled' look - a little like the Legendary Contenders insert from Panini Contenders this year. I think that this marbling is Panini's way of saying 'hey, this is a premium card!' - and I agree. It's pretty classy, and it works better here because the card is so thick. The card definitely feels premium. The basic rookie card is numbered to 899. There are many parallels of the rookie cards as well as autographed and memorabilia versions. Here's one that I pulled numbered to just 10. 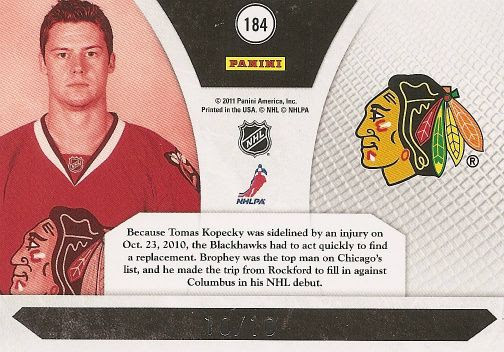 Although the cards have some nice elements, the cards all together get a bit repetitive to look at. And because of the dual photograph nature of the card, the player doesn't really stand out on the card. These cards remind me a little of cards that feature two players on the same card. Panini has made an interesting design choice here - to combine an action shot with a close-up - but this may be a case where the idea is better than the execution and/or result.

Base Card Design Score:
7/10
Inserts/Game-Used/Autos -
Well, Luxury Suite is all about the hits... and they come two per pack! Like the rookie cards, the hits come on very thick card stock and have a very high gloss front. There are all sorts of things you can get in Luxury Suite. Memorabilia ranges from standard jerseys to autographs to even pieces of players' game-used sticks! 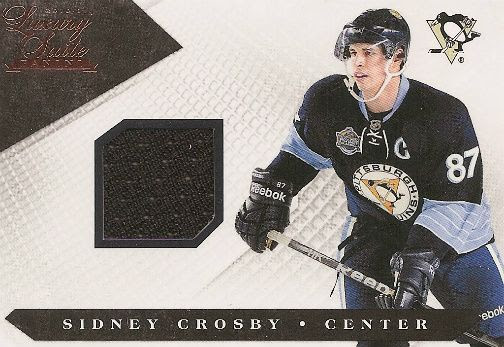 The standard hit, of course, is the jersey card - and acutally, these would be the regular cards in the base set of Luxury Suite. These cards feature the stars of the NHL. The standard jersey card is numbered to 599. The card design is horizontally focused with the player on the right side and memorabilia on the left. The swatch size for the jerseys are appropriate for a product in this price range. They are about the size of the Authentic Fabrics in Upper Deck's SP Game Used product. Jersey cards now are not the rare gem that they were when they were first introduced. And unfortunately, these cards don't feel special in any way - they are just another jersey card. Aside from getting cards of your favorite players and teams, these cards won't be too desirable. From a design standpoint, these cards a very clean - but it's probably a bit too clean as there is a lot of white space around the card. There is some faux texturing in the background - but it doesn't really give it a textured look or add anything to the card. If the cards were truly textured and had a tactile enhancement maybe that would add to the desirability of the card and make the card better. 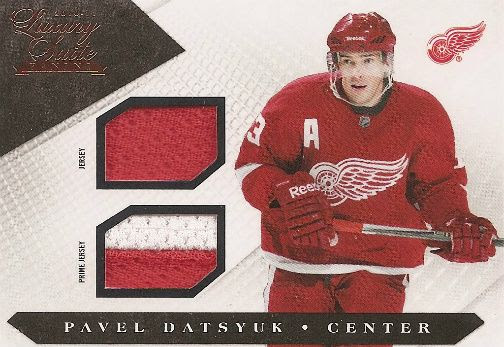 Some cards like the Pavel Datsyuk shown above feature two pieces of memorabilia. The individual pieces in these cards are smaller than the standard jersey card but usually are more premium. The dual memorabilia cards will have prime jersey pieces, stick pieces (some of which are really great looking), and parts of players' numbers as well. Panini has chosen to let you know what it is you are exactly getting by labeling the pieces. Aside from having multiple pieces of memorabilia, the cards share the same design as the standard jersey card. 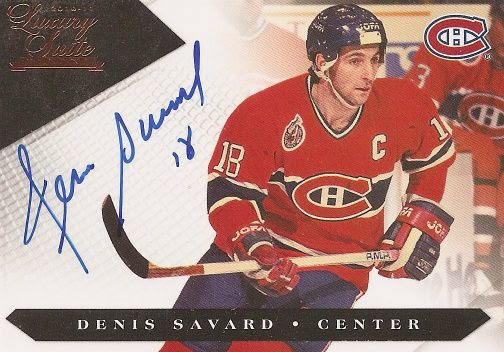 Speaking of the same design, the autograph cards also have the same design as the game-used memorabilia cards. Although I have to say that the autographs are the best of the bunch. Because the space is not taken up by some square holes for memorabilia, the players got to use up the space for their autographs. It's neat when players have a lot of signing room on the card. The Denis Savard pictured above is a great example of a very nice on card signature. The card here looks great with his autograph on it. You just can't get that look on a sticker. 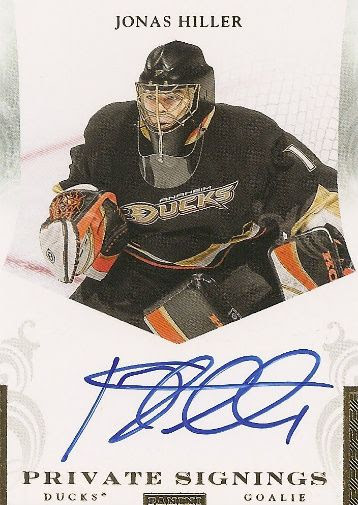 Speaking of same designs again... just kidding! Private Signings are insert cards that you can get in Luxury Suite that do not look anything like the rest of the cards. This is probably because the are not a Luxury Suite insert, but rather, an insert that Panini has chosen to put into a few different brands of its product line. The Private Signings are a breath of fresh air though in a box of Luxury Suite. These cards are *gasp* vertical! These cards feature on card autographs with a large space for the player to sign. I'm a fan of the look of the Private Signings cards. It's a clean design, but I don't feel as if there is any wasted space here - there is a large photo of the player, a large space for a signature, and some very nice foil touches. The only thing that doesn't make this card set a complete winner is that the card is razor thin compared to all the others. It comes on standard thin card stock. I wonder why Panini chose to do this. Otherwise this card set would be on par with cards from The Cup or National Treasures - it certainly has the same type of design/feel.

Inserts/Game-Used/Autos Score:
8/10
Overall Rating -
My expectation for Luxury Suite was very high. I had seen mock ups of the product long before it came out and it looked great on paper... but this product just didn't reach expectations. And judging from comments from fellow collectors, this is a sentiment that is shared by many. There are a few reasons why this product was a bit of a let down.

One - the look. While the cards look nice individually... they all actually look very similar to each other. The design of the cards from player to player from jersey to stick to auto all look the same. There just isn't an interesting variety to the cards. Once you've seen one, you've seen them all. Unfortunately, the jersey cards are pretty cookie-cutter and the dual pieces of memorabilia also feel the same way. Panini could have made the set so much better by just incorporating some more varied design in this product. I can see that perhaps they were going for a uniform look on purpose - the Luxury Suite look, as it were - but it didn't work here. It's boring. And one more thing... Panini needs to realize that collectors don't just want jerseys anymore... it's ok for them to be there, but Panini needs to start pairing more jerseys/patches with autographs. That makes for a killer combination. Upper Deck has really done well in that area and I hope Panini follows UD's lead there.

Two - the player selection. There are many players in this set, which seems like a good thing until you realize that getting the players you want is very difficult. I've heard complaints that the checklist is full of too many players. It is very difficult to get a player that is 1. what you want or 2. worth $ to sell or trade. For example, in the Private Signings checklist you have players like: Chris Neil, Cory Schnieder, Dan Ellis, Dustin Penner, T.J. Galiardi, Wojtek Wolski, Matt Carkner, etc. Now I'm not saying these players are bad by any means... but they are not the players that people want to pull from their packs. And there are a lot of these type of players.

Three - the price. Luxury Suite packs are around $50 each and boxes run from $150-$200. That's a lot of money - especially for the pack. $50 to get two hits is a huge risk, but it's a risk some may be willing to take if the hits were perceived to be worth it. Luxury Suite breaks I have seen typically do not have the big name stars coming out. It's a lot of money for a big risk. It's a similar gamble to SP Game-Used... but in my opinion SP Game Used is even a better deal than this.

So, Luxury Suite is a product that I would only recommend to try if you can really afford it. It does not seem to be a product that collectors have embraced. If the price were to drop on this product, then and only then would I recommend getting some. I really did have some very high expectations of this product, and now that it is live, I'm disappointed. The product is not a complete bust, there are some nice cards to get here, but for the cost I'd just be looking for singles of the cards I really want rather than to crack boxes or cases of it.

Check out the Luxury Suite cards I got in this video!
Posted by luke. at 5:24 PM