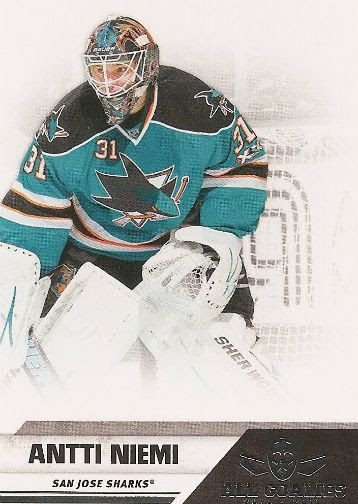 Panini releases the first of its 2 boxed sets of the 2010-2011 hockey card season - All Goalies. It's a nice little package for the price... and a must buy product for all goalie collectors out there!

Base Set Design -
The base cards in this 100 card set have a sweet, modern look to them. Kudos to the the design team at Panini for these cards! Especially well done is the All Goalies logo. It's the perfect logo for this set and just looks so darned cool! It's great that every card in the set has this logo stamped in silver on the front.

The overall color scheme of the base set is black, white, and sliver - and these basic colors do a great job of bringing out the goalies on the fronts of these cards. The images of the goalies are in vibrant color and really pop off the card. I really like how the photo of the player takes up about 80% of the card. It is really all about the player on the front. These cards really do the goalies justice, and they stand out on these well-designed, classy cards. 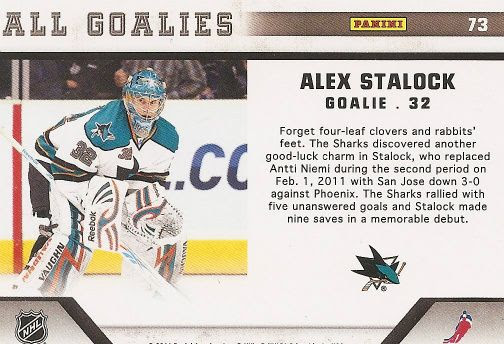 The backs of the All Goalies cards are nicely done as well. Panini switches to a horizontal format for the back and includes a small write-up about the goalie. Like in some of Panini's other offerings this year, these cards do not have any stats included. The picture on the back is the same as the one featured on the front - but is pulled back a bit more so that you can see the what is going on around the goalie when the shot was taken. 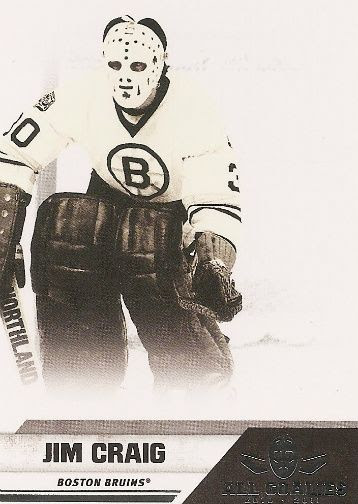 The base set includes the current NHL goalies, retired stars, as well as some rookie goaltenders that may not have another card out yet this year yet. It's a very nice mix, and I'm impressed that Panini was able to cram in 100 goalies into this set.

Base Card Design Score:
9.5/10
Inserts/Game-Used/Autos -
I find it really neat how Panini was able to add some collectability to this boxed set. In the past when you bought a set like this you simply got the basic set and that was that - no extras. Here, Panini gives you a few things to chase and get excited about as you open the little All Goalies box. First are the parallel cards. The parallel cards in the All Goalies set are called Up Close cards. Here is an example of one below. Tell me if you can spot the difference between this and a basic base card. 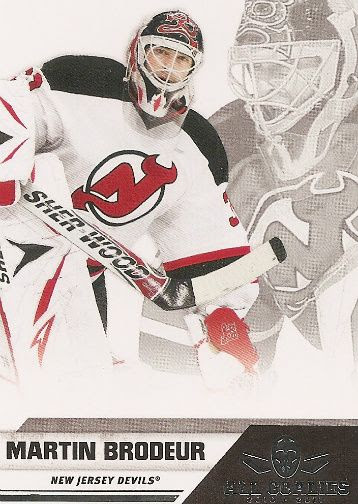 Did you notice a difference? It may be hard to tell at first. The only difference between the base card and this is the ghosted image of the player in the background. It shows an 'up-close' image of the player. Yes, it's definitely a very subtle difference. Other than that there is nothing else to distinguish the parallel card - no alternate colored foil, serial numbering, nothing to indicate that it is different except for that up close image on the front. I like the idea of having a parallel set here that can be relatively easily attained, but I would have really liked to see a bigger difference between the base and parallel cards. Also, the parallel cards you get will all come in a row. For example, if you get card number 1, you'll most likely get cards 2, 3, 4, and 5 as well. If you get card 6, you'll get 7, 8, 9, and 10. This could be nice if you collect a certain team and hit that teams numbering in the set... you'd get all the parallels in one shot! 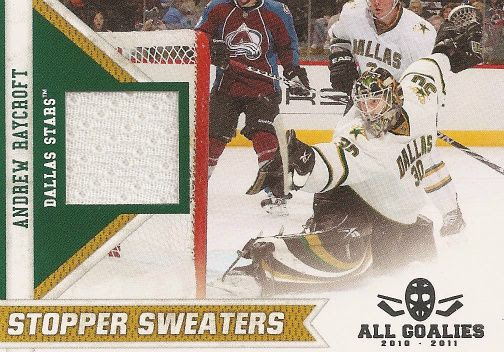 The real excitement factor in All Goalies is the last card you get in the box... and it's the memorabilia card! It's awesome that Panini put memorabilia cards in this set to add a little extra fun for the collectors out there. The memorabilia cards feature a different design from the base cards - and that's good thing - it provides a bit of variety for the set. These cards showcase the goalie's team colors and a nice action shot. Of course, these cards still have the cool All Goalies logo prominently featured on them. You can get both jersey and patches within the boxes.

Inserts/Game-Used/Autos Score:
7.5/10
Overall Rating -
Panini All Goalies is a nice little package at an affordable price. The set costs around $20 and you get 106 cards in one shot. For goalie collectors this set is a no brainer. It features a great variety of players from new comers in the NHL to retired hall of famers. It's not a set that you would really buy over and over again, but it has some fun inserts to try to obtain. This is definitely a set worth picking up and having in your collection.

Overall Rating:
8/10
(not an average)
Watch me open my box of Panini All Goalies!