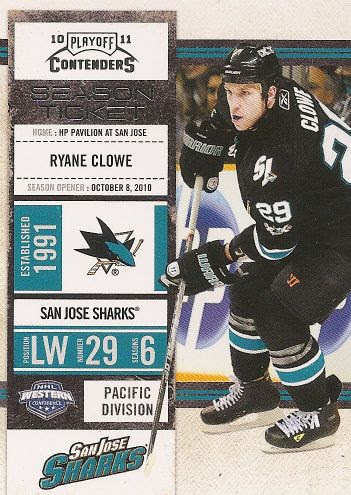 It's playoff time in the NHL and Panini appropriately releases their Playoff Contenders line. It was supposed to be released a month ago... was the wait worth it?

Base Card Design -
Like many of Panini's products released this year in hockey, Contenders is already a mainstay brand in other sports. It's probably most popular, and has had the longest run, in football. I'll always mainly associate the Contenders brand with football cards, but it works pretty well with hockey I must say.

The base cards are very sharp looking. The most obvious feature of the base cards is the ticket design that Panini employs. The entire left side of the base card features a 'season ticket'. Within this ticket are the player's name, team, position, number, years played, division, amongst other things. An action photo of the player is to the right side of the card. The designers have also tastefully highlighted the cards with the team colors.

The Contenders base cards are definitely better than Panini's other base card offerings this year. If you have been keeping up with my reviews this year, you'll know that my main complaint this year about Panini's base is that they are so 'flat' looking. What I mean when I say flat is that there are no effects on the cards to make them feel premium or pop out. This isn't the case with Contenders. Each Contenders base card has a bit of silver foiling on it. It's not a lot, but it really makes the cards feel more premium than, say, Donruss or Pinnacle.

Speaking of Pinnacle, the backs of the Contenders base cards are done in a similar way. The back of the card does not feature a full set of stats. In fact, there is no stat line. The back tells you the player's height, weight, date of birth, and how he shoots. A small paragraph about the player is featured at the bottom - and that's it! I'm fine with such little information given on a card's back, but others may prefer that they include the tradition listing of stats. There is definitely room for stats, it's just taken up by an enlarged player photo from the front side. 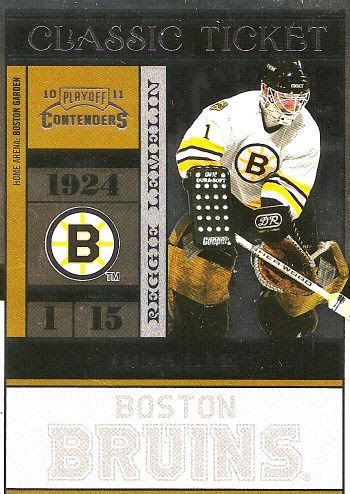 After the standard base set, Contenders features retired legends cards in a subset called Classic Ticket. These classic ticket cards are a smart way to insert into the set some of the players from the past that people still want to collect and find new cards of. The Classic Ticket design stems off the ticket motif used in the base set. The cards are printed on foil board and have a retro font to really give it some old time feel. Unlike the standard base, the classic ticket cards do feature a career stat line on the back along with a paragraph about the player. 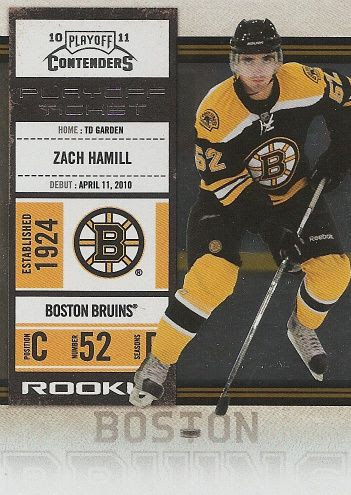 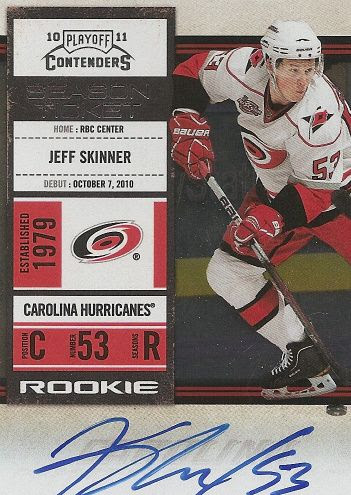 The rookie cards share almost the same design as the regular base card but with a few key differences. These cards feature full foil on the card as well and the word 'rookie' where the team name was on the base card. The bottom of the card leaves room for the player's autograph.

These rookie cards are very well done. The foil really makes parts of the card stand out. The player really pops out of the card and the team colors kind of glow in the light. Panini did a very nice job on these. Before I saw them in person I wasn't sure if I was sold on these rookie cards. Having them in hand I can say that they are a winner in terms of look and design.

I mentioned that these cards also provide collectors with a challenge in terms of collecting. Here's why. Unlike SP Authentic, Panini has not stated the print runs of the rookie cards, nor are the autographed cards serial numbered. Collectors know from previous Contenders products that there are short printed rookie cards and super short printed rookie cards. Collectors will not know which one are SSP until Panini releases some figures. So collecting the set of these will be challenging because some cards could be very difficult to find and could be more expensive than originally thought (if a card has a particularly low run).

So overall, Contenders gets a strong thumbs up from me in terms of their main base set. The cards look great, feel premium, and will provide strong value in terms of collectibility.

Base Card Design Score:
9/10
Inserts/Game-Used/Autos -
Contenders is a product that has A LOT of insert cards, a strong amount of autographs, and no game used memorabilia cards (please correct me if I'm wrong on this). If you're a collector from the 90's, Contenders will remind you of the days where insert cards were all the rage. I loved those days because in order to make a desired insert card, companies had to really think of unique ways to make the cards stand out and look good. Two of Contenders inserts really remind me of this - Leather Larceny and Against the class. 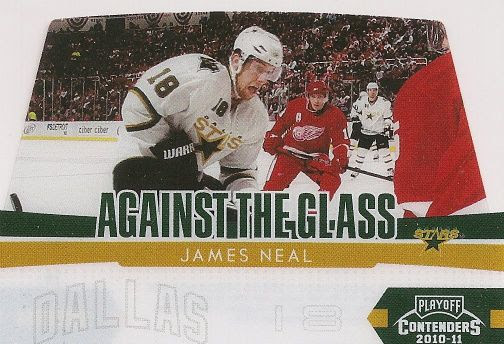 The Leather Larceny cards feature a texture on the front similar to the goalies pads. Having a textural difference has always intrigued me - be it the bumpy basketball feel on some basketball cards or faux pigskin on a football card. The feel of the card brings you closer to the game. It's great. The Against the Glass insert set is an acetate card that features the action right up against the glass and boards on the ice. The cards try to simulate what it would be like to be right up in that first row. Acetate cards have already been done this year by Panini, but it's good to see them continue to try them in new ways. Both of these insert sets come with autographed versions. 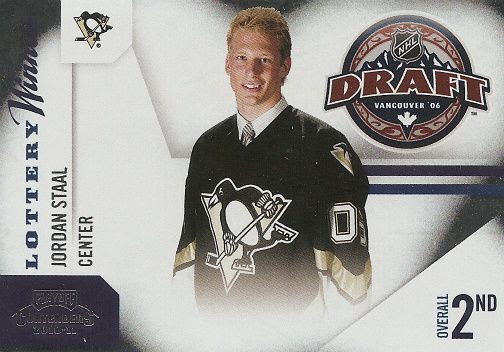 Most of the other inserts in Contenders this year come in themed sets put on foil board card stock. I have found most of these inserts to be very cleanly designed and I enjoy seeing Panini come up with interesting ways of grouping players in set. An example of this is the Lottery Winners insert set. This set features players who were drafted in the lottery and have since gone on to play well for their teams. The Jordan Staal card shown above is an example of this set. It shows that he was drafted 2nd in that draft class and includes the logo of the draft from his year - 2006. The photo of him comes from his draft year as well. It's funny to see how these NHLers have grown since they were rookies. 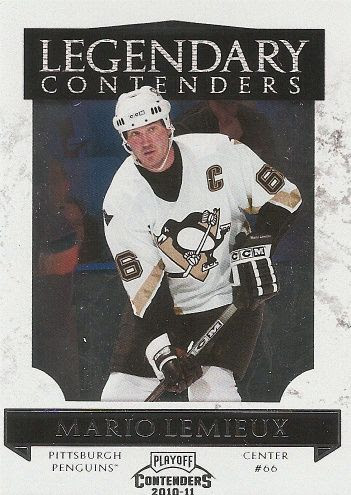 The Legendary Contenders insert set is one of my favorite designs this year. The design is very bright and the foil on white marble look really adds some class for this classy set. Obviously this set showcases players that are legends in NHL history. This card reminds me a little of a National Treasures card. I hope Panini continues to makes sharply designed cards like these. 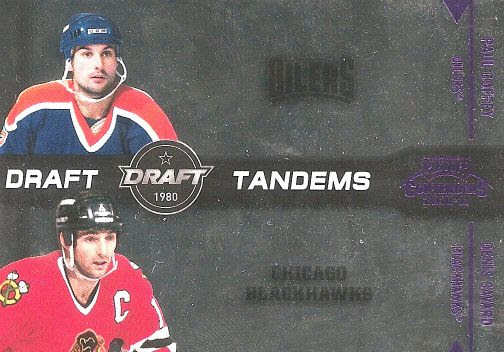 Above is an example of a card that I'm not so fond of. This is a Draft Tandems card (purple version numbered to 100). This card was obviously meant to have a couple of autographs on it. If it did, this card would be spectacular and look great. Without the autographs, the card feels like it was just included in the set because it was already designed so they just printed some and inserted it into the set. Sticking the team name where the auto should be is a cop out. Both Upper Deck and Panini have been guilty of this in many of the past sets. I really wish this practice would stop. I'd say just leave these non-auto or non-game-used versions out entirely. Otherwise, you just have cards that look like they are missing their key element. 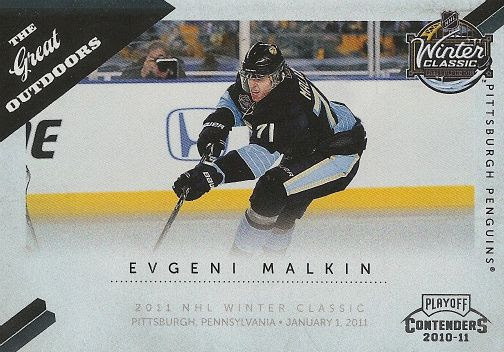 There are many other insert sets in Contenders and I'd suggest taking some time to check them out. There are The Great Outdoors (featuring the Winter Classic game shots), Award Contenders, and Rookie of the Year Contenders, and even Golden Ticket 1 of 1 cards.

So as you can see, if you are into insert sets, Contenders this year won't disappoint. Many of the insert sets have autographed parallel versions, but you won't find any game-used cards. I personally am OK with that because to me, I'd always rather have an autograph given the choice.

Inserts/Game-Used/Autos Score:
8/10
Overall Rating -
Panini comes on strong with Contenders this year. It's a great product for autograph chasers. On average there are 4 autographs per box. In the box that I bought, I received 4 rookie ticket autos, but there are many autographed insert cards in this product besides the rookies. Contenders has a very pleasing design that feels more premium that most of Panini's offerings to date. But it also has a slightly steeper price tag as well. A box will cost between $130-$150.

I think Contenders is a great product to go against SP Authentic. It already has a strong following in other sports. Hopefully this will help Contenders make a strong splash for hockey collectors. And hopefully, the hard signed rookie cards will also hold up in value making this set desirable for years to come.

One negative that I must mention before I end my review concerns the collation of Contenders. I have been reading many forum posts where buyers are pulling multiples of the same players throughout a case. People have been getting multiples of the same autographed rookie cards. In fact, in my box I got two James Neal Against the Glass cards. This really shouldn't happen in a any product. It's unfortunate that it happened here.

Besides that, I hope you give Contenders a try. It's definitely worth a look at!

Check out my box of Contenders here:
Posted by luke. at 8:25 AM 1 comment: