Fiiiiiiiiinnnnnaallllyyyyyyyyyyy!!!! I can't believe it's been since the beginning of March since I've last posted a review. Well... that's because of delays from both Panini and Upper Deck. Really, last month should have had at least a couple of products come out, but instead it turned out to be a long dry spell for new hockey cards. Thankfully though, the drought in products has ended with a heavy hitting product: SP Authentic.
Base Card Design -
I've always loved the super clean look of SP Authentic. The cards are always on some sort of medium-thick white card stock with minimal but effective graphical enhancement. Some may argue that it is too simple and too plain, but for me, this is THE look for a premium hockey card. It's just classy looking! 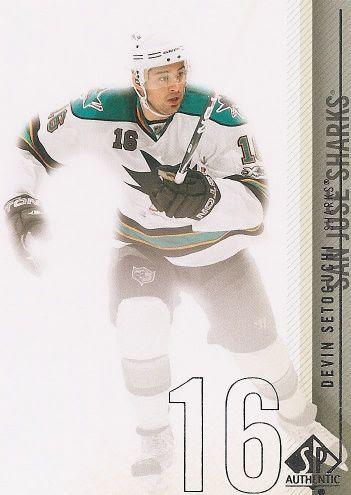 This year's design features the player on a bright white background. There is nothing there except the player. And even the player is barely there - part of his image has been ghosted out just a little. It's a design choice that gives these cards a timeless feel, like a fading dream that's always there haunting you. Haha... sorry, I didn't mean to sound so artsy fartsy on you all the sudden, but that's just what comes to mind when I look at these cards.

The front also features the player's number prominently shown in large foil font as well as the player's name and team. All of these elements look great on the card. Upper Deck's use of foil on their cards always works. It just does some how! The foil elements enhance the card, and Upper Deck doesn't overdo it. It's exactly the right amount of foil to make the card look and feel premium. Huge props again to the UD design team. They should get a raise!

If I did have one complaint about the base set design though, it's the gray border on the right hand side. I feel it looks just a little out of place and is a jarring presence on the card. I don't really have a suggestion of what they could have done, just that it could have been more subtle since the rest of the card is so perfectly executed. I just feel it is a little out of place. Not a huge complaint, but it's the one part of the card that I didn't particularly like. 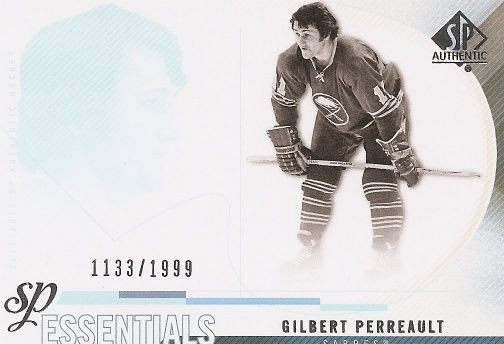 Also a part of the base set is the SP Essentials sub set. This is one of 3 main subsets of the main base set. The other two are the Future Watch and autographed Future Watch cards. This year's Essentials set takes the timeless feel of the cards and goes a step further. These cards look great! Each card is oriented horizontally with serial numbering to 1999. The cards are very minimalist in color. A ghosted out head shot of the player is set in the background next to a softer black and white image of the player. I think that the colors used and the modern fonts create a perfect subset for the main cards. I have nothing bad to say about the Essentials. It is worth pointing out though that these cards would be perfect for getting in-person autographs on. There is just the right amount of space there to fit a good sized signature.

Just like the Young Guns are the bread and butter of the regular Upper Deck release, the Future Watch cards are the meat and potatoes part of the SP Authentic set. Yep, they are that important. The Future Watch cards, most notably the autographed ones, have a huge following and are heavily collected by many people - including myself. Last year I completed the entire auto set and I will try to do the same this year as well. 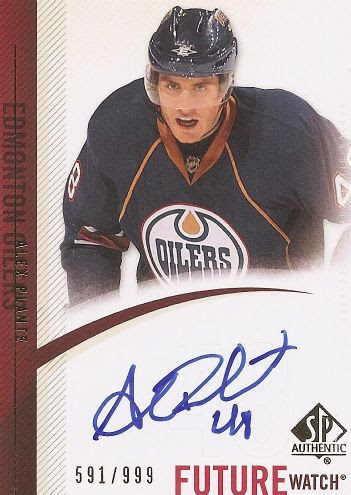 This year's Future Watch shares similar characteristics to the base card's design, but up the bold factor a little. Instead of grays and silvers, the Future Watch cards feature a deep red colored border as well as gold foil stamping. These cards have a nice look to them, but I don't think they fit as well in the color scheme of the set as a whole. The red and gold change the entire feel of the Future Watch cards compared to the base cards and Essentials. I personally think they should have used navy blue for the bordering. That might have been better and more of a match in terms of whole set 'feel'. As they are now, they sort of remind me of an Ultimate Collection card. It doesn't matter really though because everyone's going to want these cards!

All in all the base set of SP Authentic this year is tremendous. The base cards and Essentials are both improved over last year's design. The Essentials especially are nice. I have to say that I did prefer last year's Future Watch cards a bit more than this year's offering, but still they are good looking cards that many will be clamoring to get!

Base Card Design Score
9.5/10
Inserts/Game-Used/Autos -
The main draw of SP Authentic must be the Future Watch Autos, and these make great hits when you buy a box, but there are plenty of other cards to chase when buying SPA. One of the consistent inserts over the years have been the Sign of the Times cards. They make their return again in this iteration of SP Authentic. 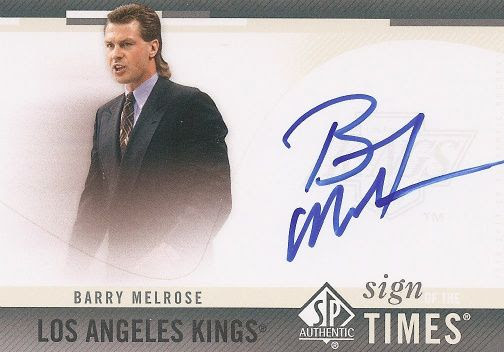 The Sign of the Times cards fuse elements from the base, Essentials, and Future Watch sets. They have a gray border like the base cards, a horizontal orientation a la the Essentials, and a blue ink autograph like those of the Future Watch cards. Combining all these elements makes a very nice looking piece of cardboard. If there weren't so many of them I'd even think about putting the set together - I imagine that all of them together would look really sweet. Though they look great, the problem lies in the amount of them. The Sign of the Times checklist nears 100 cards, and there are short printed versions amongst the set. It's a hard set to put together, and getting great players is also difficult. I pulled 3 SOTT autos in my 3 boxes (Barry Melrose, Jamie McBain, and Bobby Sanguinetti) and none of them made me excited. Melrose was kind of cool to pull, but if I really wanted it, it could easily be found and for a very reasonable price. Far less common are the multiple signature Sign of the Times cards. It's possible to pull 2 autographs on one card up to eight on a single card. These muli-autographed cards are always great to pull if you're lucky enough. This year there are cards that feature multiple signatures of the same player. It's an interesting concept... but definitely not my idea of a radical and cool idea. I think I'd receive the same happiness from pulling a card with only 1 Crosby auto than one with 2 on there. But maybe there are people out there who really like this idea. I just don't happen to be one of them.

Rounding out SP Authentic's autograph inserts are Prestigious Pairings, Future Watch Patches, Base card patch parallels, SP Chirography, Immortal Inks, and Marks of Distinction. Getting these cards are more difficult than the regular Future Watch Autos and SOTT cards. Each of these insert cards usually feature a pretty low numbering and have strong selling values.

It really helps that the autographs are all hard signed on card. This is one of the main reasons why SPA is always so well liked - the cards were all held and signed by the actual player on the card rather than a sticker placed on the cardboard.

Besides the Future Watch Patch auto cards and base variation patch cards, there are no other memorabilia opportunities here - and I'm totally fine with that. Game-used cards that feature jersey swatches and patches are neat, but I don't think they have ever been better than getting an autograph of a player. SPA doesn't water itself down with cheap, low-valued memorabilia cards. I really appreciate that about this product. It's really about getting the authentic signature of a player hard signed on the card. And that works really well for me!!! 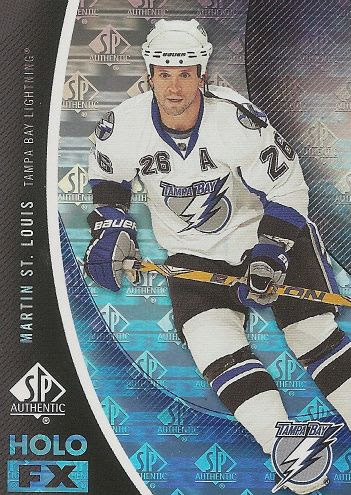 Finishing off the insert sets in SPA are the HoloFX and HoloFX die-cut cards. The HoloFX series has been around for a long time, but instead of keeping value or staying a high interest focus point to collect, they have not stood up well to the test of time and long term collectibility. The cards used to be one of the best things you could pull out of an SP pack. And they used to feature a three dimensional picture of the players head that could turn - now they are just cards with some nice foil on it. The cards look nice and modern, but collector interest has definitely shifted. Looking at prices on eBay for these cards will tell you that this set is not at the forefront of collector's minds and wallets. That's really too bad though, because it would be great to have a high valued card without an auto or patch piece on it. (Well, Ice Premier Rookie Cards comes to mind... but these kind of cards are few and far between.)

Inserts/Game-Used/Autos Score:
9/10
Overall Rating -
SP Authentic is as good as it ever was. It continues its hobby dominance this year by offering up some great looking cards, valuable rookie cards, and hard to get autographed cards. It's definitely one of the products that is a must buy this year. That being said though, I really believe that you must buy this product in boxes rather in packs. SPA boxes are definitely hit or miss (more on this a little later), but packs are ridiculously hard to get anything out of. There are a TON of base packs per box, and packs are in the slightly around or over $5 range. Whenever I buy packs of SPA I already know I'm about to get a ton of base, and if I'm lucky, a hit... and if I'm really lucky, a hit that's not a scrub. So I'd just save my money and get the full box to guarantee all the hits I should get out of a box. And even buying boxes is a tricky situation because many boxes really won't give you good value back. I know this because it took me three boxes before anything good came out. And I've seen forum post after forum post of box busters getting very little in good value. Of course I've seen some really great cards pulled... but just like anything else I guess... you really just have to be lucky with the box you choose!

Even though I feel like I got jacked with 2 out of 3 boxes of SP Authentic, it is still a very high quality product worthy of purchase.

Overall Score:
9/10
(not an average)
Check out the three boxes I got on Youtube below!