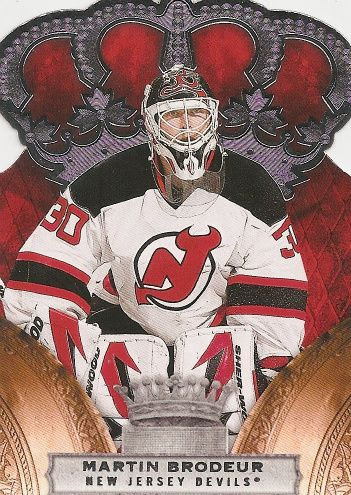 Base Card Design -
So here comes one of the most unique products of the hockey card season - Panini's Crown Royale Hockey. This is yet another brand that Panini has resurrected from the past. I'm not sure if I had fond memories of the old Crown Royale, but I remember always being intrigued by the concept and enjoying the funny crown die-cuts that are the signature of this product.

What stands out to me is obviously the base card. It's just a fun card that looks great. It features a pompously royal (in a good way) foil crown on top of the card. The players are featured nicely front and center, and team colors provide a subtle backdrop. Unlike other Panini products, Crown Royale doesn't just have a completely plain surface (i.e. Donruss/Score) or a completely foiled surface (i.e. Certified/Limited) - it mixes the two in a very nice way. The foil on the Crown Royale cards help the key features of the card really pop. The crown is, of course, in foil as is the player's name and team. The simple design elements of the card all reflect a royal, kingly effort. 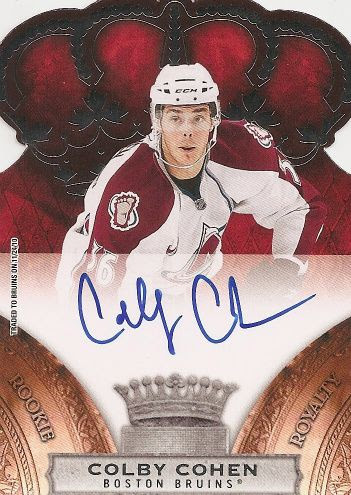 The rookie cards look exactly like the regular base cards except for a white area that features the rookie's autograph. The autographs that I received in my box were numbered to 499. I'm not sure what could have been done, but the white area is a little distracting and is a stark contrast to the rest of the card. The top rookies from this year are numbered to 99 and have a very special design. These cards feature a large memorabilia patch with a silhouette of the rookie die cut in front of it. I was not fortunate enough to pull one, but they are pretty nice looking cards. Check out eBay for some pictures if you're interested. They are sweet.

My only complaint about the card is that it is pretty thin for a higher-end card. I would have liked the cards to be a little more substantial. Panini has the habit of making all their cards on thin card stock. I feel that Crown Royale would benefit from having a card stock similar to that of UD Ultimate Collection. It would give the cards a more rigid feel that would tell me that this is a high-end product.

Base Card Design Score:
9/10
Inserts/Game-Used/Autos -
Crown Royale definitely has it's share of inserts, game-used cards, and autographs. I'll start with the regular inserts. The regular inserts have some great themes going on. I pulled a Royal Pain. These cards showcase the hardest hitters in the sport. Here's Steve Downie: 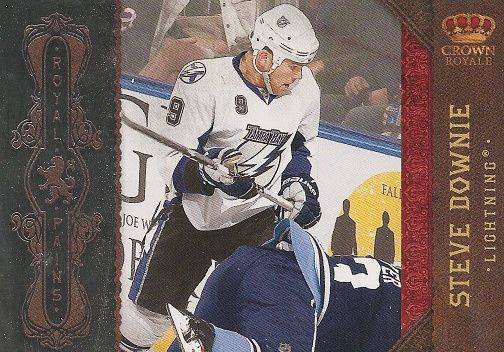 The photo used on the card is perfect for what the card is trying to convey. Other inserts feature other themes just as well. A goalie insert called In Harms Way shows the danger that goalies have to face as they try and keep the puck out of the net. These inserts are nice ways to put in interesting portrayals of players that might not get the spotlight all the time. The inserts have generous amounts of foil applied to them. They are nice cards, however, just like the base cards, I wish they were on thicker stock. 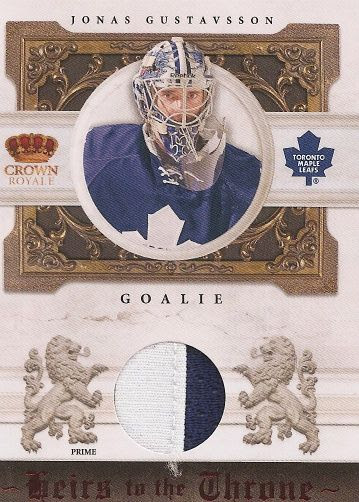 Speaking of thicker stock, I did manage to pull a rather thick card, this Jonas Gustavsson Heirs to the Throne patch card numbered 27 of 50. The Heirs to the Throne set has a very nice and clean design. It actually reminds me a little of some of the National Treasure cards from Panini's other sports. Again, the name of the insert set really goes well with the theme of Crown Royale. 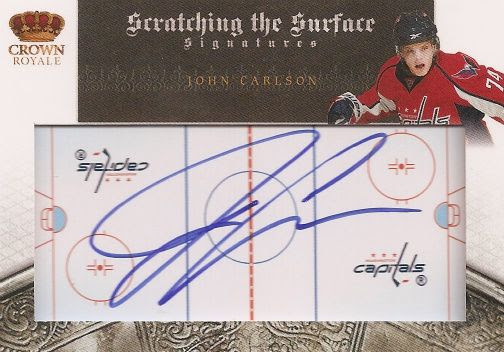 This card above is called Scratching the Surface Signatures. Panini had the players sign a mini hockey rink and embedded it into the card. It's Panini's way of showing that the signature is more 'on card', but in reality, this is really in the same class as sticker autographs. I think that these cards have a smart design to them, but to me it comes off a little gimmicky. I think this card could have been enhanced if the 'ice' rink were made of acetate or some other material. Panini has done this type of insert card in other products as well, so it's not a surprise or anything new. These types of inserts really have to rely on their design to stand out. The Scratching the Surface Insert set to me is just 'ok'. 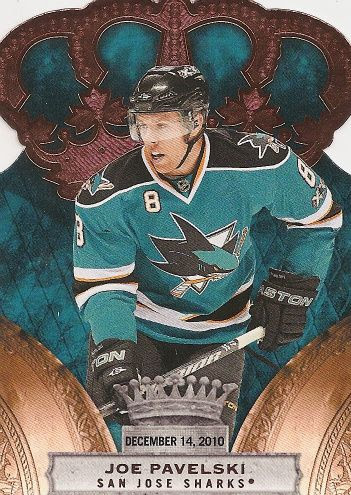 Parallel cards of the base set are also found in Crown Royale. This card of Joe Pavelski features a gold foiled crown. Regular base cards have silver crowns while limited numbered cards have crowns of varying colors.

There are two insert sets that I didn't get any of but I sort of have a problem with. One is the Calder Collection set. I know that this set is supposed to be a vehicle to have rookies featured, but really... this year's Calder winner might possibly come from last year's card crop (Logan Couture/Micheal Grabner). Panini has had a while to think out this set, and I think it would have been a smart thing to do to feature Couture or Grabner as well as the players that made their debut just this season. It could have been a great way to show how 'on top of things' Panini is. Ahh well, one less Couture card for me to chase! The other set I'm not a fan of is the Royal Lineage set. This insert set features three tiny pictures of the players. I've seen this design from Panini in all the sports that they do. Panini (and UD too) should re-think how they feature multiple players on a single card. Designs like Royal Lineage need to be a thing of the past!

Crown Royale has many more inserts to pull that I haven't mentioned. One insert that I think is unique is the Voices of the Game Insert. Not everyone likes these non-hockey player inserts, but it's great to see some announcers get some cardboard time. The Razors Choice insert set is also another insert that really stands out. Check these sets out if you get a chance!

Inserts/Game-Used/Autos Score:
8.5/10
Overall Rating -
Crown Royale is definitely a quirky product. There are things I really like about the cards and definitely some issues I have with it as well. Overall this is fun, short little break. To me, Crown Royale has a high-end price and look, but not a high-end feel. I hope that in years to come Panini will continue this product and improve upon it (thicker card stock PLEASE!). Opening Crown Royale now really reminds me of opening it when Pacific produced it many years ago, but I'm not sure if that's a good thing. I think Panini can really step up this brand. For now, it's a nice product - but I won't be buying heavily into it. A few boxes of it here and there and picking up desired singles is the way to go!

Check out my breaks of Crown Royale on Youtube! Also, subscribe and friend me if you would be so kind. Thanks!