This year's Spx really surprised me. I wasn't sure what to expect from it, but Upper Deck has come through with a well designed product that is a great value. 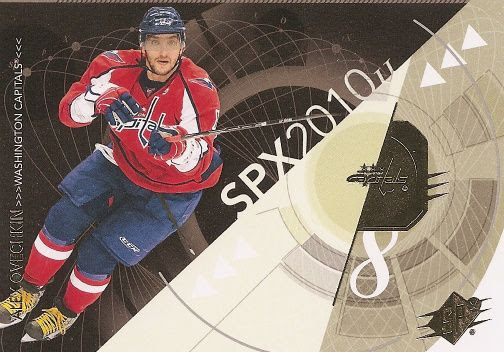 Base Card Design -
First off, the base card. The 2010-11 base cards are horizontally aligned and feature geometric elements set amongst a dark gray/black/off white background. This is a sharp design that really looks great! Gold foil highlights the player's name, team logo, and the SPx logo. I really think that UD has come up with something very classy and modern here. It's a really dressed up based card! The more I look at it, the more details I see that I like. Whoever came up with this design gets a huge thumbs up from me! I can't really complain about anything. For people who like seeing the hockey rink and fans, I can see why this type of card may not appeal, but other than that I can't find any fault. Nice job here. 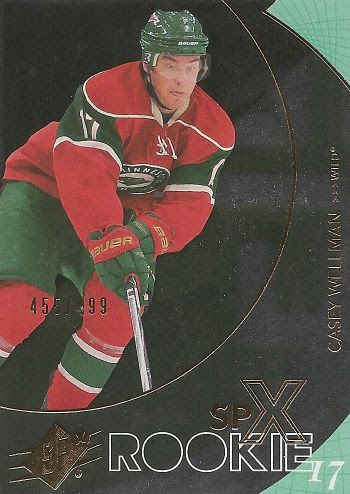 To collect the entire numbered set of SPx you'll have to chase limited rookie cards and a hard to pull subset called Flashback Fabrics. Above you will see an example of an SPx rookie numbered to just 499. This rookie card features a dark gray foil background. Instead of being horizontal, the card is upright. These rookie cards are not as eye catching as the base cards to me. I think the dark foil makes the card disappear a bit too much. The light greenish corner borders on the top and bottom right corners don't go as well with these as they do with their jersey card counterparts. 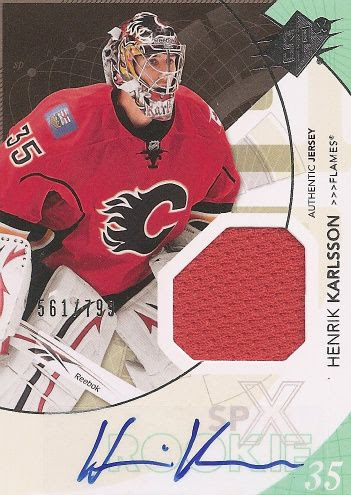 Speaking of which, here it is - the auto-jersey counterpart. These cards are nice because they feature both a piece of jersey as well as the player's autograph. It's strange, though, that these jersey autos have a higher serial numbering than the ones that don't have it. The white background on these cards really brighten up the look of it, and the background actually compliments the green corner borders. This is an eye catching card and the piece of fabric it comes with has a nice prominent position on the front of the card. As usual with rookie jersey cards now, the memorabilia comes from an event rather than an actual game. I'm not too picky about that, but there are many who really just want the game-used pieces. 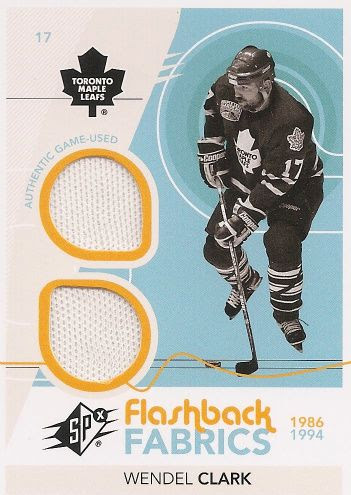 Fortunately, there are actual game-used cards in the regular numbered set. These come in the form of a subset called Flashback Fabrics. These cards use a quasi-retro design. The Wendel Clark I got is a very nice and clean card. The colors on the card go really well with hockey, and having the player in black and white keep up the retro flair. The Flashback Fabrics set is a difficult one to complete though. These cards are case-hits, I believe, and there are autographed versions that are an even harder pull. Good luck with it if you're interested in getting them all.

Base Design Score:
9/10
Inserts/Game-Used/Autos -
I've seen a lot of breaks so far of SPx and it seems like people are getting 5 or 6 hits per box. Most people expected 4 hits, so getting 1 or 2 more is great. I got 5 hits in my box and was quite happy. The standard jersey card in SPx is called Winning Materials. 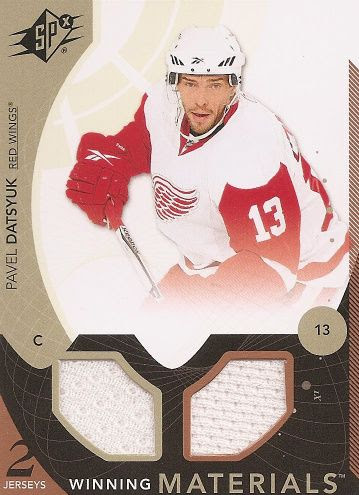 These cards feature 2 jersey pieces. The basic design of the card mirrors that of the base card except with a lot less geometric business going on. I usually like a card that is cleaner and plain, but I feel that it would have been nice to fill in some of that white background with a design of some sort. They really could have just taken a page from the base card design and re-used it just like they did for most of the card, but they chose not to. In my opinion these standard jersey cards are nicer than the ones from Series 1 and Black Diamond. 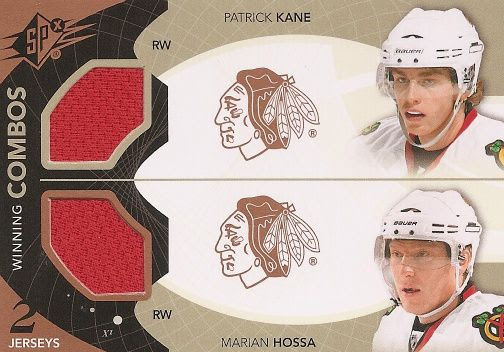 Winning Combos cards feature 2 players instead of 1. These cards are horizontal and have a very similar design to the Winning Materials. I like how you can tell that these cards are definitely in the same card 'family'. My only complaint about the dual jersey card is that putting the team logo in a blank space of the card reminds me of what Panini does to take up room where there should be an autograph of game-used piece. 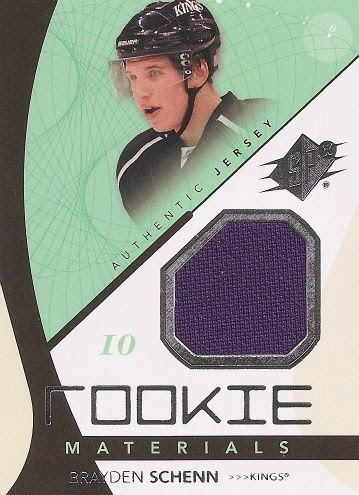 The final memorabilia card I received was from the Rookie Materials set. I think these cards are very nice looking. The light green background with the swirling geometric grid lines is a nice looking design element. The card is very modern looking and each part of the card comes together very well. Since I got Braden Shenn, my jersey piece was purple which complimented the colors used on the card perfectly. 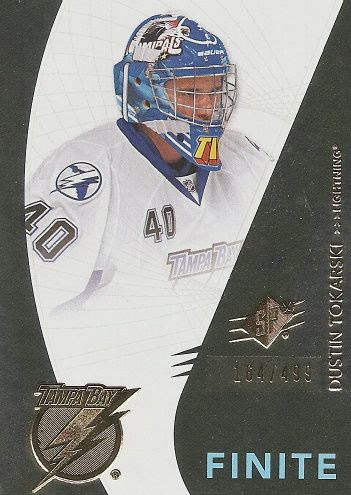 My final insert was a limited SPx Finite Rookie insert card. The card is limited to just 499 and shares some similar design elements of the Rookie Materials inserts set - notice the left border in particular. It's a card that features a lot of foiling. I've noticed that in SPx, if a card doesn't have a memorabilia piece, it gets a lot of foil treatment. Well, I guess it had to have something!

Inserts/Game-Used/Autos Score:
8/10
Overall Rating -
This year's SPx is definitely a great surprise. I wasn't too happy with SP Game-Used this year, and I wasn't sure if Upper Deck could pull it off with SPx - but they did. I would definitely choose SPx over SPGU this year. The value that comes from a box is so much better - on average. Plus, boxes of SPx are currently about $50 cheaper than SPGU. I think it's a no-brainer which one to choose for those on a budget.

Also going for SPx is the look and design of it. The cards are very well done this year. I think that SPx has always 'tried' to make a futuristic product, but with this year's cards I don't think they tried - they just did. UD has come out with a fantastic looking set that is fun to break with some good value per box.

I definitely want to pick up another box of this stuff!

Check out my box break from the Hobby Box below!