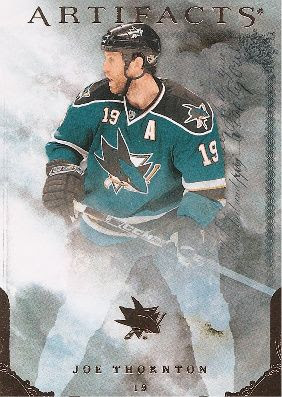 Base Card Design - This is the second product out of Upper Deck this year, and it comes hot on the heels of Certified. This product is definitely a good match for Upper Deck to put against Certified as the product, while looking very different, has aspects that are similar to Panini's first release.

I wasn't sure what Artifacts was going to be like, actually. Since this is my first year back in the hobby, I didn't have any experience with Artifacts during the 09/10 campaign. I was very surprised when I got the cards that they had a very premium card feel to them. The cards have a nice glossy and thick feel to them. They are not thin and don't bend like Certified cards, and the gold foil accents are very shiny.

On the message boards, people have had very mixed reactions to the design. Seeing the cards in person has really swung my opinion in a positive direction. The cards have a very artsy feel to them. The pictures of the players are 'ghosted' out at the bottom and they are set amidst a steam/cloud background. Now, what do clouds and steam have to do with hockey? Maybe all the ice in the rink melted... but other than that, I'm not sure. It does look pretty cool to me, but I can see why people may be turned off to this design. 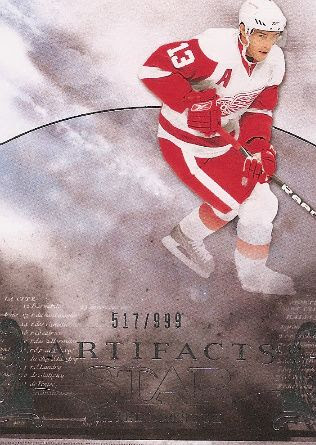 Another part of the main set are the rookies and stars numbered cards. Both of these sets are numbered to 999. These cards remind me of collecting SP Authentic last year. There were limited rookie cards and a set of limited star player cards as well. These cards continue the cloud design, but for some reason I don't like them as much. I think they player looks too small on the Artifacts Star card and the rookie cards are very plain to me. Though the rookies are numbered to the same amount as in SPA, they are not autographed so that doesn't help their cause and will hinder their hobby value. 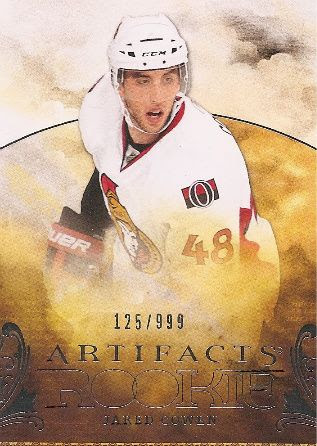 Inserts/Game-used/Autos -
I mentioned earlier that this product and Certified had some similar aspects. The similarity comes in that both products feature a heavy amount of parallel cards. There are many versions of the same card at different print runs. I have never been a fan of having tons of parallel cards. If it were up to me, there might just be one parallel card and one regular card - think Topps and refractors when they first came out. But here in Artifacts there are lots and lots of parallels. Here is a card that I got in my box. It is a Henrik Sedin base card parallel numbered to just 35. Wow... 35 sounds like a low number, but I know there are other versions with an even lower print run. I actually didn't know this was a parallel card until I looked closely at it. The foil on it is just a little different than the regular base cards - it has a lighter gold foil as opposed to the more bronzen regular foil. 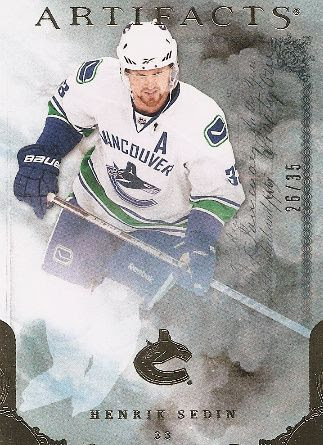 My box also came with three memorabilia cards. I received two Treasured Swatches inserts and one Tundra Tandems card. I'll talk about the Treasured Swatches first. In terms of design, they are very clean, but also very dark. They have almost a muted quality to them. The Claude Giroux seems especially dark since his card came with black jersey pieces. The Tomas Plekanec I got was a bit better since it featured brighter colors and a pretty nice rainbow of colors on the patch. These designs seem to be standard Upper Deck fare. Definitely not bad, but definitely not inspiring either. These are not cards I'd go on eBay trying to find, but I won't complain getting them in a box. 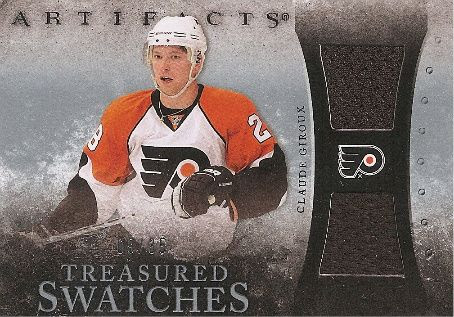 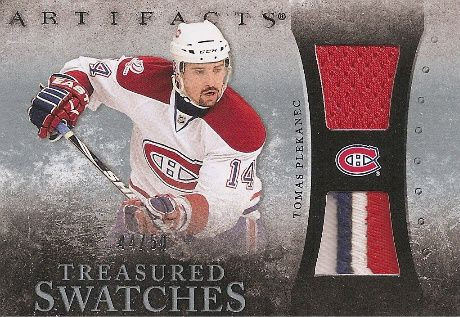 The Tundra Tandems card I got was very limited - too bad they were not hobby stars with great value. Oh well. I received a Bernie NIcholls/Bill Ranford dual jersey numbered 1 of 10. The Tandems card does not stand out to me in design. It features some nice artistic elements, but like the Treasured Swatches, the overall look is very dark. They players are not in full color; they are in a two-tone sort of color scale. And the players are also very small on the card. I had a hard time telling who I got when I first glanced at the card. 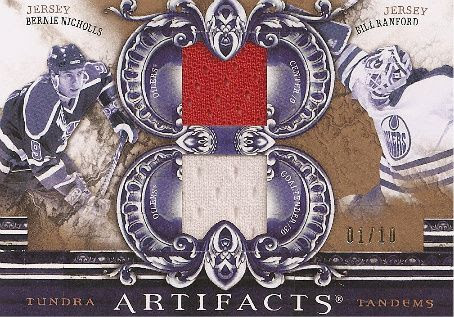 Each hobby box comes with an autographed card as well as the memorabilia cards. I received Jordan Staal. The coolest thing about the card I got was Staal in the blue Pens jersey. The other design elements of this card did not impress me. I think Upper Deck could have done much better with these. This was just an uninspiring and plain design. When I look at these cards, I feel like I'm looking at a big oval mirror... like the one from Snow White. The autograph comes on sticker. Though the sticker is kind of cool with it's own holo-foil look - it's still an on sicker auto, not on card. 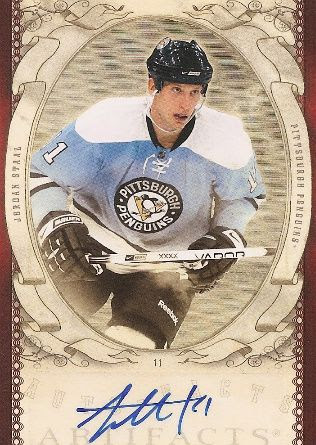 My final insert from the box was a rookie redemption card. This is a card that can be sent in for a rookie that didn't make it in the set because it's too early in the season. Most people will get a team's rookie redemption... say... the Sharks or the Kings. I ended up getting the 'wild card'. I'm curious as to who I'll get with it! I'm definitely going to have some fun with it and redeem it - not trade it off or sell it. 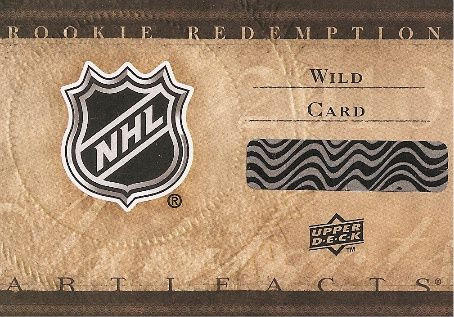 Overall Rating -
Artifacts was a really fun product to break. With a hobby box, you get a nice mix of memorabilia cards, rookies, and an autograph. I personally like the design and look of the cards, though some could be better. I think I would have a very tough time choosing between a box of this or a box of Panini Certified. Both products feature 10 packs per box and a slew of hits. I'd probably lean towards Artifacts, but really it could go either way. I'm giving both products the exact same overall score, an 8. I'll probably be buying one more box of Artifacts when my local card store gets some in. I'll let you know what I get. Thanks for reading!