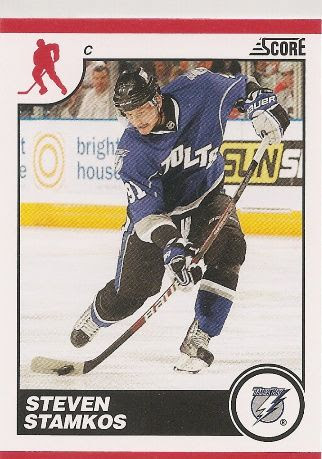 Base Card Design -
So Score's been out for a while now but I haven't been able to get any until this weekend. My local card store chose not to get any in so I thought I wouldn't get any of it at all, but lo and behold, my local Target had some blaster packs on the shelf! This is really surprising since I live in Woodland, Ca... not a hockey mecca by any stretch of the imagination.

To celebrate it's 20th anniversary and re-release, the good people over at Panini/Score based their design on what they came out with in 1990. The cards are similar but not the exactly same - they are cool, though, because the cards bring back a lot of nostalgia from the past. There were a lot of collectors in the 90's (including me!), and seeing these cards brings back the days when I'd spend every cent of my parent's money buying cards.

The base card design features an action shot of the player on white background. Two red lines border the top and bottom of the card. A little picture sits in the corner of the card and tells you what position the player plays. The team logo is also on the front. All the standard stuff with nothing missing! Well, it doesn't tell you the player's number...

But I think that Score's design is perfect for what it is. It is not overly ambitious, and it's pretty much what I would expect paying about a dollar a pack.

In terms of the photography, it's hit or miss. Some of the action shots are really great and unique, but most are boring shots of the featured player. 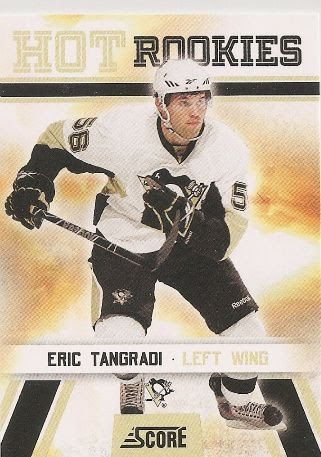 The Score base includes a subset of rookie cards with a different design. These cards remind me of a cross between Upper Deck Victory and Artifacts. The cards feature some 'rad' graphics and have the player's image sitting on top of a cloudy background. I have mixed feelings about these cards. I can't decide if I like them or not. I guess I neither like them or dislike them. That's not good. One good thing about them is that they short printed a select few rookies. This is good for collectors because it will give those rookie cards a bump in value and make the set a little more valuable.

One more subset of the base cards are the Season Highlight cards. Obviously these cards detail a special moment from last season. These types of cards used to be standard in base sets. It would allow card companies to put multiples of star players in the set. I do like that these cards are here; they are an interesting read!


Base Design Score:
7/10
Inserts/Game-used/Autos -
There are many inserts in the Score set and they come at widely varying rates. Some are very common while others are very difficult to pull out of a pack. I was not able to get any, but there are some pretty rare autograph cards as well as cards shaped like a snow globe. 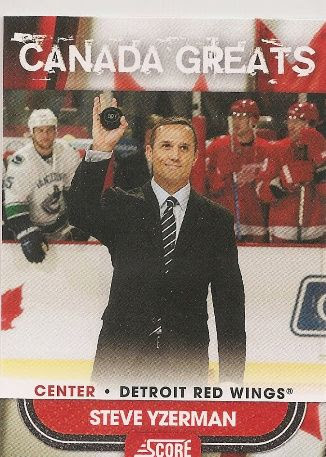 I was only able to get some of the more common inserts in my box break. And to be honest, I was pretty disappointed in them. The insert cards have a different design from the base cards, but other than that, they could easily be mistaken for a card that was a subset of the base set. They are printed on the same card stock, not glossy, and have no foil highlighting that could set it apart. Some of the sets, like the Net Cam insert set, do feature some really cool photography though. This is the saving grace of the inserts. Design wise, I do not feel that the inserts stood out though, and I was not excited to get them in my break. 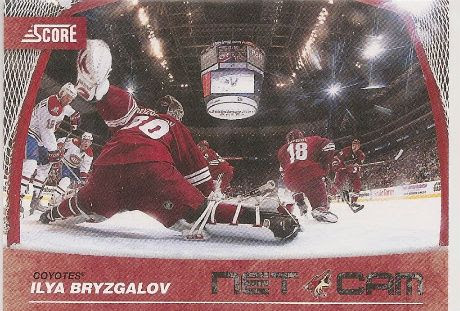 As with just about every Panini product out there (including the other sports, or course), Panini features parallel cards in this product. Panini should just change their name to Parallini. You get one glossy base card per pack and 20th Anniversary cards are randomly inserted. The glossy base cards are ridiculous. These cards have a barely noticeable glossy front on them. There is absolutely no other change in the card. No different color. No special stamp. Nothing. This is actually one of the most uninspired parallel cards I've ever seen. I would have just left them out if I were at Panini. I've seen eBay auctions for these cards and sellers basically say you have to trust them that it's the glossy version. Haha.

Overall Rating -
Although I feel like I have been focusing on negative aspects of Score in this review, I must say that Score is a really good value for a hockey product. Unlike Upper Deck Victory, Score has cards in it that could really have a high value and desirability. It's awesome that you have a chance to pull out an autograph, short printed rookie card, or a die-cut card in a pack that only costs around $1.

I would definitely recommend buying some Score, and I personally will be getting more the next time I visit Target.
Overall Rating:
8/10
(not an average)

Check out my blaster box of Score from Target in the Youtube clip below. For other box breaks, keep checking back on my homepage! Thanks for reading!
Posted by luke. at 8:23 PM