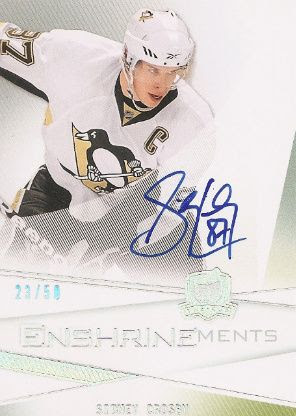 So there is a lot of negativity amongst collectors now concerning Upper Deck. And that's rightly so, I've heard of a lot of things that UD has done that have made people unhappy. For some reason though, that stuff doesn't bother me so much. What has always been great about Upper Deck to me is their card design. In my opinion, UD makes the best looking cards out there. And I have to stress this is just my opinion. Take the above Sidney Crosby card for example, some people might find this card plain, but I think it's a very sharp looking card. First of all, it's very bright and has a nice modern color scheme. The image of Crosby sticks out very well. There is a nice place to put the signature, and the card is highlighted by tasteful foil touches. Although this card has no memorabilia pieces attached to it or anything, I really think this card, and cards like it really highlight UD's great design team.

I actually just got this card on eBay. At a really great price too! On a side note, I was actually very surprised at how low I was able to pick this card up for. UD releasing 09/10 The Cup so late really didn't help the secondary market prices... but it helped me pick up this great card for my personal collection. It's my current favorite card that I have!

I'm bummed that UD can't make licensed cards for any other major sport. Actually it's one of the reasons I decided to get back into hockey card collecting. It was the only sport that had Upper Deck!

Now, hopefully with Panini in the mix, it'll force Upper Deck to step up their game and not only make great cards, but have a great company that consumers want to buy from and are happy with.
Posted by luke. at 6:39 PM