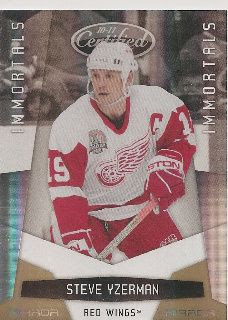 Base Card Design -
Well, here come Panini back into hockey! First of all, I'll have to admit I am and have never been a fan of Panini, but, I'm always willing to give new products a chance and I was excited to break some of this product. The Certified base cards look very good. They have a pretty modern design and have plenty of flash. There are geometric shapes all over the place. The entire card is foil board and has a sleek finish to it. The front features the player's name clearly at the bottom as well as their team.

The photo of the player seems to just pop out at you. The photography doesn't really feature action shots, but rather nice clean looks of the players during a game. I wasn't expecting to like the base card look, but it's good looking in person. Everything about the look of the base cards says clean, precise, and worthy of a high mid-end product. 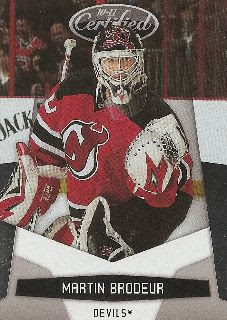 I do think Panini could have done better in some aspects of their base cards. For one, the cards are very thin and are prone to curving. I would love to see Panini use a thicker cardboard for their base cards. I feel that I have to put a book on top of them or pack them together really tightly to keep them from bending. Topps Chrome type products also have this problem too. The other complaint I have about the base card is that I feel I have to sleeve all of them as well. They are very easy to get fingerprints on. The silver foil on the sides of the card especially make fingerprints easy to see.

If I could change one thing about the look of these cards it would be to make the Certified logo foil on the top. As of now, it's just a plain gray printed part at the top of the card. Putting that logo in some foil would make it stand out more and give the card an even higher-end feel to it.

The back of the cards are standard Panini fare. They look very much like the back's of their products from other sports. For Certified, there is one line of stats and a blurb of information. Not really a great back. I feel like they just phoned it in on them.
Base Design Score:
8.5/10
Inserts/Game-used/Autos -
Certified has a lot of inserts, game-used cards, and autographed cards. First, I'll talk about the standard insert card. The standard insert card from Certified feels a lot like the base cards. They have the same thickness and bendy-ness. Some of the designs are better than others, but none that I have seen so far make me want to collect them. These cards remind me of cards that they used to put into the regular set as season highlights or all-star cards. Since they have the same feel as a base card, I really think they could have just been a part of the regular set. This actually might make them more collectible as many people do like collecting sets and would make the base card set bigger and more challenging. Here's an example I pulled of an insert that I like... but don't like enough to collect them all. It's called Certified Champions and features players who have won the Stanley Cup. By the way, all the inserts are numbered (I think). It's a nice feature, but since these cards aren't really that rare, I don't see a need to number them. I think they'd trade the same was as a non-numbered insert from Upper Deck would. 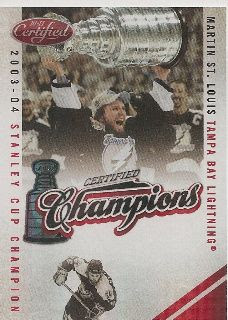 One thing Panini likes to do is parallel everything to the high heavens. If there a card, there's probably a good amount of parallels for it. The base cards feature many variations in different colors as well as some with game-used pieces. Here's a Evegeni Malkin I pulled: 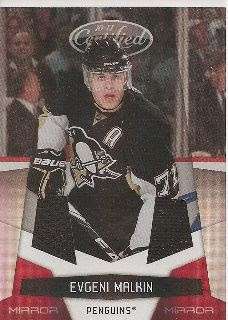 It's kind of hard to see, but there are two pieces of jersey on this card flanking the photo of Evgeni. This particular card is numbered 29/150. I also got a Michael Del Zotto parallel base card numbered 141/150. 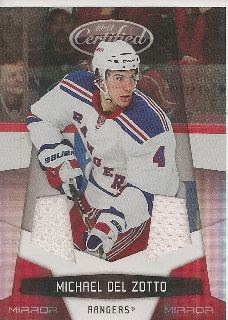 The inserts also have levels of parallel cards too. Some cards feature a jersey while others might have a piece of patch on it. I bought a box of Certified from The Hobby Box and Chris pulled me a Big Men on Campus Patch/25 of Michael Cammalleri. Check it out in my video at the bottom of this review.

The standard game-used card from Certified is called Fabric of the Game. Obviously these cards will feature game-used pieces on the card. I pulled a Matt Duchene/250. The one I got here is pretty standard. It features a small square of jersey in a single color. I have seen other cards where the piece of jersey spell out NHL or the player's jersey number. The patch on this card looks a little lonely. It's a little square of patch on a huge white area. 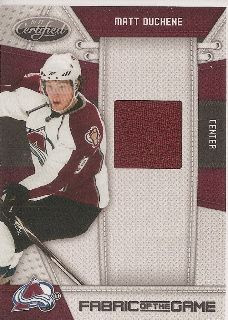 I've noticed that Panini does this quite often, they will produce a card so that the design can be recycled to fit many needs. I think it hurts the design a bit when you know that there are much better looking versions of the card out there. Like, I know that there is a Matt Duchene Fabric of the Game card that will have the whole white part filled up with jersey or patch. I wish I had that one! But too bad, I have this one.

Overall in terms of inserts, I think if you aren't too picky and just like getting game-used, serial numbered, and autograph stuff, Certified will fulfill your need just fine. Most of the these hits will not be very satisfying though in terms of wow factor. That's how I felt when I got mine. Most will just have very small pieces of jersey on bland to 'ok' designs. It's nice to get hits, but I wish they were I were more fulfilled by them.

Inserts/Game-used/Autos Score:
7/10
Overall Rating -
Panini does a respectable job out the gate with Certified. I think there was a lot of hype and hope coming with this release. I don't think Certified blows Upper Deck out of the water with this release, but they come out with a solid offering at a decent price point. Knowing Panini from other sports products, this product falls into line with all their others.

I'd recommend buying some of this product and see how you like it. Boxes that I've seen broken have been very hit or miss. I personally think I got hosed on my second box, but it's still a fun product to open. Let me know what you think of it!

Check out the video from youtube of my first box of Certified opened at the Hobby Box:
HERE
Posted by luke. at 5:06 PM