Base Card Design -
Upper Deck has definitely nailed its Victory brand 'look'. This years offering is different, but definitely does not fall far from the tree in comparison with other Victory sets from years past. The cards are white bordered with angular bright colorful graphics on them. I think that the cards look very clean and simply designed. They are not exciting by any means, but they are serviceable for the cost. These cards do the job, and that's about it. They feature a nice large picture of the player on the front and highlight their team's colors. If I were a kid, these cards might appeal to me. It's easy to find the players I like since they are so inexpensive. On the back, there are stats up to 5 years back. The usual information about height, weight, and stuff are all there. I would have liked to see some blurb about the player on the back though. I remember as a kid loving to read the backs of cards. Any little bit of info would have been great to add to just the stat information. As a kid, I didn't really understand all the stat information, but I could read something cool about players I wanted to find out more information on them. Upper Deck... think of the poor children! 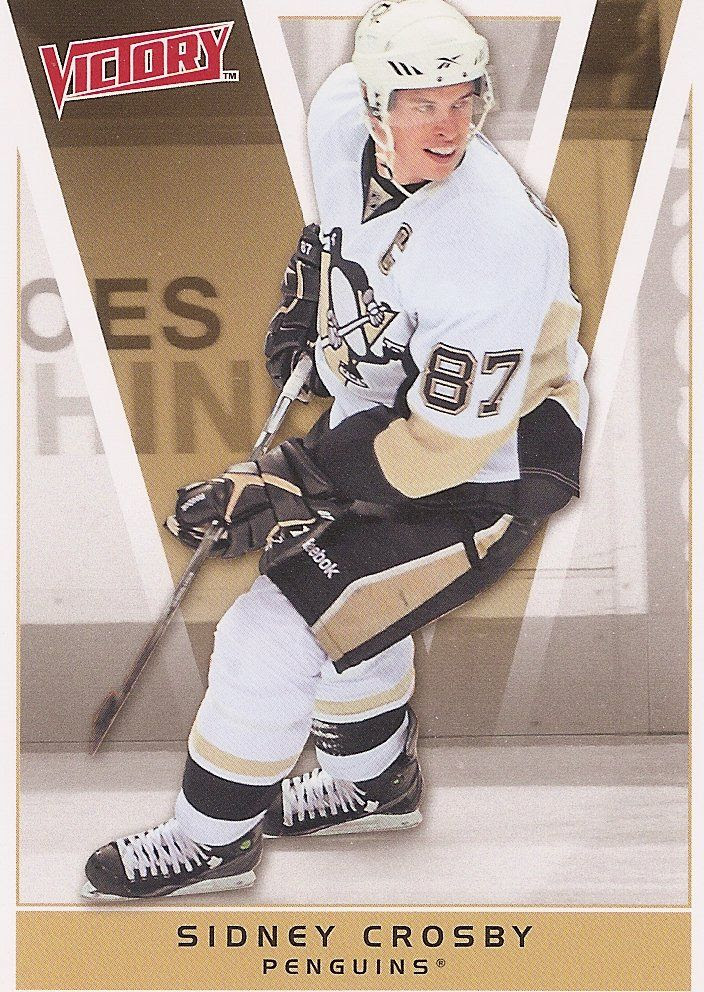 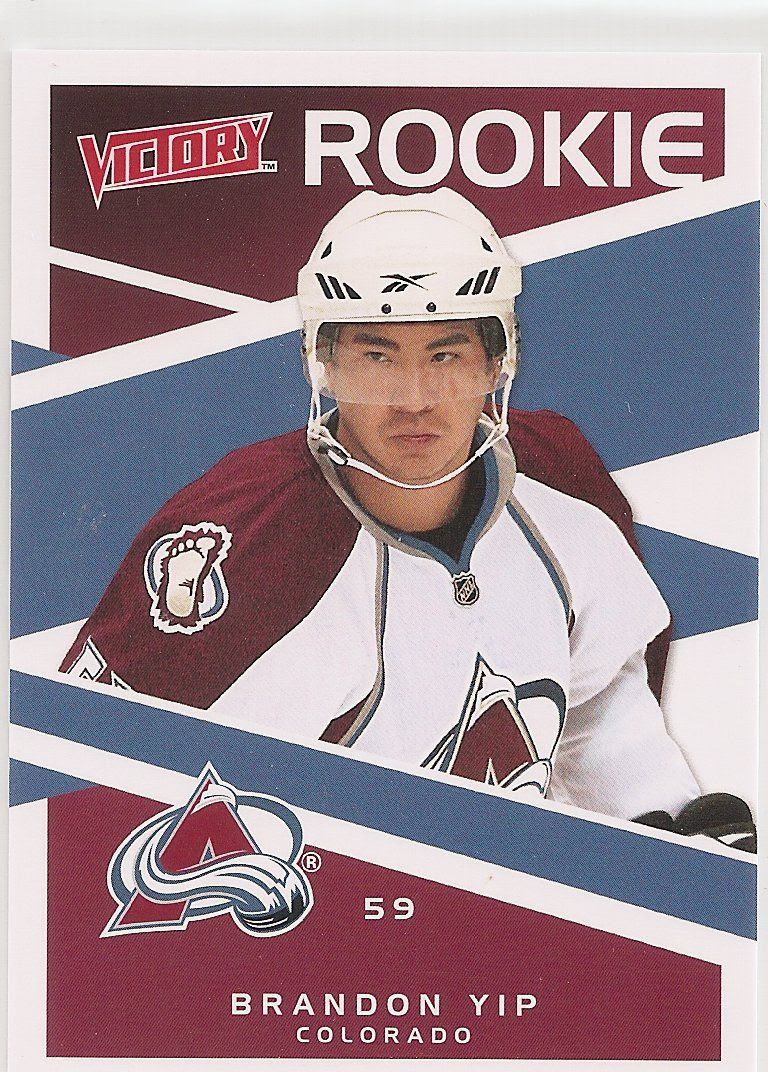 The Victory rookie cards are similar to the regular base cards. They feature white borders and team themed graphics. The rookie pictures seem to be more zoomed in to them rather than a full bodied action shot. Some of the graphics block part of the player. Unlike the base cards, the rookie cards do feature a little bit of information on them in written form. It's neat to learn a little bit about the rookie crop in this way. The card I have pictured for you is Brandon Yip from the Colorado Avalanche. I chose him because he's 3/4ths Chinese and 1/4 Irish (found out from his Wiki Page). Not too many of that mix around the NHL!
Base Design Score:
6.5/10
Inserts/Game-used/Autos -
I bought a hobby box of Victory for about $20 from my local card shop. Usually I wouldn't of even touched the stuff, but it seemed like a good deal for 36 packs. Well, unfortunately, Victory does not come with a whole lot of inserts to chase after. In my box I received one gold parallel card, a bunch of Game Breaker Inserts, and a bunch of Stars of the Game inserts. THAT'S IT. I definitely would not have paid $20 for what I opened up from my box, but that's always the risk you take in this hobby.

The gold parallel insert is pretty rare I guess. You only get one per box. For being a semi-tough pull, it sure doesn't stand out very well at all. The only thing that sets it apart from a regular base card is that it has gold colored border and highlights. For a card that only comes one per box, I think it should have a bit more cool factor. Well, I don't see these cards being worth too much. Even with a big base set, getting the one you want on eBay shouldn't cost that much granted someone actually puts it up for sale there. My box came with Jordan Staal from the Penguins. Here he is! 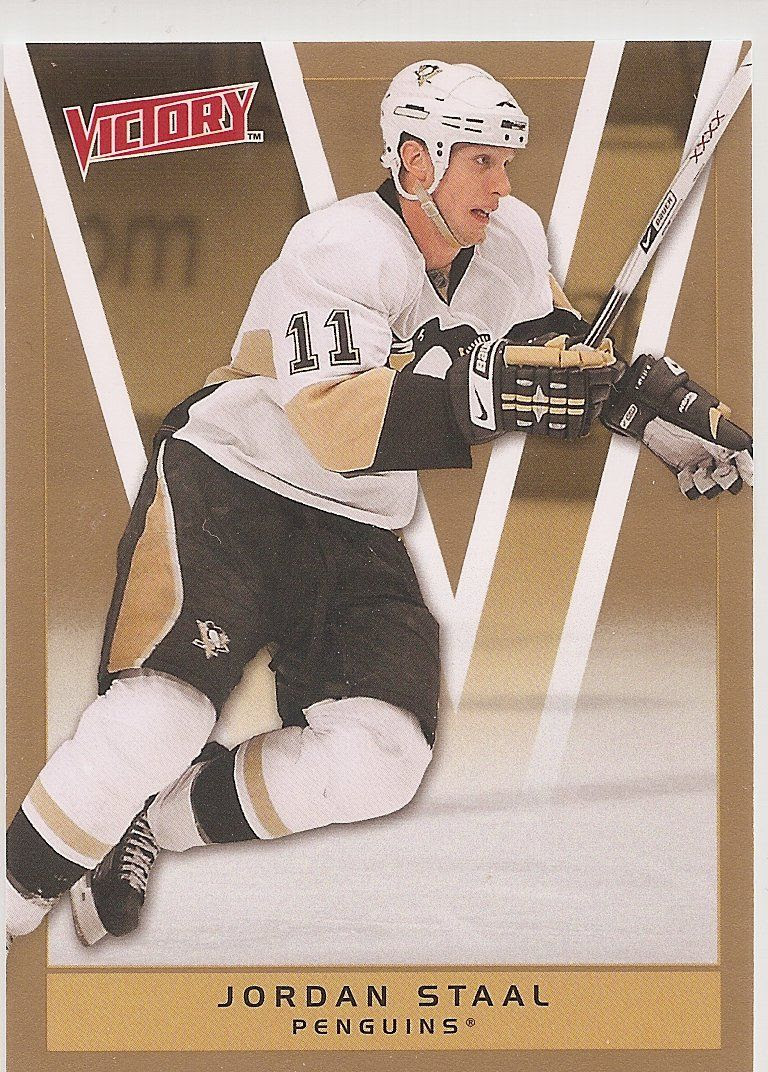 The Game Breakers Insert cards are horizontal and have a non-white, borderless design to them. These cards sort of remind me of some of the inserts that came one per pack in the 90's from Fleer for some reason. These cards stand out to me because they are dark and flashier than the usual Victory card. It's kind of neat, but nothing that is really great. These will be easy cards to pick up of your favorite player. 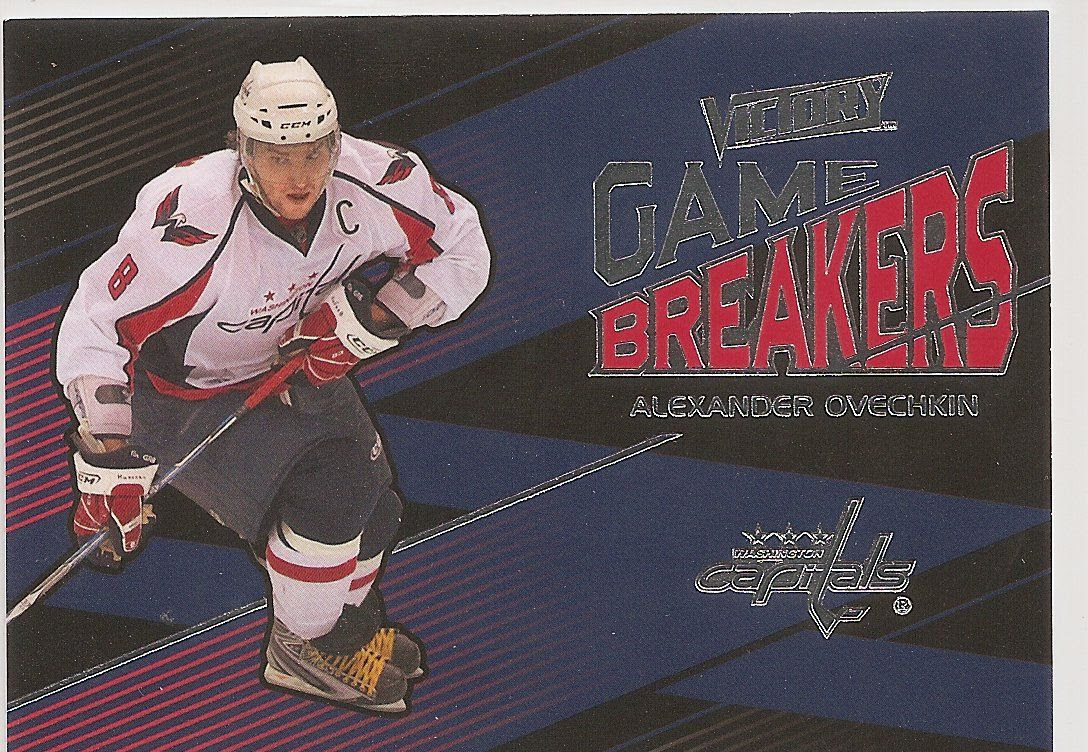 The Stars of the Game inserts are much more in line with the Victory design than the Game Breakers. Again, a very clean look accompanies the player. It features a white background with some zig zaggy lines. Very clean, almost clinically so. If this card came on thicker card stock I think it'd be a really nice card actually. Here's Joe Thornton of the Sharks. I got him in my box. 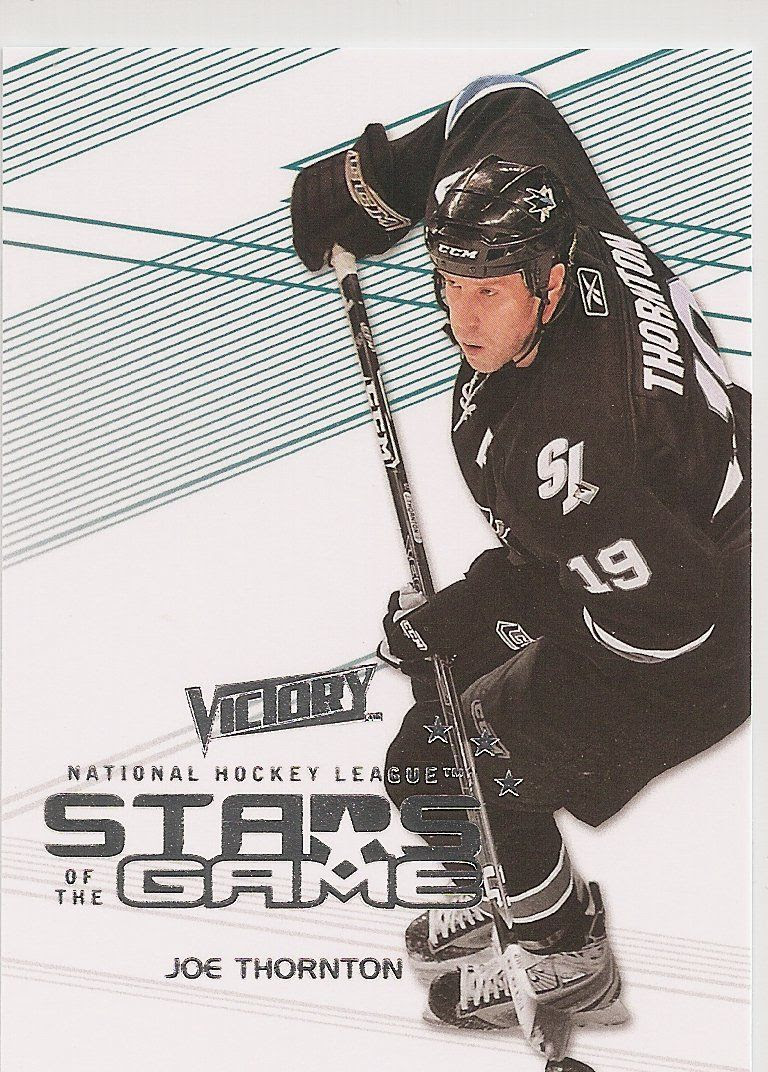 Besides the inserts that I got in my box, there are a few other parallels that you can pull from Victory. I think it'd be crazy to try to chase them though. There are black versions of the cards from the set. The odds of pulling these are more than one in seven hundred. Rookies are even more difficult at one in two thousand eight hundred and eighty. Thought these cards are scarce, I'm just not sure how many people will even want to try to get them. Retail packs contain red versions of the cards. I hear that these are pretty popular to collect. I haven't seen one yet because I live in a market (Sacramento, CA) that has little to no hockey products anywhere!

Inserts/Game-used/Autos Score:
3/10
Overall Rating -
It's hard for me to recommend Victory as anything but an easy set to collect set. This card set might be fun for kids... maybe. But the things is you can't find any cool jersey or autographs here. I hope one day Upper Deck will come out with something worth pulling out of Victory other than the extraordinarily difficult black inserts. For now, it's just a beginning of the year set that will be forgotten once any other cool product comes out.